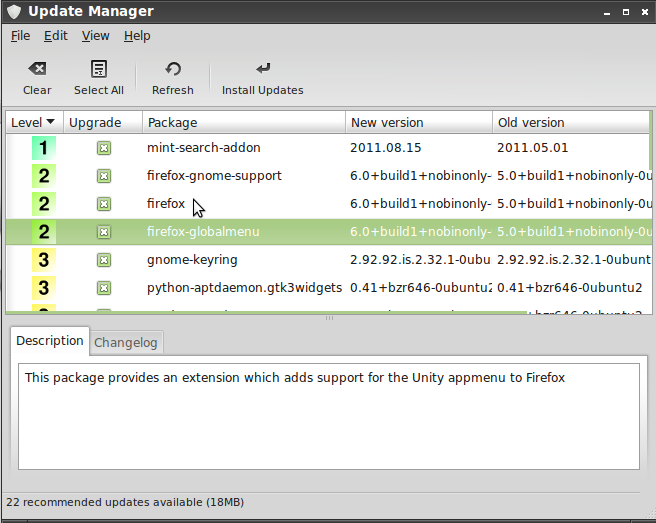 Linux Mint is a desktop-centric distribution based on Ubuntu Desktop, and Linux Mint LXDE is the edition that uses the Lightweight X11 Desktop Environment (LXDE). The latest release, Linux Mint 11 LXDE, was released August 16, 2011. This article presents a review, the first for an LXDE-based Linux Mint edition on this website.

The installation image is a Live CD, and installation may only be started from the Live environment. Shown below is the boot menu. 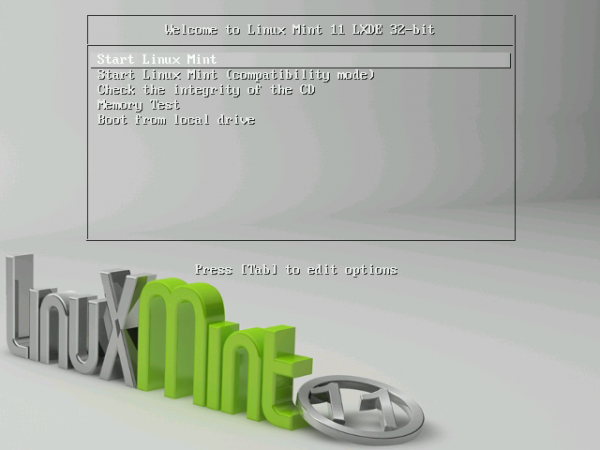 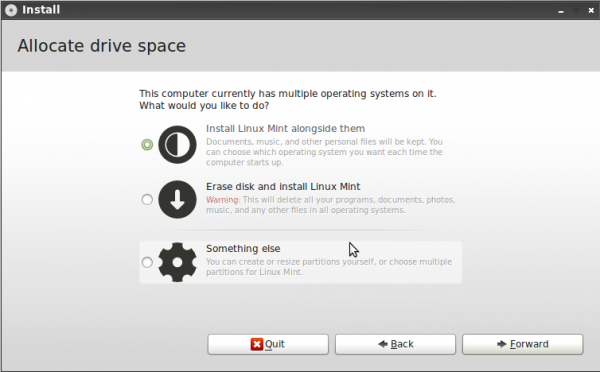 Even in the advanced partitioning window, you could not tell that two Linux Mint editions were already installed unless you view the entries in the “Device for boot loader installation” dropdown menu. 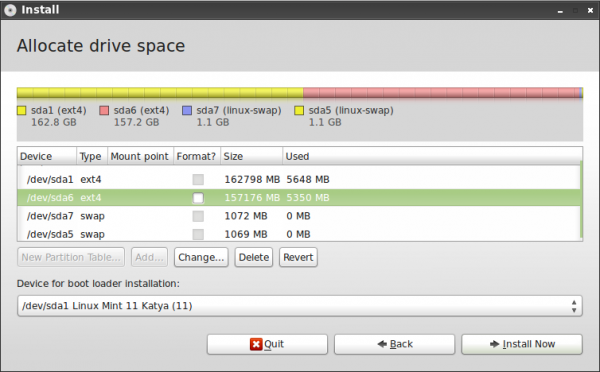 And on several occasions, attempting to edit a partition caused the partition editing window to freeze. Restarting the system was the only option. My impression of the installer is it is a little bit less stable than the main edition’s.

The default file system is ext4, a journaling file system. Other journaling file systems supported are ext3, jfs, xfs, reiserfs and btrfs. LVM, the Linux Logical Volume Manager, RAID and disk encryption, are not supported. The minimum disk space recommended for installation is 3.8 GB, but a new installation takes up less than 2.9 GB. GRUB 2 is the boot loader. The installer does not have an option to password-protect it.

Desktop: LXDE is a low resource-consumption desktop environment. Just like Xfce, it is fast and very responsive. The menu style is the classical type. Linux Mint’s mintMenu application is available for installation, but it appears that it is not compatible with LXDE. mintMenu is a menu style similar to Lancelot, a menu application for the K Desktop Environment. 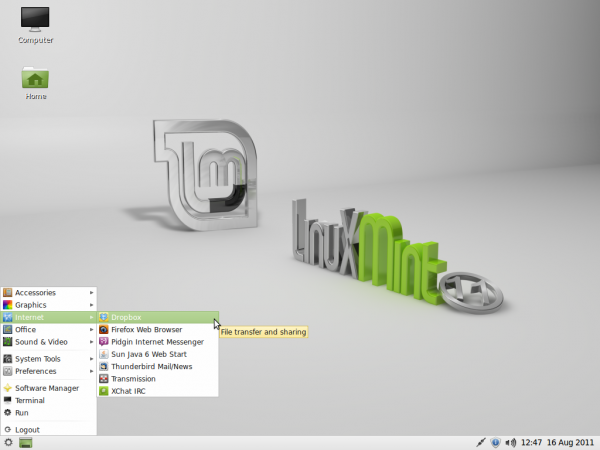 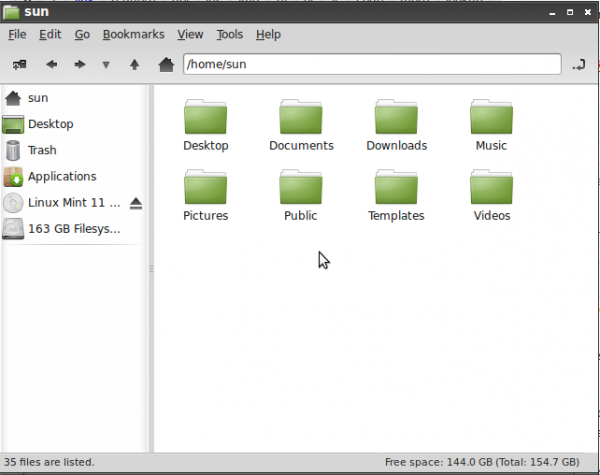 And that feature, the ability to browse the menu entries, and launch applications, is the shown in the image below. Access is from Go > Applications. I think it is nice. 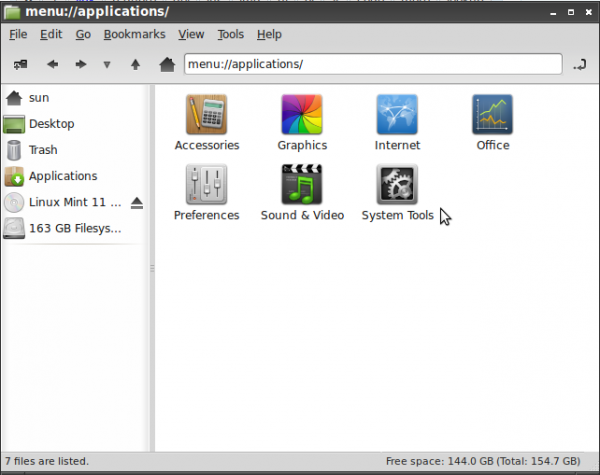 A feature of this edition of Linux Mint that it inherited from Ubuntu, is the Ayatana Scrollbar, also know as the overlay scrollbar. It is supposed to “improve the user’s ability to focus on content and applications” and to “ensure that scrollbars take up no active screen real-estate” thereby “reducing the waste of space and distracting clutter that a traditional scrollbar entails.”

After applying updates, Firefox 5 was upgraded to Firefox 6. Multimedia codecs and libraries required to view Flash and Java content, are installed by default. Libdvdcss2, required to play encrypted video DVD movies, is also installed, so VLC plays those movies. There is no full office suite installed, but LibreOffice and OpenOffice.org (now Apache OpenOffice.org), are available for installation.

As with all Linux Mint editions, there are no games installed, but there are more than 100, including six FPS games, available for installation. All these applications are, of course, besides the usual set of desktop accessories and system utilities.

Package Management: Like all Linux distributions directly or indirectly derived from Debian, Linux Mint LXDE uses APT, the Advanced Packaging Tool, for application management. While apt-get, the most commonly used APT command line utility is very easy to use, there are two graphical applications that are pre-installed to make software management even easier.

Because the Software Manager does not allow true queuing of applications for installation, it is better to use the Synaptic Package Manager when you want to install multiple applications. 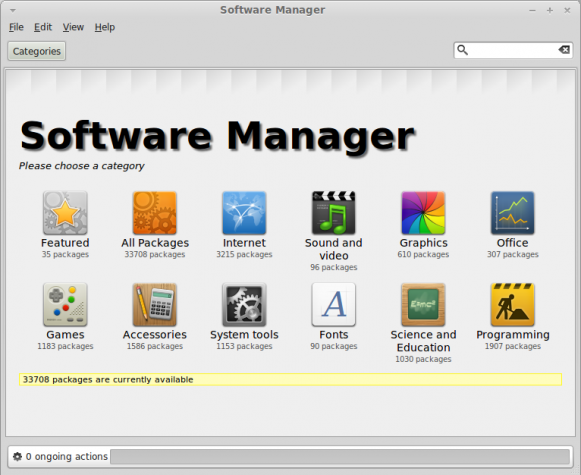 This is the Internet category view of Software Manager. Out of the box, the system is configured to check for update once per day, and the Update Manager works. 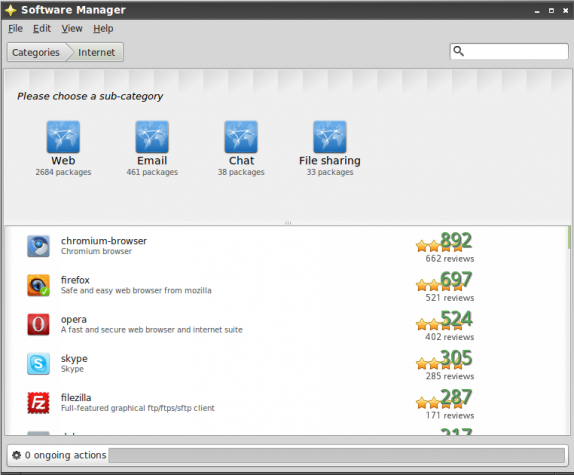 Shown is the list of updates in the Update Manager. This screenshot was taken today (August 22, 2011), six days after it was released. At the time, there were a total of 22 updates available for installation. 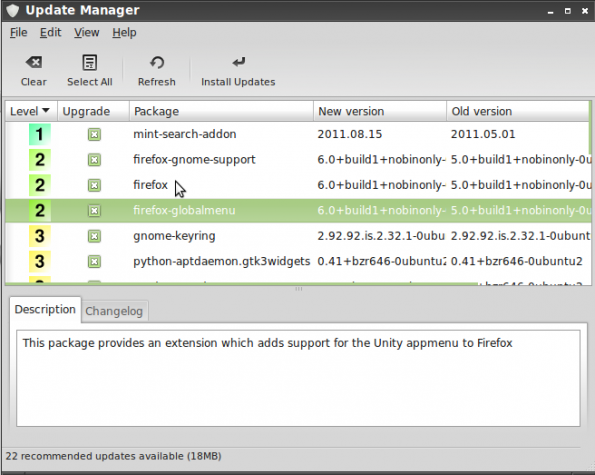 Certain gui panel apps like “CPU scaling monitor” and “System Monitor” I find extremely useful in gnome; though which seem dysfunctional in lxde. Will these things ever improve? Are there any other option? Also, I had great difficulty moving panel apps to specific locations on the panel. I found this aesthetically bothersome.

Aside from that, I was very impressed with my trial of lxde, and would love to use it full time – but for a few minor flaws.

Don’t expect things to work in LXDE and Xfce the way they do on, say, KDE and GNOME. Some aspects of LXDE and Xfce are still behind the curve.

There is one thing I miss in all your reviews I read up to now: Is it possible to use 2 monitors in extended desktop mode?

I see no reason you shouldn’t. But thanks for bringing it up. I’ll incorporate that aspect into future reviews.

This works fine on multiple monitors (up to 5). The grandr application is very helpful for that.

Having hopped through at least 10 distros — I have found this one (Linux Mint LXDE) to have an excellent balance of lightness, stability, and adequate included features.
Debian LXDE was extremely disappointing – packed with out-of-date software, and no GUIs for managing either network connections or Asian languages.