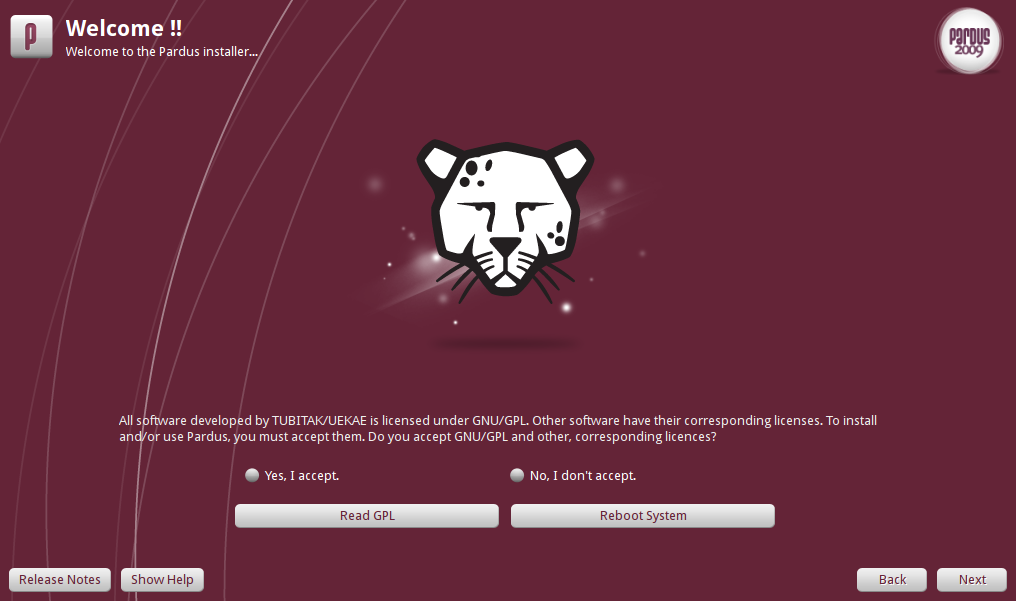 Pardus is a Linux, desktop-oriented operating system developed by Onur Küçük and his team from Turkey. At a time when nearly every new Linux distro is based on or derived from Ubuntu, Pardus is a rarity. It is an original, not based on or derived from any other distro. As such, its package manager and graphical management tools are custom-developed. This article is a review of Pardus 2009.1, the latest stable release.

…. That’s all you get with Pardus as far as disk partitioning goes. You do not have the luxury of creating other partition types (/usr, /var, /tmp, etc) that we are used to on a UNIX-like operating systems.

By default, the installer creates just the system partition, with ext4 as the filesystem type. A complete installation takes up just about 3.6 GB of disk space. The bootloader is the GRand Unified Bootloader (GRUB).

Desktop The default desktop environment on Pardus is KDE, the K Desktop Environment, and Pardus 2009.1 ships with KDE-4.3.4. KDE4.3.5, released on January 26, 2010, is the very latest KDE update, but that was not available in the main Pardus repository at the time of writing.

After rebooting and logging in to a fresh installation of Pardus 2009.1, the first application that graces your desktop will be Kaptan. Kaptan (Turkish for Captain) is a welcome application, but unlike mintWelcome, Linux Mint’s Kaptan equivalent, you use it to customize various aspects of the operating system – the mouse, theme, window behavior, network profile configuration, etc. Kaptan has its usability issues, but this is the type of application I’m looking for on Linux and BSD desktop distributions. It’s not just useful for first time users, but even seasoned users will find Kaptan a very handy application.

The default menu style is the kick-off type. Lancelot and the Classic menu style are the other two types available. You may change the menu type from Kaptan or if your are using the Kick-off menu, you may switch directly to the Classic menu without launching Kaptan.

Administration Pardus uses the traditional root user account for managing the system. There are graphical tools for managing just about any aspect of a Pardus installation. Although they do not have some of the advanced configuration options available on Mandriva graphical management applications, Pardus’ tools have a clean, uncluttered and intuitive interface. A first-time user will find them easy to understand and use.

After installing an application, Package Manager prompts you to start the application by double-clicking on the application’s name in a small window. This is a neat feature. It means that after installing an application, you do not have to go hunting for it in the menu. Is there any other graphical package manager with this feature? As much as I like this feature, it has it’s drawbacks. For one, when you double-click to launch the newly installed application, the window remains open until you click the “Ok” button. I think its better – in terms of user experience – to automatically close the window after or as the application in being launched. Another thing, the text informs you that an entry for the new application has been created in the menu, but doesn’t tell you exactly where. While it is easy to figure out where an application like Firefox will be in the menu, others are not so easy to locate. If I were Onur Küçük, I’d change the text in the window from:

Default Installed Applications Pardus comes with a decent select of applications. In addition to the usual assortment of native KDE applications – Konqueror, Akregator, Okular, etc, the following are also installed:

Like Linux Mint 8, Pardus does not have a single game installed. There are, however, 160 games in the main repository. So you can install any one or even all of the games if you are so inclined. And these are not only 2D card games, but 3D, FPS, and MMORPG games like alienarena, AssaultCube, AstroMenace, blobAndConquer, blockout2 (3D Tetris games), daimonin, etc.