Browsers and Browser plugins Konqueror, the native KDE file and Web browser, and Firefox (version 3.5.7) are the two browsers installed. Firefox will do Flash, speak Java, and handle just about any other multimedia content you throw at it. As a Web browser, Konqueror is just about the slowest. However, if you ever need to go fish-ing, or need to spoof a browser’s identity, you’ll find Konqueror to be an invaluable application to have.

Security tools and Network Manager Aside from the firewall, which is not even enabled out of the box, there are no other network security tools that I can see installed on Pardus. Where a distro like Mandriva has MSEC regularly monitoring a Mandriva installation for security breaches, there is no equivalent application on Pardus. There are no VPN applications installed. However, kvpnc, openVPN, pptpclient, and vpnc are in the repository. OpenSSH server is installed but not enabled. Read how to enable OpenSSH server on Pardus 2009.1.

Media and Hardware Detection This is where KDE has taken a step backwards – in my opinion. When I insert an audio CD into my computer’s optical drive, most likely, I want to listen to music, and I expect my PC to launch the appropriate application. On Pardus 2009.1, you get this dialog window, after clicking on the device’s name in the Device Notifier. But all I want to do is listen to music. Ok, from the list of applications proffered, I can choose KsCD or Amarok. You’d think that Amarok would be the best application to listen to an audio CD, but you’d be wrong. Amarok has become too complicated to use. Trying to listen to an audio CD using Amarok involves many more steps than is necessary. 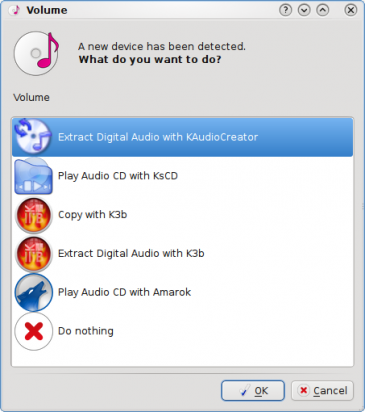 Audio prompt when an audio CD is detected

If you just want to listen to an audio CD, try KsCD. It does one thing and does it very well, and it has a simple and uncluttered interface. It looks more like an application that a Pardus developer would create.

How does Pardus respond when you insert a video DVD? Before you get the dialog window below, you have to click on the name of the DVD in the Device Notifier. Why doesn’t this dialog window pop up without an action from the user? One of the options available is “Download Photos with digiKam.” Seriously, is it really possible to download photos from a video DVD with digiKam? 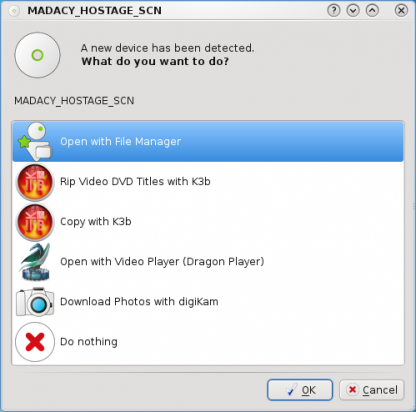 Video prompt when a video DVD is detected

Ok, so some people would want to do something other than listen to an audio CD or watch a video DVD. Agreed. In that case the dialog window, with all the available options, is essential, but not “Download Photos with digiKam” when the media is a video DVD. I expect the system to be smarter than this. Even though this is a KDE issue, some of these default configuration ought to be modified by the distro developers. There is more to be written about this subject, but let’s save the rest for a different post.

If you must know, libdvdcss is installed by default, so Pardus will play your encrypted (commercial) DVDs.

What needs to improve?

Hopefully I will not be writing about these issue when I review Pardus 2009.2. Or should that be 2010?

Resources Home page. Download 32-bit iso images. Pardus 2009.1 iso image “is a Hybrid Image that can be burned on CD’s or DVD’s or that can be transferred to a media such as a USB memory device or an SD memory card.” Note that Pardus does not currently have support for 64-bit systems. According to Onur Küçük, the lead Pardus developer, “Work is ongoing on the 64-bit version and a developer preview ISO will be made public soon. Probably the end user version will be made public towards middle of 2010.”

Greetings. I follow your site to wish you continued success.

I must say that Pardus 2009.1 Anthropoides Virgo is the nicest ‘Linux’ distro I’ve tried. (Why are SO many ‘Linux’ GUIs so nauseatingly gaudy? What’s wrong with good old clean windows & trees & plain screens, like those on Bluebottle or Haiku?)! The installation procedure is very straightforward, with some excellent set-up options, which must be a FIRST for ‘Linux’ (who would do well to learn a thing or two from Pardus).

But, that’s where it ends.

Once again, there’s the unnecessary & irritating password/priviledge-denial system. WHOSE COMPUTER?

Once again, there’s the lack of peripheral hardware compatibility, because it cannot run either executable (exe) installers or CUPS, & its own PiSi installers don’t seem to run offline.

So, the best I’d have would be a very pretty, slow-booting, static stand-alone, with few resources, & without mobile broadband or printer, on which I’d have to use Wine to run most things – badly – that’s if Wine would even install.

It’s not going to woo me away from my VERY fast, VERY compatible, debloated, debugged & ‘regedited’ XP fitted with excellent software libre from people like Sun (OOo etc.). By the way, my PC is a tool rather than a toy.

I have a VERY reliable, portable machine that does WHAT I want, WHEN I want, that rarely freezes or crashes, that I can keep clean easily, on which I can install/uninstall software/hardware/drivers without spending hours in terminal. Is this TOO much to ask of an OS? Are my criteria TOO lofty?

When the blindly idealistic ‘Linux’ nerds get their act together & come up with a genuinely stable, reliable, user-friendly, software-compatible OS, that’s not obsolete/replaced/no-longer-supported-after-6-months, rather than focusing on eye-candy, I MAY take another look.

But, after nearly 3 years of trying ‘stable’ ‘Linux’ distros that crashed by default, & did little more than leave me nauseous, greatly displeased & sorely vexed, this is not very likely. Some of my best friends swear by ‘Linux’: I can’t see why.

Pardus came VERY close to persuading me, but like its ‘cousins’ it failed on a couple of simple things. Nice try, but not good enough.

I think you need a Vista computer if Pardus will work good.If you install it in a XP computer the memory and so on is to weak. KDE is not so easy driven system as XP.And for the passwords just go in to the system settings and change to automatic log in.
And for the Wine. Best option is just to avoid it. Choose program who is developed for Linux instead.

The best english forum for Pardus user is this:
http://worldforum.pardus-linux.nl/index.php

Try Linux Mint8 Fluxbox it is an amazing piece of work.i can only say WOW

Pardus 2009.1 have problem with sound in my computer(and in others to if I read Pardus world forum), but in another PC sound is normal.
2009 version had trouble with the network in some Pc.s. I think they test process is to short. Between Alpha, Beta and the release its only 3 weeks or so. Mandriva has much longer process. So thoose problems I mentioned not happend in that distro.

The main problem I have with some of these distros is that there is an urgency to post to Distrowatch. I wonder if some of them even have beta testers.

I’ve also noticed that after running Kaptan, the panel ends up at the top of the desktop, you’ll have to move to the bottom if you like, which sometimes becomes a problem. I’ve found several problems with this distro, it’s not quite ready yet.

I did not have that problem during my test. Other than that, what are the other problems you had?

Well, when I tried to the panel to the bottom of the desktop, it did not show the option to move, but simply froze up, but after continued trying, clicking on the cashew, it finally allowed me to move it. The update manager was not very responsive in that it did not seem to want to perform the update activity. I installed an application, but had to set it manually with the menu editor. I became frustrated with it and put mandriva back on my system.

You did not have to remove Mandriva. This distro is not yet at the level of Mandriva. The update manager is not very dynamic. I expected it to update immediately, but it seems as if the update will only apply at the set time interval.

Yes, you’re right as usual, I removed mandriva because I am not very well verse on dual booting linux os, for instance, ubuntu, mint, etc. will not allow you to install them next to another os, as there seems to be someting wrong with grub2. It’s not like mandriva, but installing some os after having mandriva installed will remove it from grub, so I just re-install mandy. I know that I’ve got some learning to do.

Also, previous settings done by kaptan, such as the network settings did not maintain there settings setup by kaptan.

I mentioned that Kaptan has some usability issues, but did not go into details. That itself is the subject of another post. I’ll suggest that you articulate the issues you had with Pardus in a Forum post. That will serve as a kind of bug report for the devs. They need this kind of service too. A forum has been created a just for Pardus. Hopefully one of the devs will stop by ….

Yes, I will be sure to do that, thanks as always you’ve been most helpful.

By the way, I have been searching for more articles and how-to to customize mandriva gnome but I’ve found that information about mandriva is very sparse, except on the mandriva site, which discusses mainly kde. I enjoy learning good and safe ways to setup my desktop. When you have time, would you give me some suggested reading or maybe you can suggest some ideas about how you setup your desktop personally. It’s fun to try things out. Thanks

What aspects do you want to customize? KDE has been a disappointment. I no longer use it. The good thing about these desktop environments is that I can install a KDE app on GNOME and vice versa.

There are KDE apps that I just have to use, and those I install on GNOME or Xfce if that is what I’m using. Btw, Xfce is charging ahead of GNOME. It has it’s drawbacks, but I like what they are doing. Waiting for their next update.

I’m mainly thinking of things like you do with other distros, but I am aware of the fact that mandy is pretty good by default. I like to find ways to be more productive, have the right (if there is such a thing) apps installed for when I may want them. Maybe I’ll give XFCE a try, I do like it, as I used it on slackware for a while. I’m just wanting to learn as much about my chosen os as possible. I like to have Real Player available, but gecko or totem plugins will not render trailers at http://www.film.com. So, I figured out that I should leave totem plugins in place as gecko will not allow, then I install RealPlayer rpm from the site and everything works perfectly. Thing like this are what I’m interested in learning, so I keep trying.

The reviewer should take a look at Lancelot, which is one of the so-called “kdeplasma addons” and which a default Pardus installation includes. When you go through the post-installation wizard (Kaptan? I’m not sure) one of the default desktop arrangements includes Lancelot in lieu of the standard KDE menu.

The Mandriva menu shown above is cluttered-looking and the tooltip doesn’t improve matters any. Mandriva’s customizatons of the KDE menus – going back many years before KDE 4.x have always been simply dreadful and counterproductive. Who needs to go through even more submenus to find the application they need?

A roadmap was announced a few months ago. I’m only a volunteer.

Pardus is developed by the Scientific & Technological Research Council of Turkey. It’s a government supported distro. Onur Küçük and his team are main developers.