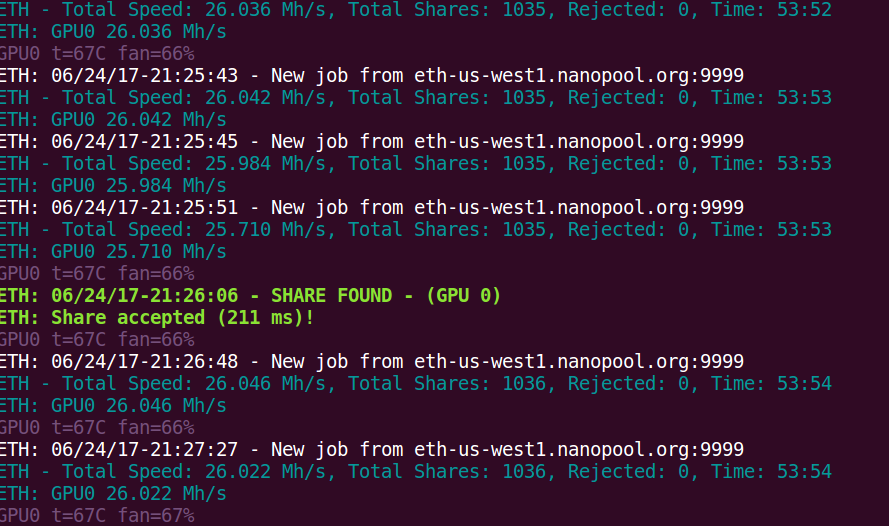 I’ve been mining Ethereum for the past week or so using an Nvidia GeForce GTX 1070. Expensive GPU, but it’s silent in operationruns very quite. In this post, I’ll share with you the hashrate I’ve been getting since I started mining.

I started mining using the Claymore Daul miner on Nanopool, but just using it to mine Ethereum. Hope to give dual-mining a try, but that will have to wait for now.

Figure 1 shows a graph of the mining operation from the Nanopool service. The solid, dark line is the reported hashrate, which is steady at about 26 Mh/s. That’s about the high-end for n Nvidia card with 8 GB of RAM, but slightly less than reported hashrates from similar AMD Radeeon cards. 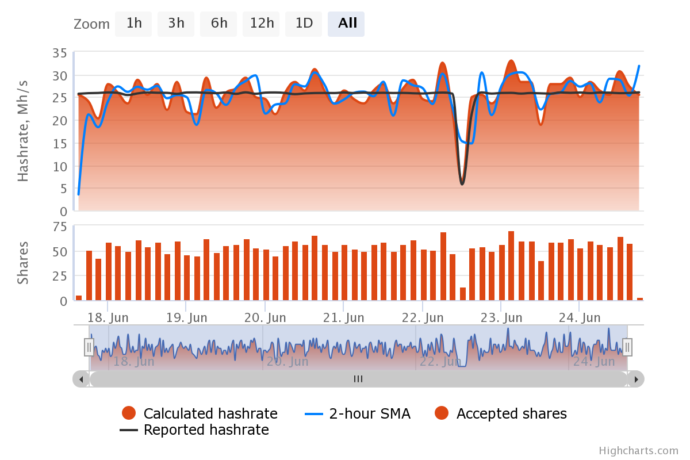 The same hashrate is shown in Figure 2, taken from the command line of the Ubuntu 16.04 I was using. The value can dip to just over 24 Mh/s, but generally remains just around 26 Mh/s. The maximum temperature I’ve recorded so far is 71 °C, and it generally remains around 66 °C. Fan speed stays around 66%. Except for the few times I had to stop mining, indicated by the v-shaped dip in Figure 1, the card has been stable. Never crashed. I’ll be buying a few more cards to add to the rig, but at the moment, this is a 1-rig mining operation. 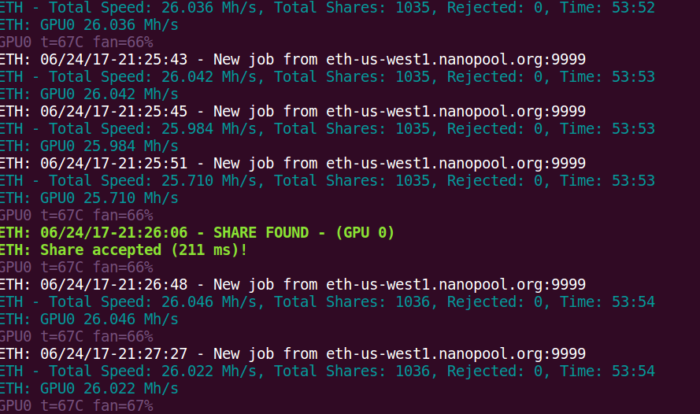 finid, is this still profitable, the type you are speaking of above?

I’d like to get into mining, yet too late for me to hop onboard, only have a single GTX 1070 in one rig, although have a pair of 6 GB 1060’s. Should had hopped onto Bitcoin when 10 cents per coin when invited by the founder (presume funds to purchase hardware), I thought it to be a scam. Had I invested just $100 (or even $50), at it’s peak, would had earned enough to buy a new home & truck. That’s the tricky thing, knowing what risks to take. Will regret not doing so the rest of my life.;-) Yet I’ll be on the lookout for future investments.

My intentions are leaning more towards investing in startups, there’s been a few new once since 2017 that requires minimal initial investment ($100 or so). I’d rather start with what I can afford to lose, rather than drop everything I have into it. May split across two funds for diversification, then add more as I see fit.

It would be hard today to break even when mining with a single GPU, unless one has somewhere other than home to run a PC 24/7. Such as a private office, where that employee has the key & can pretend it’s a small server for one’s position, if asked. In such a setting, where 50+ employees works, no one will notice the extra electricity used. And still, the profit will be small, unless getting lucky with a new fund.

Thanks for your article, as a Linux user myself, great to be able to do these things & much more on these systems versus Windows. Am not knocking Windows for Home users (other than being less secure), it’s just that I’ve been running Linux Mint since 2009 (version 7 or ‘Gloria”) & love it.

Not good for AMD cards though, having to rely on open source drivers sucks. One can add a PPA to get the latest NVIDIA drivers, may be one behind, yet that’s a lot better than featureless drivers. AMD should had released proper drivers for Vega (they may have, I don’t have a recent AMD card), as well as resuming proper support for still good running cards.

Any update on the Ubuntu tutorial with Claymore dual mining ?

I ran into a hardware issue that took time to fix, but I’m almost there.

Very interesting your article, and i am setting up my rig with 6 cards gtx 1070 evga,, and you can tell me where i find a tutorial to set up a linux mining S.O because i am tired to use windows it is very unstable.
I would like to mining , like yours , thanks Rommel Castro P

In about a week I’m going to release a custom Linux OS for mining. So check back in about that time.

how much you made monthly with that card? i’m planning on getting one but I´m not sure if worth it…

The price of eth fluctuates widely, so it’s tough to give a definitive figure. But based on recent prices, the estimate is between $90 to $165.