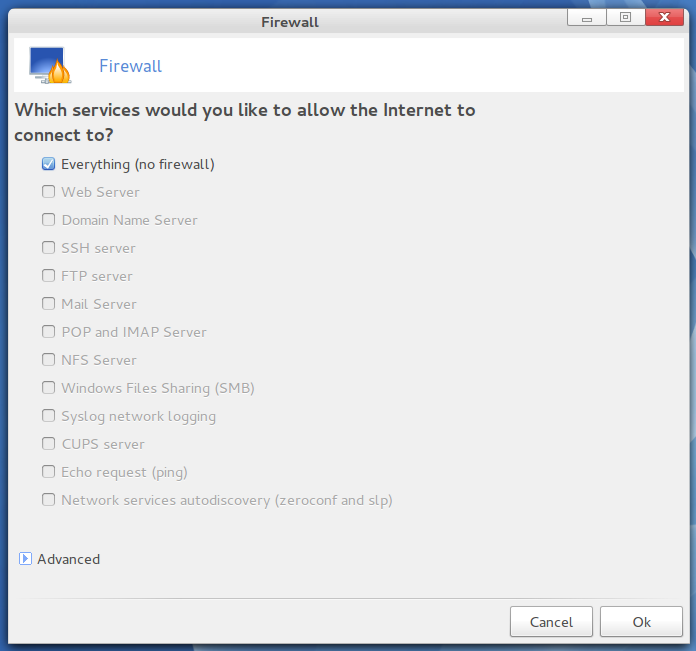 ROSA Desktop Fresh R2 GNOME review is a review of the latest edition of ROSA Desktop Fresh, a line of Linux distributions designed for end users. It is published by ROSA Laboratory, a Linux software solutions provider based in Moscow, Russia.

Aside from the Fresh line of distributions, the company also publishes the Marathon line, which is designed for business or enterprise users.

ROSA Desktop is one of several distributions that are derived from Mandriva Linux. The others are Mageia and OpenMandriva. The latter has more in common with ROSA Desktop than Mageia does; many applications developed by ROSA labs are available in the OpenMandriva repositories, but not in the Mageia repositories.

The Installer: All three distributions inherited the management tools that made Mandriva Linux one of the very best Linux distributions. The problem with some of those applications is that they still have the same shortcomings since their Mandriva Linux days. A prime and very prominent example is the graphical installer.

Its main weakness is the inability to encrypt a partition mounted at / (root), as shown in this screenshot. 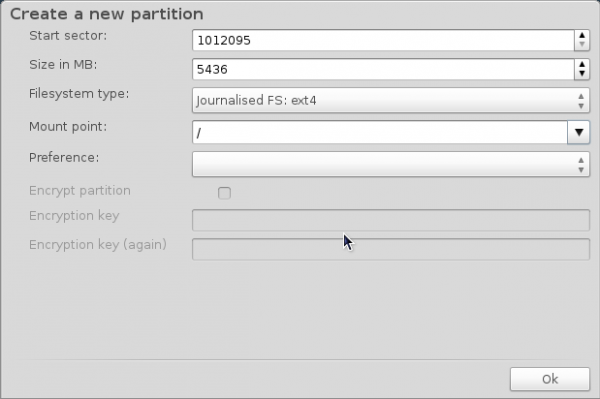 Another weakness is that it cannot automatically resize a partition and install the operating system alongside another one on the same hard disk drive (HDD). This screen shot was taken from a system with another OS on it, but you couldn’t by looking at this screenshot. 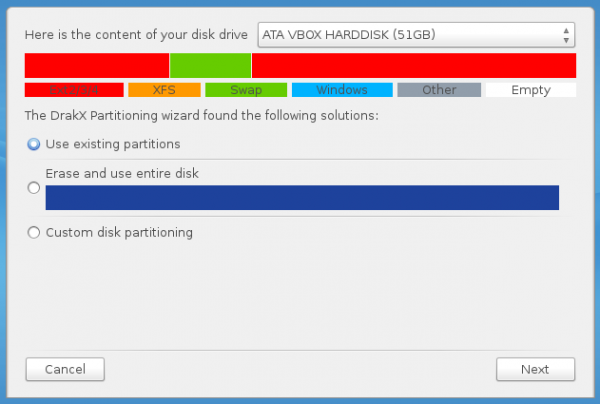 Those shortcomings aside, some of the changes that the installer has received from ROSA Lab developers has made it a bit easier to use. For example, your timezone is now detected automatically, thanks to the integration of a Geo-location service, similar to what users of Ubuntu have been using for sometime.

In the classical installer, certain services can be configured to start right out of the box. This screenshot shows the services enabled by default. 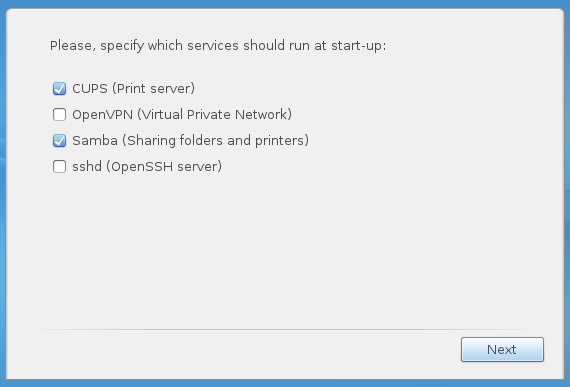 ROSA Desktop R2 GNOME Desktop: Before getting to the desktop itself, here’s a screenshot of the login screen. 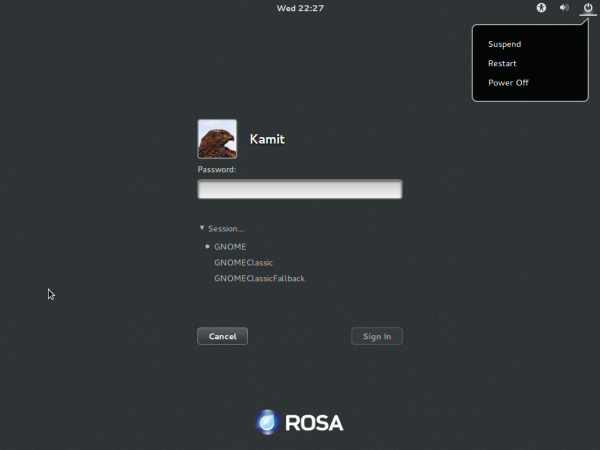 ROSA Desktop Fresh is supposed to be the line that ships with the latest and greatest (read: bleeding edge software versions), but ROSA Desktop Fresh R2 GNOME did not live up to that billing. Instead of GNOME 3.10, the latest stable version of the GNOME 3 desktop, you get GNOME 3.8.4. 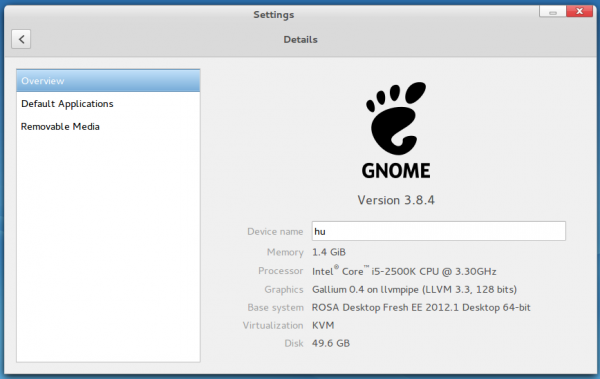 But even at that, it is the first edition of a GNOME 3 desktop with a default configuration that comes close to how I like a GNOME 3 desktop to be. The titlebar buttons are all in place, so if I want to minimize a window, a button is right there on the titlebar. It’s a simple thing, but it makes a world of difference. Application windows are even configured to roll up or shade on double-click. That’s just the way I like it. 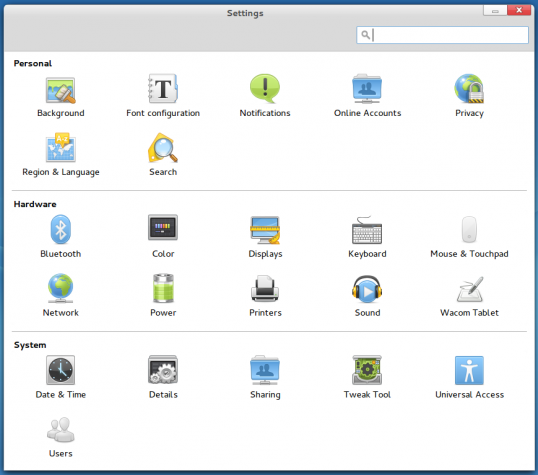 If you love beautiful graphics, you will love the theme and icon sets using on GNOME 3 edition of ROSA Linux. It’s beautiful. The screen shot shows the default desktop. 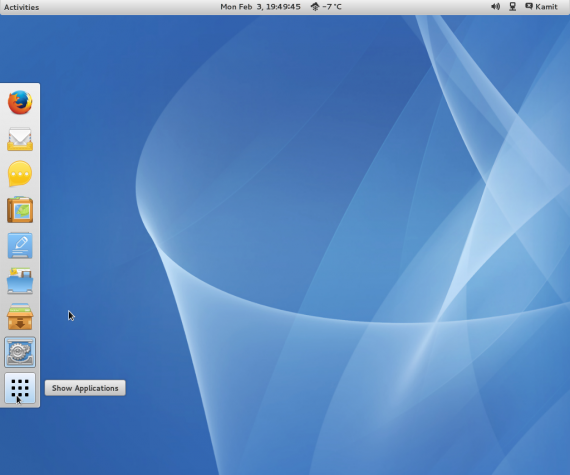 Click on any image in this gallery to view other aspects of the desktop.

The default desktop on ROSA Desktop Fresh R2 showing the user indicator. This is running GNOME 3.8.4.

The default desktop on ROSA Desktop Fresh R2 showing the weather applet. No, I’m not in Moscow That just shows the default weather location shipped from ROSA Labs.

The app view of the GNOME 3 desktop on ROSA Desktop Fresh R2 GNOME showing some of the installed applications.

The desktop on ROSA Desktop Fresh R2 GNOME showing the application menu. You only get this view if the app menu is enabled using the GNOME Tweak Tool.

The notification indicator of the GNOME 3 desktop as seen on ROSA Desktop Fresh R2 GNOME.

For customizing the GNOME 3-specific aspects of the desktop, the GNOME Tweak Tool is installed and integrated in System Settings. 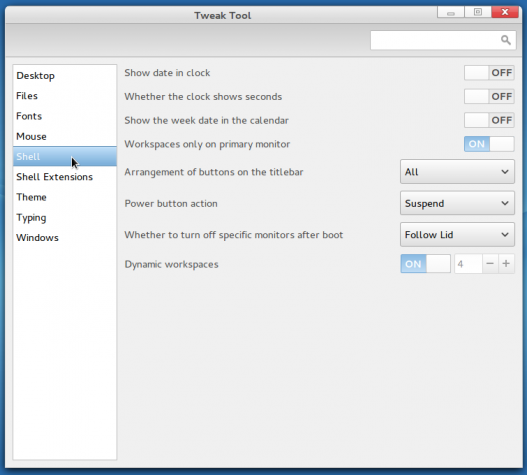 A few of the apps that make a ROSA Desktop fun to use are installed. For example, ROSA Media Player is the default media player, and it’s configured to handle all music and video files. Even though this GNOME 3 edition does not ship with the latest GNOME 3 desktop, the applications installed by default are the very latest. For example, Firefox 26 is the installed version of the popular Web browser. That’s the latest, stable version. And though not installed, Chromium 32 is in the repository. And that also is the latest, stable version of that Web browser. Other productivity applications that desktop most users would need are installed, although if you love playing desktop games, you are going to be disappointed because there are none installed out of the box, never mind that there are several dozen GNOME games in the repository. Valve Software’s Steam is also in the repository.

Installed and available applications can be managed via RPMDrake, the graphical interface to urpmi, one of the distribution’s package management command-line tools. RPMDrake is one of those applications the distribution inherited from Mandriva Linux. You will also find it on Mageia and OpenMandriva. This screen shot shows its main interface. 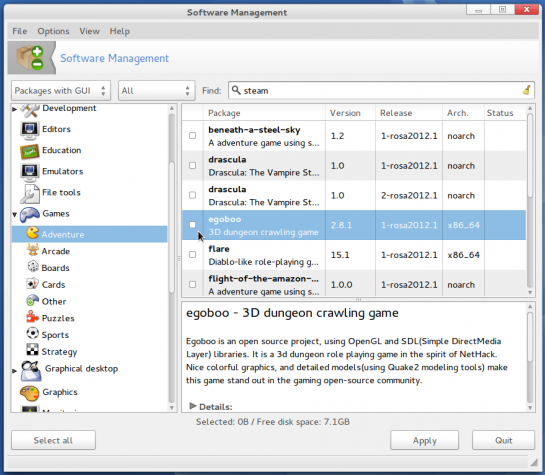 Aside from RPMDrake and its software update counterpart, the graphical hub for other system management applications is not installed. That means the command-line is the place to launch them from. Users of any Mandriva-derived distribution should be familiar with the tools I’m referring to. This screen shot shows a listing if all the drak tools. I don’t know why, but I’m sure the developers have a good reason for not packaging all the tools in their graphical hub. 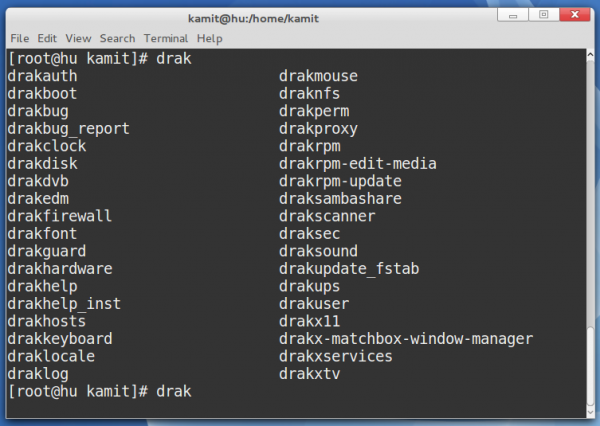 So to manage the firewall, you’d have to launch drakfirewall from the command-line. And if you do, you’ll find that the firewall is disabled by default. 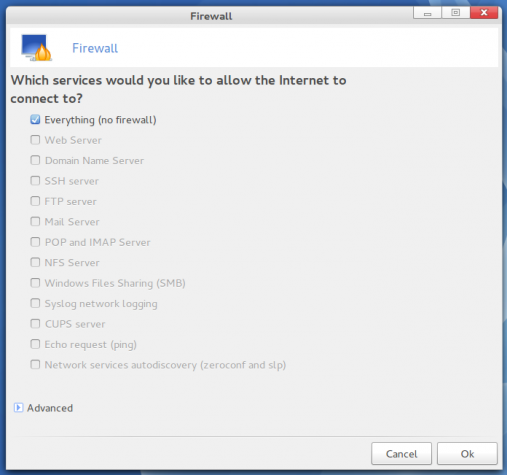 Having to start most system management applications from the command-line is the exactly what I expect on a desktop distribution at this stage, but, like I wrote earlier, I want to believe that there’s a good reason for it.

Aside from that, ROSA Desktop Fresh R2 is a beautiful distribution. If you can live with having to start most of its graphical system management applications from the command-line, it’s a highly recommended distribution for desktop computing.

Resources: Installation ISO images (32- and 64-bit) of ROSA Desktop Fresh R2 GNOME may be downloaded from here. You may also read the release notes here.

I am shamea non technical user but, adventure when it comes to trying a new systems like PCBSD yet, I had no Idea what its purpose or market of users it was aiming for. I have tried react OS of curiousity similarly there was lindows if got the name wrong forgive me, that project is I think dead, a shame it seem like there was potential. I will say if I could program I would buld a free OS that could run MS software and free. IT pros or progrmmers don’t listen to nnobs.