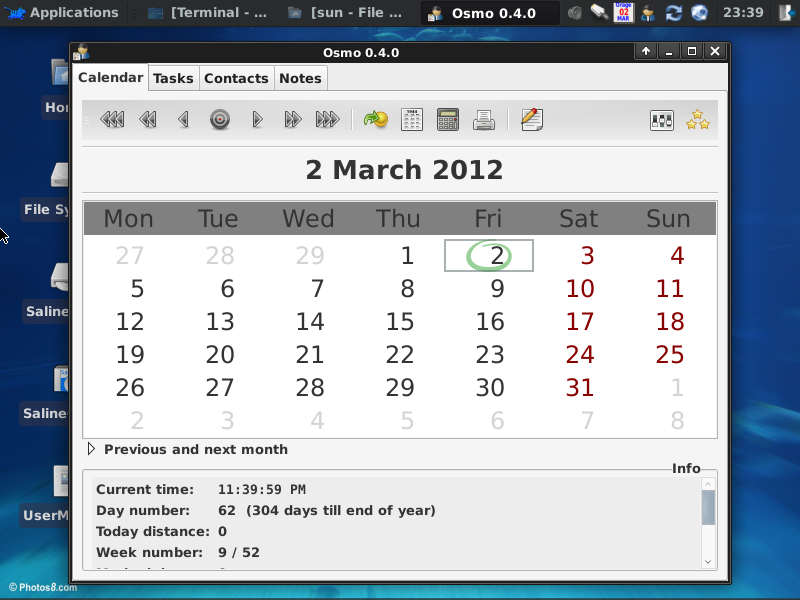 SalineOS is a desktop Linux distribution based on Debian and uses the Xfce desktop environment. The first version reviewed on this website was SalineOS 1.1, and that was back in February 2011 (see SalineOS 1.1 review) . There has been several versions published since then – SalineOS 1.2, 1.3, 1.4 and 1.5.

This article is a review of the latest version, SalineOS 1.6, which was released on February 1 2011. There are installation ISO images for both 32- and 64-bit architectures, both weighing in at about 1 GB. The images are Live (DVD) images. The boot menu is shown below. 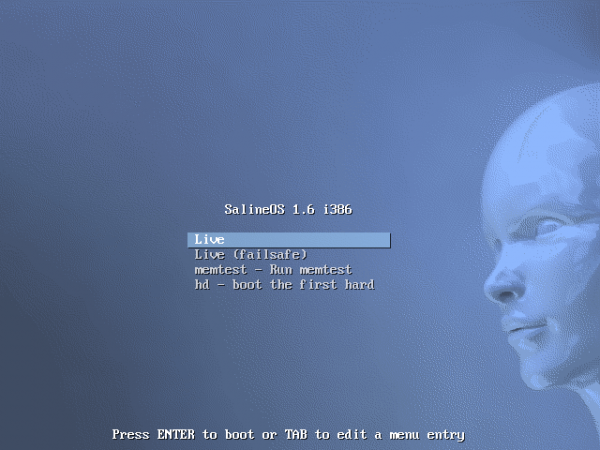 The installer has gained a few more steps since the SalineOS 1.1 review. It is still very basic in features, lacking support for LVM, the Linux Logical Volume Manager, RAID, and disk encryption, but super fast. It has an automated and a manual mode. To use the manual mode, you need a fundamental understanding of disk partitioning in Linux, because the disk partitioning tool you will be using is GParted. For new users, guide to disks and disk partitions in Linux is a good article to learn some of the basic concepts from. The image below shows what you will see when you start the installer. Clicking “No” will launch GParted. 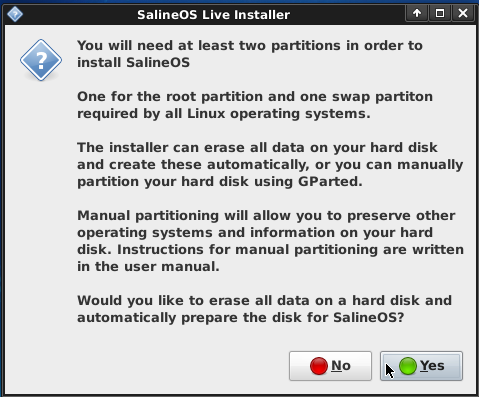 Clicking “Yes” lands you at the window shown in this screen shot, and selecting the target disk starts the automated partitioning phase of the installation process. By default, the installer creates just two partitions – one for the main system, and the other for Swap, with just about 2.8 GB of disk space used by a new installation. 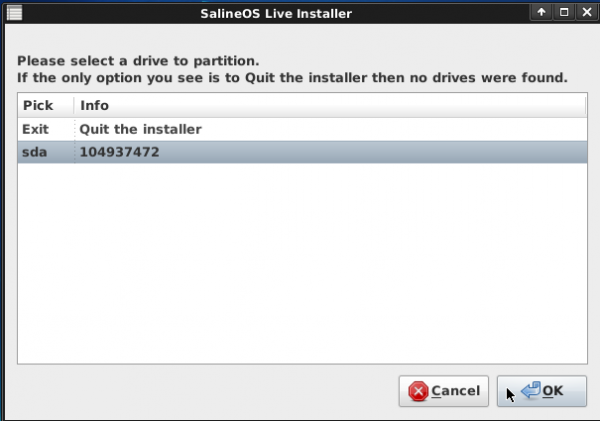 GRUB 2 is the boot loader used, and you have a choice of where to install it. There is no facility to configure a password for GRUB. 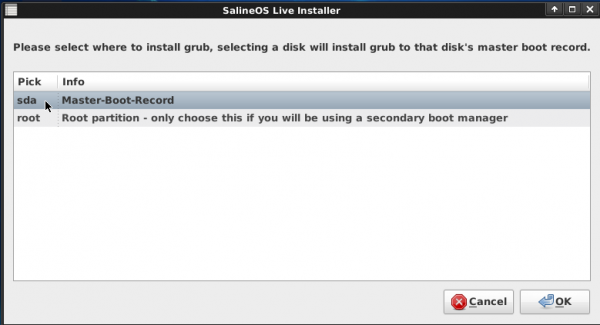 Towards the end of the installation process, you are presented with this window. It is always a good idea to click “Yes” here, unless you are a Free Software purist. 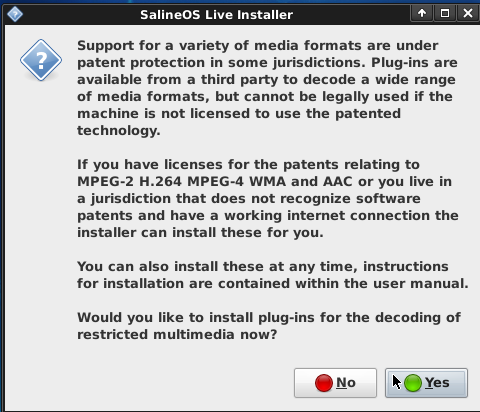 For some reason, the login screens graphics looks familiar, but I cannot quite remember where I saw it before. In any case, it looks cool. 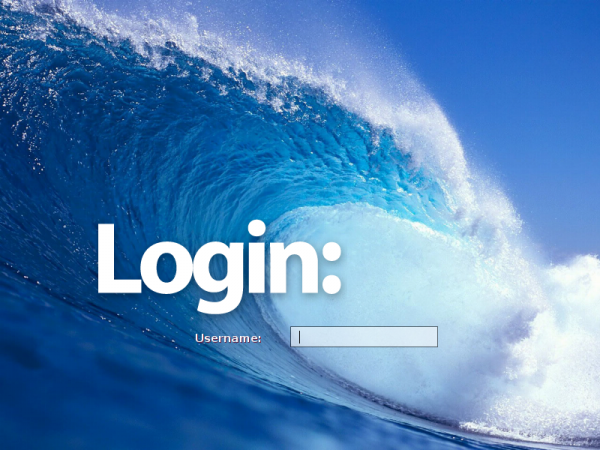 The desktop itself is powered by Xfce 4.6 (the latest edition is Xfce 4.8). But that is what happens when a distribution is based on Debian. Despite that, the range of installed applications is drawn from repositories that do not follow the strict guidelines defined by the Debian project. A screen shot of the default desktop is shown below. It has a top and a bottom panel, but the bottom panel is hidden by default. 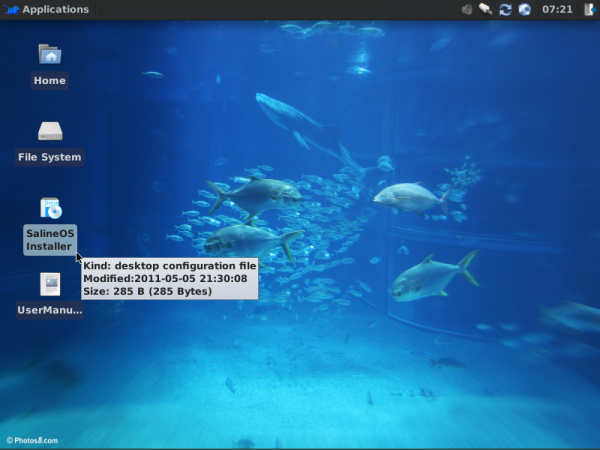 It rears its head when you mouse over the bottom area (of the desktop). On it are several application icons – for an easy, one-click launch of the most commonly used applications. 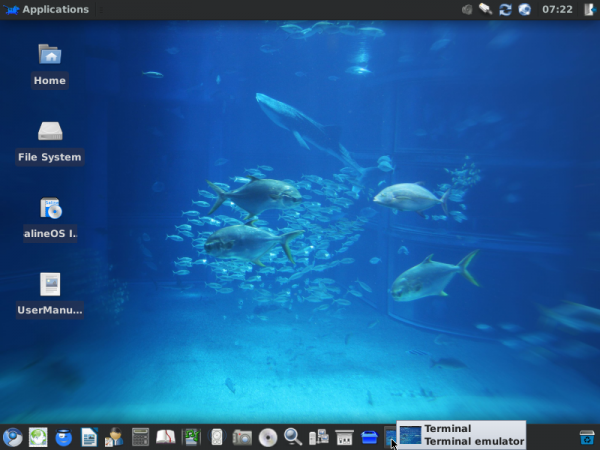 At initial login to all the test systems that I installed, I found that the installer’s icon on the desktop was never deleted. Any attempt to delete it (move it to Trash) generated the error message shown in this composite screen shot. Even with the error, the icon disappears on reboot, that is, on reboot after the failed attempt to delete it. 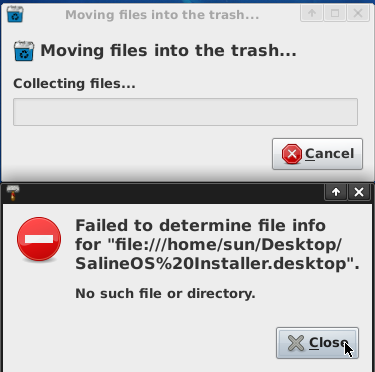 FF 10.02 and Midori both are much better than chromium or iceweasel and work perfectly in SalineOS. The desktop error is rather minor as all that is required is a screen refresh. TBH the distro is practically perfect.

If you ‘touch ~/Desktop/file.txt” an icon should appear on the desktop, and vice-versa if you rm it. Works under Mint/SFCE, not Saline. I conclude Saline’s XFCE is still broken.

I seem to remember that curling wave as a login screen in Ken Dulcimer’s TinyMe 111.

Saline certainly seems like a well thought out package. The choice of applications to start with (Chromium/Icedove/Xchat) is particularly appealing. So is the design with access to the most important launchers in the bottom panel, hidden.

You’ve seen the login picture probably in SLiM, it is one of the backgrounds included in the package. Nice review, thanks.

“The choice of applications to start with (Chromium/Icedove/Xchat) is particularly appealing.”

But what’s not appealing is that the packages are very “old.” Chromium 6, Iceweasel 3.5. That’s dinosauric!

This is a Debian Squeeze based distro, if you want an up to date browser you can always go to the Google Chrome website and download the deb file for Chrome. It installs the repo upon installation.