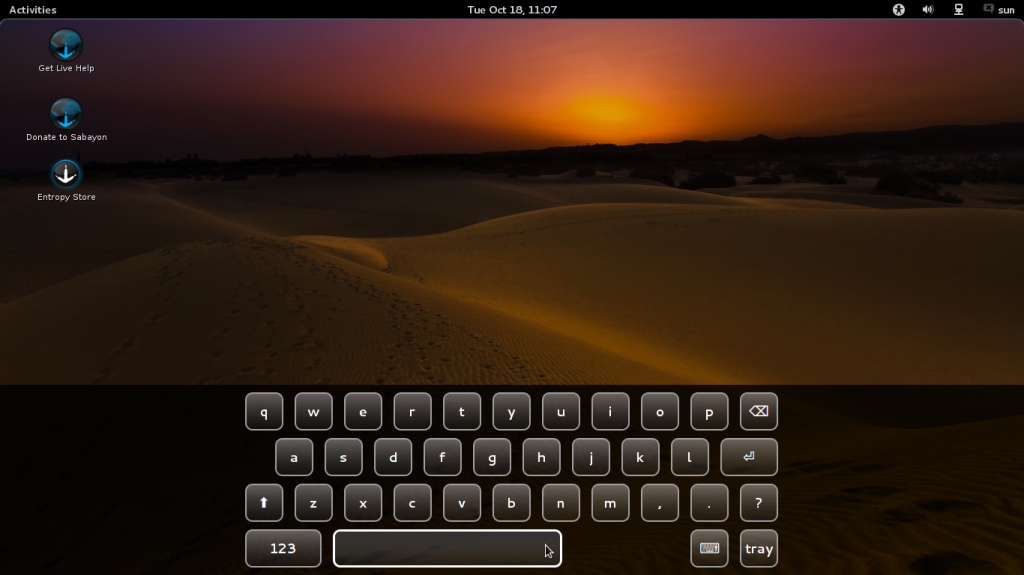 I was not expecting the docks application icons to shrink or be reduced in size, but that is what happens as applications are added. As you can see from this screenshot, it can get to a point where the icons are barely identifiable and the tooltips barely readable. 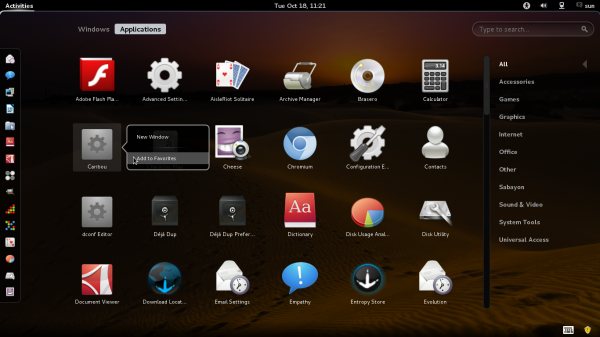 Sabayon is known for shipping with virtually every application most users will need to accomplish their daily computing tasks, and Sabayon 7 GNOME did not disappoint. Chromium 14 is the only installed Web browser, and because Adobe Flash 11 and Java JRE 1.6 are installed, it will render Flash and Java content. Exaile is the installed music player, while Totem handles movies, but may also be used to play other media types. With libdvdcss installed, I had no problem playing my commercial (encrypted) video DVDs.

One area that I had a little problem using the system, was with device notification. Ordinarily, when a USB drive, an audio CD, a video DVD, or a printer, is connected to the system, the device notifier is expected to start and give a visual cue. With Sabayon 7 GNOME 3, however, the device notifier does nothing. With audio CDs, for example, I had to launch Exaile, but it always generated the error message shown in the image below whenever I tried to play a track from a CD. There was no such error associated with playing a video DVD with Totem.

Setting up a printer on most popular distributions has always been a plug-and-print operation. However, on Sabayon 7 GNOME, at least on my test installation on real hardware, it did not work out that way – even with cupsd, the daemon responsible for printing, active and running. I had to configure the printer from the CUPS Web interface before I could print. 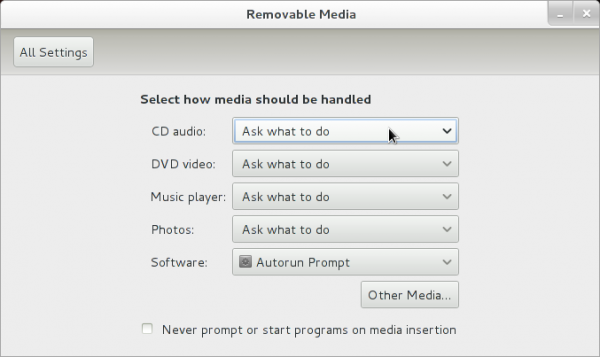 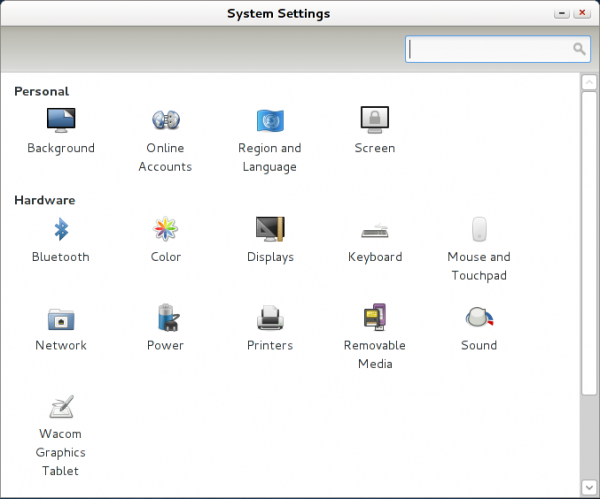 A graphical application that I really like, is the Services Settings tool. It simplifies the management of all those services and daemons in the etc/init.d directory. It is accessible from the Other menu category, and may also be started from the command line by typing services-admin. 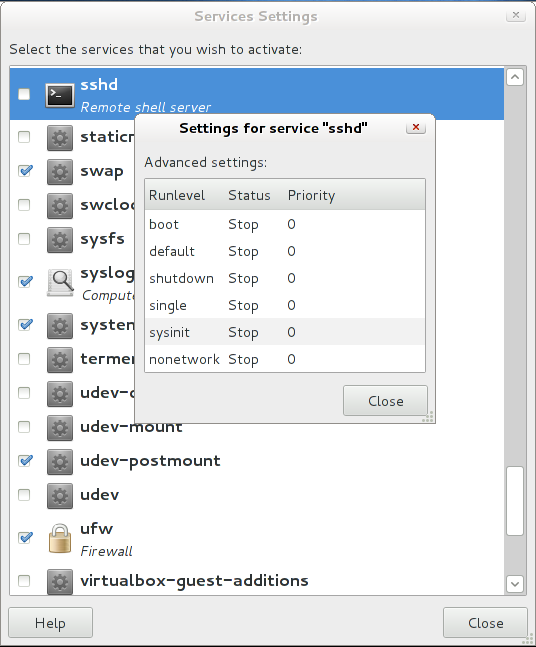 How Secure Is The System?: Out of the box, there are just two open ports on the system. These are the rpcbind (111) and Internet Printing Protocol (631) ports. But considering that the firewall is activated and preset to deny access to all incoming services that have no entry in the state table, Sabayon 7 GNOME, at least from a network security perspective, looks good. But a firewall is not the one-stop solution to securing a networked computer. Fedora for example, in addition to having a firewall activated and configured, also ships with SELinux enabled. SELinux is one of three applications for Linux systems that provides mandatory access control services. The others are AppArmor and Tomoyo. None is activated on Sabayon 7 GNOME.

The graphical firewall application installed is ufw-Frontends, one of three graphical interfaces for ufw, the Uncomplicated Firewall. The main interface, with the rule addition window inset, is shown below. It has a few more features than Gufw, the one installed in Ubuntu. 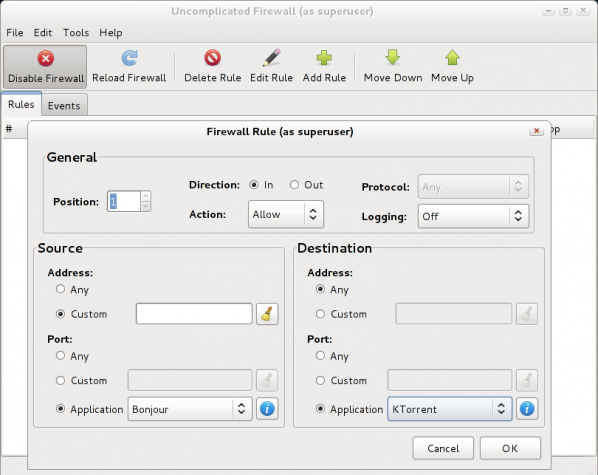 Aside from network security tools, Sabayon’s support for disk encryption and boot loader password-protection during installation means that the system can be configured to be as physically secure as you want it to be. A good security posture has to take potential threats from physical and over-the-wire (network) sources into consideration. With Sabayon 7, I think with a little effort, you can present a pretty good security profile.

Final Thoughts: I am not a fan of GNOME 3. And that is because the interface gets in the way. But the interesting thing is, once you get past the first two mouse clicks it takes to actually start being productive using it, it reveals some really cool features. I think by the time GNOME 3.4 is released something next year, the developers would have found a way to address major issues that are stopping many users from switching. Until then, my desktop environment of choice still remains GNOME 2 and KDE. That means the next review of a Sabayon edition on this website, will be Sabayon 7 KDE.

Resources: Installation ISO images for 32- and 64-bit platforms may be downloaded from here. And you may read the Release Notes. Support questions questions may be posted on the projects forum and also on Questions and Answers. 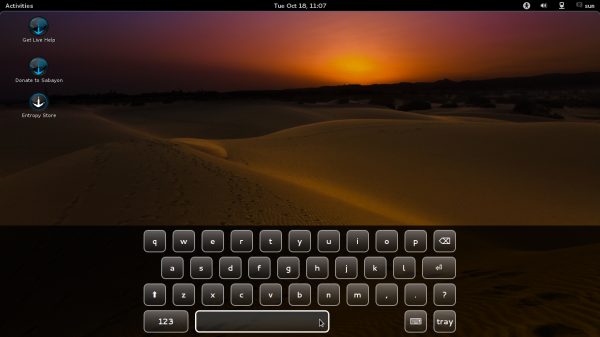 The desktop in GNOME 3 Fallback Mode. 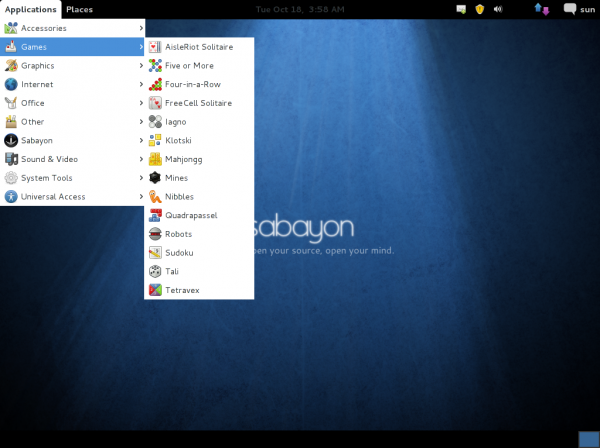 Another screenshot of the desktop in GNOME 3 Fallback Mode. 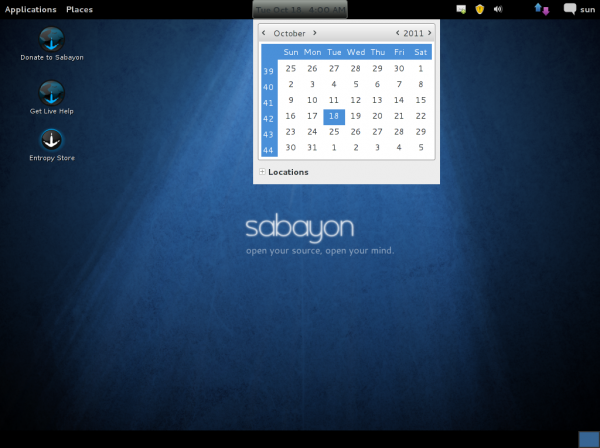 Can someone tell me how big the Sabayon repos are?
Thanks

If by “big,” you mean number of available packages, the repo(s) are huge.

Thank you very much.

It’s absolutely beautiful, but fighting with a printer that works under any other distro made it a deal-breaker for me. I tried many suggestions from users having the same problem, and the network printer plainly won’t work.

If it doesn’t work out of the box, I can’t hand it to a new Linux user – this distro version FAILS at this point.