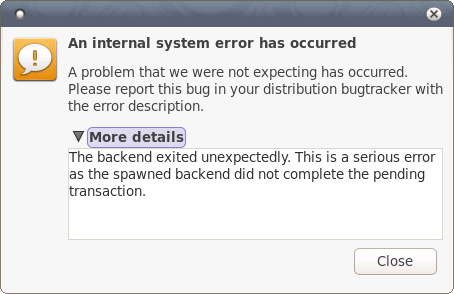 Fusion Linux is a (desktop) Linux distribution derived from Fedora, with some inspiration from Linux Mint and Crunchbang, a Linux distribution based on Debian. It is developed by Valent Turkovic, a Fiber optics and Networking Engineer from Croatia. This release, Fusion Linux 14, aka Thorium, is the project’s second stable release. Fusion Linux releases are supposed to track Fedora releases in the same manner that Linux Mint tracks Ubuntu Desktop releases.

As you read on, you will notice, if you are familiar with Fedora, that the difference between Fusion and its parent distribution lies mainly in the installed and installable software selection. It is, in the words of the developer:

… an installable Live image that includes multimedia functionality out of the box, with added desktop tweaks for better usability and additional software. It also gives the user the option of installing the operating system to the hard disk for a much better user experience.

Fusion Linux is 100% compatible with Fedora. A Fedora Remix including packages from Fedora and RPM Fusion software repositories plus some custom packages. The basic guide principles behind this Fedora Remix are; “Beyond Upstream” and “Multimedia Out of the Box”. You can also think of it as a “Pimp My Ride” version of Fedora! 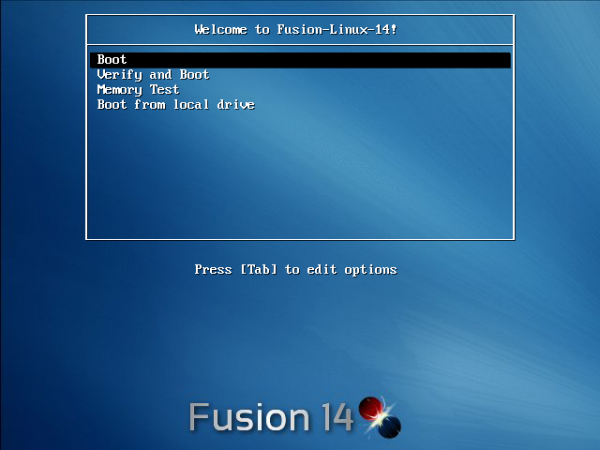 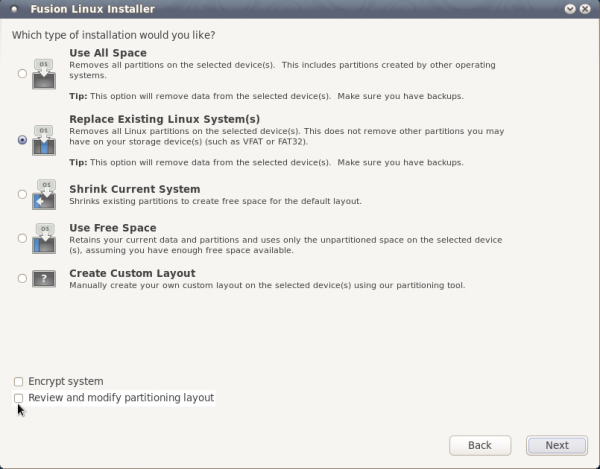 RAID, LVM, the Linux Logical Volume Manager, and disk encryption are supported. LVM is the default disk partitioning scheme. Depending on the size of the hard drive, the installer will create two or three logical volumes, besides the non-LVM partition for /boot. On a disk of about 100 GB or more, the installer will create logical volumes for /, /home and swap, as in the example shown in the image below. However, if the disk is less than about 60 to 70 GB, only two logical volumes – for / and swap, are created. 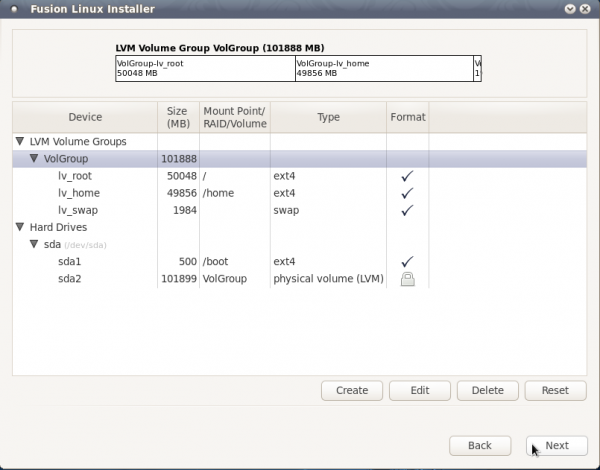 Desktop: Fusion is a GNOME-based desktop distribution, and Fusion 14 ships with GNOME 2.32. The default wallpaper is the same you will find on Fedora 14. A major difference between GNOME on Fusion and on Fedora 14 is that mintMenu is used on Fusion instead of the classic GNOME menu. mintMenu is the menu style used on Linux Mint. It is conceptually similar to the Lancelot menu, and considered by many to be the best menu style available on Free Software desktops.

The main difference between mintMenu on Fusion and the original application on Linux Mint is that the Fusion port is not integrated with the package installation program, so the option to install a package is not available if you initiate a search for it on the menu’s search box. 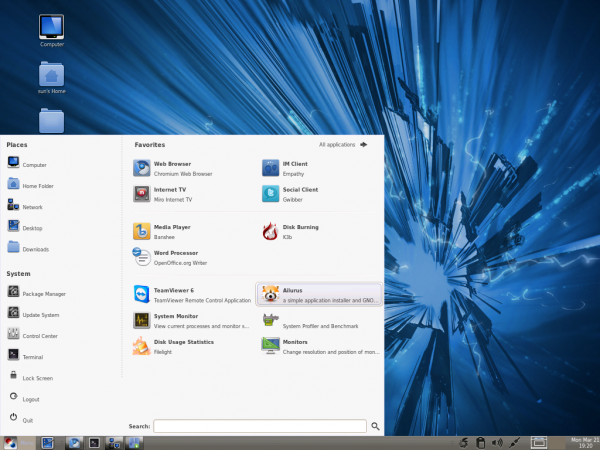 Another difference between Fusion and Fedora is the (Fusion) post-installation script, an inspiration from Crunchbang. Like Kaptan on Pardus, it is run on first boot, and offers an 8-step, post-installation customization process. Step 2 gives you the option to update the system, while step 7 offers a choice of three desktop wallpapers – Fusion Linux Wallpaper, Fedora Wallpaper and a Special Surprise wallpaper. Screenshots of all three are available on the last page of this review. The script can be executed at any time by running the fusion-welcome command in a shell terminal. 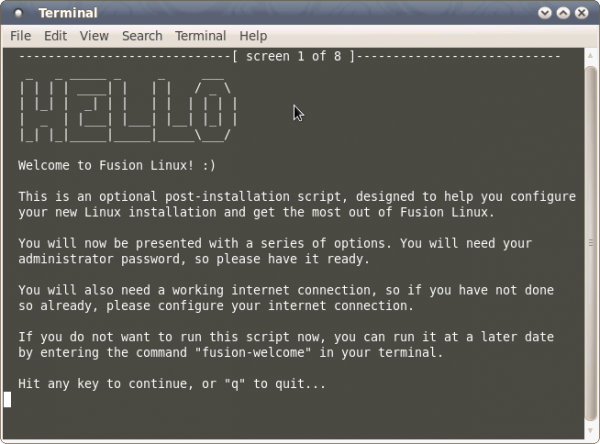 Package Management: GNOME PackageKit (gpk-application) is the graphical package manager on Fusion. It is not as sleek as Pardus’ Package Manager, or as “modern-looking” as Ubuntu’s Software Center, or Linux Mint’s Software Manager, but it gets the job done. 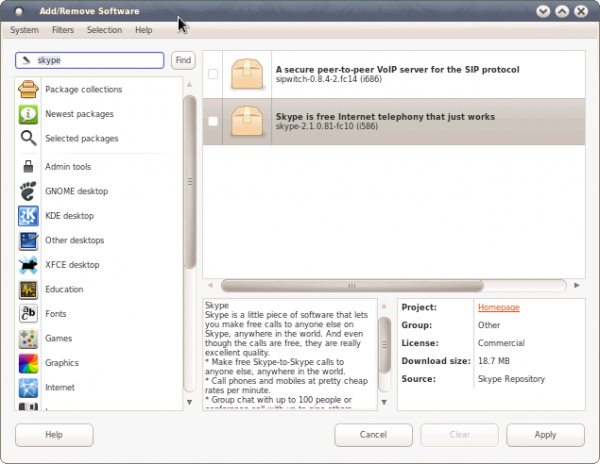 Hey have managed though I have not installed it yet but wanna go through it first and then i download hanthana, compare btwn the 2 b4 I take my pick. I guess I may have used nero to burn cos with CDBurnerXP…it was one time man. Thanx. Oh by the way are these OS’s prone to virus attacks i hear mac OS isn’t.

Using Linux exclusively for than 10 years. Not a single virus attack yet, and never installed an anti-virus software.

I have been wanting to change the operating system of my PC for a while now.I came across Fusion-linux 14 on a a site, downloaded it but am having trouble installing it or running it. In shot it hasn’t got the exe file, all i see are 3 folders: 1, live OS; 2, EFI; 3,Insolinux & what seem as a blank paper GPL.
Please help i install this OS.

The image you downloaded has to be burned to a CD/DVD before you can use it. So, burn it to a CD/DVD, boot the computer from it, then start the installation. There are free programs that you can use to burn ISO images to disk for Windows.

Fusion Linux is a fine re-mix of one of my all time favorite distros.
So good in fact it’s spawned a few re-mixes. Nowhere near as much as the big ‘U’ I personally like and am using Hanthana Linux. I’ve used Fusion too. But I must say, no offence to Fusion and the guys behind it, I just find Hanthana more complete..

@finid thats exactly what I did, burned the image to cd using CDburnerXP but it can not boot. I think i must have used two cd’s & a dvd but still nothing. is there something am not doing in trying to burn the image?