Since Windows 10 was released, I’ve made several attempts to set up dual-boot systems between it and a few Linux distributions (Fedora 22, Ubuntu 15.04, Kubuntu 15.04, and Linux Mint 17.2) on a brand new Lenovo G50 laptop.

On an OEM computer that shipped with Windows 8.1 and upgraded to Windows 10, that means setting up a dual-boot system between Windows 10 and Linux distributions on a computer with UEFI firmware.

Figure 1 was taken from a dual-boot attempt between Windows 10 and Fedora 22. The installer failed to write the boot loader configuration to the target device, which was the boot EFI partition. But why would I opt to continue with the installation when the system will not be bootable? So, of course, I selected No to abort installation.

And proceeded to file a bug report. 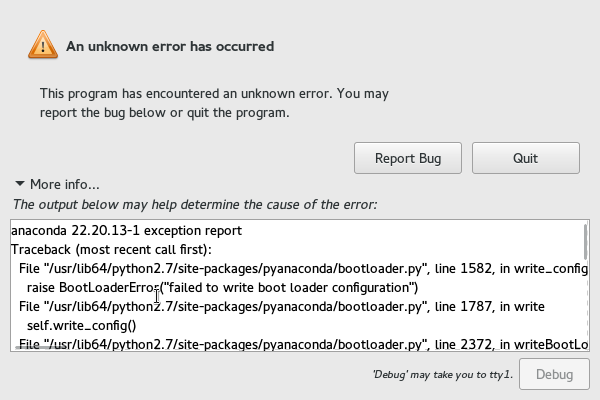 Figure 2: Crash report of failed GRUB-Install while trying to dual-boot Fedora 22 and Windows 10.

Figure 3 was taken during a dual-boot attempt with Kubuntu 15.04. In this case, I had selected /dev/sda as the device for boot loader installation, so I thought that was the cause of the error.

Figure 3: GRUB-Install error on Kubuntu 15.04 while attempting to dual-boot with Windows 10

However, another installation attempt where I chose the boot EFI partition, which was /dev/sda2, just like in the Fedora 22 attempt, also failed. So failure to install GRUB appears to have nothing to do with what the target device is.

Figure 4: GRUB-Install error on Kubuntu 15.04 while attempting to dual-boot with Windows 10

The solution that I’ve found is a non-technical one; just keep trying until you succeed. Because, like I noted earlier, I did succeed in dual-booting Windows 10 and Fedora 22 and Kubuntu 15.04 on the same laptop. Since the computer involved is an OEM unit with a couple of OEM partitions, I’m inclined to believe that’s likely a contributing factor. I’ll be attempting the same dual-boot setups on a self-installed Windows 7 desktop that I’m upgrading to Windows 10 and post the results here tomorrow.

Hi,
I have the same problem with installing Linux mint 18
and there is a grub installation error
is there any one like me who had the same problem
would be relived if some body give me a hint

It should have been simple- a friend just want a cheap Linux Mint computer- a laptop.
Lenovo G50 from Amazon arrives two days later. Window 8- free upgrade to W10. So we plan a dual boot.

48 hours later I am left with a 470G W10 brick that has defeated all attempts to be configured.

http://linuxbsdos.com/2015/02/27/dual-boot-linux-mint-17-1-windows-7-on-a-pc-with-uefi-firmware/ helped enormously and I had working Mint 17.1 with 403G \home partition running off the ethernet cable. I manipulated BIOS using the hidden pencil point operated button on the left so I had a clunking dual boot.

Then I unplugged the cable: No wifi

I booted into Windows (by now W10) and wifi works. Booted back into Linux? No. No linux, no grub. By fiddling I can boot into a live Mint 17.2 USB install iso. I poked around but was just poking- the partition table seems to have been changed.

I have Successfully installed Ubuntu 14.04 along with the windows 10 , the Only problem i am facing right not is that when i start the computer it directly takes me to the Windows 10 without taking me to the grub window option , whether to choose Ubuntu or Windows 10
please help me ..?

I think that’s because Windows 10 is set as the default in the UEFI Setup Utility.

You should be aware that even after making that change, it will not necessarily remain so, because of the how some PC vendors implemented UEFI. In some cases, the default boot manager is the one that was last booted, regardless of the setting in the UEFI Setup Utility.

So play with yours and see how it works.

Get a win10 preview .iso (I use build 10162), (in windows) use rufus to create a bootable usb. Open the usb, delete the UEFI folder. Shut down system.
Insert the live linux usb, boot from this usb, format C drive as NTFS. Shut down.
Remove linux usb, insert win10 usb, install (in legacy mode), get into disk management and create > 10Gb free space by downsizing windows. Go to control panel, then power mangement/options, turn off all features enabling windows to sleep or hibernate – NEVER!. Shut down.
Insert linux usb, power up, install linux alongside win10. This should result in a dual boot system, linux can automatically see win10, you can fine tune the boot order with grub-customizer. None of this mucking around ‘failed to install’ etc. Cheers, AA