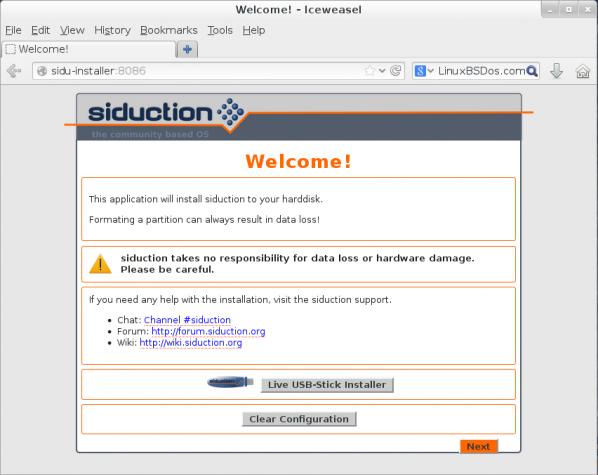 That was all about sidu-installer, what about the desktops? Before I get to that, a paragraph or two about systemd, the new init system that the distribution has adopted. On Fedora, the distribution I’m using right now, my interaction with systemd has been from the command-line. I have no problem with that, but a good graphical interface for managing services on a system is always welcome.

And that’s one of the good points about Siduction 2013.2. It comes with a graphical interface for managing systemd services. It doesn’t have a fancy interface, but it works, and that’s the most important feature. The best part, or one of the best part, about systemd is Systemd Journal. Tail-ing system logs has never been more fun. But more on that at a later date. For the record, this screen shot shows that the SSH server is running. And that’s by default. An option during installation allows you to disable it, otherwise, it is enabled by default. 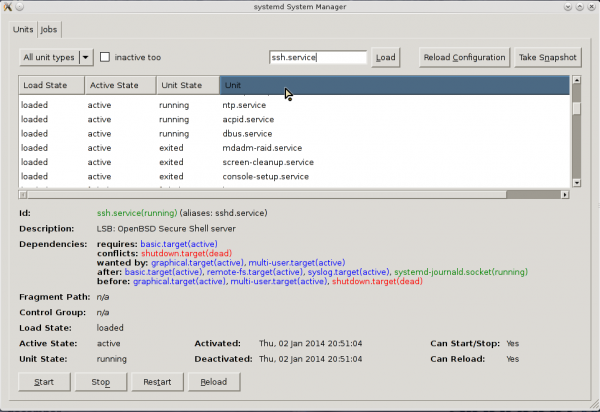 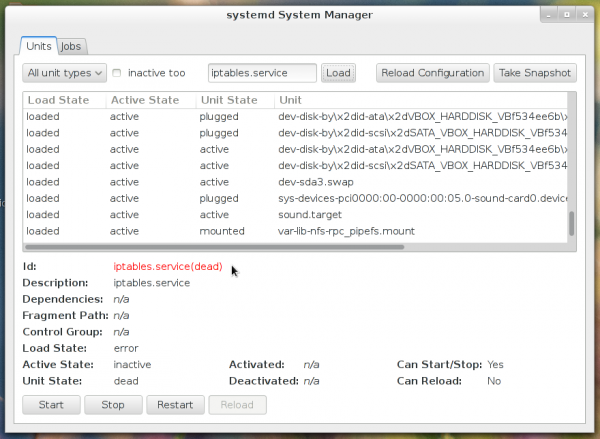 We like to say that Linux is more secure than the Windows operating system, and while that is largely true, for some Linux distributions, that statement has to be qualified. A few hours before I started putting the finishing touches to this review, I had the opportunity to play with a brand new Lenovo IdeaCenter K450 desktop that a friend just bought. I unboxed the box myself. This screen shot shows the default security setting of the unit, which came with Windows 8 with Restricted Boot (Secure Boot) enabled. But some Linux distributions refuse or fail to do the same for their distribution. While on this subject, you might want to read Why your computer needs a firewall enabled. 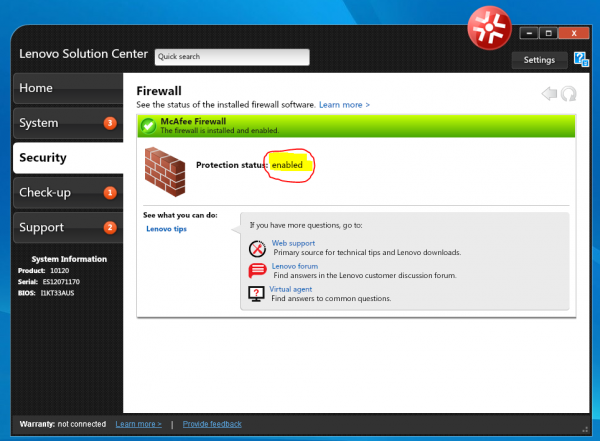 Now to the desktops.

The KDE edition shipped with KDE 4.11.4, and a default installation of the KDE desktop comes with a generous selection of applications that take up just about 3.8 GB of disk space. This screen shot shows the default desktop. That wallpaper does not appeal to me, but that’s personal and not very important. 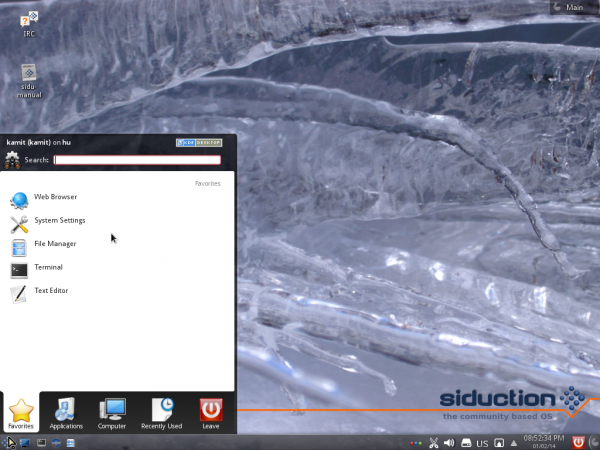 Even though it comes with a wide variety of production and system applications, a graphical package manager is not part of the installed software selection. It doesn’t make sense and I don’t know why, but that’s the way it is on Siduction 2013.2. What that means is all software management actions have to be executed from the command line.

Aside from the absence of a graphical package manager in the default installation, this distribution’s KDE edition is the first I’ve reviewed in which access to the Plasma Netbook interface is disabled. Knowing that not very many users care about that interface anymore, this is nothing to worry about, and I didn’t even bother to find out how to enable it. The Plasma Netbook interface was cool at a time when it seemed that Netbooks were going to be the next big thing, but that didn’t happen. 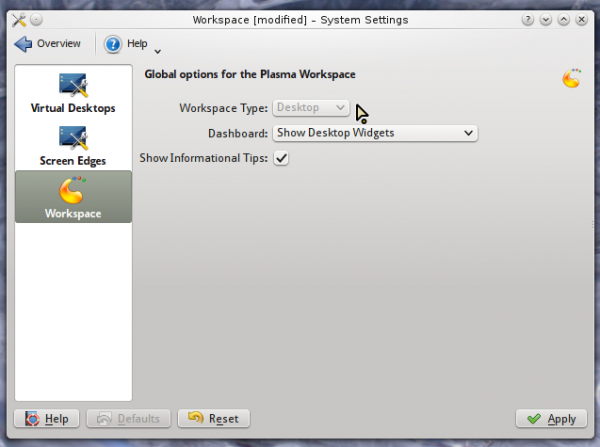 Whenever I review a KDE desktop, I try to see if I can install a menu style other than the KickOff and Classic style, and so I tried to do just that on the KDE edition of Siduction 2013.2. But no luck. Homerun and Lancelot are not installed and are not in the repository. If you are new to our space and have not used Homerun and Lancelot, see Homerun: Quite possibly the best app launcher for your desktop and Lancelot menu.

Click on any image below to view a gallery from the test installation of Siduction 2013.2 KDE.

The KDE desktop of Siduction 2013 showing the Kickoff menu.

Partial list of installed utilities on Siduction 2013.2 KDE desktop as seem from the Kickoff menu.

Installed applications in the Settings category of the Kickoff menu on Siduction 2013.2 KDE desktop.

Installed applications in the Office category of the Kickoff menu on Siduction 2013.2 KDE desktop. Unlike the GNOME 3 edition where LibreOffice is installed by default, no Office suite is installed in the KDE desktop.

This gallery feature images that give an idea what to expect on the GNOME 3 edition of Siduction 2013.2.

The GNOME 3 desktop on Siduction 2013.2. By the way, that is not the default wallpaper.

The GNOME 3 desktop on Siduction 2013.2 showing the desktop calendar.

The Activities view on the GNOME 3 desktop of Siduction 2013.2

The GNOME 3 desktop on Siduction 2013.2 showing the appview.

The desktop on Siduction 2013.2 GNOME showing the app menu.

To sum, I think this has given you an idea of what Siduction 2013.2 has to offer. As desktop distributions go, it doesn’t meet my expectations, especially with regards to the installer and the default network and physical security posture.

Resources: You may read the Release Notes here and download an installation image of your choice from here.

Let me add some points to this otherwise well-written review
1.) In debian sid it is always a very good idea to install/update packages through very basic tools like apt (recommended here), as the console outputs often give hints to possible breakages, and in some graphical package managers these are sometimes suppressed. Synaptics or Debian Package Search is just one apt-get away 🙂

3.) As for the installer, what I’ve read in their forum and on irc they are not satisfied with it at the moment and know that it needs rework, not only regarding usability.

4.) This seems to be the first time a debian distribution tries to switch to systemd-init completely and for a full set of desktop environments, and systemd is not completely set up in debian yet. If one sees siduction in this respect as a feasibility study, it is really bleeding edge and activating/deactivating default services is still work in progress. I really like to heavily test this distro on some (not productive) machines.

As much as I appreciate past reviews, this one IS a bit different. However, it’s built on an “unstable” version of Debian, may have a somewhat flawed installer (I had no problems, however), and what’s with reiserfs? That development/support ended in 2008 (for more than obvious reasons when Hans did the unthinkable): most, if not all main projects/distros suggest ext4, so I guess even though Sid uction (see what I did there?) is all that I mentioned, it may be one of those distributions best taken under the premise that it’s, as a whole, is unstable, and to be viewed that way. I doubt anyone is running this as a production OS, so those of us who’ve tried it, either as HDD or VM installations see it for what it is. Just HO.

Many more experienced users, who this distro is targeted at, like to have the ability to SSH into their machines and it makes sense to have this set up from the start, although perhaps a better way would be to present a choice during installation like some Slackware based distributions do. But most home users of that type, and SOHO anyway, would be running this behind a router with a firewall configured on it already, or even better with a hardware firewall or their own server using Smoothwall, IPcop, etc. acting as a gateway between LAN and the ‘big wide open’. Thus the insistence on all ports closed and no running services seems a bit redundant these days.

Siduction is based on Debian unstable/Sid (thus it’s name), obviously it’s not targeted to the new Linux user. So, for the experienced Debian user, the nits that you’ve picked are largely meaningless. The installation isn’t the best, but since it’s strength is being a rolling distro, you only install once. If you know what you’re doing (like you should if you’re using it), it’s not that big of pain for a one time deal. Also, this is meant as a desktop distribution, not a server distribution. So, an experienced Debian user is not going to have the box directly facing the internet in most scenarios. If they do, they should have the know-how to lock it down themselves in the configuration they like. The strength of Siduction (and other distributions based on Sid), is the rolling updates of Sid combined with the added value of stabilizing that a bit, as well as having extra utilities to run Sid as a desktop distribution, combined with forums/support to know when breakages in Sid are likely to occure before running your updates. It seems your review is coming more from a perspective of a RPM type guy, and not someone with experience of running Debian systems as desktops… (that and the perception that Siduction is intended as a general use desktop system – it’s not, it’s intended for users experienced in the way of Debian).

It’s good to see a review of Siduction, a very interesting Debian Sid distro. There are a couple of aspects in the review I’d like to comment on, though:

1. The install process – yes, if an installer is offered, it should work. At the same time: Siduction is a rolling distro, based on Debian Unstable. It’s aimed at experienced users, who are able and willing to solve technical problems. If you can’t get through the install process, then probably Debian Sid is not for you.

2. The same thing is true for graphical package management. If you don’t know how to open a terminal and type “sudo apt-get install synaptic”, then chances are that Sid is not for you…..

3. Security: restricted boot does not give more security but does reduce user freedom. See extensive discussions and whitepapers about this issue, among others at fsf.org

On the first point, I don’t see anywhere on the project’s home page where it’s stated that the distro is for guru-level users only.

On point 3, I agree. Every sensible person agrees.

You really have no idea how to differentiate between the differences of “Windows” based network security and “Unix/Linux/BSD” based security do you? When the attackers are from the windows world they can’t effect the Linux system very easily at all since their “keys are a completely different kind of key” for your unlocked car metaphor.
Blindly saying “all things need a firewall”, is just an uninformed blanket statement, but sure, a properly configured firewall helps.
Firewalls on a Linux distro aren’t the cure for linux network security cancer like it is for the Windows world where its security is like swiss cheese and with closed source bugs they can use & exploit.
You should really try to learn the difference/reasoning for what a firewall is used for in a Linux based context instead of blindly following what is true in the Windows world and blindly bringing a truth from a Windows context for a firewall and applying it without thought in a Unix/Linux context.

If you have SSH running on an Internet-connected box and you have nothing protecting it, then it’s either you have no idea what you are doing or you don’t care. Try setting up a box, connect it to the Internet and watch your logs for the number of break-in attempts targeting SSH.

Security is a process, so no single security application is enough to protect a system, but if you fail to provide basic network security on an Internet-connected system, then you don’t…