How to straighten out firewall configuration on Fedora 18

This is the latest article on Fedora. You may access all Fedora-related articles on its category page at http://linuxbsdos.com/category/fedora.

Given that Fedora 18 was released several weeks past its due date, I expected that the extra time would have been used, aside from fixing the show-stopper issue(s), to make sure that basic features work without unnecessary errors.

But that’s not the case. 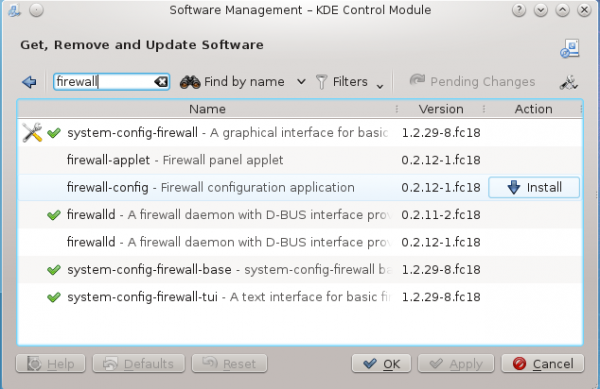 To fix this, I uninstalled what’s not needed and installed what you need to mess with FirewallD, so that the search result for “firewall” from Apper looks like this:

After installing and starting firewall-applet, here’s a screen shot of the applet on the panel. 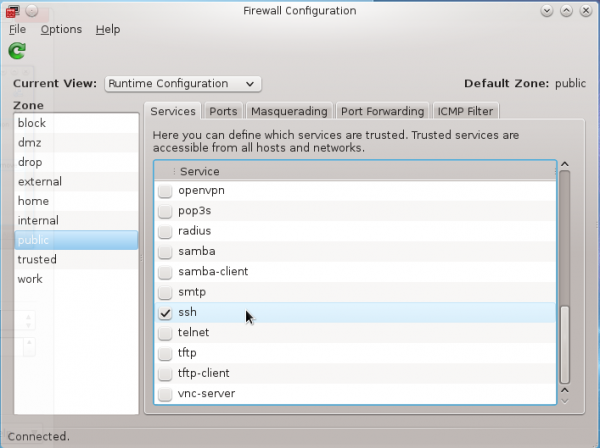 I have Fedora 17 installed and it installed the Firewalld daemon during the initial clean install, I didn’t think I was installing a beta version either, which some say came with Firewalld, but that the final version of Fedora 17 should not have had Firewalld in it as there was no gui configuration tool at the time.

However there’s still no Firewall-config available to fedora17 users, so I’m stuck until I uninstall firewalld, to revert it to the old firewall setup and use System-config-Firewall.

My other machines have clean installs of Fedora18 and they seem to be complete with Firewalld and the Firewall-config components as expected.

firewall-config is listed in the comps groups for MATE, GNOME, KDE, Xfce, LXDE and Cinnamon in F18. I just checked. Consequently it will be included in standard installs of all those desktops. You must have done either an upgrade from F17 (though you would not be automatically switched from iptables to firewalld in that case: you must have done it manually), or a very unusual install of F18, to hit this. The only package group which actually includes system-config-firewall at all is the admin-tools group, which is not selected by default.

After double-checking, the system was actually an upgrade from 17 to 18. Sometimes it’s difficult to keep accurate track of things with so many installs going on at the same time. But no, nothing was installed manually on the system.

That said, I think FedUp should be able to handle upgrading everything on a system in the future.

Btw, FedUp is a great tool. Already pitched it to the guys at ROSA Laboratory.

Let’s see. You upgraded an older system that had system-config-firewall installed. When you ran it, it told you you have to use a different tool now. This is because the underlying system changed. It tells you what tool as well. So it looks like Fedora did a great job of upgrading your system and telling you what you should do for the new functionality.

And in a clean install (as was mine) it installs the new tool by default, and it works.

I’m not entirely sure what Fedora is doing wrong here. They provided a clear explanation of the migration path. What more could you expect ?

What’s the issue? I never use these kind of tools for configs. I’d like to control what’s exactly in the config and the only way to do this is edit manually…

I don’t see this issue. firewall-config is clearly installed on my system.

I think this was an upgrade from a previous installation, but even at that, it speaks to the thoroughness or lack of FedUp or whatever upgrade script was used.

Because even if this was an upgraded system, the whole point of an upgrade is to upgrade an installation – apps and all.

Are you saying that if I upgraded a system that was running the old firewall application, that the upgrade script will not install the new script?

Another example of how the distributors are no longer seriously testing their distros before release. This situation appears to be endemic to the industry now.

Have you installed F18 to verify the accuracy of this post’s claims?

Firewall-config was installed here in F18 Gnome and made available in the App Overview. Perhaps it’s an issue with the KDE spin.

Another possibility is an upgrade issue if previously system-config-firewall was the norm. I, too, found firewall-config present with a format and clean install of the root partition.

I see it listed in KDE comps, so no, looks like it should be fine in KDE too.

I do have same problem in firewall. I thought I can select both firewall id and old firewall application but after reading that everything become clear to me.