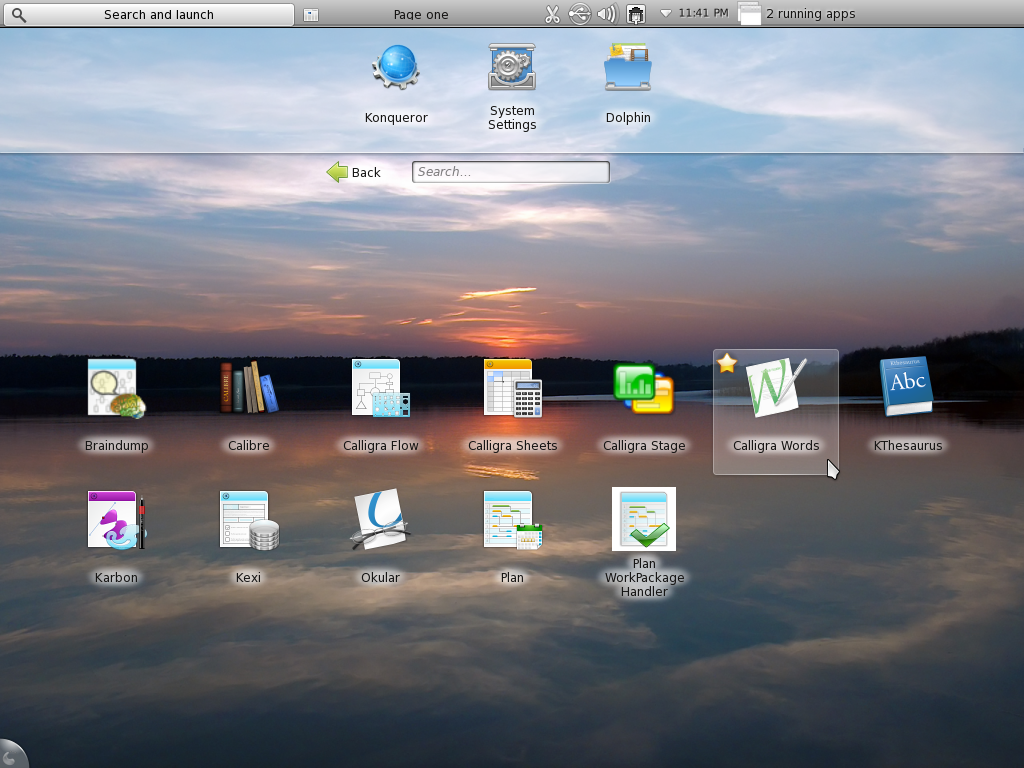 Like previous releases of Chakra, Chakra Archimedes-2012.04 comes with most of the applications you will need to accomplish your daily computing tasks. One major change is the switch to Calligra as the default office suite. Calligra is a fork of KOffice, which used to be the default native office suite for KDE. The first stable version was released about two weeks ago.

Someday, I expect the developers to get Chakra to meet their stated goal of providing “a fast, user-friendly and extremely powerful … Linux distribution.” Is it powerful? Yes, but every Linux distribution is. Is it fast? That is up for debate. It all depends on what “fast” means. The K Desktop Environment is not known to be a speed demon. User-friendly? Nyet, not out of the box. To get a new installation of Chakra Archimedes-2012.04 (even previous editions) to the point of being user-friendly requires some effort on your part. More so if you are new to a distribution derived from Arch Linux.

Setting up a printer on this distribution still requires more effort than is necessary for a desktop operating system in the 21st century. Cups, the printer package (daemon) is not running out of the box, and to make it work across reboots means messing with a configuration file. On Linux Mint KDE, Pardus and other distributions that use KDE, that process is automatic, requiring no input from the user, other than the simple task of connecting a printer to the computer. That is the level of user-friendliness Chakra’s developers should aim for. 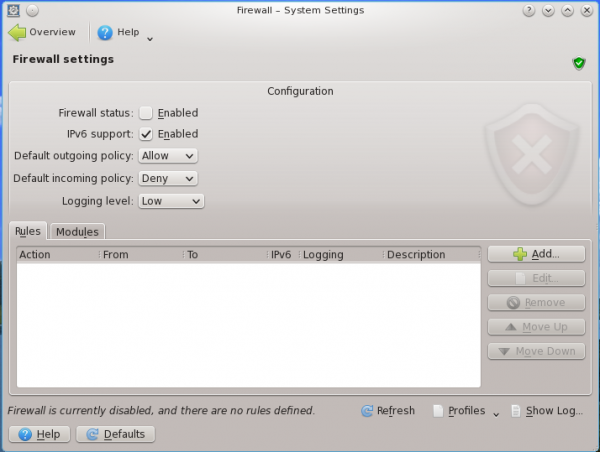 Aside from the firewall, tomoyo-tools, an application-level firewall, one of three available for Linux distributions, is in the default install. Managing it, however, requires some effort, all which has to be expended at the command line; there is no graphical management applications for tomoyo.

Before Archimedes-2012.04, the major drawbacks on Chakra were (still are) Tribe’s lack of an automated disk partitioning option, and the lack of a graphical service manager. Add to those the lack of a graphical package manager in this release, and you have a distribution that is trending backwards in user-friendliness. Which one will be fixed in the next release? My money is on the graphical package manager, but you never know. Ideally, I would love to see all the issues resolved soon. Soon, as in when the next release becomes available.

Resources: You may download 32- and 64-bit installation images for Chakra Archimedes-2012.04 here, and read the release announcement here. Support questions may be posted on the distribution’s forums.

A view from the KDE Plasma Netbook interface 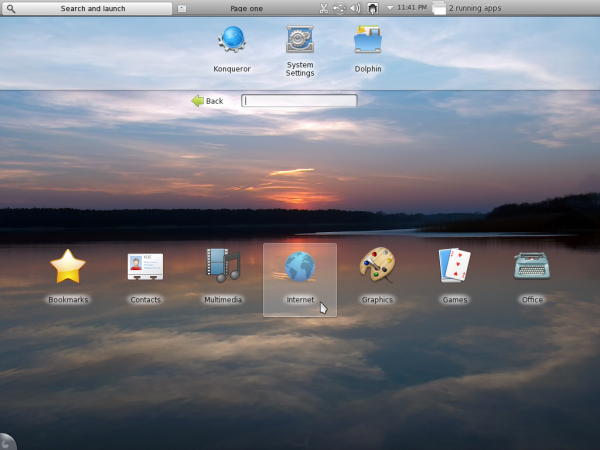 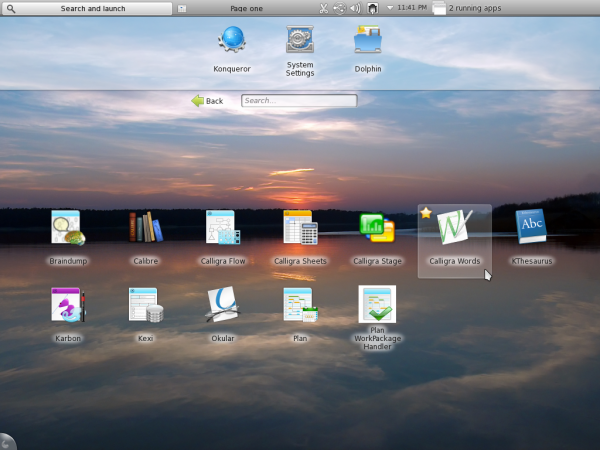 The desktop with the Kickoff menu showing application categories. 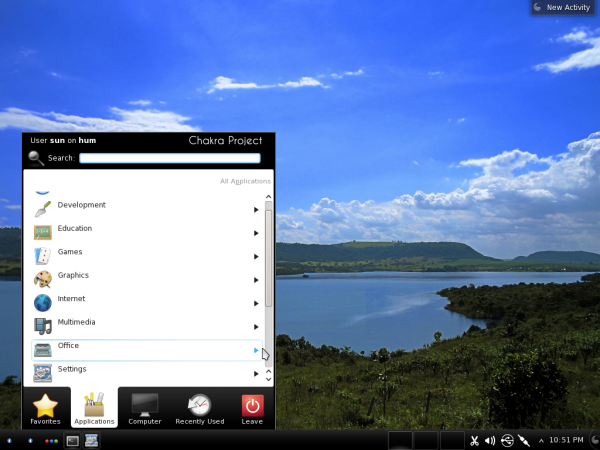 My favorites applications as seen from the Takeoff Launcher. 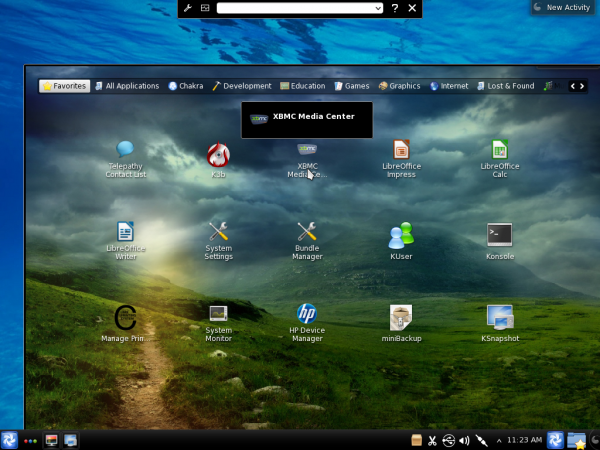 Thank you for the only honest review of Chakra I read so far. It pretends to be Century-21, but CLI is so last century.

“which earns Chakra Archimedes-2012.04 the dubious distinction of being the only desktop distribution that shipped without a graphical package manager installed.” Say what? I don’t see a graphical manager on my Arch (which Chakra was originally based but has since moved away) box’s. There is too much misinformation about the GNU/Linux world.

That should have been written “which earns Chakra Archimedes-2012.04 the dubious distinction of being the only desktop distribution reviewed on this website (or that I am aware of) that shipped without a graphical package manager installed.”

But are you really proud that your “Arch box’s (sic)” do not have a graphical package manager?

I see, thanks for the clarification. As long as we’re being candid they do make a GUI frontend for (arch) pacman it’s just not installed by default (or much of anything else). The Chakra pacman frontend was removed due to problems maybe Akabei (Chakra’s upcoming PM) will hopefully increase the distro’s appeal to you.

Chakra should not be released until the installer Tribe is stable or at least on Beta Phase, because Tribe crashes during the disk partitioning phase and that is very annoying and also a pain in the neck.

Thanks for taking the time for this very accurate review. Chakra keeps offering new ISO’s, about every 6-8 weeks, because of the rolling release nature of the distro. Any new user installing a version older then that, will run in some difficulties doing the first system update ( with any rolling release, it is recommended to update about every 1-2 weeks). This release was no exception to that, it was needed for new users to be step into the release cycle easily.
But as noted, for this release, for many it will look like a major regression, no GUI for package-management. Pacman was never designed for a GUI, and any graphical package manager Chakra has used over the years, has had major flows. That is one of the reason for developing a new package manager, which is nearing it’s first alpha release. Until that new package manager is fully functional and stable, there will be no GUI for package management in Chakra, certainly not in the next release, some 6-8 weeks from now.

I’m glad to see that people keep making different distributions of Linux, sometimes the big players really go awry, like with gnome 3. My biggest thing though is making sure I have a distribution which is compatible with the big gaming sites like dotdeb.com