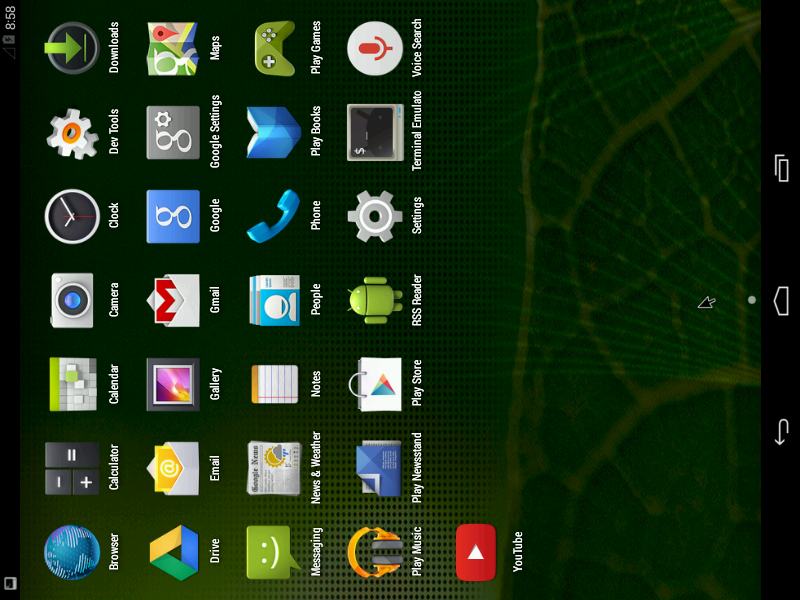 Android-x86 4.4 RC1 review is a review of the latest development release of Android-x86, a port of Android designed to run on computers powered by Intel and AMD x86 processors, including netbooks and laptops and all-in-ones.

Given that major PC vendors now have (non-tablet) Android computers on the market, I think it is a good idea to have a version of Android that we can download and install on any PC just like we do our favorite Linux distributions.

It is in that spirit that I decided to take a look at this development release of Android-x86. This development release is based on Android 4.4.2 (KitKat-MR1 release), and according to the Release Notes, the ISO installation image comes in hybrid mode, which means that it can be loaded to a USB stick, as well as burned to a CD. (The ISO image is just 294 MB in size.)

The Release Notes also said that it comes with multi-touch support, besides also supporting Wi-Fi, audio, Bluetooth, G-sensor and camera. I have an all-in-one PC that has a single-touch-capable display, but before committing to loading it to a USB stick and running and installing it on that machine, I decided, like I do with all distributions that I review, to run it in a virtual machine. This screen shot shows the boot menu. 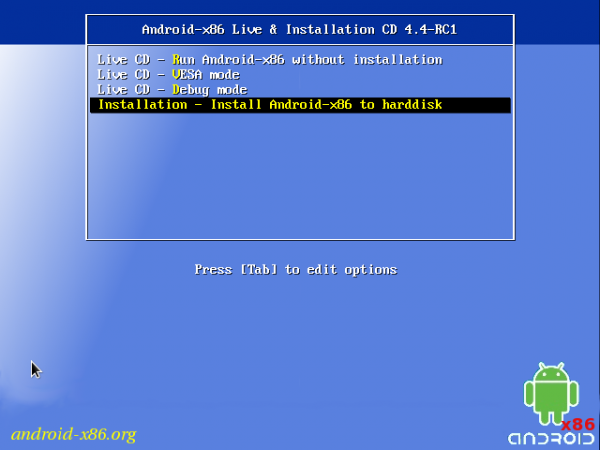 That installation to hard disk option looked like a good idea, so after booting and playing with the Live desktop for a few minutes, I rebooted the system and made a first attempt to install it to the virtual machine’s virtual disk. Note that the Release Notes does not say anything about being able to install it to a hard disk, but I’m guessing that option was put there for a reason. If it works, great, else, at least I tried.

The following screenshots show the steps involved in the attempt to install Android-x86 4.4 RC1 to a hard disk drive (HDD).

On a brand new system with no partitions on the HDD, you’ve got to first create the partition(s). 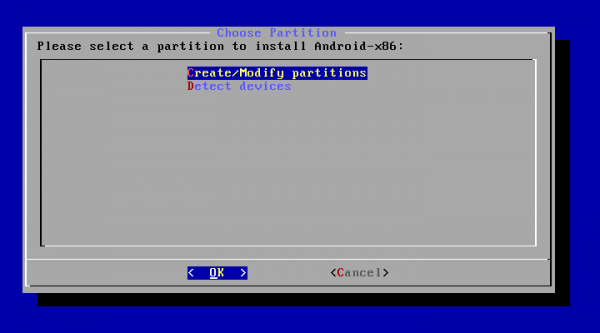 And the partition must be created with cfdisk. 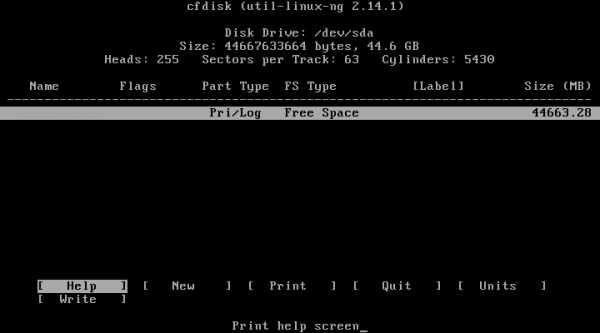 Partition’s created, time to format it. 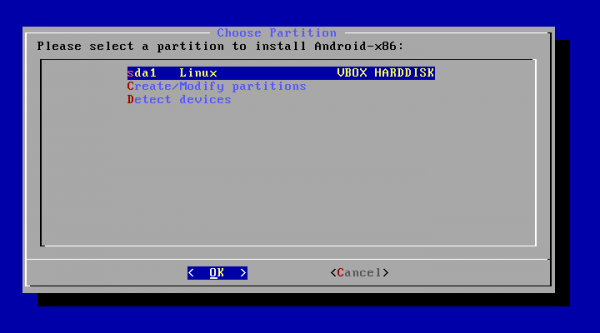 The project’s wiki page says that ext3 formatting is not supported, but I decided to give it a shot anyway. And as expected, after formatting and installing the system using ext3, the system will not boot. Ditto with ext2. 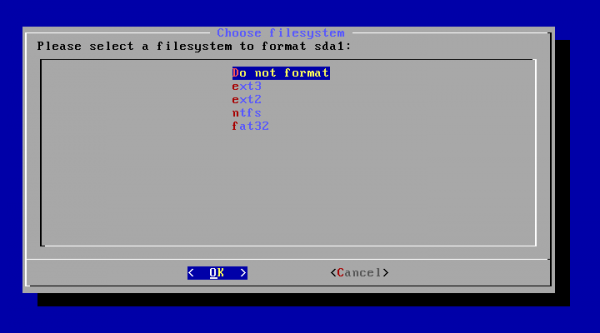 You do get this prompt regardless of the filesystem you choose to format the disk with. 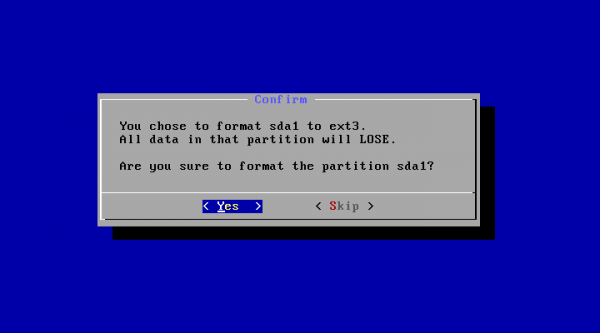 And this one, too. But I found that whether GRUB is installed or not makes no difference. After installation, the system won’t boot. 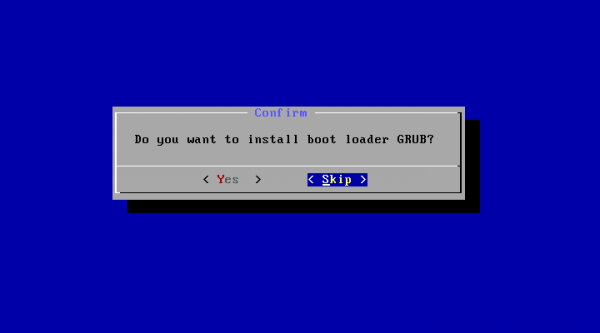 This prompt is common to all filesystems. 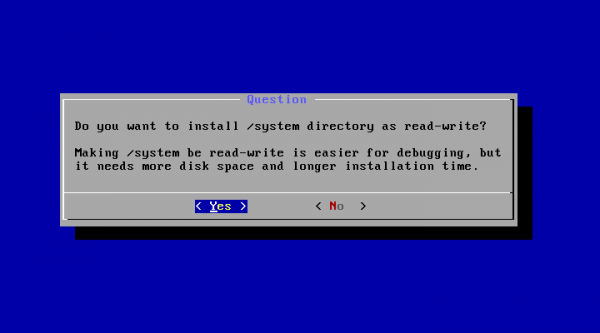 But this one is shown to you only if ntfs and fat32 are chosen as filesystems. 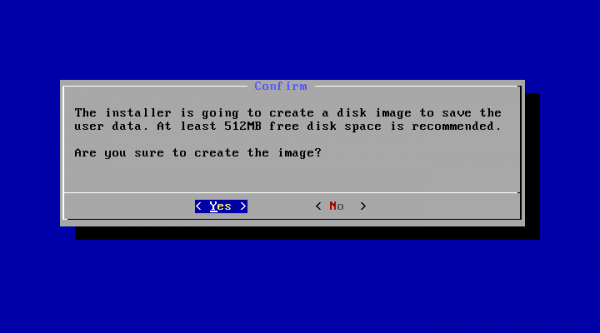 A Yes from the previous screen will cause this one to be presented to you. 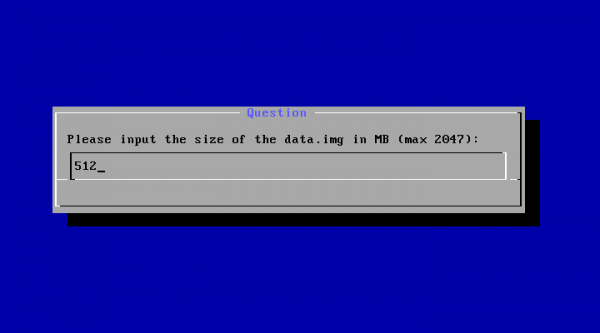 After installation has completed, this screen is shown. Rebooting is a waste of time, as the system will either display a GRUB Error 17, if that bootloader is installed, or a blinking cursor, if it is not. 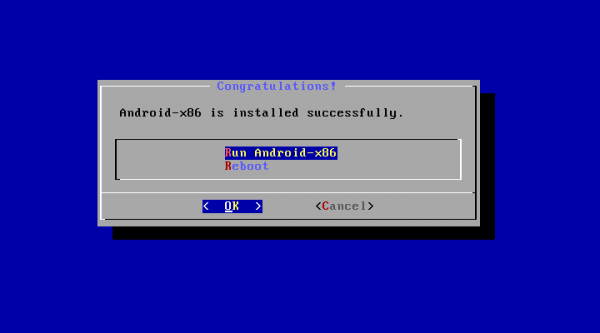 And if Run Android-x86 is chosen from the previous screen, the system will hang at the step shown in this screenshot, but only if the HDD is formatted with ext3 and ext2. 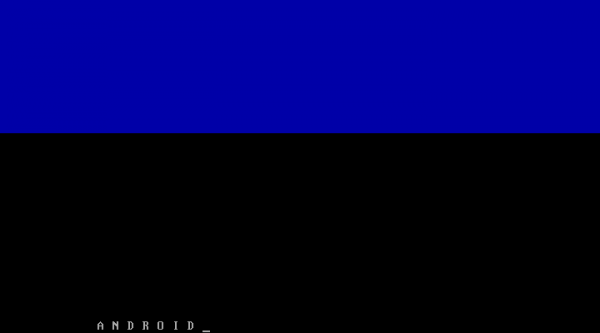 If the HDD is formatted with ntfs or fat32, the system will boot into Android. So after playing with it in a virtual environment, I loaded the installation ISO image to a USB stick using UNetbootin and installed it on my all-in-one computer that has a single-touch display.
It worked well on the machine except that audio did not work and Wi-Fi could not be configured. Configuration of the wired connection via DHCP (Dynamic Host Configuration Protocol) was automatic and it worked. This screenshot shows the first setup screen. 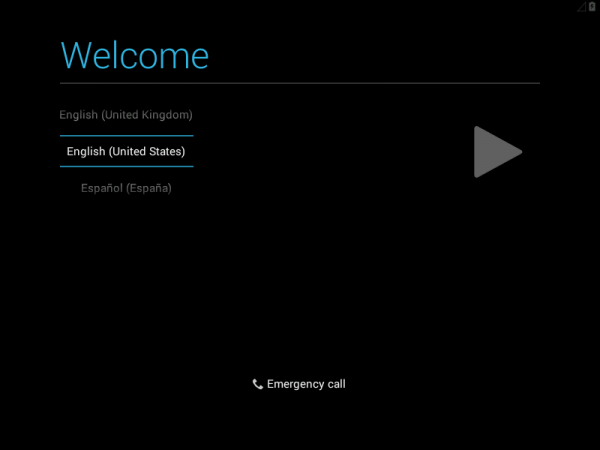 After setup has been completed, bingo! The Android home page. 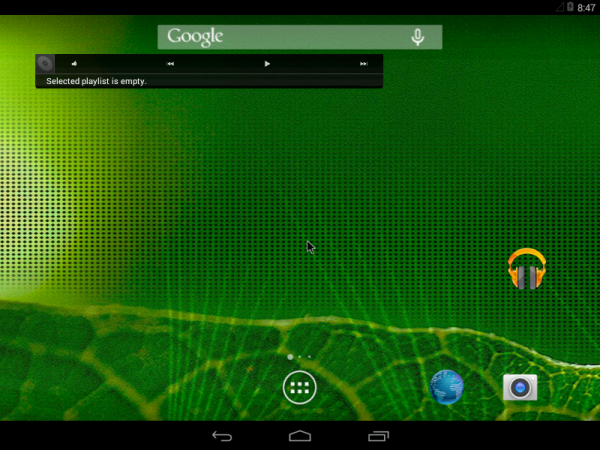 For a guy who has never used a real Android device (I’m still very happy with my HP Touchpad), seeing an app for a terminal emulator on Android is a good thing. 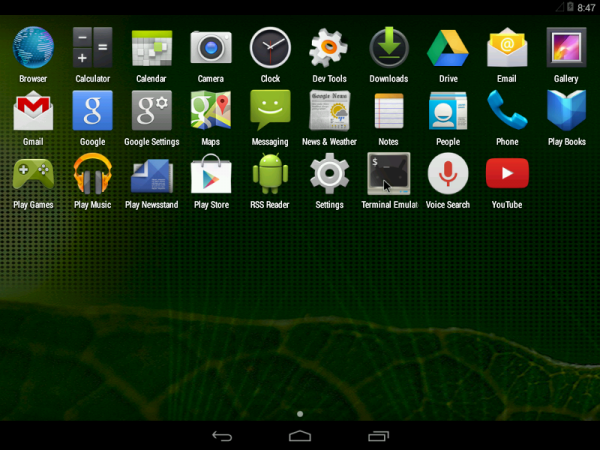 Good thing because it facilitates ssh-ing from the Android environment to any computer in my network and vice versa. 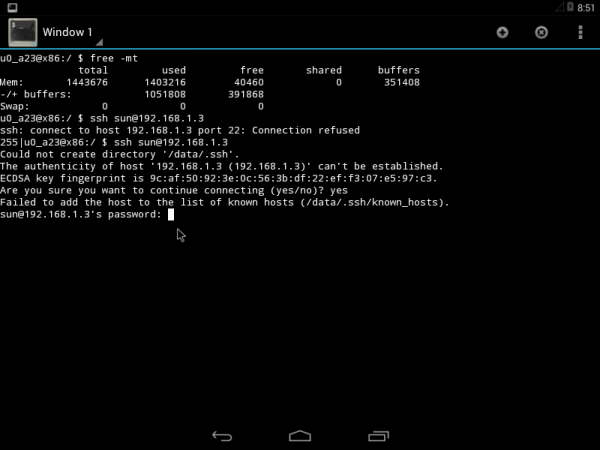 It can be somewhat disconcerting to be playing with the system and then have the screen suddenly turn sideways. That’s no big deal on a smartphone or a tablet, but in a virtual environment or a 21-inch all-in-one computer, it prompts you to look for a quick solution. 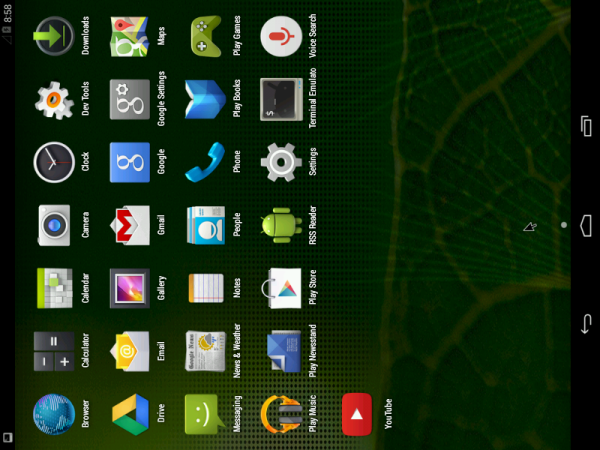 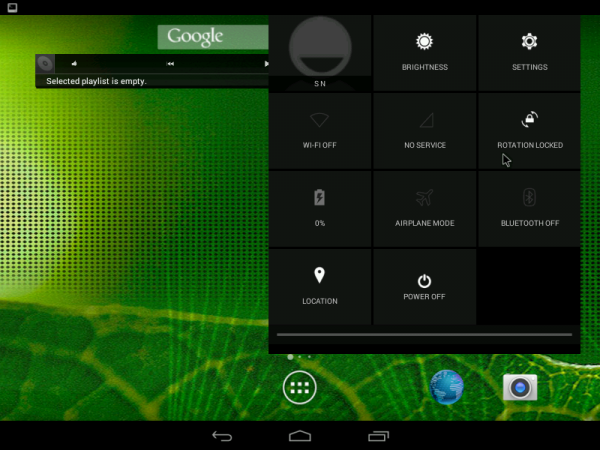 As I became familiar with the settings, there’s this feeling that all my information are belong to Google. I wish that there’s a truly Free Software/Open Source mobile operating system that I can use just like I use my Linux desktop. You know, one that does not funnel my whole digital life to some corporate behemoth. 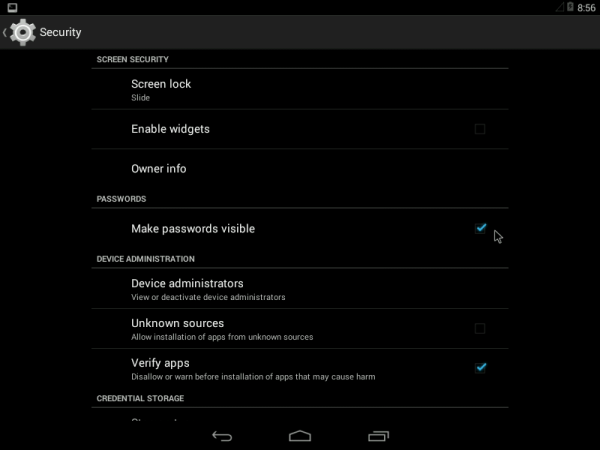 Replicant is an ongoing project, but it’s not moving in the same direction as Android-x86, and it lacks manpower. All that aside, I think Android-x86 is a good project. At least for people like me that don’t own an Android device and have no intention of buying one anytime soon, it enables us to play with the mobile OS. If you would like to do the same, you may download an installation image of Android-x86 4.4 RC1 from the home page.

AFAICT everything worked straight up on reboot,
and was watching Youtubes and surfing on internet, GoogleMaps etc etc in no time

..till my geek play time ran out and did not go further into it

I have installe it successfully and also it worked fine at startup but after reebooting almost all app crashed .plzz help mw with this issue.

Note that this is not a stable release, so app crashes are expected. Try the second release candidate, which was released a few days ago.

I booted from usb stick, but couldn’t manage to access laptop hdd. Could you manage it? If yes how.

Small know issue, no external monitor is taken in charge.

I have an Asus VivoBook S200E i3 (11.6″) which has a 10 point touchscreen. It cost me £388, so not much more than a netbook. It has 512mb graphics thanks to the HD4000 which is part of the i3. It runs Windows 8.1 beautifully, so does it with ubuntu and it is amazing with a Android. 4.4 really is a huge step forward. 20 second boot up times, and everything working out of the box except for the fact you cannot put it in sleep like with windows.

Hey , but when I try to sign in to Play store(over wifi and Ethernet) , it says either its a temporary problem or your device might not be configured for accessing internet . Please try later.

Has anyone else experienced the same issue??

And furthermore this is not the first time it is happening . It had happened with 4.3-devel version as well . But all versions before 4.2-devel had working internet (over wifi)

Well, is your installation able to access the Internet?

I was able to install it on a hard drive.
1) Clear all ald partitions.
2) Insert live cd
3) Install as defaut msdos
4) Create a linux ext3 partition
5) Complete install
6) Reboot
7) Works great on an Acer 5735 laptop

Did you install GRUB or did you pass on that option?

Not working. System will work after a reboot.

Have you tried the RC2?

Yes I just tried it , the installation seems to goes well but after a reboot it hang to a blank cursor… Look like the hardware isn’t compatible.

Hello, i found a way to have it working.
Install in EXT3 with GRUB and it’s working now but I have a hardware issue, the screen resolution is off and it’s like 640×480 🙁
Will wait for another version….

I tried it but I couldn’t use the French AZERTY keyboard, only the English QWERTY keyboard. If you’ve got an idea to change the keyboard…

Hmmm, youtube app is up-to-date but is crashing on me. Works OK on my 4.0 installed version. 4.4 Live mode plays youtube vids with good picture and sound in Chrome.

I found the 4.4 RC1 pleasingly zippy when booted in Live USB mode on an old Acer One AO150 netbook (single core Atom N270 with 1 GB RAM). I have been running an installed Android x86 4.0 on the same machine and find it useful for learning.

One goal of the last few Android x86 releases was to eliminate machine-specific versions. I used to use the EEE PC build, but can now run the generic build.

Android performance on that hardware is about equivalent to running Crunchbang Linux (Debian 7 with Openbox) via multiboot. Windows XP Pro is slower, but usable, on the same hardware.

One minor point about x86 Android is that “disk” encryption appears not to be supported. Otherwise, it seems to be full Kit Kat.

Kudos to the Android x86 team.