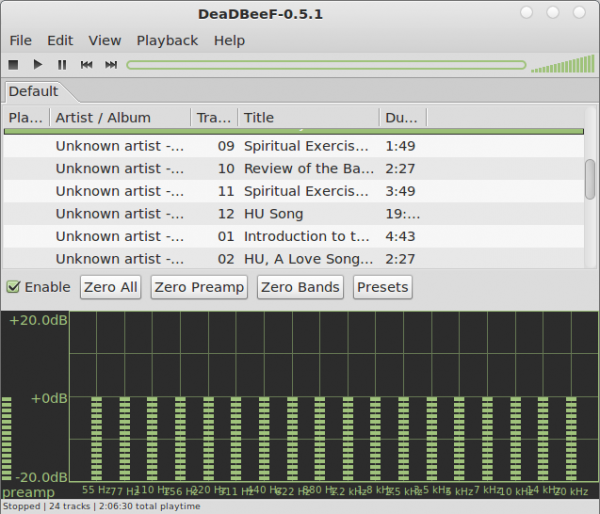 DeaDBeeF aside, Linux Deepin 11.12.1 comes with a respectable set of applications installed. You will find, for example, Empathy IM client installed, Flickr Uploader, Mozilla Thunderbird email client, Firefox, LibreOffice suite and GNOME Sound Recorder. Those are besides the standard GNOME desktop accessories and system utilities. Only three games are installed – Mines, Mahjongg and Quadrapassel. Other applications that are not installed, can be, with the help of Deepin Software Center, the graphical application manager.

Deepin Software Center (DSC) is a beautiful graphical application manager. Below, is a screen shot of the top section of its main interface. Aside from the fact that it offers a choice of themes (six), access to it requires authentication, which means that, unlike the case with Ubuntu’s Software Center, when you want to install multiple applications, you are not forced to authenticate for every single one. 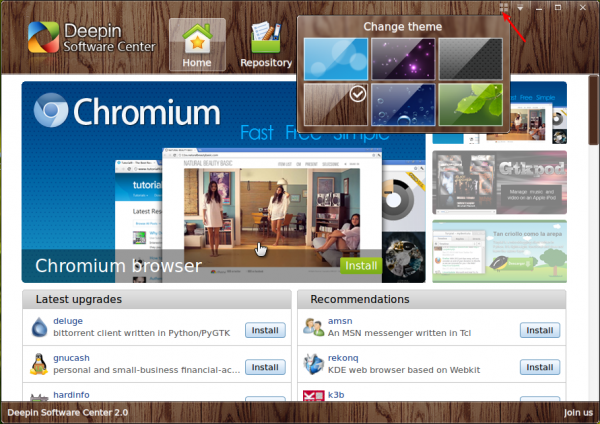 This is a screen shot of the lower section of the main interface, Aside from the names and brief descriptions of the applications, I think having the version number next to the name would be good too. Another thing about DSC is that it does not bother you with information about dependencies. It just starts downloading an application when you click Install. Whether this is desirable or not is open to debate. 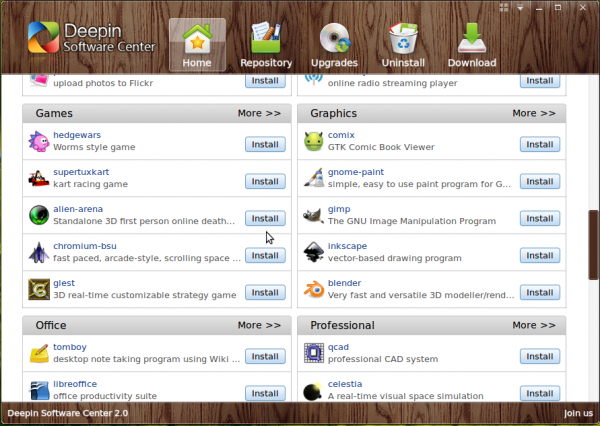 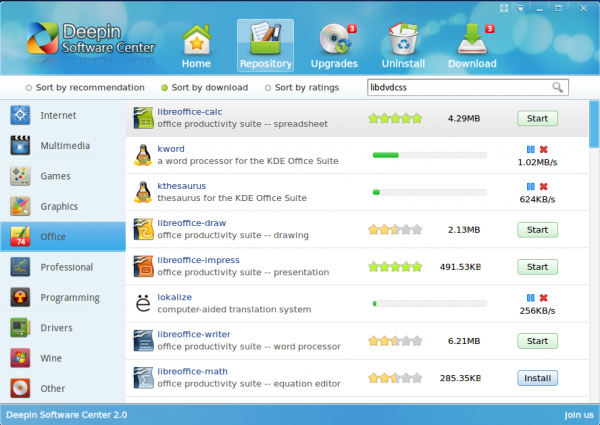 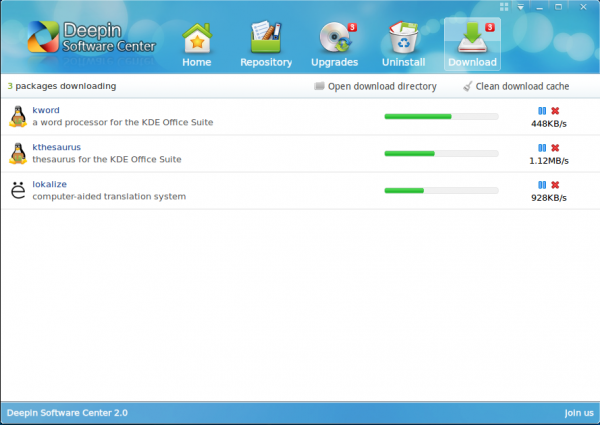 By default, DSC is not configured for periodic updates checking. Rather, it checks for updates only when it is started. Virtually all desktop Linux distributions that have been reviewed on this website are configured for periodic updates checking out of the box. Some, like Mandriva, are configured to check for available updates every few minutes, while others like Ubuntu, Deepin’s parent distribution, are set to check for updates daily, that is, once per day. I think that is a reasonable default setting, so I do not understand why Deepin’s developers chose to downgrade this setting. 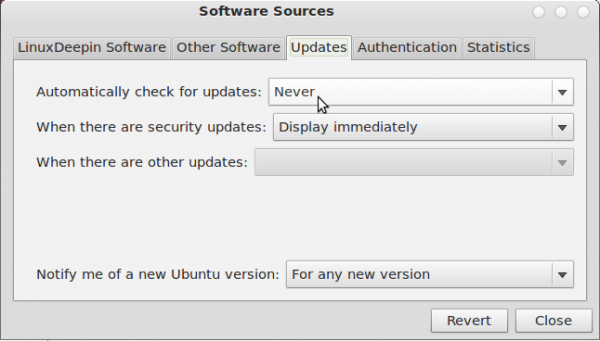 From a network security angle, a default installation of Linux Deepin 11.12.1 leaves you computer wide open for the bad guys to mess with. There is no network security layer, no firewall, just as the installer does not have any user-configurable physical security features. IPTables, the firewall administrative tools for Linux, and ufw (Uncomplicated Firewall), Ubuntu’s IPTables frontend, are not installed. Which means you will not find the init scripts for both tools on the system. And if the command line tools are not installed, it is immaterial whether Gufw, ufw‘s graphical interface is installed or not. For the record, it is not.

Also, the userland application for AppArmor, the mandatory access security application enabled by default on Ubuntu, is not installed. Though it and the userland tools for SELinux and Tomoyo, the other application-level firewalls for Linux, are in the repository. Deepin’s terrible, default security posture puts it in the same ignominious security category with SalineOS, a Debian-based desktop distribution that I recently reviewed. (See SalineOS 1.6 review.) You can enhance the security profile by following the instructions in this guide: How to install and configure Gufw on Linux Deepin 11.12.1.

Wenhuan and his crew have done a good job with this distribution, but a beautiful desktop interface must be coupled with a system that has a good security posture. Short of coding their own installer or forking one with physical security features, I do not think the developers can do anything about their distribution’s lack of basic physical security features, but all the tools they need to have a system that is secured from network attacks, are at their fingertips. I think they should be used. Despite this negative security profile, I think Linux Deepin should be on your distro-hopping list, if you are looking for a good, GNOME 3-based desktop distribution. You can improve the network security posture by installing just a few applications.

Resources: You may download a 32- or 64-bit installation ISO image of Linux Deepin 11.12.1 from here. Post support questions on the Deepin Community Forum or here in the comments box.

The desktop showing all installed applications. 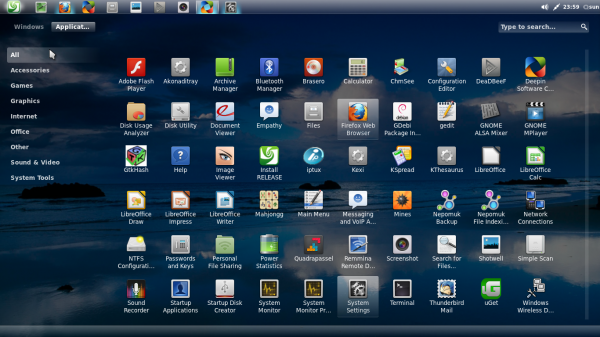 The desktop featuring a different wallpaper than the default. 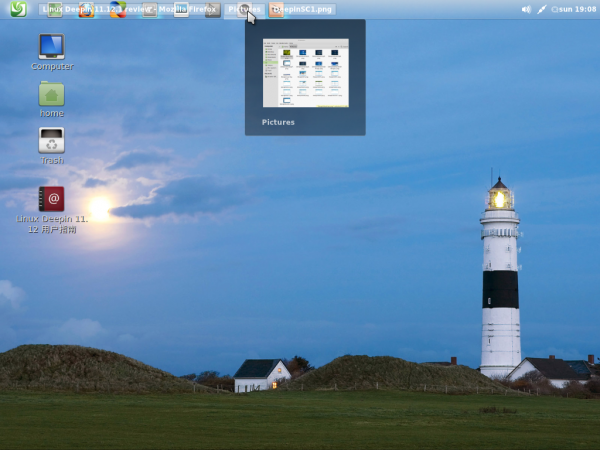 The desktop showing the notification docklet when an audio CD is detected. 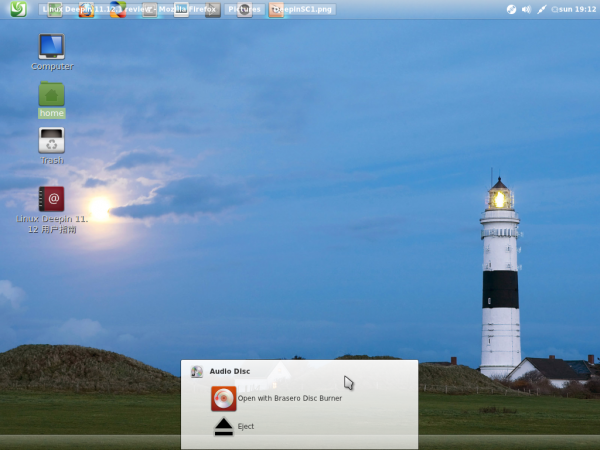 The desktop showing the notification docklet when a video DVD is detected. 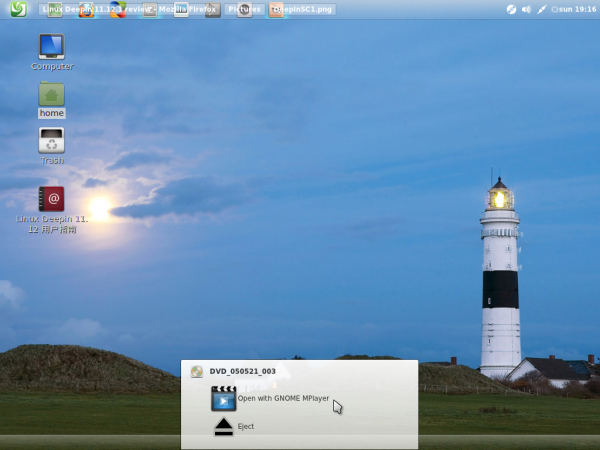