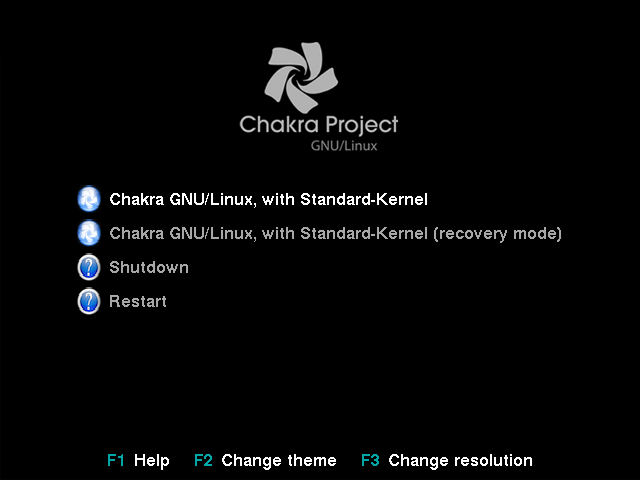 Bangarang (“a Jamaican word for noise, chaos and disorder”) is a music and movie player that is integrated with the Nepomuk indexing service. Courtesy of this integration with Nepomuk, Bangarang “has access to indexed media information and automatically shares its own media information, rating, tags and usage statistics with other KDE powered applications.” If you are not using Chakra, Bangarang is likely included in the repository of your distribution. I know that it is available in Ubuntu.

Calibre is an e-book management application with the following features: Library management; ability to “convert from a huge number of formats to a huge number of formats” or more simply, can convert many e-book formats; a modular device driver with support for many e-book readers; can auto-fetch and convert news from websites and RSS feeds to e-books; built-in e-book viewer; comes with a built-in Web server that essentially allows you to run a private e-book server.

QupZilla is a Qt WebKit (Web) browser installed by default. It is also listed as installable in the Bundle Manager, which, by definition, makes it a GTK application, which is kinda confusing, unless there is some thing abut QupZilla and bundles that I am yet to grasp. In any case, QupZilla feels very fast, much faster than rekonq, the default Web browser.

SpiderOak is a commercial cloud backup service that claims to offer secure storage for your data. It is similar to Wuala from LaCie (see is the Wuala cloud storage service truly private?).

Tomahawk is a “socially-connected” music player “optimized … to play, discover and share music.” The main interface is shown below. 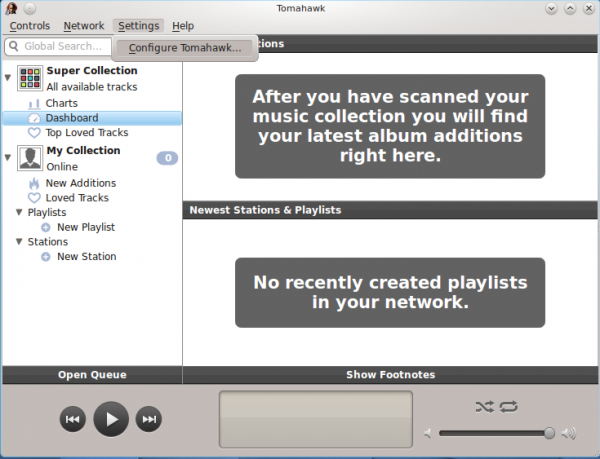 Many more applications are available for installation via AppSet-Qt, the graphical package manager, or as bundles using the Bundle Manager.

Final Thoughts: While I do not currently use Chakra on my personal computers (aside from my test machines), it is one of my favorite KDE-based distributions. Most of the pieces that could make it a perfect desktop distribution are in place, but they need to be made available users out of the box. For the next edition of Chakra, which should be released early next year, here are the features I would like to see made a part of the default installation, that is, installed or activated out of the box:

Those, of course, are just suggestions.

Resources: Chakra is a semi-rolling distribution, so if you are already running an installation of Chakra, you do not need to download this latest edition. Just apply all available updates and you will be good to go. The rest may download a 32- or 64-bit installation image from here. All interested may read the release announcement and post support questions here and on Questions & Answers. You may read all articles that has been published on this website on Chakra here. 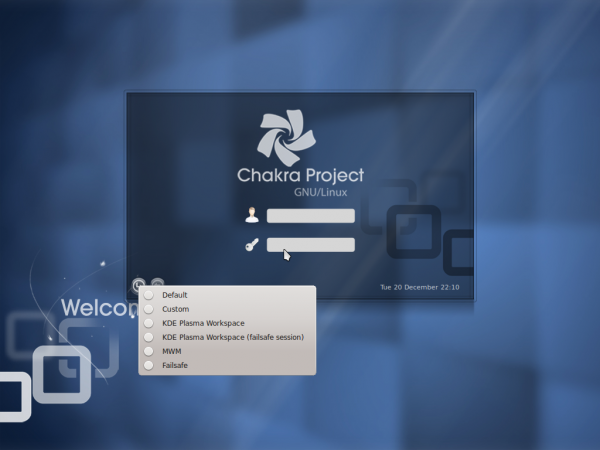 The default desktop with the Kickoff menu. 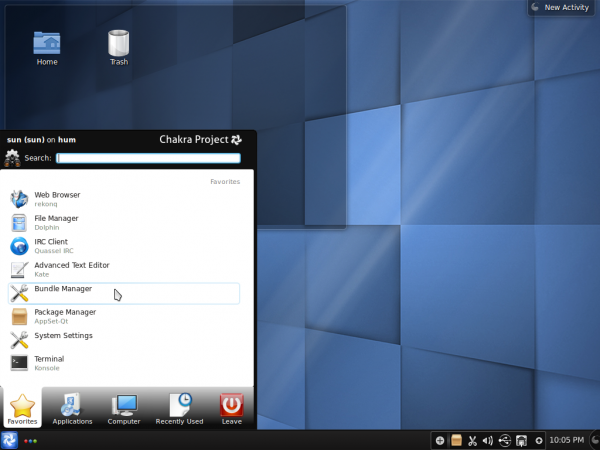 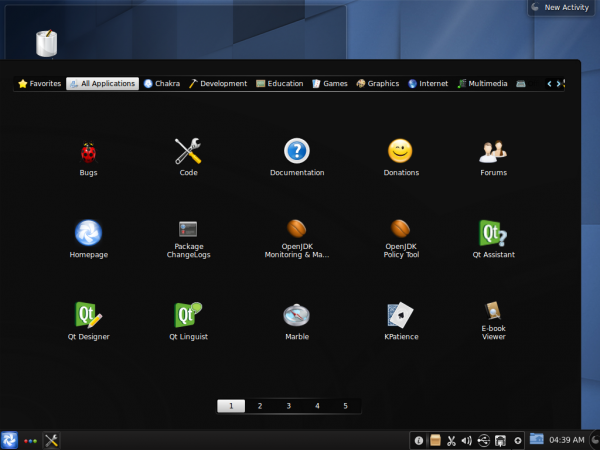 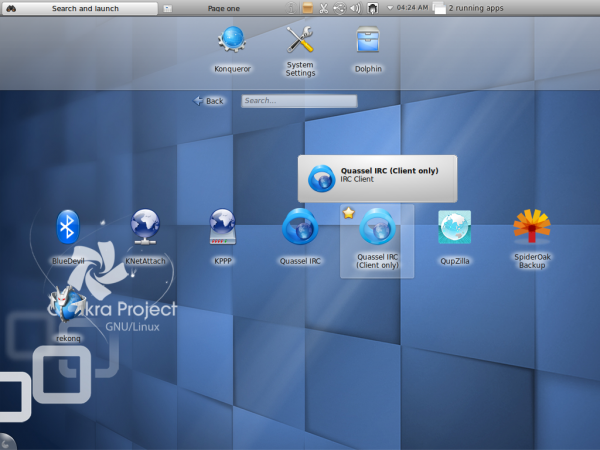 Multimedia applications from the same interface. 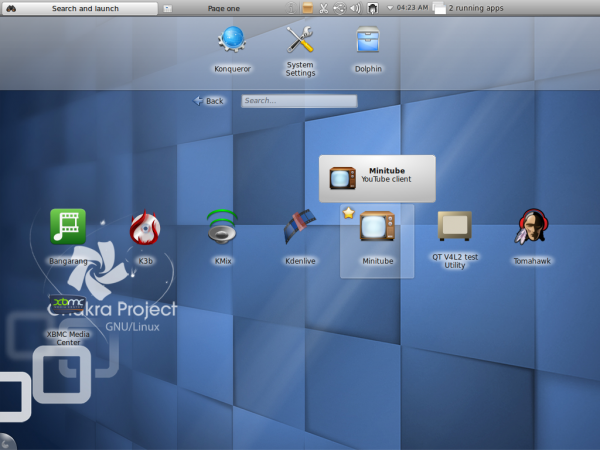 LibreOffice is the installed office suite in this edition of Chakra Edn. This screen shot shows the various components. 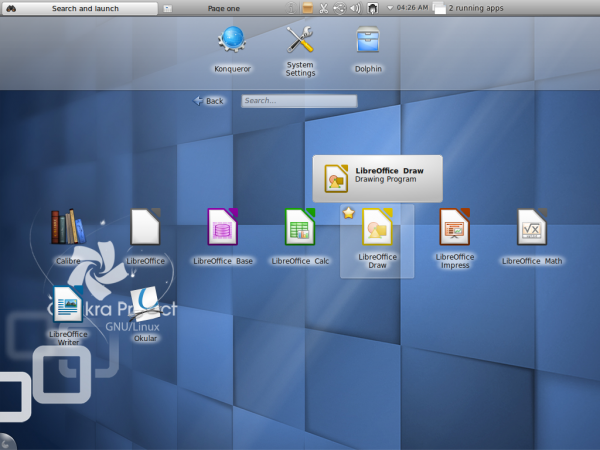 I disagree with the preset folders. Not including them is a feature, not a bad thing. I don’t want someone else trying to tell me what folders to use, I have my own naming convention. I delete such folders in any Linux distribution I install and make my own.

As for the takeoff menu, absolutely not. It looks horrible and takes up an ENTIRE screen of real estate, and it takes longer to get to an application than Kickoff does. This is your personal preference, not something that should be done by default. I can tell you from experience that if this was default in any distribution, it would result in user outcry.

I’m a chakra user and i’m happy they don’t have a preset of folders in home. It was always the first thing i removed to make my own folders,just like Ista above.

Cups i think i something most will need but isn’t hard to do if you follow the wiki.

I hope the stay close to stock kde, mostly you customize it to your own needs and that is for every user different. I rather put things in i need than remove things i don’t need.

And i want to compliment the dev people of chakra they are always ready to answer question in there forum/irc and stay always friendly. That was something i missed on a few other distro’s and one of the main reasons i stick to chakra.

I’m surprised you didn’t include full-disk encryption in your list of suggested features for the next edition of Chakra. 🙂

Your reviews and especially your tutorials are excellent, and really helped me in my move to Linux earlier this year. Two things I’d like to see you cover:

-How to implement full-disk encryption on a dual-boot laptop. (I keep my data is on a separate NTFS partition so I can access it from both OSs — I still need Win7 for some of my work.)

-Your take on the Enlightenment/E17 desktop environment. Bodhi Linux seems to be the most popular distro built around it.

just checked out chakra and was impressed with the live cd. im new to the arch branch so was very interesting. like the fact that xbmc is built into the packages as i have been trying to find a distro that will run this flawlessly.

I don’t think the lack of pre-populated home directories is a drawback at all. Unlike the distro reviewer, the typical user wants to migrate existing directories for other computers / partitions to their new one. One of the first things I do with any new Linux install is delete any directories under /home/myname and copy over my existing home directory structure. From my perspective leaving the home directory empty is a feature.

I think you mean “Chakra Linux.” Nobody calls it GNU/Linux except Richard Stallman and other people who want to give the FSF an inappropriately large amount of the credit for developing the Linux operating system.

Why must you expose your ignorance about the history of Linux or GNU/Linux in public?

GNU software and the Linux kernel are like the left and right hands on the same body.

Thanks for taking the time to do this review. Explanation for the qupzilla as bundle too. All bundled browser include the flashplugin (which ofc cannot be included in a GTK2 free ISO), since many user like to keep their system GTK2 free, it was requested that at least one Qt browser was available with flash bundled-in too.
Chakra –as noted in a comment of a previous review, and explained in the welcome-plasmoid– never intended to make all the decisions for the user. I’ll quote the goal of Chakra:
“The Chakra Project is dedicated to providing a pure KDE/Qt desktop operating system that is simple and transparent. The LiveCD is an important tool and key to the user’s first impression, while the half-rolling release model ensures cutting edge features with solid system stability and long life. Simplicity is great for users new to Linux, but simple doesn’t mean that you won’t have to learn anything. Getting the most from Chakra requires a certain level of competency and is more focused toward KISS-minded users who aren’t afraid to get their hands dirty. However, if you are willing to learn and put in a little effort, Chakra is an excellent distribution to start with. It requires a minimum of distro-specific knowledge, and it’s bare-bones install is rock-solid and easy to manipulate. There is also a wonderful Beginnerâs Guide available in the wiki, helping to guide you through the process of learning to use Chakra, KDE, and thus Linux, from the beginning.”
This applies to any settings, folders, firewall, security, the tools are available, it is the users choice how to use them.

maybe qupzilla is in the bundle cause it’s qupzilla+flash?

Why would they need to bundle qupzilla+flash when QupZilla is pre-installed and Adobe Flash is installable from AppSet-Qt?

I must say, Chakra Linux is really getting my pumped up. It seems a realy polished, well thought, well implemented OS. IMHO, i think there are some shortcomings, besisdes the ones mentioned on this very detailed review,like the lack of a dedicated email and chat applications. I recommend Kontact an telepathy, because they are kde native. The security features should be all on by default, tomoyo included… even if there is a tutorial on their wiki, using the terminal isn’t the most intuitive way to configure the os, for some users. I’m really glad to see this OS with such great potential continuing to release new native applications and bundles with each release to pleaase everyone taste… it is really the way to go. On a final note, would like to, if possible, contribute to this project… i don’t have much experience with things like this, but seeing this OS growing so fast (congratulations on your 6th place of most rapidly growing projects!) and with so much potential, i really feel like contributing, even a little, to make this a great distro. Very well done! best pof luck!