Chromium, a Webkit-based Web browser, is the default and only Web browser installed, and when you first log into the system, you will be presented with the window shown below. You will have to choose one or you will not be able to use Chromium. Firefox 4 and Opera are in the repository, but not installed. I do not know why Firefox is not installed by default, but if we are at the stage where Firefox is not installed on a Linux desktop distribution, I think it (Firefox) is about to go the way of Netscape, at least on Linux desktops.

Though XBMC is installed, I could not use it because it could not start when I attempt to launch it from the menu. Attempting to start it from the command line generated the error message shown below. I did not investigate why. I think it is enough to just report that XBMC Media Center does not work on Sabayon 6 KDE.

With Adobe Flash 10.2 and Java JRE installed, any Web browser you use will render all Flash content, and also pass the Java test. And with libdvdcss, a portable abstraction library for reading encrypted video DVDs, installed, VLC, the only video player installed, can play both encrypted and encryption-free video DVDs.

In my review of the KDE Spin of Fedora 15 (see Fedora 15 KDE review), I reported that the device notifier has a habit of popping up anywhere on the desktop, including in the systray, which is its actual location. While testing the handling of audio and video media in the course of this review, the device notifier would popup either in the expected location, or atop the menu’s icon. Actually, when an audio CD is inserted into the optical drive, the device notifier does not appear. Only when a video DVD is in the optical drive, does it popup. But none of the four available actions has anything to do with playing a video DVD. So unless you add a device action in the Device Actions configuration module of System Settings, the only way to play a video DVD on Sabayon 6 KDE is to launch VLC and choose “Open Disc” from the Media menu. 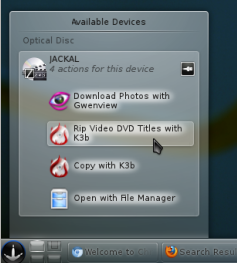 Package Management: Entropy is the package management framework on Sabayon, with equo as the command line client and Sulfur, the graphical frontend. The image below shows the main window of Sulfur. And that is the Simple View. It has gotten better with each release, but one thing I do not like about it is the default color scheme, which makes it slightly difficult to read. Combined with the default sorting method of including an application’s category atop the list, it can be visually painful to use. 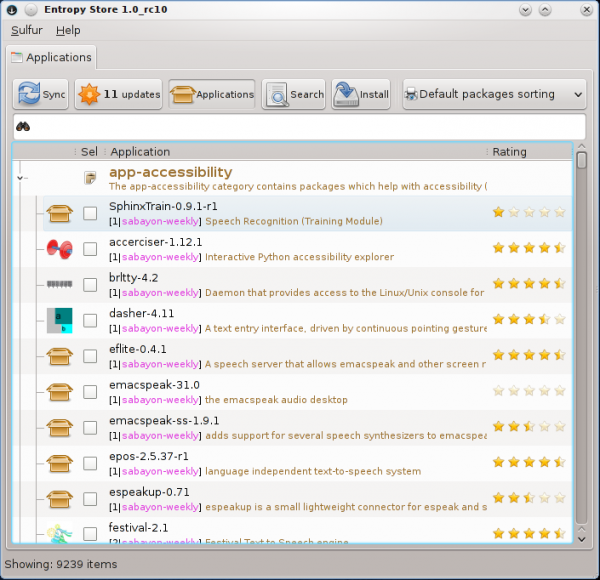 So the first thing I always do with Sulfur (or to Sulfur) is change the sorting scheme, and to have access to all its features, enable the Advanced Mode (Sulfur > Advanced Mode). In both the Advanced and Simple Modes, the search features cannot search across tabs. So, always ensure that the right tab is in focus if trying to look up an application. Else, a “Nothing found …” message in the main panel could make you believe that the application is not in the system. To make up for its inability to dynamically search across the tabs, you can type a search string in the search field and manually search “across” tabs by clicking them one after the other. 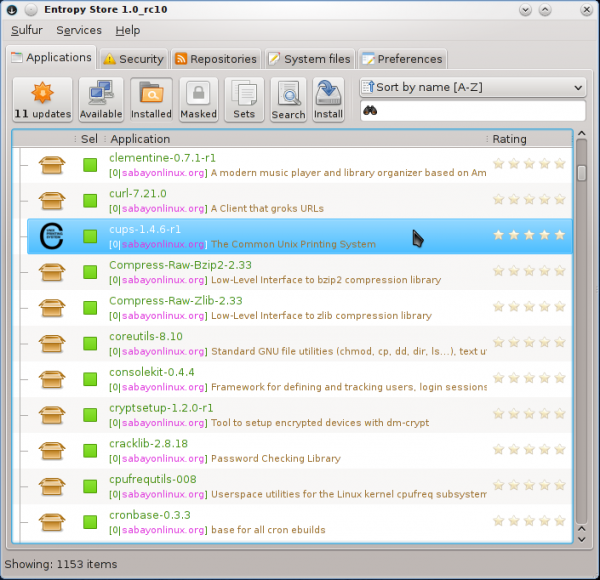 Magneto, the update notification application, will start and check for updates on bootup, but it has yet to have any configurable options that I can see. So, after bootup, subsequent updates checking have to be initiated manually by right-clicking on the applet in the systray and selecting “Check for Updates.” Besides the manual update option, you may also launch the packages Web interface. The Web browser-based interface, accessible from http://packages.sabayon.com gives you ready access to the full list of applications available in Sabayon’s repositories. 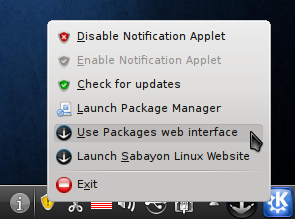 Sulfur’s database backup feature lets you backup and restore your installation’s packages database. It can come in handy if you want to apply changes to the system that could be potentially mess it up. By backing up the database, you can restore it, if something does go awry. 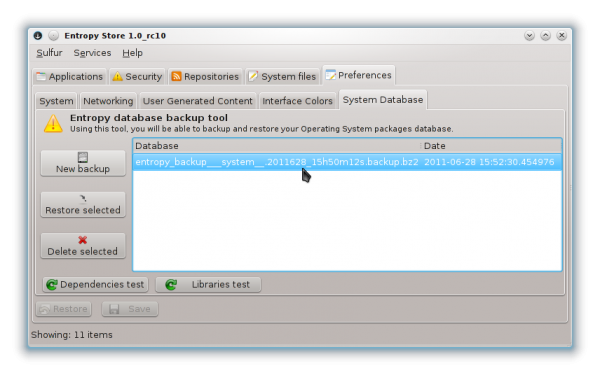 There are three repositories configured out of the box. There was really nothing for me to do here, so I tried to see if I could move the entries up or down using the arrows. I did manage to move the enabled repository (sabayon-weekly), but after that, the arrows ceased to respond to mouse clicks. 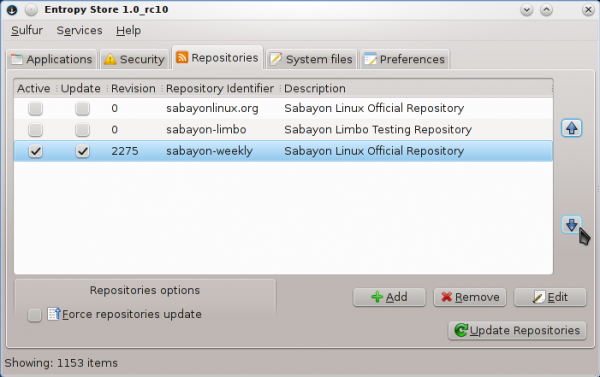 I have a pretty good idea what to see in the Security tab, but on two installations, one in a virtual environment, and the other on real hardware, it is still loading, and I am still waiting. How long does it take to load security advisories on an installation of Sabayon 6 KDE? Is it taking forever because there are no security advisories? 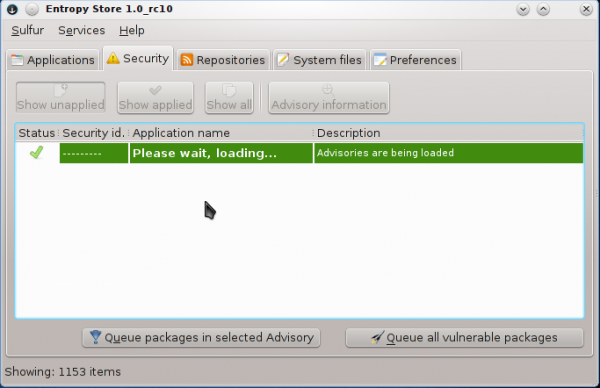