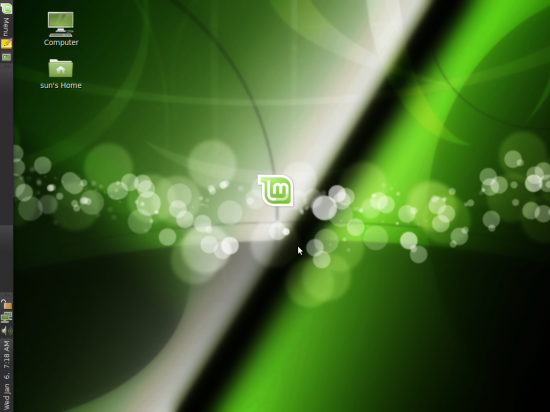 Linux Mint 8 (aka Helena) is the latest version of the popular, desktop-oriented distribution. Helena was actually released late last year, but I’ve just gotten around to reviewing it. As with prior releases of Mint, Helena is based on the latest version of Ubuntu, which in this case is Karmic Koala. For this review, I’ll go through the features of Mint 8 that I consider to be good, not so good and those that I think are bad.

But before reviewing a running Linux Mint 8, let’s see what the installer has to offer.

Installation: If you have installed earlier versions of Mint and Ubuntu, you won’t fine any major feature enhancements in the installer. It still does not support setting up LVM and RAID. All the journaling filesystems – ext3, ext4, xfs, jfs, reiserfs – are supported, with ext4 as the default. 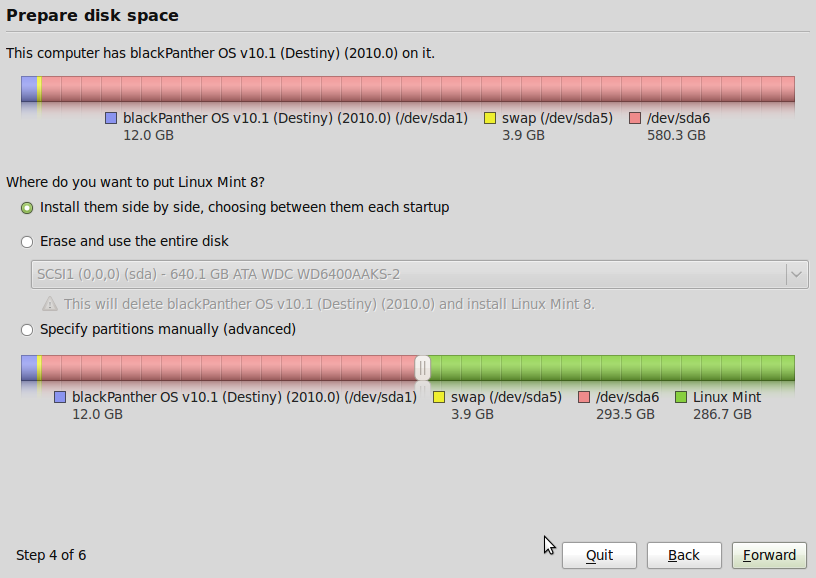 You may choose to encrypt /home 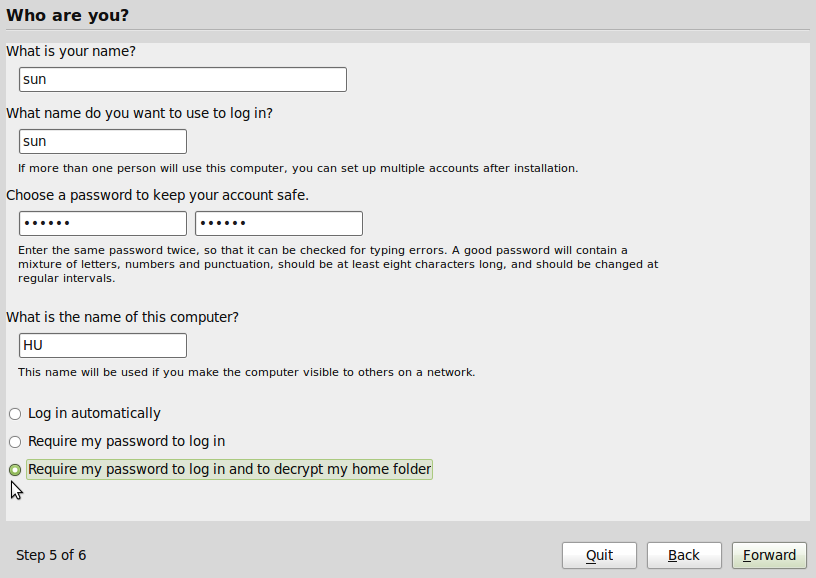 Ok, that’s it with the installer and the installation process. There’s not really very much to write about it. How about the running system? Let’s start with the good.

What’s Good? The Mint team has been doing everything they can to make their distro as user-friendly as possible. And it just keeps getting better with every release. For starters, insert an audio CD, and the system will respond with a dialog box prompting you to play the CD with Rhythmbox, the default audio player. 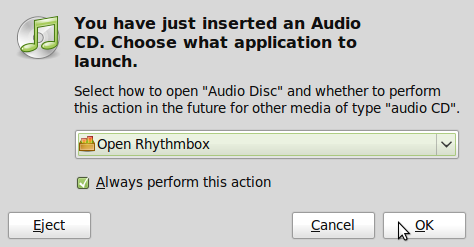 You get the same response when you insert a DVD video. This time, however, you are prompted to play it with Totem, and with libdvdcss2 installed, Totem will play all your encrypted DVD videos. In contrast, Totem installed on ALT Linux 5 Ark Desktop, on Simply Linux 5, and other distros I’ve reviewed will not play commercial (encrypted) DVD videos out of the box. 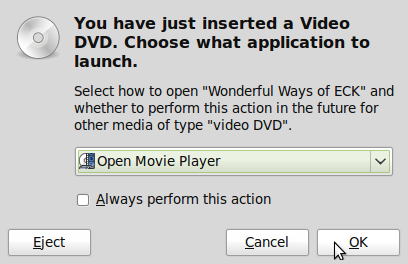 As with all recent releases of Linux distros, hardware detection is excellent, and the system will detect and automatically configure a connected printer. My Gear Head webcam works.

Linux Mint 8 makes it very easy to search for and install an application right from the menu. One of the options the system presents to you when you type the name of an application into the filter box is to install it, that is, if the application is not already installed. 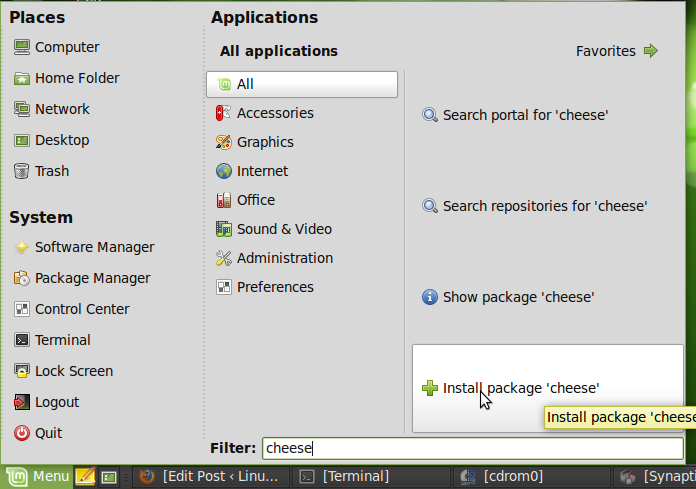 Aside from being able to search for and install software from the menu, Mint 8 offers other avenues to manage applications on the system. Synaptic, the graphical interface to the package manager, and the Linux command line are the two well known package installation avenues. A third software management tool is mintInstall, also known as the Software Manager. This is similar to Ubuntu’s software manager, but with more mature features. Keep in mind that there are certain applications that you can install using Synaptic or from a shell terminal that are not available from mintInstall (Software Manager). 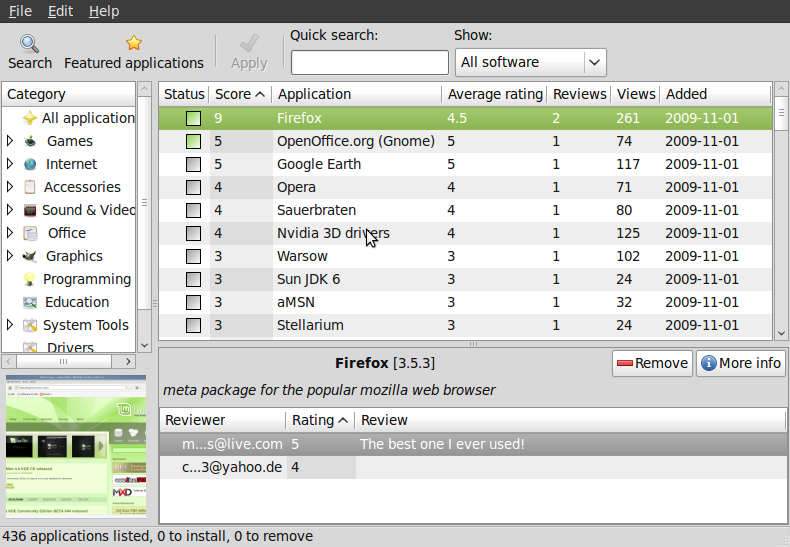 From the featured applications window of the Software Manager, you can install some of the most popular applications available in the repos. 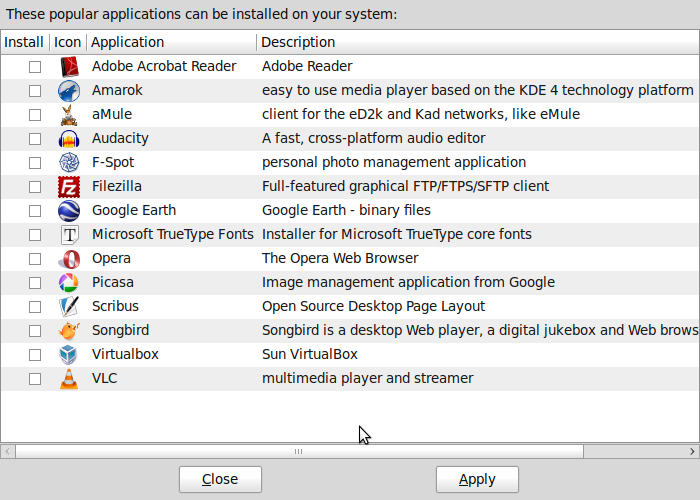 The default (and only) browser installed is Mozilla Firefox (version 3.5.3), and it packs all the plugins it needs to render multimedia applications – flash, Java, quicktime, etc.

What’s not so good (or not too bad)? Like Ubuntu 9.10, the distro it is derived from, Linux Mint 8 comes with ufw, the Uncomplicated Firewall, running out of the box. However, unlike Ubuntu, Helena pre-installs Gufw, the graphical interface to ufw. Which is a good thing for those not familiar with setting up IPTables via ufw’s uncomplicated interface. What’s not so good is that Gufw is disabled out of the box. This does not in any way affect the default configuration of ufw, but it is always nice to have these tools properly configured for inexperienced users. 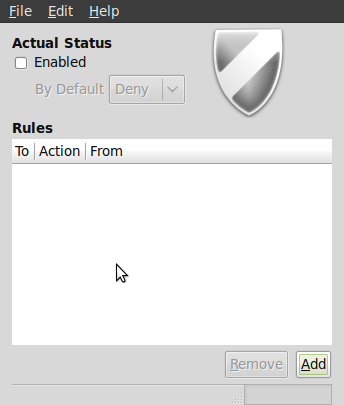 One of the nicest features of Pardus is the Kaptan application. What Kaptan is is a first-time, welcome application that gives a user the opportunity to customize a fresh installation of the distro. It can also be called up at any time after installation. mintWelcome, Linux Mint’s welcome application, is an attempt at that, but it does not offer the same features that you’ll find on Kaptan. In addition to the list of items on mintWelcome, here are three that I’ll love to see added: 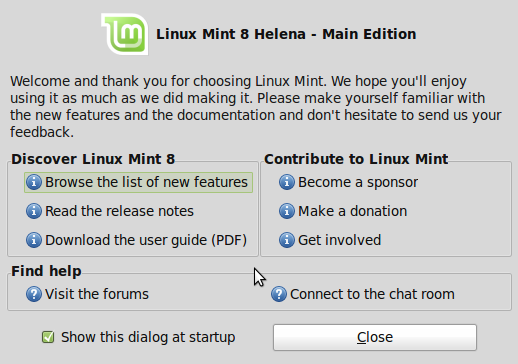 Either use
Ubuntu with cinnamon package (available in Ubuntu 13.04 & later), to have Linux Mint & Ubuntu experience
or use
Zorin OS, Ubuntu based OS with Windows XP / Windows 7 like look with all codecs included

Actually I’ve gone back to Linux Mint 8 after trying and using mint 9, and Xubuntu 10.04, Mint 8 is just a lot more stable, flash is clearer, less choppy, all programs work without a problem, wine’s a lot better, and my Panasonic Camera works way better through G-Thumb on 8, I can’t stand F-Stop, also you may want to point out neither Windows nor Mac have anything close to Digikam as a digital darkroom without forking over some heavy $$$, I also like Digikam 1.0 over the newer version, just a few thoughts

wow, i’m encourage with the comments. haha. i haven’t actually tried linux mint 8 but i’m planning to and actually downloading now. i’m currently using mac os x snow leopard and windows vista at my macbook and windows 7 at my desktop. i am wondering if windows application runs with linux? i mean, i am using a lot of windows application (like mixcraft 5, guitar pro, etc.) and cant just abandon them because i cant find any software compatible with mac that’s why i cant leave windows easily. (or should i say, cant still be free from microsoft. hehehe). i think i’m just afraid that i may not perform my task as well as i did in windows. but i really want to use linux mint because i’m amazed with it. i think some orientation and advices from a pro linux user might help. thanks and God bless

Glad you are about to try Linux. Unless there is a Linux version of your Windows application, it will only run on Linux courtesy of an application called Wine. Since you are into music, I think you should know that there are similar applications on Linux, and like virtually all Linux applications, they are all free.

Mixcraft 5 and Guitar Pro set you back about $140.00. Similar applications on Linux are free. The only thing it will cost you is the little time it will take to learn how to use them. Since you have a Windows 7 desktop computer, you may download a Linux distribution (distro), install it side by side with Windows, and play with some of the applications that you might need to replace Mixcraft 5 and Guitar Pro and other Windows applications that you currently use. Since you are downloading a live CD distro like Mint, you could test it without installing it on your computer.

Also there are Linux distros specifically for audio and video professional and amateurs. You can download these for free also. See Linux Sound for a list of resources to start with.

thanks for a quick response. i really wanna explore anything that was good. if there are some useful application for music in linux, maybe i wont hesitate to switch.. thanks a lot. i think i can count on you if i need to know something about linux, and soon, many question will come. hehehe. thanks again and God bless

I’m a newbie to linux mint.I’ve played around with distros in the past but I have to say,I think that this distro will change the mind of many windows users.(like I used to be)It has it all.It’s simple to navigate,has lots of great programs and add-ons,and hey,it even looks pretty sleek.With the ability to play mp3’s as well as almost any other audio/video codec you throw at it,it’s just too attractive of a package to turn away from.I’m only 2 months into helena and I don’t think I’ll ever buy another copy of windows ever!Thanks to everyone working on this project.You’ve finally freed me from the tyrants at microsoft!

Thanks!It is true freedom.Mint has everything I was looking for.I just can’t brag enough about it to windows users.The desktop effects alone just blow anything Vista or 7 has out of the water.There was a slight learning curve but once you figure out almost anything you need like cd or dvd burning,graphics card drivers,or browsers are in the repositories.You’re all good.choose what you want and install.If you need some windows item like word,theres the option of Wine to install with.Try installing something Linux on windows..lol So thank you for welcoming me to freedom and the Linux community.

Thanks. Stop by often, and take a look at http://LinuxBSDnews.com for daily news from the community.

linux mint is excellent, I use it as an I.T professional not as a beginner. The fact that you can rely on Ubuntu for support I hope they will incorporate DansGuardian like the Christian Ubuntu has for there domain/family filter. They also need to incorporate RAID into the installer or provide an alternative installer like Ubuntu
Steve