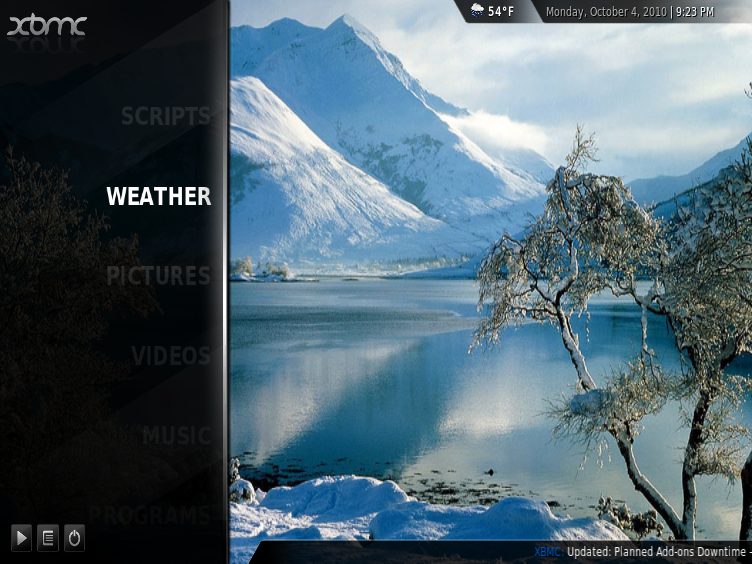 Sabayon 5.4, released at the end of last month (September, 2010), is the latest version of the Gentoo-based, multi-purpose Linux distribution. This is the third release this year. The other two releases, Sabayon 5.2 and 5.3 were released in March and June respectively. Going by the recent history of this distribution (there were four releases in 2009), do not be surprised if we get one more release before the end of the year.

Because Sabayon has a separate installation image for the major desktop environments, and my review of Sabayon 5.3 was based on the GNOME edition of that version, I decided to base this review on the KDE edition. The rest of what you are going to read, therefore, is from a default installation of Sabayon Linux 5.4 KDE.

Note: Two images shown in this review were taken from an installation in a virtual environment, but the other images and all the observations were made on an installation on real hardware – an Intel Quad Core PC with 4 GB of RAM.

Installation – The installation program is the same that made its debut in Sabayon 5.3. This is Anaconda, the Fedora installation program. There is support for full disk encryption, the Linux Logical Volume Manager (LVM), soft-RAID, and installation to remote storage devices. LVM is the default disk partitioning scheme, and the installer creates three logical volumes (for /, /home and swap). A new installation of Sabayon 5.4 takes up less than 6 GB of disk space. Ext3, ext4, xfs, jfs, reiserfs are available journaling filesystem options. Btrfs is also supported.

Useful Links: How to configure full disk encryption on Sabayon. Sabayon installation guide. How to install Sabayon on a btrfs file system. All tutorials were based on Sabayon 5.3, but they are also applicable to Sabayon 5.4.

The installation image for Sabayon is a live CD, but there are options on the boot screen to install straight to hard disk, bypassing the live environment. When I chose the Graphical Installation option, the installer froze at step 9, which is the step where the installer presents the disk encryption and all the disk partitioning options. I had to boot into the live environment, where the installation completed successfully. This is the same issue I reported in my review of Sabayon 5.3. I guess the developers did not have the time to fix it before rolling out another “stable” version in less than four months. 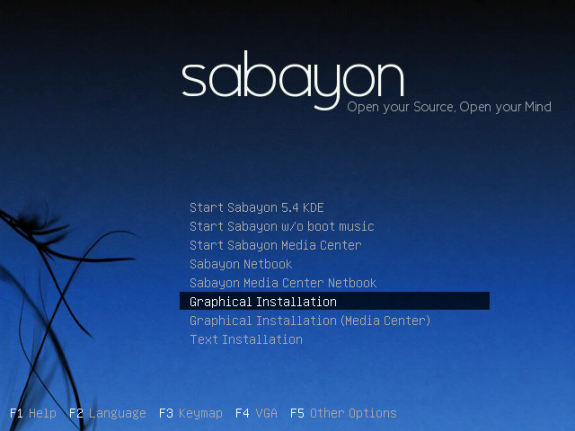 Desktop – Sabayon 5.4 KDE ships with KDE 4.5.1, the latest stable version of the K Desktop Environment. 3D desktop effects is enabled out of the box, but the wobbly windows effect is not as smooth as that produced with CompizFusion. 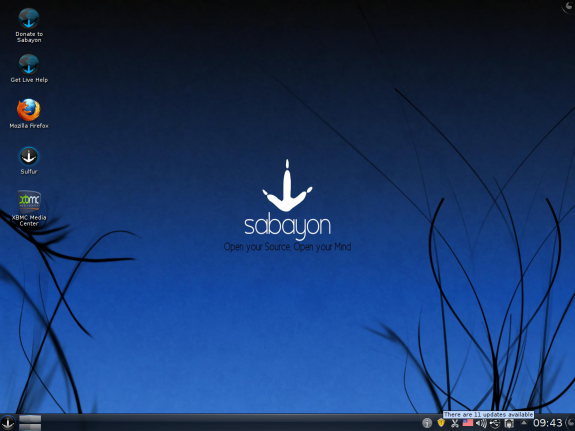 Conspicuous by its absence is the Amarok music player, now replaced by Clementine. Clementine’s UI is not as sleek as that of Amarok, Rhythmbox or any of the other music players, but its features seem to have impressed enough to merit inclusion in the list of applications installed by default. I am not sure if this is on Sabayon only, or a KDE-wide replacement. Other free and proprietary tools are available in the repository, and can be installed easily from a shell terminal or with the graphical package manager.

Package Management – Here is an excerpt from the section on Sulfur, Sabayon’s graphical package manager, in my review of Sabayon 5.3:

Sulfur is the graphical interface to Entropy, Sabayon’s binary package manager. It’s getting better with every release. It’s especially more fun to use in the advanced mode where there are more features available. One feature that is both good and bad is the search feature. Good because it is very fast, and bad because it cannot search across tabs. For example, if the Available tab is in focus, your search result will be limited to available packages. 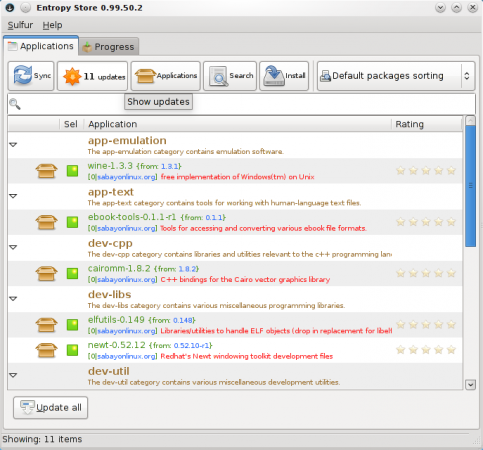 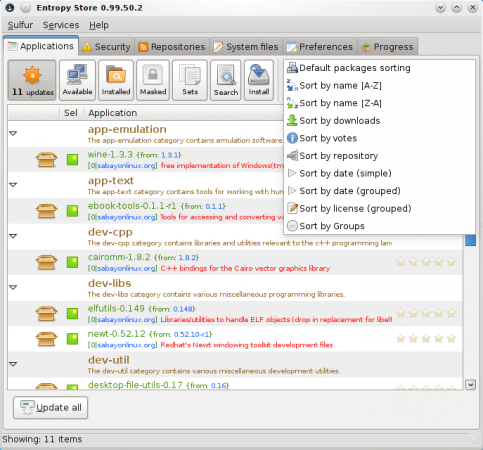 Concerning printing, I know that you expect them to be configured by the operating system during install or when plugged in, however, I got my HP printer to work by first installing the “hplip” package, as outlined on the wiki. Sabayon 5.5 seems to be working fine here.

I agree, keep up the good work, thanks.

It is a brilliant project and while trying to put a user friendly face onto Gentoo is a challenge it may help open some users eyes to the possibilities of FOSS and perhaps get some clever new converts to the Source.

I recommend the reviewer grabs a Gentoo stage tar and customizes Gentoo to be a little like Sabayon, then perhaps enlightenment may occur…

We do appreciate you taking the time to review Sabayon Linux. In your final thoughts sections you questioned twice why we would have so many releases per year. Please realise that sabayon staff may be few in number, but we’re very accessible to ask these questions to.

Despite our small numbers, we do our best to cater to our users desires. One common complaint we see is from people who download the latest version, then get upset when they have updates that are near to, or in excess of the size of the ISO they just downloaded. Many get upset with 300 updates, let alone near 1000. When the updates from the original ISO start to get close to or exceed 2 gigs, it’s helpful to put together another image. Yes, Sabayon is rolling release, but many new users don’t grasp that concept fully and may forget to upgrade for a few months. While it’s possible to upgrade from 5.0 to 5.4, many new users lack the patience and knowledge to navigate through that. For most distros a frequent release cycle is more of a courtesy to less experienced users than it is for publicity.

Yes, Sabayon is rolling release, but many new users don’t grasp that concept fully and may forget to upgrade for a few months.

A good update notification tool should solve that little problem. If you have an update notifier that can be configured to check for updates per any time period rather than only when the computer reboots, then you just solved that problem.

I brought up this point in my review of Sabayon 5.3 and 5.4, and it was discussed in the Sabayon dev mailing list. Is it going to be addressed before 5.5 is released?

“offer nothing more than a few applications and kernel updates.”

At some point the package diff between version 5.3 and current tree state are so big (e.g. 1000 package updates) It makes sense to push out a new version. It doesn’t make users happy to install 5.3 and need todo 1000 package updates to be current. 5.0,5.1,5.2,5.3 users that kept their system up2date never had to (re)install. It is what is called a rolling release.

darn right. I started at 5 oh and upgraded very smoothly to the current version

Only reason for very frequently releases I see in order to obtain more popularity,on Distrowatch etc.

Maybe so. But there are positive reasons for it too. If I am a fresh installer, I do not need too much updating to get an uptodate system. Therefore having frequent releases is a wise choice specially since I find Sulfur a touch slower than Synaptic.