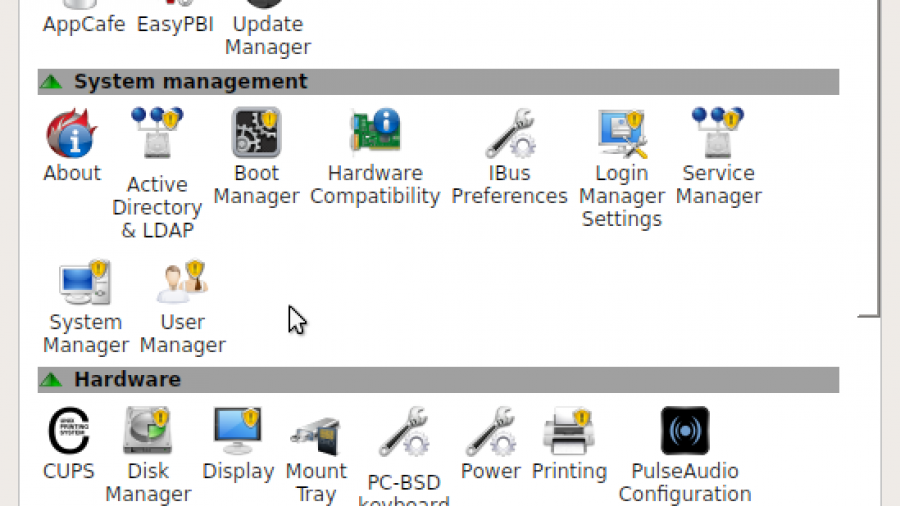 The last PC-BSD release I reviewed was PC-BSD 10.1. And that was actually just late last year. You may read that review at PC-BSD 10.1 review.

It was the worst edition of any distribution I have even reviewed.

An installation of the Cinnamon desktop, which shipped with Cinnamon 2.2, was especially bad. Out of the box, it was unusable. When PC-BSD 10.1.1 was released (on February 2 2015), I knew I had to take another look at a Cinnamon installation.

So that’s what this article is about – a cursory review of an installation of PC-BSD 10.1.1 Cinnamon.

The test machine has an Intel Core i3 inside, and I used the integrated graphics. It’s the same machine that was used for the PC-BSD 10.1 review. All attempts to install PC-BSD 10.1.1 using the UEFI-aware version of the installer failed. So I used the standard installer. By the way, I did file a bug report about the problem with the UEFI-aware installer. Hopefully the issue will be fixed before the next release.

The Cinnamon Desktop: Cinnamon 2.4.2 is what you’ll get if you opt for a Cinnamon desktop during installation. By a mile, it’s better than the Cinnamon 2.2 desktop I used on PC-BSD 10.1. It still has bugs that should not have made it past a QA, but it’s at least usable. Figure 1 shows the desktop with the menu. 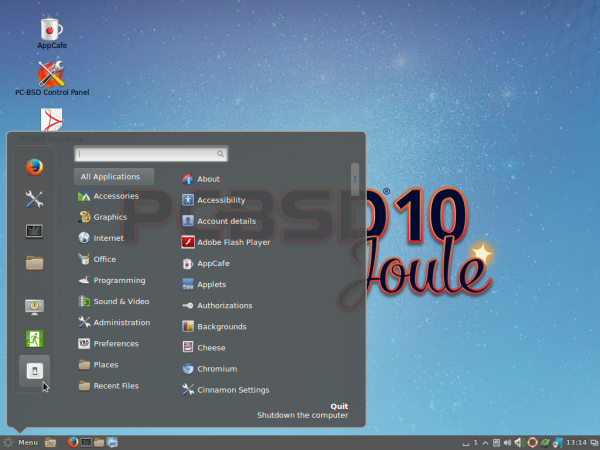 On first boot (and subsequent reboots), I got the notification shown in Figure 2. It’s about one or more applets, extensions or desklets failing to load. It said to check the system log and Cinnamon Looking Glass log for details. 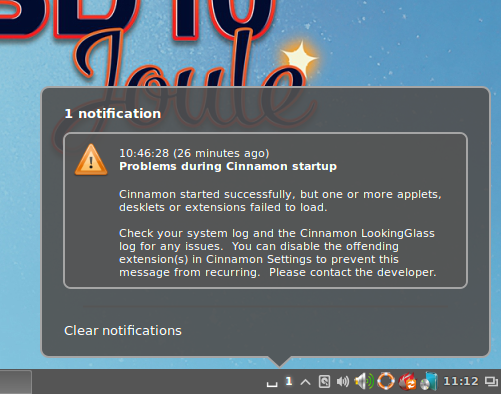 I chose to use the services of Cinnamon Looking Glass, but it wouldn’t start. After several such attempts, I tried the command line. I wasn’t in the mood to troubleshoot, so I left it there. 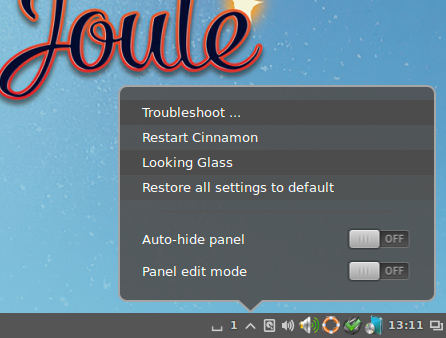 Figure 3: Attempting to start Cinnamon Looking Glass from the Cinnamon panel on PC-BSD 10.1.1

This code block shows the output I got on trying to start Looking Glass from the command line.

On PC-BSD 10.1, Cinnamon’s System Settings was a disaster. See PC-BSD 10.1 review for some screenshots. It’s a different story on PC-BSD 10.1.1. Most of the modules will open and their settings work. Only three modules were buggy: Users and Groups failed to open; Date & Time module opened, but I could not use it (see Figure 6); System Info opened to a blank window (see Figure 7). 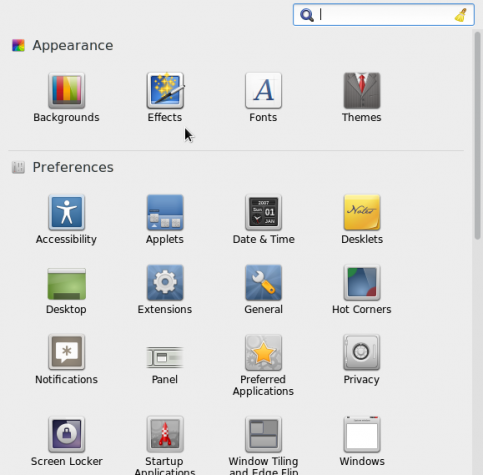 Unlocking the Date & Time module after opening it was its only problem. Apparently my user account didn’t have enough permission to unlock it, even though the account is a member of the wheel group. 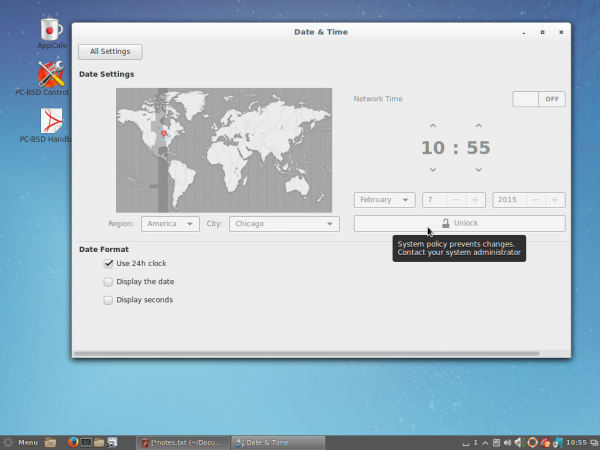 The grey, blank window of the system Info module. Not sure where its content went. 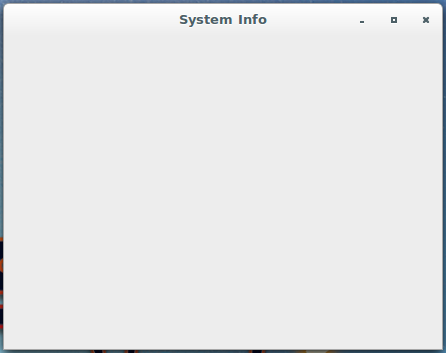 All the modules do share a minor bug. On clicking a module then returning to the main System Settings window, the module’s name disappears. Can you tell which module I opened before taking the screenshot shown in Figure 7? By the way, clicking any part of the window causes the name to reappear. 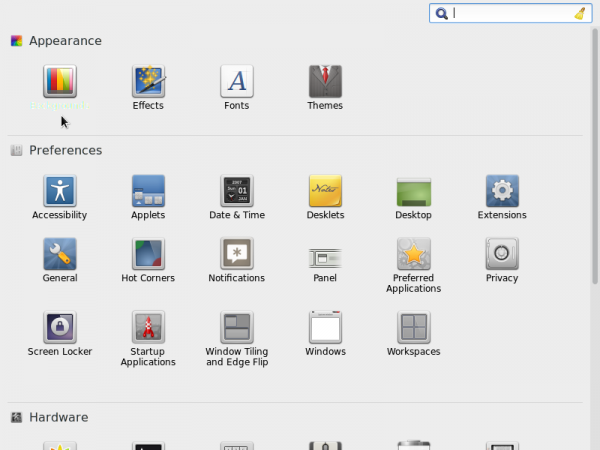 The other tool that has a minor problem is the PC-BSD Control Center, the graphical hub for graphical administrative tools designed specifically for the distribution. Not all, but many of its modules were missing all three titlebar buttons. 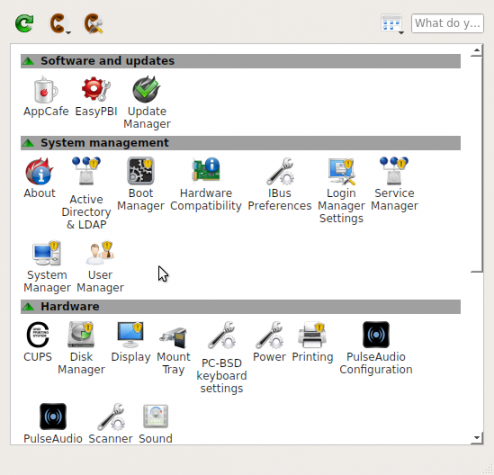 Figure 9: No titlebar buttons on the System Info module of PC-BSD Control Center

And the Firewall Manager. Yes, I can right-click on the titlebar and choose Close, but titlebar buttons were designed for a reason.

Figure 10: No titlebar buttons on the Firewall module of PC-BSD Control Center

Another problem I’m going to highlight is not in the minor category. It concerns installing certain applications on the system, whether those applications are installed from the command line or from AppCafe, the distribution’s graphical package manager. The applications I tried to install were LibreOffice, Apache OpenOffice and Calligra, all free software Office suites. 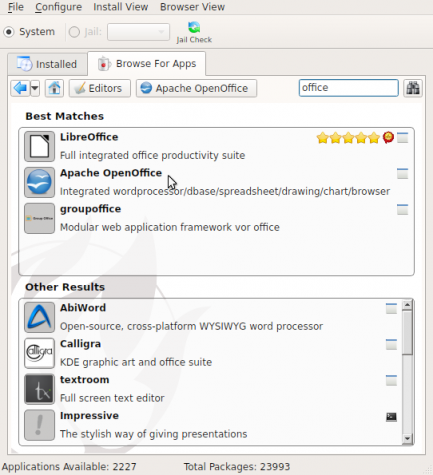 Figure 11: A search of Office applications in AppCafe

This screenshot shows part of the error that resulted from an attempt to install Apache OpenOffice.

Which was the same that resulted from an attempt to install LibreOffice.

And which also was the same that resulted from an attempt to install Calligra, the native Office application for the K Desktop Environment.

Yet another problem I encountered while test-driving PC-BSD 10.1.1 Cinnamon can only be experienced when the screen lock is activated, which happens after 10 minutes of inactivity (that’s the default). And the problem? The password does not unlock the screen. Yes, I checked. Caps lock is not the problem. The solution? Reboot the system and log in using the same password that could not unlock it after screen lock activation.

Last but not the least is the audio problem. No sound. All I get is an annoying hiss from the built-in speakers of my monitor. I tried messing with the audio settings, but gave up after about 10 minutes. Stuff like that should just work out of the box.

To cap, PC-BSD 10.1.1 Cinnamon is a major improvement over the 10.1 release, but there are still many issues that need to be fixed. The good news is most of the issues shouldn’t be that difficult to fix, so I’ll keep my fingers crossed and wait until PC-BSD 10.2 hits the download mirrors before I make that migration from my favorite Linux distribution to PC-BSD.

More information about PC-BSD 10.1.1 is available here. ISO installation images may be downloaded from here. Did you try other desktop environments of PC-BSD 10.1.1? Disappointed or encouraged? Share your experiences.