These startups want to disrupt the events space with NFT tickets 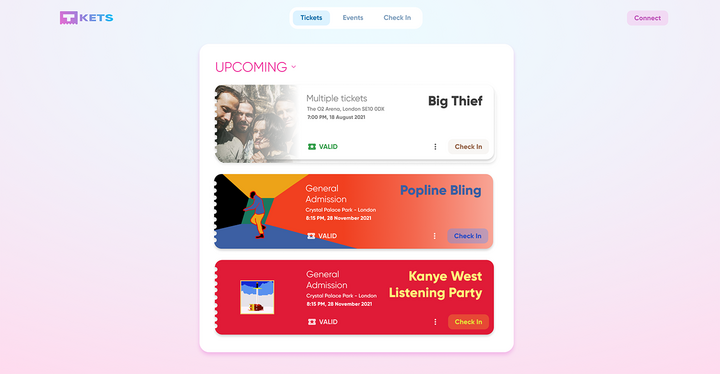 If you organize paid events of any size, one service you can’t do without is one that enables you to sell tickets. The most popular of such a service is Eventbrite, which I’ve used for all of my events, including for a blockchain event in 2018 and for Big Data & AI Conference in 2019. So an event ticketing service can be very lucrative.

Now a few startups are trying to disrupt that space with tickets issued on blockchains. Three of those startups are mentioned in this article, all with European roots. The main selling point of blockchain-based  ticketing platforms like those mentioned herein is that the tickets become tradable digital collectibles, or NFTs, unlocking additional benefits to both ticket buyers and event organizers. And with everybody trying to cash in on the NFT frenzy, it’s no surprise that these startups are attracting attention.

And it only makes sense that I start the with the leader of the pack.

GUTS Tickets is a Dutch outfit and the company that actually developed the blockchain-based technology that underpins the platform. That technology is called the Guaranteed Entrance Token Protocol, or GET Protocol. Though blockchain-based, you can’t pay for a ticket on the GUTS Tickets platform with a cryptocurrency. The company actually uses Stripe as a payment processor.

So between the flat fee GUTS Tickets charges (€1.00) and the fees tacked on by Stripe for facilitating payment and automating the collection of taxes on behalf of the event organizer, the service fees you pay atop the original ticket price can be just the same or slightly higher than what a traditional ticketing platform like Eventbrite charges.

There are a few resellers that use the GUTS Tickets platform, but the fact that they have to pay a fee to GUTS Tickets means that their fees has to be higher than what GUTS Tickets charges, which translates into a higher fee for you, the ticket buyer. Notable among these resellers is WICKET, which is based in Italy.

Mintbase is based in Portugal, and offers a bumper-to-bumper blockchain-based ticketing platform. That means you can pay for tickets on Mintbase using crypto. In fact, crypto is the only form of payment accepted on Mintbase. And because the blockchain protocol in use is NEAR, payment is only possible with Near, the NEAR protocol token.

For an event organizer, there are upfront fees for setting up an event on the the blockchain, and Mintbase also charges a 2.5% fee for each ticket sold. There seems to be no built-in system for collecting taxes, so as an event organizer, you have to figure out a way to account for that, knowing that you have to pay taxes for each ticket sold. The 2.5% fee is only slightly lower than what Stripe or Eventbrite charges.

Like GUTS Tickets, Mintbase is in use already, but usage seems to be limited at this time to music festivals and similar events in Europe.

TKETS has roots in the UK, and like Mintbase, it’s an end-to-end blockchain-based ticketing platform. The blockchain protocol in use is Theta, so payment is only possible in Theta Fuel (TFUEL), the Theta token. TKETS is still in beta, so it’s not yet ready for prime time. And as with Mintbase, TKETS does not have a built-in system for collecting taxes yet. However, the representative from TKETS I spoke with yesterday said that’s one feature they hope to implement before they come out of beta.

It’s likely that I use two of these platforms, likely GUTS Tickets and TKETS, in addition to a traditional ticketing platform as backup for an upcoming event sometime in July 2022, so I should have a first hand experience with them early next year. Know of any other blockchain-based ticketing platform in production or beta? Post in the comments section.