How to Dual-boot Manjaro 16.10, Windows 10 on a computer with UEFI firmware

At the end, GRUB, the Manjaro boot manager/boot loader, will be the default boot manager of the computer, which will give you the option of booting into Manjaro or Windows 10 whenever you (re)boot the computer.

1. For a pain-free and successful operation of the sort that, it is recommended that you disable Secure Boot. How this is done depends on your computer, but if you have the same Lenovo laptop I used for this tutorial, see How to disable Secure Boot on a Lenovo G50 laptop. On an HP 250 G5 laptop, see this guide.

After the download has completed, you may now use it to create a bootable USB stick. To accomplish that on Windows 10, use this article as a guide. On any Linux distribution, the simplest method is to use the following command:

In the next step, you’ll use that bootable USB stick to install your favorite desktop flavor of Manjaro alongside Windows 10.

If you need to encrypt the Manjaro 16.10 side of this setup, see Disk encryption with Calamares, the Linux installer for assistance in using the installer’s disk encryption feature.

If you follow the steps as given here, you should have yourself a dual-boot system running your favorite desktop flavor of Manjaro Linux and Windows 10 in about 12 minutes. So if you’ve not done so already, insert the bootable USB stick you created in the previous step in a free USB port and reboot the computer. If it’s been configured in the BIOS or UEFI setup utility, it should boot into the USB stick. If it does not, access the computer’s boot menu and select the appropriate entry. In Figure 2, that entry is EFI USB Device (USB Flash Disk), and it should be the same on your computer.

Let the computer boot into the Manjaro Live desktop. While on there, launch Calamares, the distribution’s graphical installation program. The step after the first step, should look just like the one shown in Figure 2, which gives you several disk partitioning options. 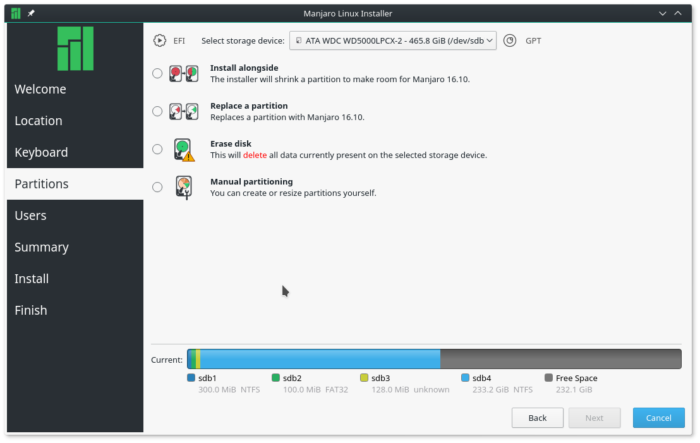 What we want to do here, is create three partitions, mounted at / (root), /home and swap. And the option that will make that possible is Manual partitioning. 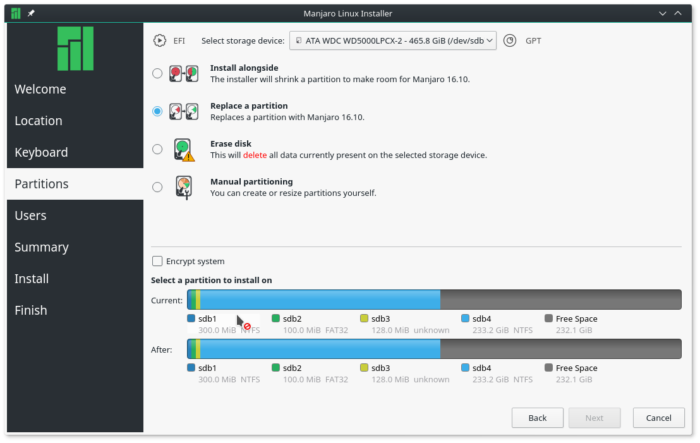 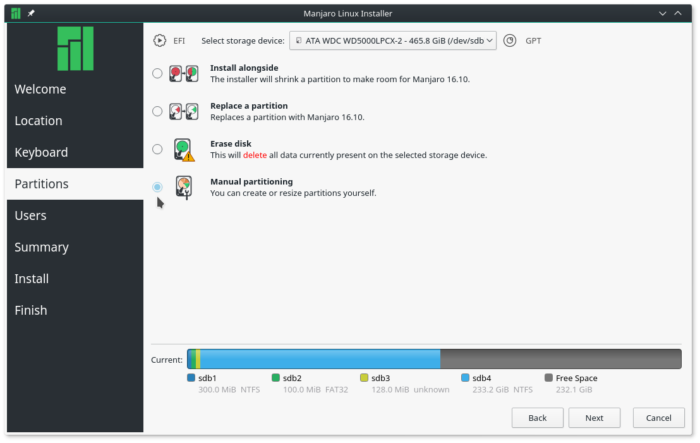 That will take you to the manual disk partitioning interface, where all existing partitions and the free space, will be listed. In Figure 5, partitions 1 to 4 are the Windows 10 partitions. Though it’s not indicated as such, partition 2 (/dev/sdb2), is the EFI System Partition (ESP). That’s where Windows 10’s boot loader is installed, and where GRUB, the (Manjaro) Linux boot loader, will also be installed. To start creating partitions, select the free space as shown in Figure 5, then click the Create button. That procedure has to be repeated for all the partitions you’ll be creating. 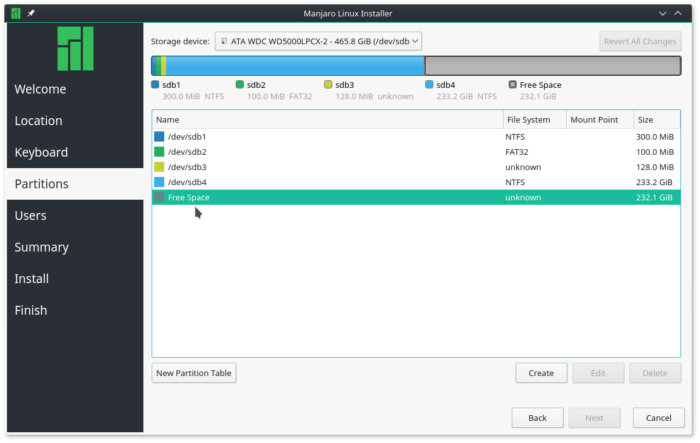 That should open the installer’s partition editing window, shown in Figure 6. The only options we’ll need to modify are Size, File System, and Mount Point. For the root and /home partitions, we’ll be using the default file system, so there will no need to modify that when creating those partitions. Note that the installer does have support for disk encryption, but for this setup, we’ll not be using that feature. 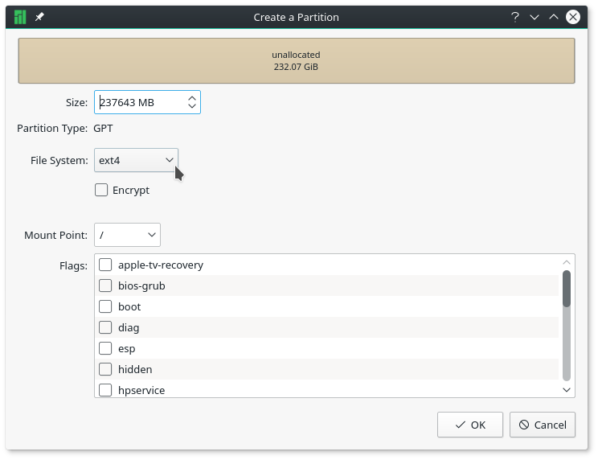 The first partition we’ll be creating will be mounted at /, and you can assign from 20,000 MB (20 GB) to 50.000 MB (50 GB) to it. A default installation of Manjaro 16.10 KDE takes up less than 7 GB of disk space, so if you don’t have that much free disk space to spare, less will do, provided it’s not less than 7 GB. For the File System option, leave it at ext4. Click OK when you’re finished setting the options. 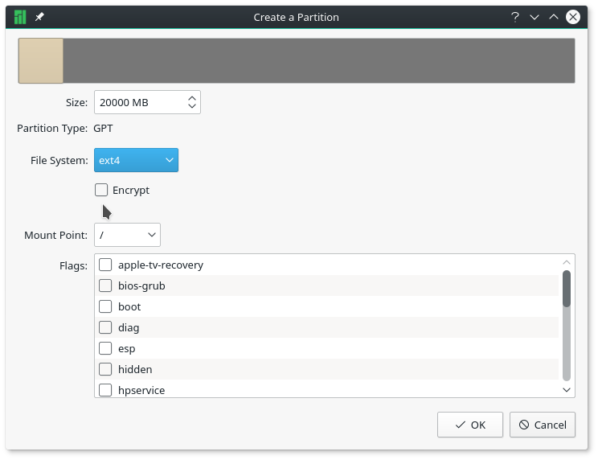 For the next partition, which will be mounted at /home, assign as much disk space as you can afford to spare, and leave the File System at the default. OK. 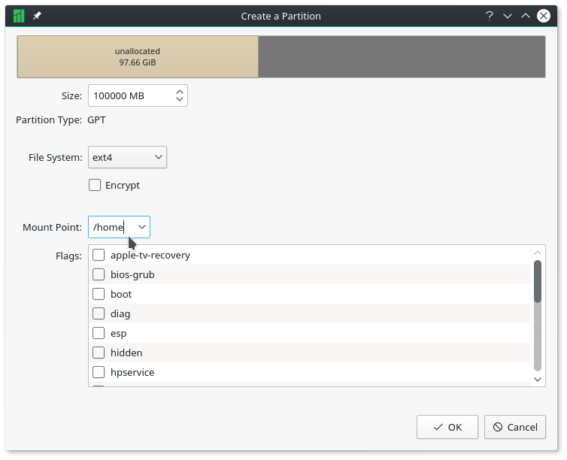 The last partition will be for swap, disk space that the system may use as (virtual) memory. From Use as, select linuxswap, then assign some disk space to it. About 2000 MB (2GB) to 4000 MB (4 GB) should do. Less if you don’t have that much disk space to spare. OK. 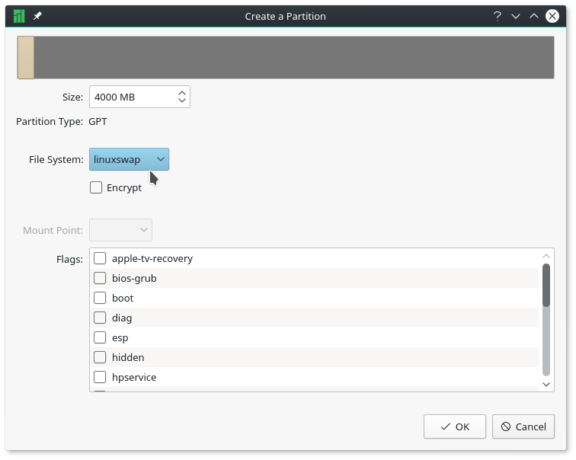 Back to the manual partitioning window for the last time, the partitions you just created will be listed under the existing (Windows 10) partitions. One last task that needs to be completed here before moving to the next step, is specify the ESP. That should be /dev/sdb2, so click on it. 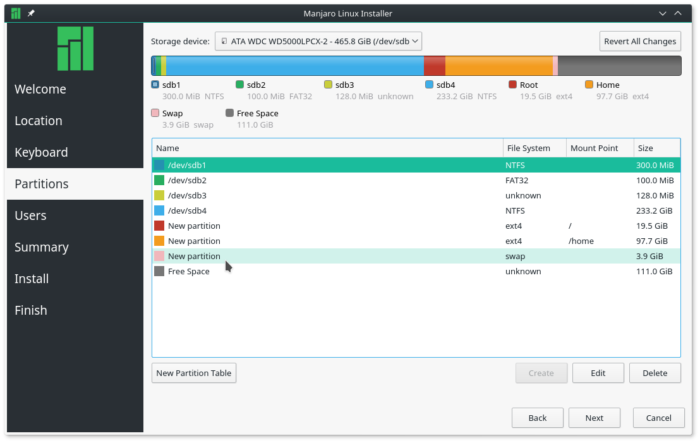 In the partition editor’s window that opens, set the Mount Point to /boot/efi, then click OK. Do not modify any other option in this window. 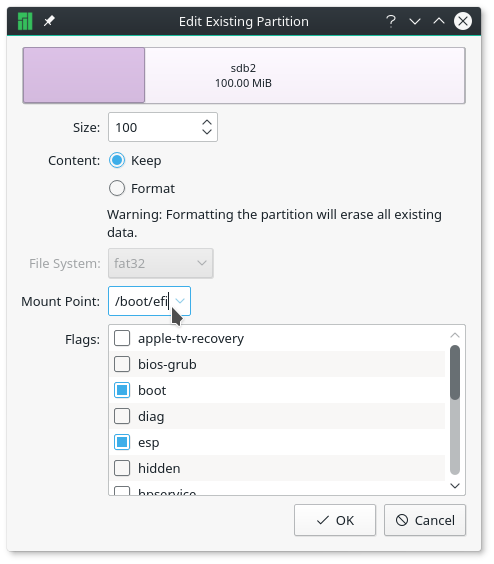 All should now be set, and you may click Next. 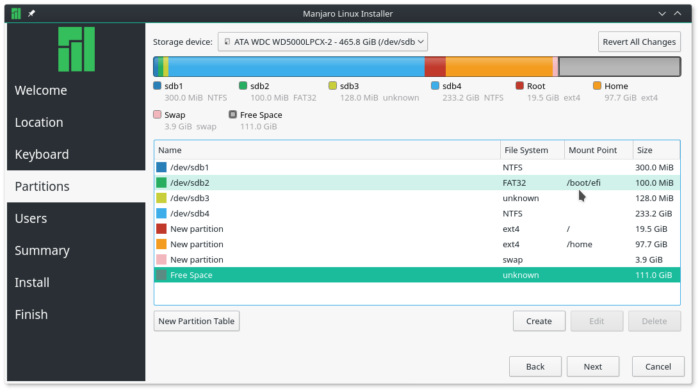 This shows you a summary of all the tasks the installer is going to perform. If you agree, click Next. 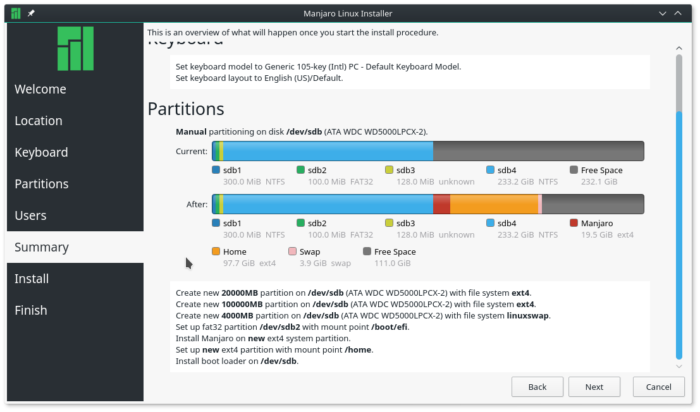 Figure 13: Summary of installation options for dual-booting Windows 10 and Manjaro 16.10

Boot Into Your New Dual-boot System And Update GRUB

After installation has completed, attempting to reboot into your new dual-boot system will first take you to the GRUB menu, which will be just like the one in Figure 14. Notice that there’s no entry for the Windows 10 boot manager, so it won’t be possible to boot into Windows 10 from here.

Figure 14: GRUB menu of Manjaro after installing Manjaro alongside Windows 10

We’ll correct that in a moment. Right now, boot into your new installation of Manjaro. Once logged in, open the terminal application, then type sudo update-grub. The output should match that shown below.

After that, rebooting the computer will show a GRUB boot manager interface with an entry for Windows 10, besides the entries for Manjaro Linux. And GRUB will still remain the default boot manager. After making sure that you can still boot into Manjaro, boot into Windows 10 also. If you did all as specified in this article, you should be able to boot into both systems. Enjoy your dual-boot system running Manjaro 16.10 and Windows 10. 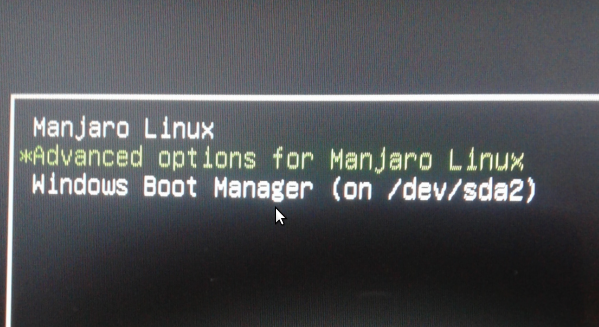 Figure 15: GRUB menu of Manjaro after updating GRUB on a dual-boot system between Manjaro and Windows 10

I see, but according to this guide it can lead to problems since Windows thinks the ESP is theirs: https://forum.manjaro.org/t/wiki-windows-10-manjaro-dual-boot-step-by-step/52668

I’ve never had such a problem, but then, I don’t use Windows at all. That said, nobody using my guides to set up a Windows-Linux dual-boot system has come back complaining about Windows deleting the Linux boot files in the ESP.

Ok, thanks. According to other sources this was a problem before grub 2.00 https://unix.stackexchange.com/questions/49165/can-grub2-share-the-efi-system-partition-with-windows

That guy has the wrong setup, because if you’re dual-booting using 2 hard drives, it doesn’t make sense to set up the operating systems to share an EFI boot partition. Each drive/OS should have its own EFI partition..

I’m updating Windows 10 right now and will post by tomorrow if I have any issues booting the Linux Mint on the same laptop.

So on my dual-boot system running Windows 10 and Linux Mint 18.2, I just upgrade Windows 10 to the very latest, Linux Mint to 18.3, and no issues so far. Both systems booted just fine. From Mint, the output of ls /boot/efi/EFI shows:

As you can guess, an edition of Fedora used to reside on the same hard drive.

You also should disable fast startup and hybrid sleep in Windows.