Make GRUB the default Boot Manager on an HP 250 G5

The HP 250 G5 is a laptop with Intel core i3 processor inside. I bought a couple as gift items about a week ago, then proceeded to install Linux Mint 18 Cinnamon alongside Windows 10 on each. Those HP models are not top of the line, but with 8 GB of RAM and 1 TB hard drive, it’s actually not bad.

In this article, you’ll learn how to make the GRUB boot manager the default on a dual-boot system, assuming you installed your favorite Linux distribution alongside Windows 10 on the computer, like I did in this article.

In the past, when you set up a dual-boot system using a Linux distribution and Windows 10 on a computer with UEFI firmware, it will tend to boot into Windows 10, regardless of what you set the default boot manager to in the UEFI setup utility. That seems to have changed in recent Linux distributions – whatever you set the default boot manager to is what it will remain, bootup after bootup.

To set or modify the default boot manager, you first need to access the UEFI (BIOS) setup utility. On an HP 250 G5 laptop, that’s easier if you first bring up the boot menu by pressing the ESC key (several times) as the unit boots up. The entries on that menu and the F-keys to press to access each, are: 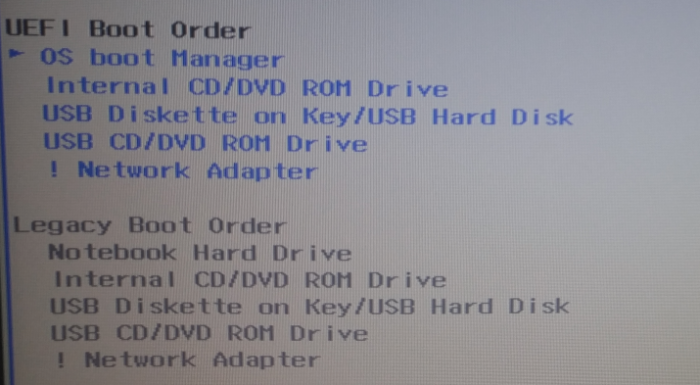 Pressing ENTER/Return when OS boot Manager is selected will reveal the installed boot managers, like the GRUB and Windows 10 boot managers shown in Figure 2. Use the F5/F6 key to make GRUB the default, if it’s not already the default. Follow that by pressing the F10 key, then Yes to the prompt to save and exit. Now whenever the computers boots, the GRUB boot manager will be the one you see. From it’s menu, you can then choose to boot into the Linux distribution or Windows 10.

What about Acer Nitro 5?

I have HP Elitebook 840 G1. Installed Windows 10 and Fedora 28, but Grub menu not showing.
As per your instruction, when I click OS Boot manager under UEFI Boot option, nothing opens, double arrow is placed in from of OS Boot Manger.

In an another tutorial somewhere on internet, I typed the sudo efibootmgr to check which OS either Windows or Fedora is booting first, but what I found, there is not even mentioned both OSes. Below is output of sudo efitbootmgr

Please help what to do.