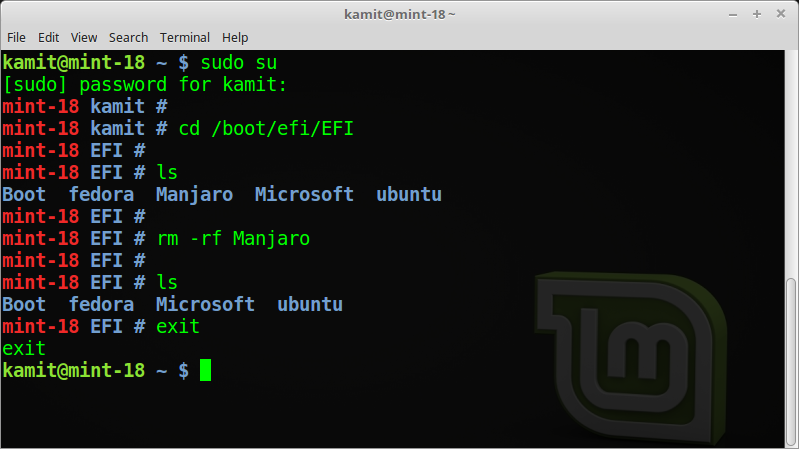 This tutorial shows how to delete bootloader folders of Linux distributions that you have deleted from a dual-boot system.

The dual-boot setup still works beautifully, but traces of the old Linux distribution still exists on a partition of the hard drive reserved for bootloader folders on a UEFI system. That partition is what Windows called EFI System partition.

You could delete them while logged into Windows 10 in the same fashion used at How to delete GRUB files from a Boot EFI partition in Windows 10, it’s a lot easier to accomplish the task while you’re logged into the current Linux side.

It simply involves logging into the Linux side, navigating to the /boot/efi/EFI directory, list its contents and deleting the unwanted folder(s), using the commands shown in the following code block. Just be absolutely sure that you do not delete the Microsoft folder. The same goes for the folder of the existing Linux distribution.:

If it would make more sense, the following is a screenshot of the steps I used. 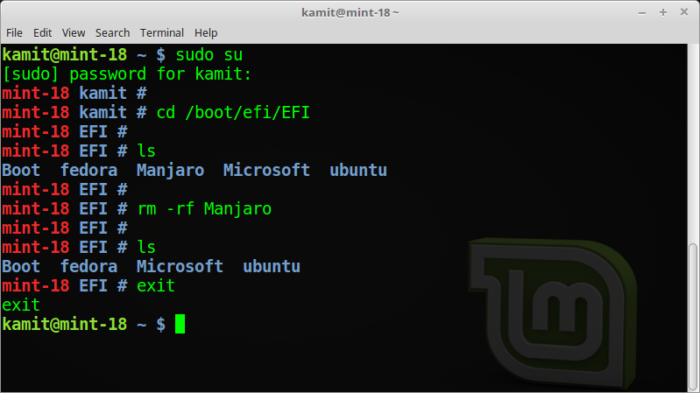 If you’ve used How to delete GRUB files from a Boot EFI partition in Windows 10 to perform the same operation from the Windows side of such a setup, it should be obvious that it’s much easier from the Linux side.

If you have Windows installed and did a dual boot with Linux, use diskpart to clean the efi folder.
Right click on the Windows logo (lower left corner) and open the Power shell (admin).
diskpart
list disk
sel disk 0 (zero) #If you have more than one hard drive the number may be different.
list vol
sel vol 3 # look for the system fat32 and choose the correct volume number
assign letter=s
exit
cd s:\efi
dir
rmdir manjaro #if more than one entry you have to do one at a time. Do not use the tab function, won’t work.
Now lets go back and remove the letter s.
cd c:\windows\system32
diskpart
sel disk 0
sel vol 3 #or what ever number you used
remove letter=s
exit
exit