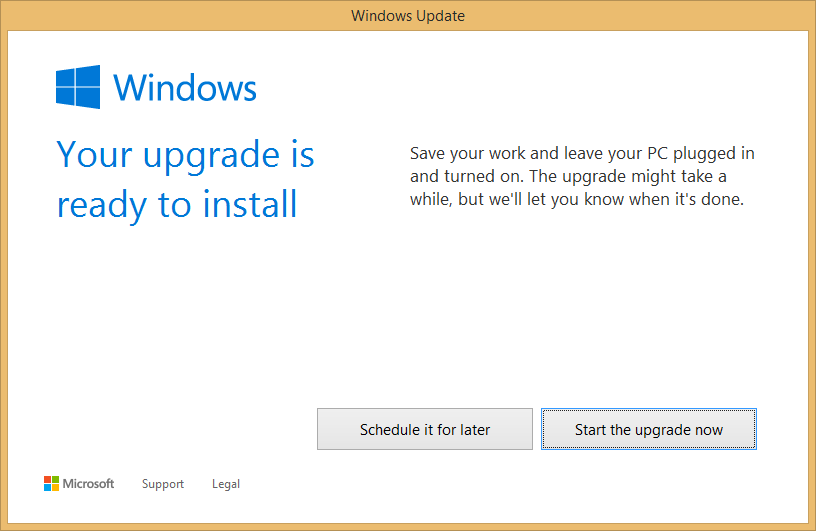 For the very first time in my digital life, I bought a Windows computer and didn’t wipe it and install my favorite Linux distribution it its place.

No, it’s not that I’ve suddenly fallen in love with Windows, just that I needed an OEM Windows computer for writing tutorials on how to set up dual-boot systems between it and Linux distributions.

Because it shipped with Windows 8.1 and Windows 10 was going to be released less than four days after I bought it, I knew I was going to upgrade as soon as possible. But making the upgrade available for all at the same time was never in Microsoft’s plan.

The upgrade is going to be phased out over a period of weeks, perhaps months. And you have to get in line by reserving your spot. Microsoft will then send you a notification when a spot is available for you.

But who has time to wait…

Luckily, there’s a method of forcing issues floating around the Internet that involves activating Windows to check for updates right after typing a simple command. So I decided to give it a shot and hoped for the best. For a while, it seemed to work – the almost 3 GB Windows 10 upgrade file was downloaded, but starting the upgrade itself failed with the error shown in Figure 1. 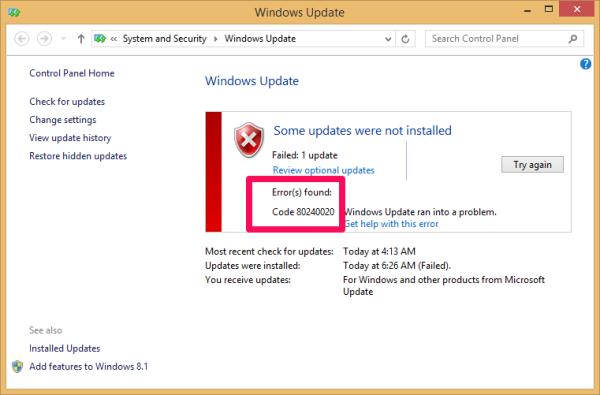 What went wrong? I didn’t know it then, but the problem was that I did not reserve a spot first. After I did that, I tried to force issues again by repeating the steps that produced the error in Figure 1. It worked. Figure 2, shown below, shows the main view of the Get Windows 10 app after I reserved a spot. 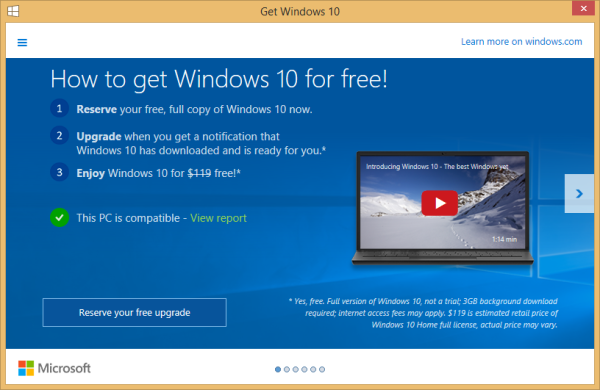 And I was expected to wait for maybe days or weeks to be notified when Microsoft has a spot for me and my computer. 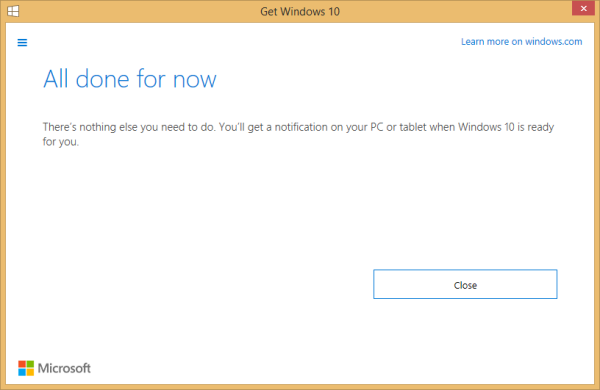 Figure 3: When will Microsoft notify me that my copy of Windows 10 is ready?

But again, why wait when you can force issues? “Forcing issues” involves typing wuauclt.exe /updatenow on the Windows command line and activating Windows to check for updates. If those two steps are completed in that order, you should get a windows just like the one in Figure 4. 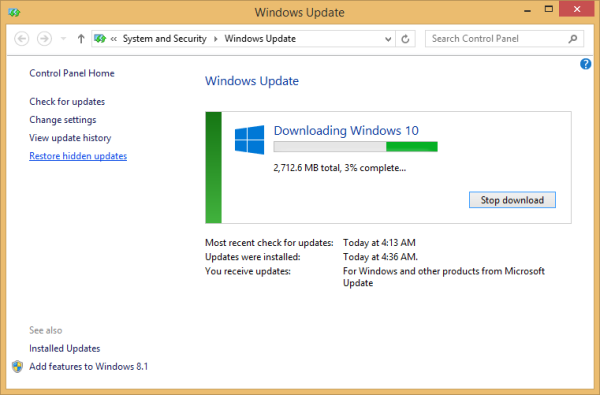 After the download has completed, the system will be prepared for the task ahead. 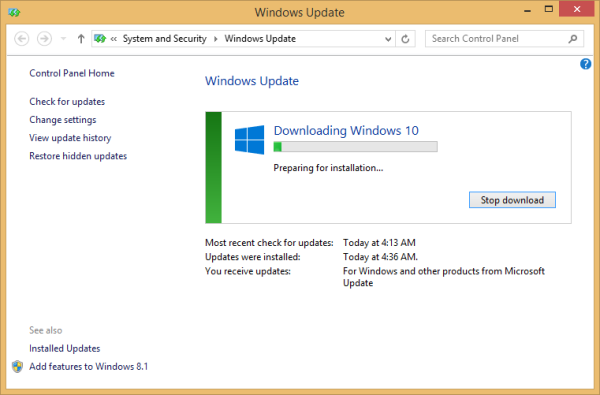 After which you’ll be required to either accept or reject the license agreement. Tough choice, right? 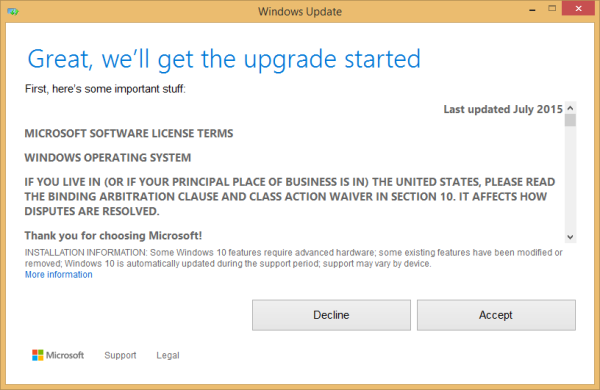 Assuming you accepted the license, you may begin the upgrade right away, or schedule it for a later time. No point waiting, so I clicked Start the upgrade now. 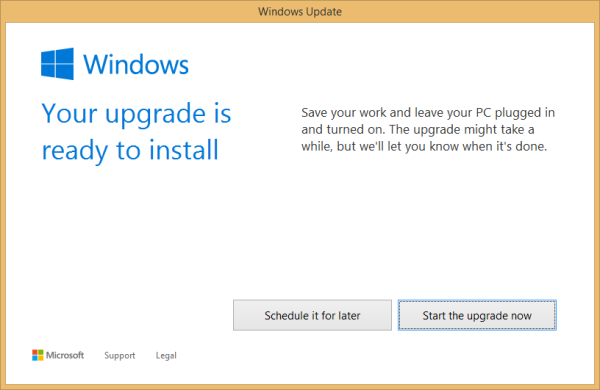 After the upgrade, here’s what the Windows 10 desktop looks like. I’m not a Windows fan and have no intention of using the system for a purpose other than for setting up test dual-boot systems, but compared to Windows 8, Windows 10 is nice. That’s just for the user interface, though. The built-in and enabled-by-default spyware features are another matter. The interesting thing is parts of it looks like clones of the Cinnamon desktop and a few other desktop environments that’s been around in Linuxland for years, like virtual desktops, or workspaces, for example. Yes, Windows 10 has virtual desktops, though only one is enabled out of the box. 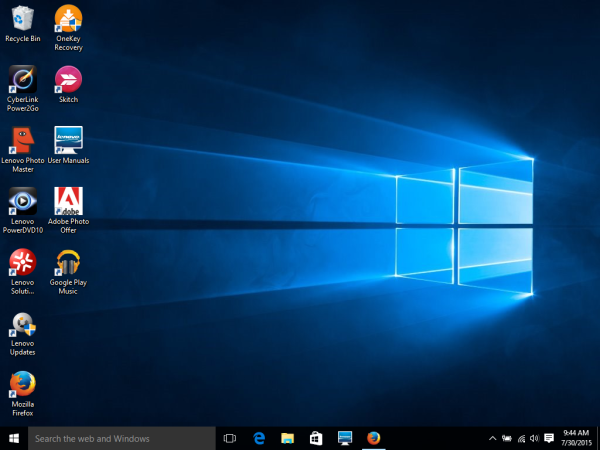 A day after the article was published, I received an email from Microsoft. In part, it said:

When will my free upgrade arrive?

You’ve already reserved, so your free upgrade is on the way. This is the largest software upgrade event ever and we’re managing it so everyone has a great experience.

Your notification to upgrade could come as soon as a few days or in a few weeks.

In the meantime, you can always check your upgrade status in the Get Windows 10 app. Find the app by clicking on the Windows icon on your task bar.

Too late, Redmond folks. I completed my upgrade 24 hours ago.