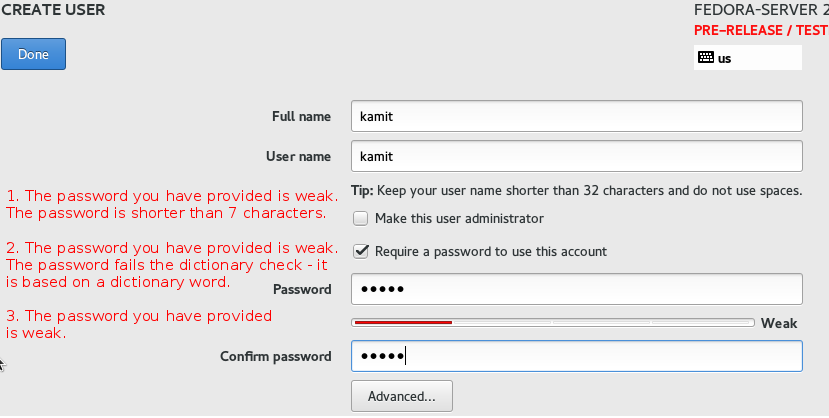 So the third alpha release of what will become Fedora 22 has been released and I’ve managed to download ISO installation images of the main edition, which uses the GNOME 3 desktop, KDE and the Netinstall.

So far, I have nothing out of the ordinary to report with respect to the desktops themselves, but I do have a comment about Anaconda, the Fedora system installer.

No, it’s not about all the UX design snafus that Anaconda is known for, but something different. And that something different is password strength enforcement. If you have installed one of the latest alpha releases, I’m sure you know what I’m talking about. If not, here’s what happens when you’re creating a user account and specifying a password for the root account.

And that’s the problem: The definition of weak is too strict. So strict that even a password I use for online banking failed the test. And that’s an alphanumeric password with upper and lowercase letters. I can understand a very strict password enforcement for an online account, but for a desktop, yes, let’s be strict, but leave room for when you don’t really need to be paranoid.

Anybody from Fedora listening?

The image below shows the user setup step during the installation and some of the password strength test fail messages. 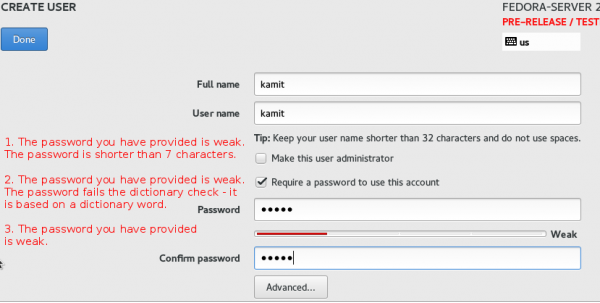