Use GRUB-Customizer to give GRUB a prettier face on Linux Mint 17.1 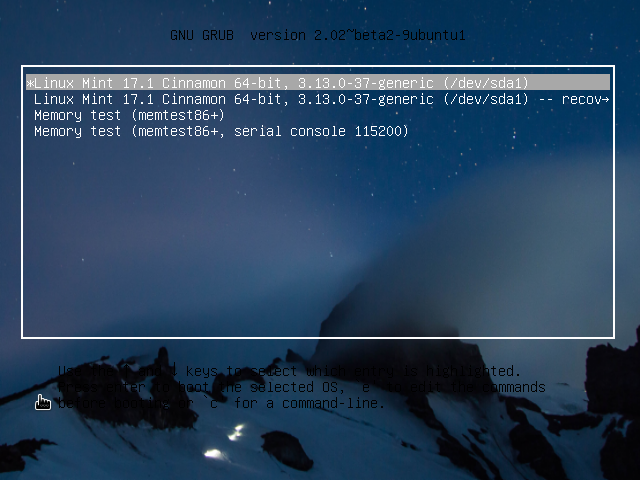 I’ve been playing with the Cinnamon edition of Linux Mint 17.1 since it was released, and I’ve just gotta say that it’s the best desktop distribution released this year.

Cinnamon is slowly but surely carving out a place at the top of the list of free software desktop environments.

As good as Linux Mint 17.1 Cinnamon looks, however, it still ships with a GRUB boot screen that doesn’t match the desktop.

In this short tutorial, you’ll read how to replace the default GRUB background with a more colorful one by using an application called GRUB-Customiser. The defautl GRUB boot menu is shown in Figure 1.

This figure shows what it could look like. This doesn’t show the most accessible GRUB menu background, but it does show that you can make it look any way you like. With the right image, you can even give it an Xmas theme.

The application that will make the process point-and-click easy is called GRUB Customizer. It is not installed by default on Linux Mint 17.1, so in the rest of this tutorial, you’ll read how to install it from a Personal Package Archives (PPA) and use it to customize the GRUB boot screen’s background.

Related Post:  How to enable the btrfs Anaconda option on Fedora 13

You can install the PPA from the command line or from the Software Sources module of Linux Mint Cinnamon’s System Settings. The PPA is by Daniel Richter. If you choose the command line route, install it by typing the commands given in this code block.

If you prefer a point-and-click interface, open System Settings and click on the Software Sources module in the Administration section. When it opens, click on the PPA tab and then click on the Add a new PPA button.

This just shows the system informing you what it’s about to do. Click OK.

After installation has completed, you should see the PPA and its source listed on the main panel of the PPA tab. Click Update the cache button to update the package database. This is the equivalent of typing sudo apt-get update. Close Software Sources manager.

You may now install the application by typing sudo apt-get install grub-customizer. After it’s installed, launch it from the menu.

The selected image should appear in the preview panel. If it looks good and you can read the GRUB menu entries, click the Save button. After that, reboot and see how your choice of background looks. Hope it’s better than the one shown in Figure 2 of this tutorial.