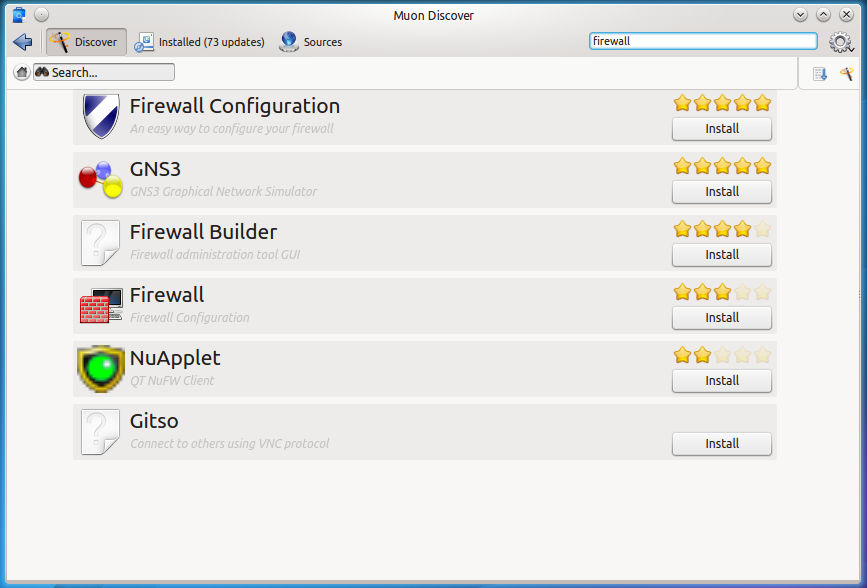 For a Linux distribution that I track, that’s a long time without a review. But I remember losing interest in this distribution because I didn’t think the developers were bringing anything new to the table. Not that I could see anyway. I wasn’t especially thrilled with the design idea that influenced Muon, the graphical package manager.

But maybe the developers have had some bright ideas that they have implemented since I last played with the distribution. So I guess now’s the right time to do a quick review of the latest release, which is Kubuntu 14.10, to see if anything has changed – for better or worse.

If you’re reading this and you have no idea what Kubuntu is, it’s a Linux desktop distribution that’s based on Ubuntu Desktop. And KDE is the preferred desktop environment. Think of it as Ubuntu but with KDE and a different graphical package manager.

Like virtually all Linux distributions, Kubuntu is made available via installation images suitable for burning on a DVD or transferring to a USB stick. Don’t worry, the images tend to be just about 200 MB north of 1 GB, so they should fit on any blank DVD or USB stick that you can buy today. And because they are Live DVD/USB images, available for both 32- and 64-bit architectures, you can test-drive them before installation on your computer.

Features of Kubuntu’s graphical installation program are on par with those of its parent distribution. That means it has support for disk and home directory encryption, and LVM, the Linux Logical Volume Manager.

I’ve never attempted to set up a RAID system on any Ubuntu-based distribution, so I’m not quire sure if RAID is supported. However, it does have support for formatting partitions with the btrfs file system, a new copy on write (CoW) file system that has built-in support for multiple device and subvolumes. Even with a file system with features like those, users should still be able to configure them via the installer, so Kubuntu’s graphical installer still needs a lot of work before it can be on par, feature-wise, with that of PC-BSD, a FreeBSD distribution that uses ZFS as the default file system. ZFS has the same features of Btrfs plus a whole lot more. Unfortunately, it is distributed under a license that’s not compatible with the Linux kernel’s license.

The installer is UEFI-aware, though I haven’t tried to install it on any computer with UEFI firmware. I do plan on doing that soon, so stay tuned on that subject. If you have a recent Dell Inspiron desktop with Windows 8 pre-installed and you have succeeded in installing Kubuntu 14.10 alongside it, please leave a comment and tell me what specific model of Dell Inspiron you have. A recent visitor couldn’t do it with Linux Mint. (See this forum post.)

I know the distribution is based on Ubuntu, but I didn’t expected the GRUB menu to still be displaying entries for Ubuntu.

The distribution’s KDE desktop is powered by KDE 4.14.1. There’s a separate release of Kubuntu featuring a preview edition of KDE Plasma 5, the version of KDE that will replace the 4.x series. I’ve played with Plasma 5 on another distribution and it looks great. It’s definitely a huge improvement over Plasma 4. Unfortunately, it won’t be ready for prime time until sometime next year. For now, Kubuntu users will still have to make do with KDE 4.14.1 or whatever version update of the KDE 4 series becomes available. Figure 4 shows the default Kubuntu 14.10 desktop. That wallpaper is the default and the only one installed on the system.

I wasn’t particularly thrilled with the default desktop, so I downloaded several from the Internet. At least for the few hours that I had to play with the distribution, I get to use a wallpaper with some visual appeal. Not that it has any impact on the functionality of the system, but I like cool graphics. I do expect a modern operating system to have more than one wallpaper installed by default.

Figure 6 shows the desktop with the Kickoff menu, which is the default. For a full screen menu, Homerun is an option, though the homerun package is not installed. The full name of the package is plasma-widget-homerun. That’s what needs to be installed before the Homerun widget becomes available.

Another screenshot of the desktop with the menu showing installed Office applications.

One of the first things I do with any distribution I’m reviewing is to find out if a firewall is installed and whether the firewall comes with a graphical interface. Yes, I subscribe to the idea that every modern operating system should have a firewall enabled by default. A firewall will not solve all your security worries, but it is a basic security tool that should be made available to users out of the box. And to ease configuration, a graphical interface is a good thing to have.

Kubuntu 14.10 comes with a firewall application, but, unfortunately, it is inactive by default. And as the search result in Figure 8 shows, a graphical interface for managing a firewall is not installed. That’s the first service I’d activate if I were going to use it on my main computer. Actually for Kubuntu, the default firewall application – ufw, is not even the best available. FirewallD, a firewall application from the Fedora project, is much better and is in the default repository. All you need to do is install it and uninstall ufw. See Replace Ufw firewall with FirewallD on Linux Mint 17 Cinnamon for help on how to get it done safely.

Out of the box, Kubuntu 14.10 comes with a complete suite of applications that most users will need. That includes, Firefox and LibreOffice. And for a graphical interface for managing those applications, the distribution uses Muon Discover. Figure 9 shows the application’s main interface.

Installing and removing applications on the system using Muon Discover is pretty slick.

That aside, Muon Discover does provide a simple interface for managing repositories, including PPA’s (Personal Package Archives).

And for those times when updated packages are available, the updates manager does as good a job as any other in notifying you about the updates and installing them.

KDE has improved in may respects since my last review of Kubuntu, so it’s fair to say that Kubuntu itself has improved. Muon Discover has improved too, so kudos to the developer. However, Kubuntu is not the best KDE-using distribution around. ROSA Desktop, for example, offers many more features than most KDE-using desktops. That said, Kubuntu 14.10 should be good enough for most users. If you would like to take it for a spin on your computer, installation images are available for download from here.