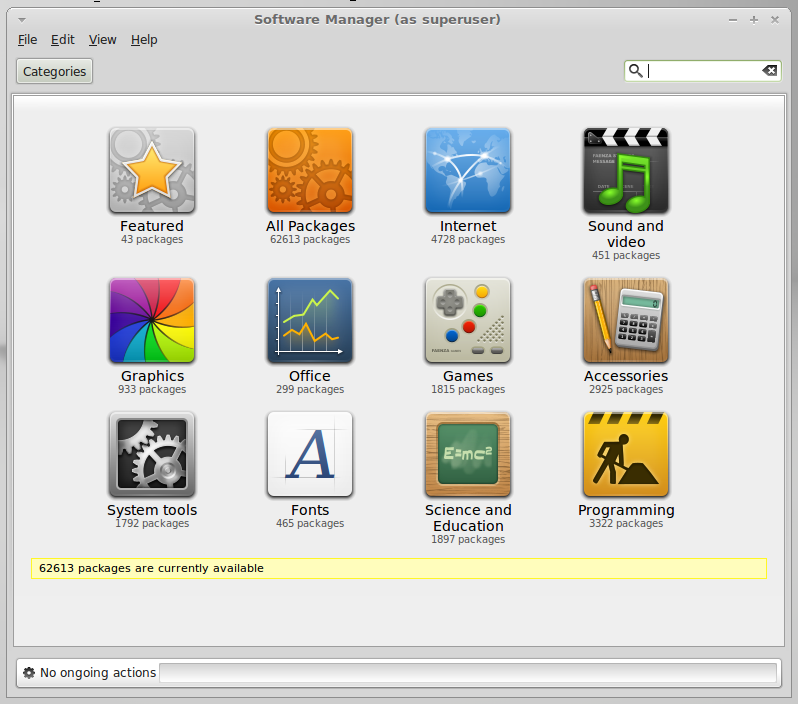 Linux Mint Debian Cinnamon: Given that the Cinnamon Desktop Environment is developed by the same team responsible for this distribution, you can be sure that the Cinnamon desktop offers the latest version of the desktop environment. This screenshot shows the default desktop. I’ve written enough about that default wallpaper in past reviews, so I’m not even going to touch it this time. 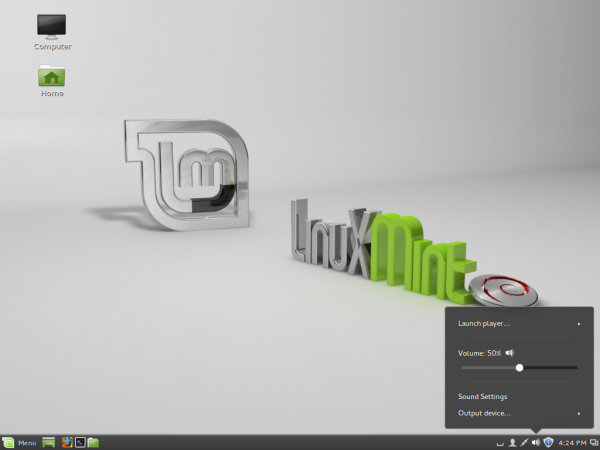 Another screenshot of the desktop showing the panel calendar. 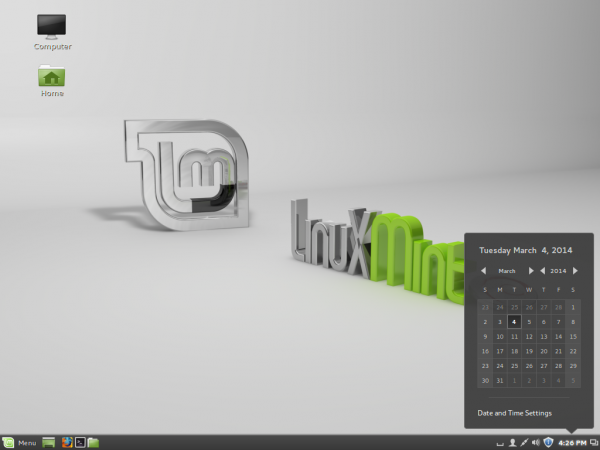 And this one shows the menu. 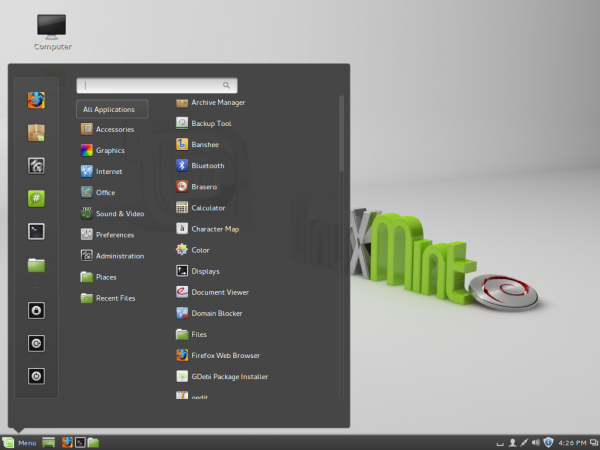 Using the menu’s search feature. It might not be obvious in this screenshot, but I was searching for “firewall”. Unfortunately, there’s no graphical firewall manager installed. 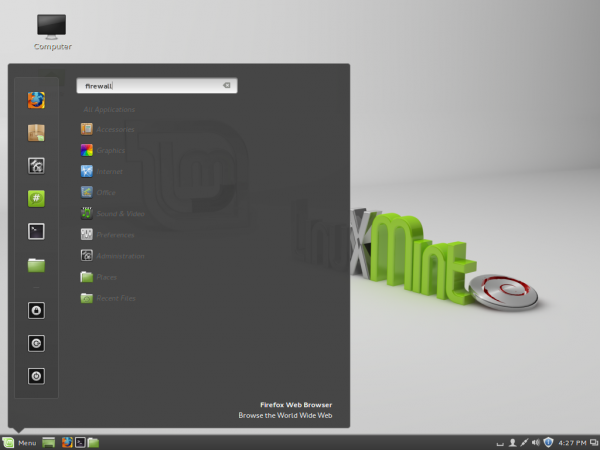 but not just that, ufw, the firewall applications, is installed but not enabled. 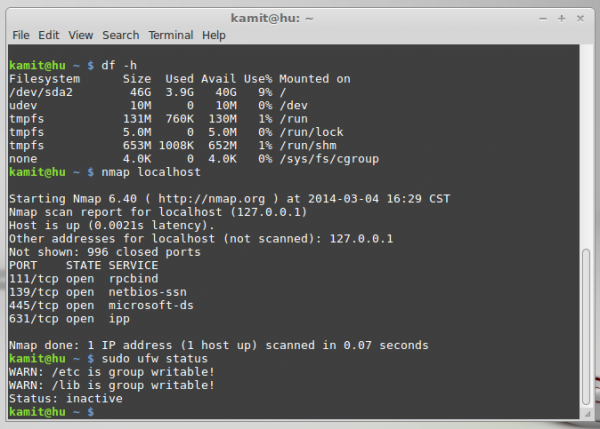 Linux Mint Debian MATE; The MATE edition offers version 1.6 of the desktop environment, which until yesterday, was the latest version. (MATE 1.8 was released yesterday.) 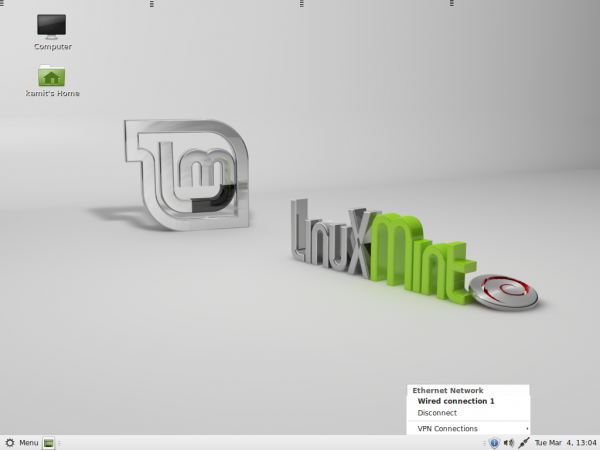 A screenshot of the desktop showing the panel calendar. 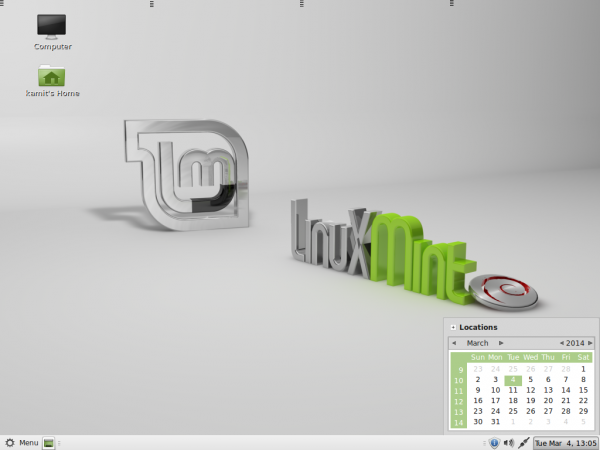 Another screenshot of the desktop showing the menu. 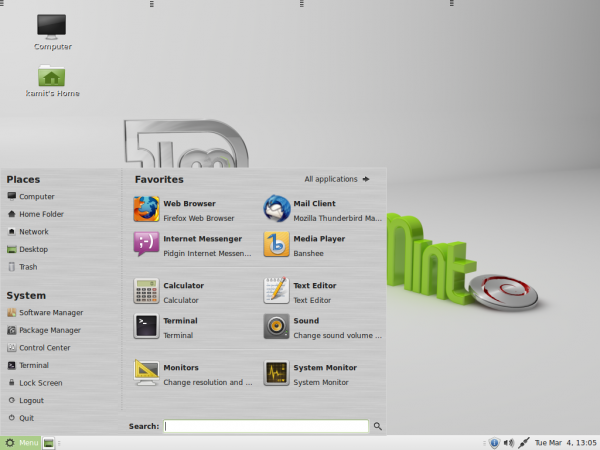 Just like with the Cinnamon menu, I was searching for a graphical firewall manager when I took this screenshot. There was none installed. 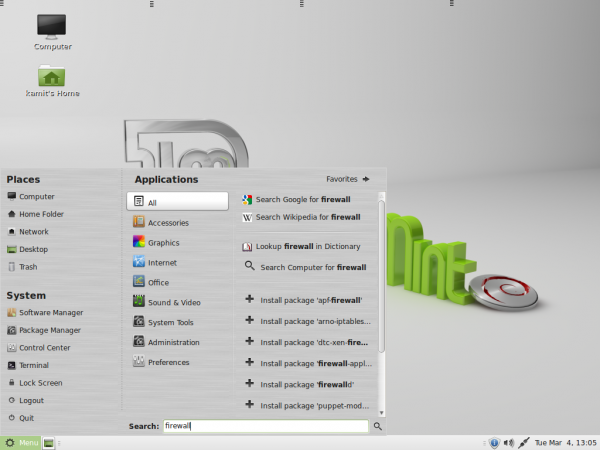 And also just like on the Cinnamon desktop, ufw, the firewall applications, is installed but not enabled. 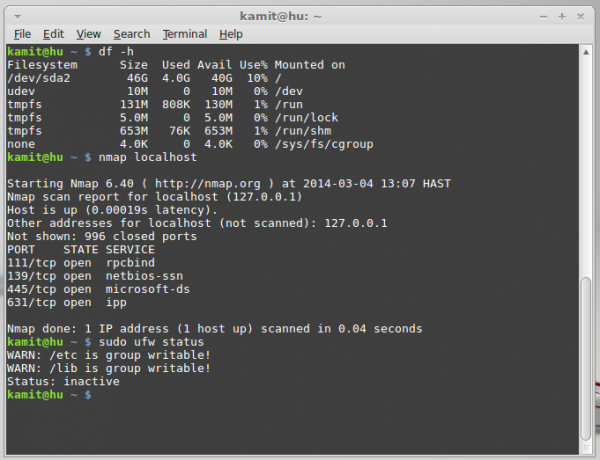 This is definitely not a distribution I’ll recommend to a new user. If that describes you and you are looking for a desktop Linux distribution that just works and has a good graphical installation program, try any edition of Linux Mint.

Resources: For the release announcement and download links, visit this link.

This is very misleading review.
If it was called
“Linux Mint Debian Edition (LMDE) INSTALATION 201403 review”
OK
But still it is not incorrect.
It does find other Operation systems and install along side with a boot menu which lets you choose which system you wish to use.
Of course you must have some basic knowlage of disk paritions and I agree the installer could explain more clearly about assining “/” , “home” and “swap”.
But most new users have a single disk and singe partition and just as installing windows hit “ yes” to each stage and it all gets done for you.

I switched to LMDE some 4 years ago and have found it to be by far the best distro for anyone knows nothing.
Boot from stick or DVD and all you need to do is type in wifi code ( if not on LAN ) and you can use everything out of the box.

Install may require a little bit of help but so do many people installing windows.
99% of the time you don’t need to install any drivers and to work with the software manager is now as easy as google play for andriod with one exception every thing is free with no in app purchasises!

Anyone I know that has XP, I tell them to just install LMDE with cinamon desktop.
Only hear positive feedback and as far as updates go, I only have to say “ yep you can do it” that or 10 mins on teamveiwer and there good to go……..

As for the firewall …..I never use one if im behind a router with one built in anyway !
But I do have to agree that a GUI for a firewall that is added in the install would be a good thing ( OFF by default ).

Games …..hummm there are so many to choose from I don’t see which if any should be there by default …and just a few clicks in the software mangager and you can install one in seconds and play with out a restart. And as far as which apps are already there, well most home users don’t need more then whats there!

All in all you raise a couple of good points but missed the target completely…….
LMDE is fast, plays almost all media content, never needs to be reinstalled or cleaned up and all this out of the box for free!

The Dude who wrote this “article” is a complete dumbass. He has no idea about LMDE and its Pro’s. What a N00b!

That “dude” is me. What was it about the article that you disagreed with?

I agree with author. Installer is a joke. And he gets the typical linux reply…

“oh don’t be a pussy, all you have to do is google for an hour, take a guess at which one is the right solution, then crawl under the car and attach a hose from the axle to the exhaust, replace the screw in the transverse (if you have the 2010 model with A series) and then something else I forgot, just google it. Oh your engine doesn’t have the special lifters? then you need to pull out your power steering and change the o-rings first or it won’t start, unless you are a n00b.”

All that to support the author for not trying a right-click?

It’s not as if the inexperienced users would manage to install LMDE (or another OS) without messing anything up considering you have to know what partitioning is, but if you know that stuff, chances are it will cross your mind to perform a right-click where it’s needed.

The installer can clearly be improved but to complain about some as simple as that… it unnecessarily dumbs down a review.

LMDE 201403 is awsome. It just rocks and I’m an LMDE user for the past more than 3 years and I love LMDE. Minor issues may be there but then also it has improved a lot over years and getting better day by day.

«… And the more I think about Linux Mint Debian Edition … the less I see a need for its existence …»
lmde is the only desktop operating system i know that really works as rolling release. Ubu upgrade to the next release only works when you don’t change anything in the meantime, so not usable. Didn’t try the standard Mint releases, but I doubt, as it is based on ubuntu. lmde rolling works here in the family now for 2 years without any upgrade problems.

So, can you offer an other rolling release desktop operating system working without any problems for more than two years?

LMDE is not a true rolling-release distribution. From the project’s website, “Linux Mint Debian Edition (LMDE) is a semi-rolling distribution based on Debian Testing.”

Looking for a true rolling-release distribution? Try any desktop distribution based on Arch Linux. Antergos and Manjaro are good examples, though each has its pros and cons.

I could also throw in Chakra in there, but it has more cons than pros.

LMDE gives you twice a year ~1.2GiB of upgrade that really works without any problem over years. Security relevant stuff will be delivered when available.

ANY archbased distro I tried up to now breaks at lest twice a year, delivering a brick.

Hmm, I’ll have to agree for the most part with finid on this one. If you want a truly rolling Debian distribution there’s nothing better than rolling with Unstable/Sid. LMDE is only half-way house and quite pointless in my view, but I understand that there are people who are more comfortable with a more managed process. If addressing that group one would think a friendlier installer would be a high priority.

Why do Debian-based distributions insist on writing their own installers when the original has what they are lacking and is so easy and straight forward. Then again, I was happy with Debian’s old non-gui installer too. Together with the Anaconda installer and Slackware’s

So far, only Kali Linux is the only one I’ve come across that uses the DI.

I think Crunchbang Waldorf is using it, only rebranded with their own banner.

LMDE is an approachable Debian distribution with the polish of Mint and without many of the less desirable choices made by Ubuntu. Agree it is not ideal for new users.

Too bad you had a rought time with the partitions, but all you had to do is right-click a partition to assign it to / or /home. I’m not finished yet with reading, so I’ll get back to it. 🙂

In the words of a Persian sage, “always read an article from beginning to end before posting a comment.”

In the words on ancient romans sage,”Debian is not Ubuntu”