OPPO N1, CyanogenMod’s smartphone, is the first original device specifically designed for the Android-based mobile OS. And it comes less than two weeks after the announcement of the formation of Cyanogen, Inc. as a commercial entity responsible for CyanogenMod.

Note: While this is being advertised as a CyanogenMod smartphone, the official specs lists the operating system as OPPO’s Color ROM, which is also based on Google’s Android.

There’s a juicy story surrounding CyanogenMod and Cyanogen Inc, which you might want to read here.

Regarding the OPPO N1, it is from OPPO, a Chinese mobile device manufacturer. The N1 is the company’s third smartphone and it comes with a few unique features.

One of those is a 13 MP camera, that made its debut on the OPPO Find 5. On the N1, that 13 MP camera sits inside a swivel that itself sits atop the smartphone, giving it a rotating camera. So there’s no front- or rear-facing camera. Just a single 13 MP camera.

Just below that rotating camera is a 5.9-inch Full HD display, which puts the N1 in the phablet category. At the rear is the O-Touch control, which lets you navigate the screen using the same hand that’s holding the device, so you can find another use for the other hand. Then there’s the O-Click, an accessory that:

… lets you remotely operate the N1 camera even when you’re away from the device. Simply position the N1 and step back to include everything you want to capture. If you misplace your device, find it by setting off an alarm on the phone. O-Click fits on your keychain and supports a range of up to 50 meters, staying connected to your OPPO N1 via Bluetooth (BLE).

The rest of the smartphone’s hardwware specs are:

There’s no pricing information on the N1, but judging from that of OPPO’s other smarphones, it should be in the US$500 – $600 range. You may read the complete specs and detailed information about the N1 here. 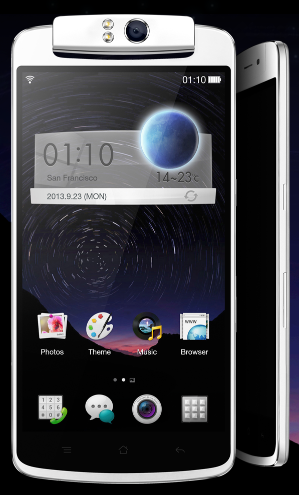 Another screen shot of the N1 Smartphone.