How to install Orange in Ubuntu 13.04

Orange, a Free Software released under the GNU General Public License, is a modular machine learning and data mining application developed at the Bioinformatics Laboratory, Faculty of Computer and Information Science, University of Ljubljana, Slovenia.

It is one of many Python applications that expert and aspiring data scientists may use to mess with data. Orange is cross-platform, but because there are no installation binaries for GNU/Linux distributions, installing it on your favorite distribution entails building it from source, which you can download from here.

The rest of this article shows how to build and install it from the downloaded source code. All the steps will be done from the command-line, so the first step is to start a shell terminal.

1. Change (cd)to the directory you downloaded the source code, which is delivered as a zip file, and unzip it by typing <strong>unzip orange-source-snapshot-hg-<date>.zip</strong>. The source is a nightly-build, so the date in the name of the file will not be the same for everybody.

2. Install dependencies: The build process requires GCC, Python and numpy development headers to be installed on the target machine. On a default installation of Ubuntu 13.04, Python (version 2.7) and GCC should already be installed, but not numpy (Numerical Python), so you will it by typing <strong>sudo apt-get install python-numpy</strong>.

But that’s not all. You’ll also have to install g++, build-essential, and python2.7-dev packages. Making sure all are installed will save you from dealing with errors during the build and installation process. For example, during the build stage, you will get error trying to exec ‘cc1plus’: execvp: No such file or directory if g++ is not installed, and error Python.h: No such file or directory if python2.7-dev is not installed.

Have fun playing with Orange. 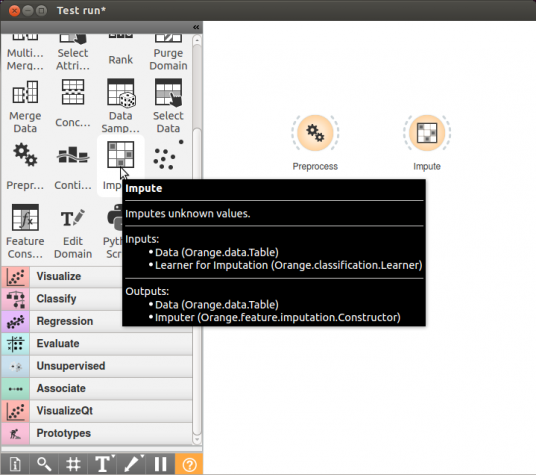 Please help me to solve this error

Do you have setuptools installed? If not, install it:

Note that the second command assumes that pip is already installed. If not, install it using <strong>sudo apt-get install python-pip</strong>

It stucks on this and nothing happens after this .

Someone please help me with this

Are you installing on the same distribution, that is, Ubuntu 13.04 or something else?

Hi
I meet a problem that when i use scatter plot to show my data,it appears error,and i can’t see anything,I don’t know what’s the problem:

I think the last line of the debug output (ValueError: Seed must be between 0 and 4294967295) holds the key to the solution.

Check the Random Numbers section of this PDF file for possible clues.

Hi
thanks your reply

i found out what’s the problem it is.

the source code of orange, scaling.py, it use sys.maxint to generate random_integer and feed to the seed.
The main point is that sys.maxint is about 64bit range of my pc but the seed(numpy random generator) just can accept 32bit integer only(i am not so sure about this)

Lastly, i change the range to 32bit and it work now!

Followed this to the letter. Installation was smooth. Thanks for that.
Had a glitch, some widgets did not show up e.g. in the Visualize tab only Attribute-Statistics, Mosaic Display, Sieve Diagram and Venn-Diagram were seen. No Scatter Plot, RadViz etc.
After some googling, found the answer @
http://orange.biolab.si/forum/viewtopic.php?f=4&t=2078&hilit=missing+widgets

In the context of Ubuntu simply execute the command:
sudo apt-get install python-qwt5-qt4

Thanks. For the stuff you’re working on, have you tried messing with your data using R?

I’m playing with R now and there are packages for just about any type of data analysis and visualization you want to do.

Also use R, you are right; it is very rich and, in vizualization the user has a lot of control. http://ocw.mit.edu/courses/sloan-school-of-management/15-097-prediction-machine-learning-and-statistics-spring-2012/lecture-notes/MIT15_097S12_lec02.pdf is a simple resource for ML in R to get one going, that all. May be it’ll be useful.
Wanted to learn a tool that works with python, hence orange. Dont know much about Weka, butwas told it interfaces with Java code and hence again Orange 😛
With the widgets it is quite nice to be able to hook up a few different learners and do comparative evaluation. Just picked that!

hi,
Windows Orange appears to have more features, is there a way to add them?

Unless you are going to try running it via WINE, I don’t see how you can add it to Ubuntu or any other distribution.

Awesome, thanks – that fixed it.

Do you (by chance) know how to install the orange-bioinformatics add-on for Ubuntu?

Do I just use:

Everything went well except for two modules:

How do I correct this?

Those modules did not come with Numpy, but are available with Scipy, so you can solve that error by installing the python-scipy package, or python3-scipy, if you are using any version of Python 3.