3. Install Boot-Repair After installation has completed. Reboot the computer. For all the times I installed this system, the computer rebooted straight into Ubuntu, without even showing its boot menu. And what happened is that a new entry was created in the UEFI boot menu called “Ubuntu.” It took several reboots before I could see the boot menu, and when I did, the expected entry for Windows 8 Pro was not even there. This screen shot shows what it loos like.

Notice that there is no entry for Windows 8 Pro, which is unusual. What this means is that I was not able into Windows 8 Pro. I had to do something extra to add an entry for it. That “something extra” involves installing and running a program called Boot-Repair. Installing it is done from the command-line, so start a shell terminal and type the following commands:

After installation has completed successfully, start it from the Dash or from the same terminal window you installed it from by typing boot-repair. The screen shot below shows the program’s main interface. The only thing you need to do here is click on the first button – Recommended repair. There are other options in an “Advanced options” window, but you don’s need to change anything there. 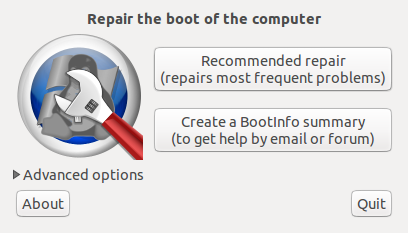 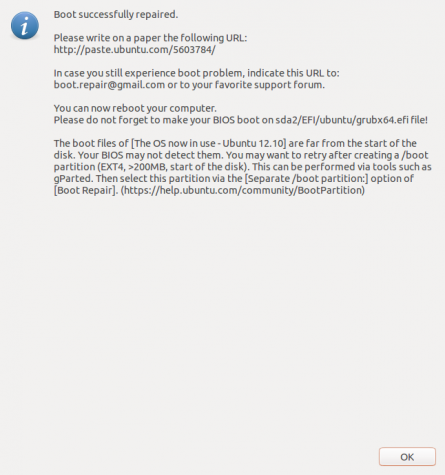 After installing Boot-Repair, you should now see entries for Windows 8 Pro in the boot menu. This screen shot shows what it looks like on the system used for this tutorial. 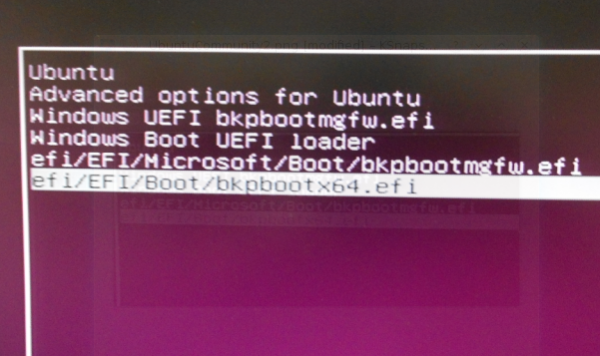 4. Install GRUB in a PBR The final task inside Ubuntu is to install GRUB 2 in the boot partition’s PBR. If you’ve forgotten the device name of the boot partition, it will be shown in the output of the df -h command. In the output shown in this screen shot, you can see that it is /dev/sda5. To install GRUB 2 in its PBR, type sudo grub-install --force /dev/sda5. Without the --force option, the system will not execute the command. You may now reboot into Windows 8 Pro. 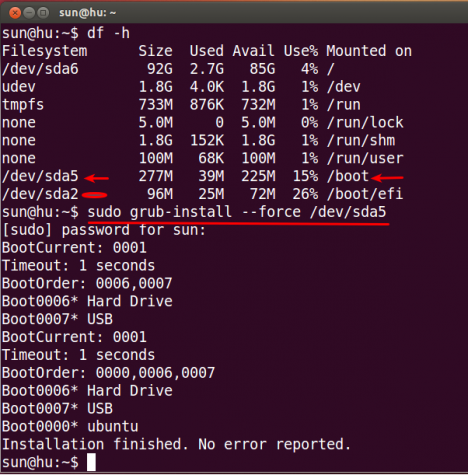 To accomplish the first task, you’ll have to download and install EasyBCD, a free-for-personal-use program from Neosmart Technologies. Download it from here. This is the program’s main interface. You should see an entry for “Ubuntu,” which I deleted. I chose to add mine manually. 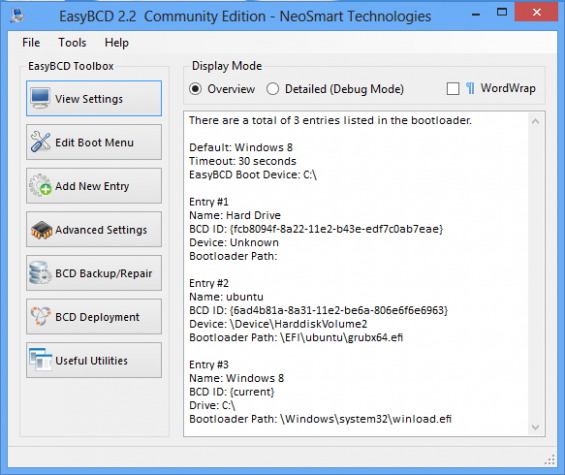 You can see it from the preview tab. You get here by clicking on the Edit Boot Menu tab. To restore Windows 8’s boot manager to the first sector of the HDD, click on the BCD Deployment tab. 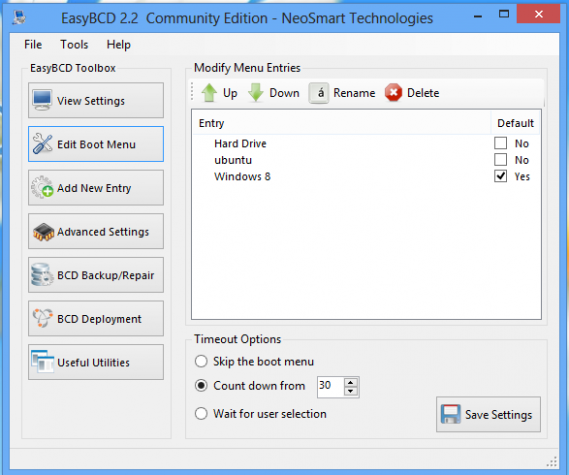 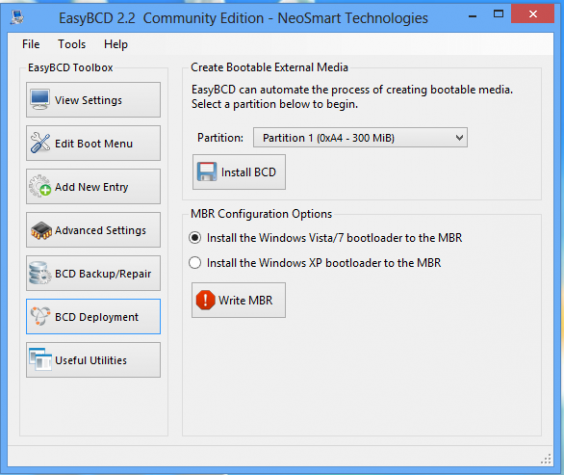 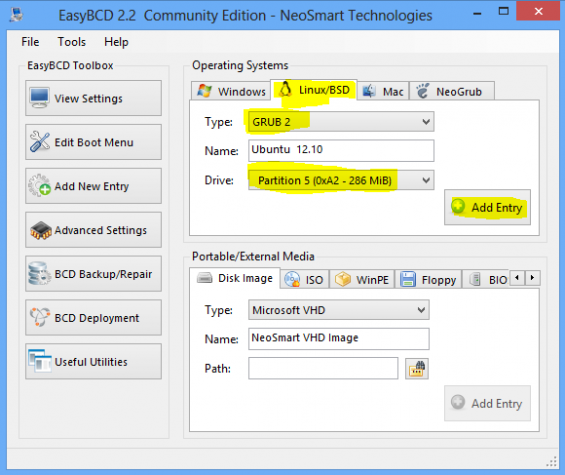 Here’s the new preview window. You may now reboot the computer. 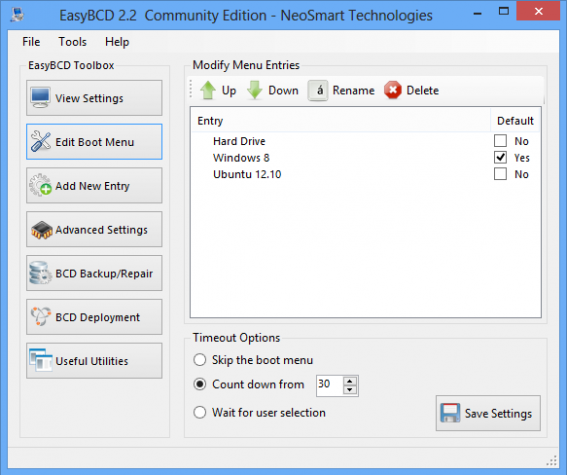 Notes: You’ll probably notice that the computer will not reboot in the same manner as when Windows 8 is not involved. You may have to go into the UEFI setup utility to set the computer to boot from a new entry called ‘Windows Boot Manager” or a similar name.

On my test system, whenever I set the computer to boot from the HDD entry in the UEFI setup utility or from the UEFI boot menu, all I get is a blank screen with a flashing cursor.

After installing Ubuntu, the entries you’ll find in the Windows 8 partition manager are shown below. The EFI System Partition (marked “EFI boot”) in this screen shot, is required on any UEFI system. Because it was created by the Windows 8 installer, there was no need to create another one during the installation of Ubuntu. All operating systems installed on the HDD will see and use it. So it will always show up in the output of the df -h command. If you look at the first image under section number 4 (Install GRUB in a PBR), /dev/sda2, mounted at /boot/efi, is the EFI System Partition. 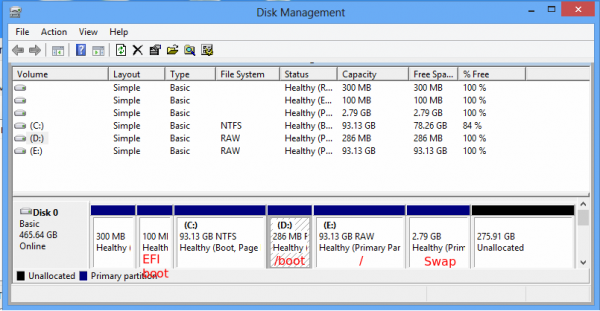 From Ubuntu’s disk management tool, you can see more information about the EFI System Partition. 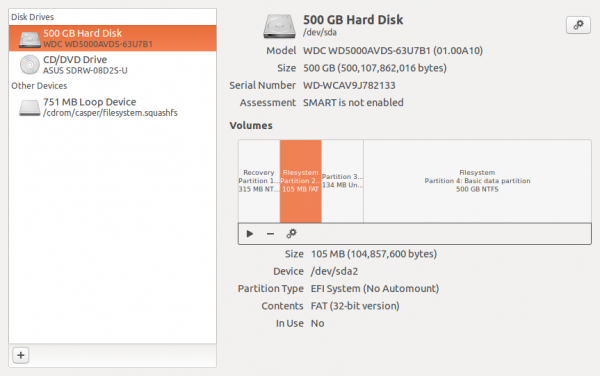