EU Commission fines Microsoft $731 million, but does it really matter?

The EU Competition Commission, which levied a fine on Microsoft, had indicated long before the announcement what was in store, so “EU fines Microsoft” was expected. What we did not know was how much the fine was going to be.

After the agreement, users of the Windows operating system saw a small window on their desktop just like the one shown in this image that let them choose a Web browser other than Microsoft’s Internet Explorer. But that window disappeared after a system upgrade early 2009. Microsoft attributed it to a glitch, a “technical error” that they did not bother to fix.

Knowing Microsoft, you know that there was no glitch or technical error. It was just business as usual. In late 2012, Microsoft was notified by the EU Commission about the possibility of a fine, which based on agreement, could be as high as 10% of a year’s revenue. Based on Microsoft’s revenue in 2012, that could have been about $7.4bn USD. Instead, the commission settled for $731m USD, or 561m euros.

In a report published at the BBC, Joaquin Almunia, the EU’s competition commissioner, said the fine was intended to send a message to other companies from ever failing to comply with an agreement. That sounds good, but if the commission really wanted to send a message, Microsoft should have received the maximum fine – 10% of annual global revenue.

That would have gotten everyone’s attention. A fine of $731m USD sounds like a lot of money, but to an outfit like Microsoft, Apple, and Google, it’s chump change. If you want to send a message, make it hurt the other party at the receiving end.

By the way, over here in our America, it’s still business as usual.

The main reason for writing this article is to highlight what effect, if any, Microsoft’s “technical error” has had on its Web browser’s market share in Europe and elsewhere. Did the “glitch” enable Internet Explorer to remain the dominant Web browser? And was it necessary to make Microsoft pay?

Available stats for the time period that the “technical error” happened says no. Despite Microsoft’s shenanigans, Internet Explorer lost ground in Europe. You can see the evidence in the following graphs. 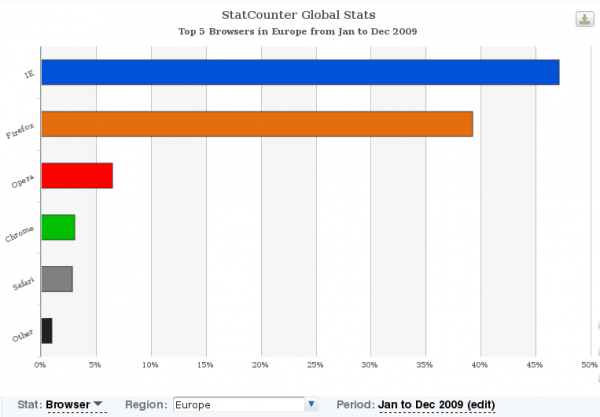 In 2010, the gap between Internet Explorer and Firefox had narrowed, with Google Chromium now a distant third. 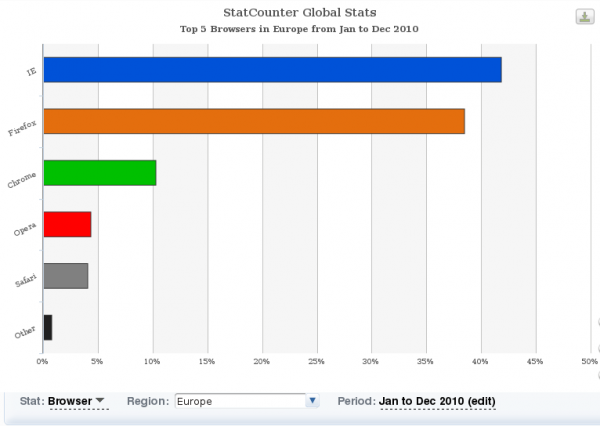 But by 2011, Firefox had become the top Web browser, with Internet Explorer a very close second and Chromium catching up fast. 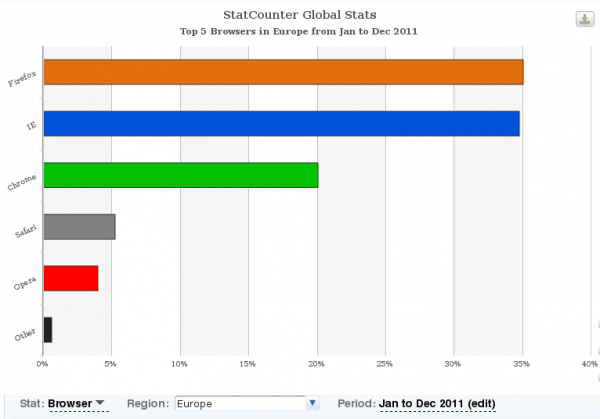 By 2012, Internet Explorer was the third most popular Web browser in Europe, with Firefox in second place, and Chromium now the top browser. 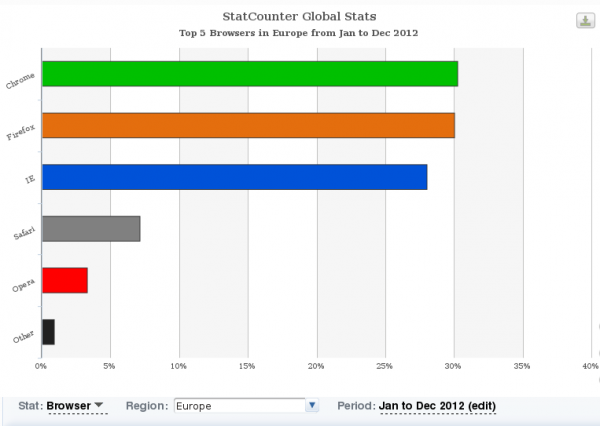 This is what the situation looks like so far in 2013. Chromium is clearly pulling away, and Internet Explorer just keeps losing ground. 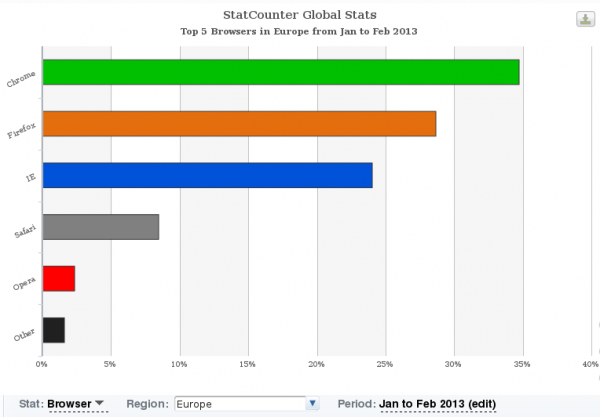 So you see, folks in Europe don’t care a whole lot about Microsoft’s Web browser, despite that “technical error.” Does that mean that the EU should not have bothered with the fine? Heck no! Companies should be held accountable for their transgressions. In other words, consumers and other players in the field have to protected from the likes of Steve Ballmer and company.

Interestingly, Internet Explorer is still the top Web browser in the US of A. This is what the picture looked like in 2012. 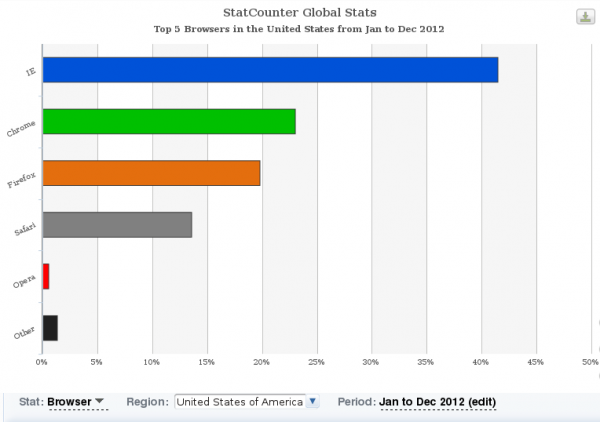 So far in 2013, it’s still holding its position, but has seen a slight negative change in market share. Maybe, US folks just lovie Stevie B. and Billy G. way too much. Home field advantage? 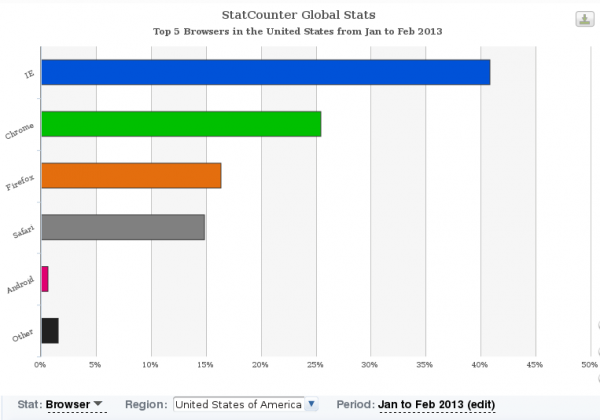 Who really cares? If you are in business, you have to write code for every browser anyway. The browser wars don’t really mean anything. In fact, a monopoly would be a good thing!

I remember pulling up some website and asking my son to tell me which was IE and which was Chrome. He couldn’t tell, and neither can most people.

A storm in a tea cup and always was.

“In fact, a monopoly would be a good thing!”

That, my friend, says a lot about you. And what it says is not something to trumpet.

It Matters! The fines and reinforced agreement regulations do Matter! Because Microsoft would otherwise continue to flaunt it’s financial and political might in never ending attempts to crush and vilify any and all competition and foreign authorities which have found the company to have deceitfully and intentionally broken laws and regulations that apply in those jurisdictions to the sale and use technology.

The only way that large, monopolistic and oppressive corporations, particularly like many in USA can be brought to heel in their quest for world domination is via huge, huge dents in their “pocketbooks”. Good and ethical business practices, reason, negotiations, laws and regulations have no importance or concern to these behemoths that see and care only about utmost financial gains, even at the expense of local enterprise or the consumers/citizens they supposedly serve.

I agree that regulations and fines matter, but my point is a fine of $731 million when the max is almost S7.5 billion does not put enough “dent” in Microsoft’s pocketbook.

So as far as MS is concerned, it does not really matter, because the price for willfully flouting the rules is taken in stride, just like the “fine” that Google is about to receive for wardriving.

Having “jumped ship” a long time ago from the Windows camp…I see it as a non-issue. Just because your OS comes with a certain browser…doesn’t mean you can’t open that SAME browser, and install WHATEVER browser you like! I remember when IN6 came out, I had become interested in Firefox, so I downloaded it…installed it, and have not looked back since. After leaving Windows for good, and making the transition to Linux, I continued to use Firefox, yes…there are other browsers…(Opera, Chromium, Midori, Epiphany, etc.) but I’m comfortable with Firefox so I’ll continue to use it. As for Internet Explorer, Microsoft and the E.U.Commission, I feel that the fine should have been applied in it’s strongest form, not to “punish” Microsoft, (even though they DESERVE it! LoL!) But to show that ALL entities that are going to do business should obey the same rules! As for the General Populace, WAKE UP!…do some READING UP on various things out in the Wild Wide World! There’s more than just Microsoft and Windows out there! Try something different. see if there’s something out there that suites you more! and let Windows….the burgeoning, cumbersome, wounded, limping animal find some quiet place to fade away!