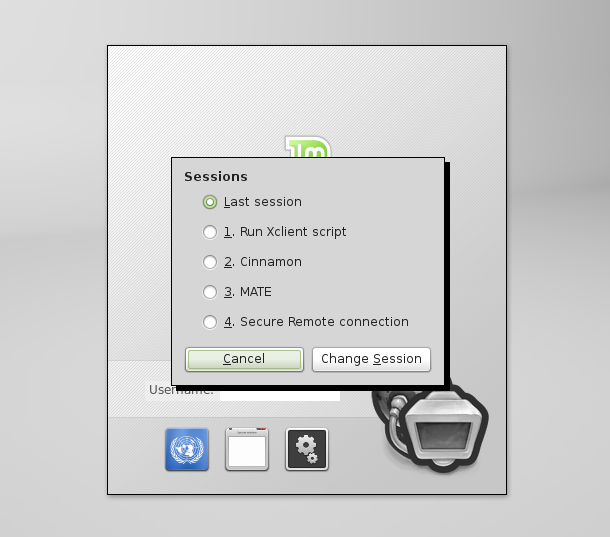 Linux Mint Debian 201204 MATE/Cinnamon is the latest edition of Linux Mint Debian, a desktop distribution based on Debian. It offers a choice of two GNOME-based desktop environments – MATE and Cinnamon. MATE is a fork of GNOME 2, while Cinnamon is an attempt to bring sanity to GNOME 3, to make it look like something designed for use on desktop computers. 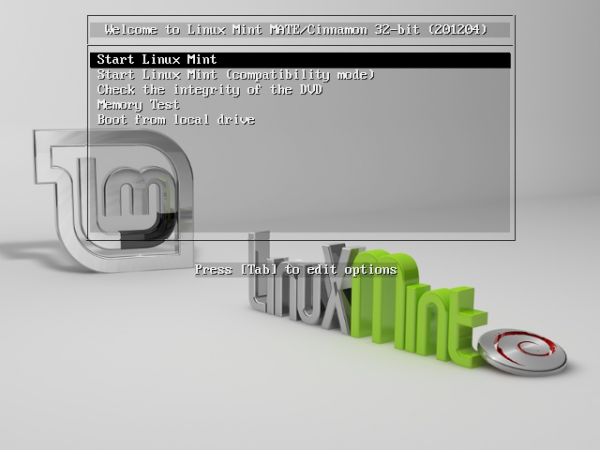 The installation program is very basic, lacking support for disk or file system encryption, LVM, the Linux Logical Volume Manager, and boot loader password protection. Its automated disk partitioning feature creates just two partitions – one for Swap, the other for the root or main partition. Unlike the installers on other distributions that I have used or reviewed, it does something unusual – make the Swap partition the first partition. Other installers will typically make the Swap partition the last. You might be interested in reading manual disk partitioning guide for Linux Mint Debian if you want to create a custom partitioning scheme for installing this distribution. 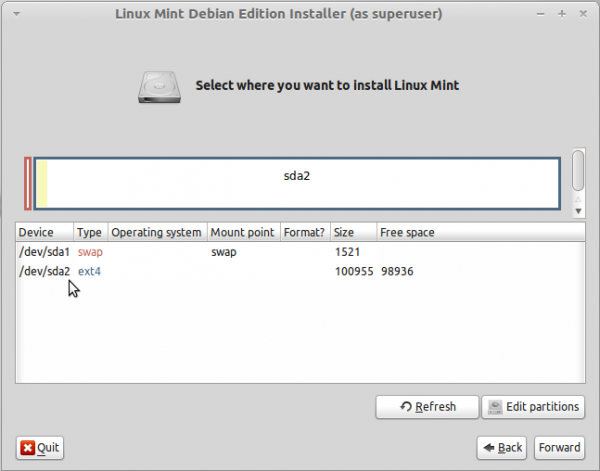 A new installation of Linux Mint Debian 201204 MATE/Cinnamon takes up about 6.3 GB of disk space, and GRUB 2 is the boot loader used. As noted earlier, there is no support for boot loader password encryption. 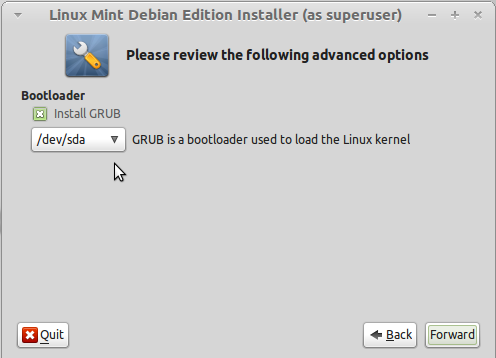 On the login screen, you get to choose which desktop environment to log into. MATE is the default. 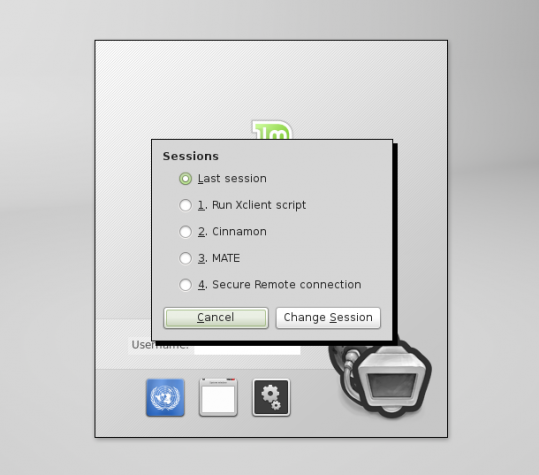 This is what the MATE desktop looks like. The menu is the same mintMenu available on the Ubuntu-based edition of Linux Mint. Using Linux Mint Debian with MATE is just like using Linux Mint GNOME 2. 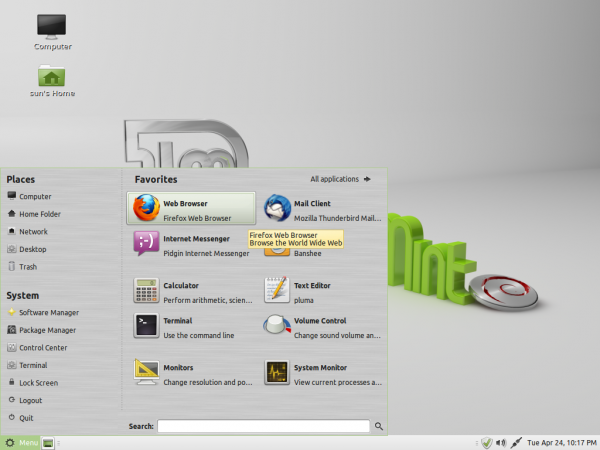 And if you opt to use Cinnamon, this is what the desktop looks like. I actually like it much better than MATE, as it offers the modern features of GNOME 3, but in a fashion that is a lot more user-friendly than the default GNOME 3 desktop. The latest version of GNOME 3 is GNOME 3.4, but Cinnamon is only powered by GNOME 3.2. 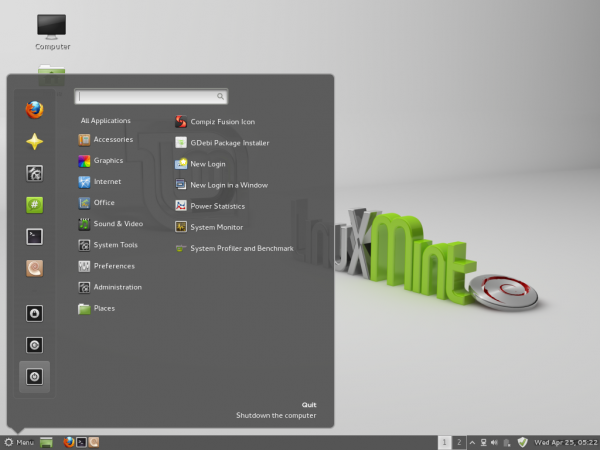 Cinnamon, in my opinion, is where the fun is. The default desktop effects are really cool. Unlike the stock GNOME 3 desktop, you are not fighting the desktop just to get stuff done. Out of the box, the desktop features a bottom panel, but it could be configured to be at the top, and to show a top and bottom panel at the same time. One of the applets on the panel provides access to Cinnamon’s administrative settings. Clicking on it is like right-clicking on the KDE panel, though it gives you a few more features than those available in KDE’s context menu. You can, for example, restart Cinnamon, which is really nice. It is like the Restart option in YALI, the installation of program of Pardus, which makes it possible to restart the installer without rebooting the computer. 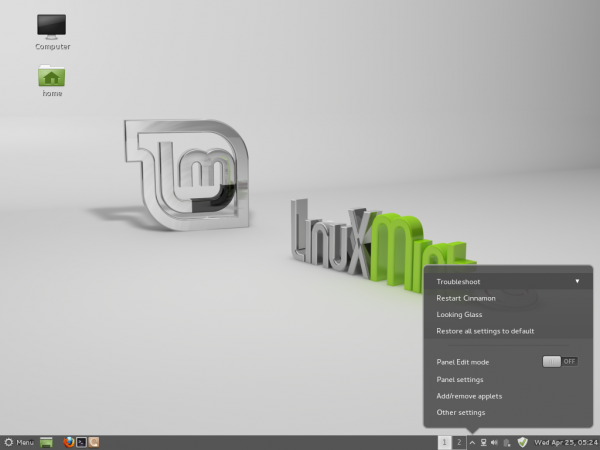 Another option available on Cinnamon’s applet menu, is Looking Glass. The name should offer a clue about its function, but it is still very buggy, at least on my test installations. Starting it is no problem, but closing it is almost impossible. Perhaps there is a hidden close feature that I failed to notice. 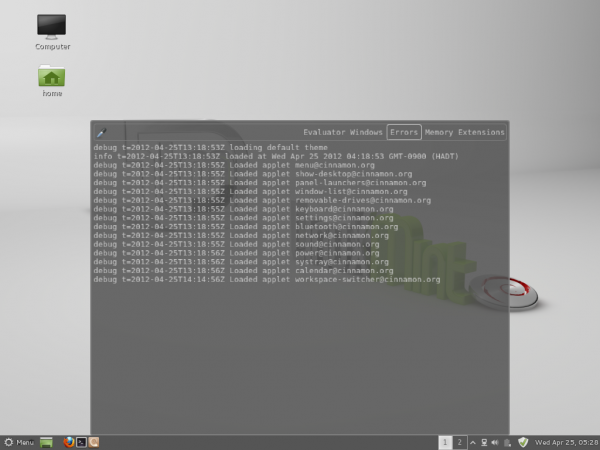 Whether using MATE or Cinnamon, you get the same set of installed applications. The major ones are:

To install mate on debian
Add one of MATE repositories to your source.list

# Now to install MATE choose 1 of the 3 apt-get lines below.

# this installs the base packages

# or this to install mate-core and more extras

#or this to install mate-core + mate-desktop-environment and even more extras.

I am running Ultimate Edition 3.4 with MATE, Cinnamon and KDE installed. I usually use MATE for most of my stuff, I do like Cinnamon and am currently using GBOME Classic. Ah, choice!

Ahhh, the most amazing secret about linux that no one knows, Choice!

I have moved to Linux Mint`s Cinnamon desktop with a custom Gnome Shell theme and I am very happy with it. I have a serious problem with my Debian Squeeze installation so I have moved over to Mint.

Very happy with it as I said. I even installed Unity to try that out on Mint.

They (LinuxMint) really need to get rid of that Big Ugly Computer with a CRT from the login screen though. Otherwise great stuff.

Which do you prefer — KDE or Cinnamon?

Also, would it be better to install Cinnamon on top of Ubuntu, rather than using Mint? That would result in a better security posture out of the box, especially if Ubuntu’s alternate installer was used with full disk encryption. Would there be any downside?

Personaly i prefer kde for its features and design… the only true problem is that i find it really buggy even if its latest release is, by far, the most stable of all. My machine crashes randomly and has overheating problems, my resources are always low… Once again this is only my situation, and because of this, even though it’s a bit sad, i had to settle with another DE, that was, precisely, cinnamon. Its for from prefect, but it runs like a charm, is satble, cool effects and i addapted preety well with its “workflow management”. For the second question, i don’t see any problems with installing on top of ubuntu, i just read so time ago that the person responsible for the ppa doesn’t work on it anymore, so the version may be outdated. Finnaly, the disk encryption, i recommend using truecrypt, a really nice application that may suite your needs. Hope i was helpful 😉

All in all not a bad review, Unfortunately this release is lacking a lot of basic admin features like auto login cant be altered after install, alian does not work for rpm files, some times you need a pass word to logout even though your the only user, screen can not be made to stay active, etc these minor glitches spoil a almost perfect distro

The Looking Glass isn’t still very buggy from your point of view just because it doesn’t close.

Try pressing Esc and it will close like a charm. 😉