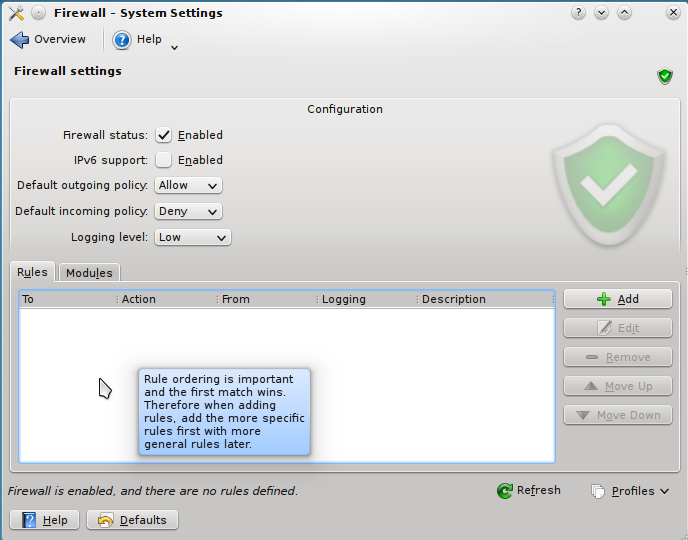 Sabayon 8 is the latest version of Sabayon, a part source, part binary, multi-purpose Linux distribution based on Gentoo. This is a distribution that I have often criticized for missing critical components and being very buggy, but the developers seem to have gotten their act together.

Sabayon follows a rolling release development model, which means that once you install a new system, you may never need to re-install – ever. It is a development model I think all distributions should follow.

While the project provides installation images for all known desktop environments, only those for the 32- and 64-bit editions of the K Desktop Environment, GNOME 3, and Xfce, have so far being made available for download. Going by the distribution’s release history, installation images for other (supported) desktop environments should be released soon. This article offers a summary review of Sabayon 8 KDE. The boot menu is shown below. 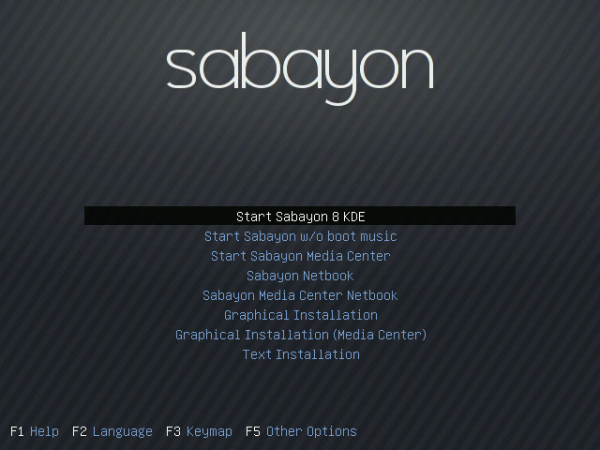 Considering that is no major difference, other than the usual software and kernel version upgrades, between Sabayon 8 and Sabayon 7, I will just provide a summary of the features of the distribution. Just enough information for those who have not used it before.

Starting from the installation program, it is a fork of Anaconda, the Fedora system installer. Like Anaconda, it has support for LVM, the Linux Logical Volume Manager, disk encryption, RAID and a few other features that most users will never use. It, however, has not kept pace, feature-wise, with the original Anaconda. For example, in the version of Anaconda that shipped with Fedora 16, the last stable release of Fedora (see Feature preview of Fedora 16 installer), a non-LVM partitioning scheme can be created automatically, and GPT, the GUID Partition Table, is the default on standalone installations. You will not find those features in Sabayon’s installer. Not that they are killer features you cannot do without, but they are nice to have. 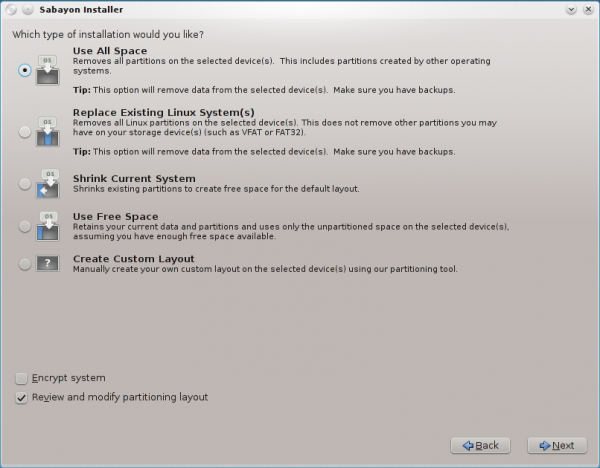 This screen shot shows the default partitions created by the installer, with disk encryption enabled. You can tell that the partitioning scheme is not based on GPT because the first partition does not have the bios_grub flag. 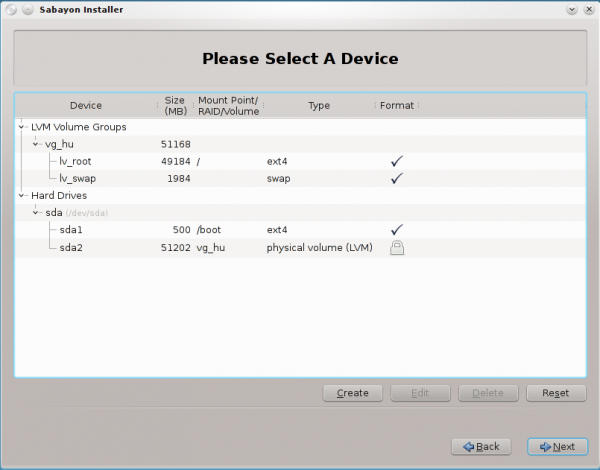 Most distributions entertain and educate you about the distribution with a slideshow while the system is being installed, but none that I am aware of take to dissing another distribution in the process. Fabio Erculiani and his team must feel very confident about their product that they have taken to belittling Debian. Not a very good behavior especially given Sabayon’s past history of being buggy. Sure they have cleaned up their act a bit, but I do not think Fabio is in a position to belittle another distribution. 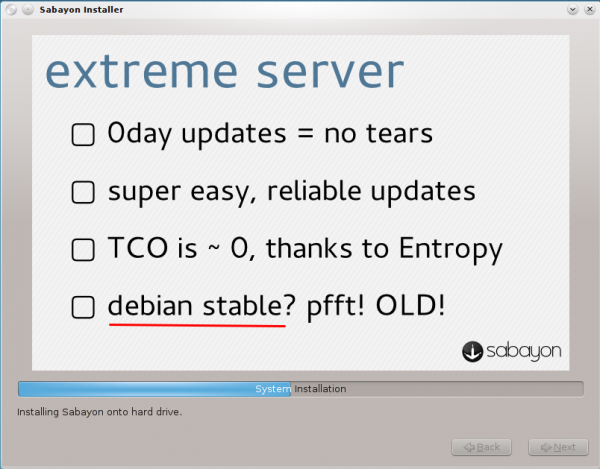 Sabayon 8 KDE ships with KDE 4.7.4, and the default desktop is shown in this screen shot. For the most part, a default installation of Sabayon 8 KDE just works. Almost every application and service you will likely need, are installed. For example, Java JRE and Adobe Flash plugin are installed. (You know what that means.) Also, libdvdcss, the library that makes it possible for VLC, the installed video player, to play encrypted video DVDs, is also installed out of the box. Need a media center application? XBMC is installed. Need to relax a bit playing computer games? There are several installed by default. 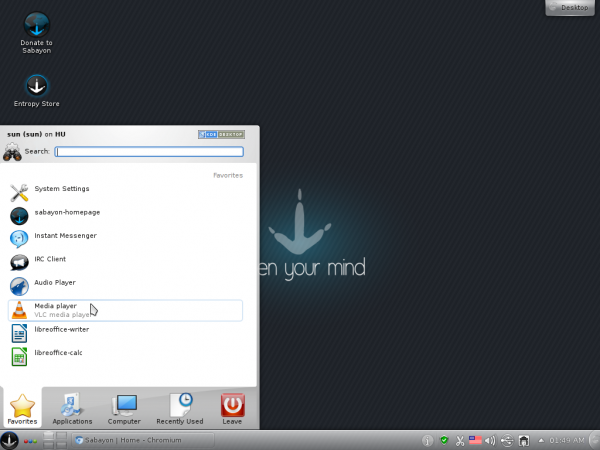 Any application you need that is not installed can be installed easily from the Entropy Store (Sulfur Package Manager). A common complaint about Sabayon’s graphical package manager is that the default color scheme makes names and description of packages very difficult to read. The screen shot below shows a view of the list of some installed applications. Light green and light brown text on while background will not pass any accessibility test. The good thing is the color scheme is configurable. 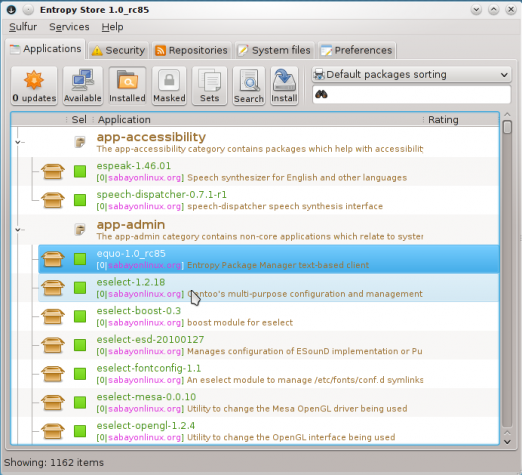 This screen shot shows the result of my attempt to make package names and descriptions less painful to read. Not perfect, but better than the default. 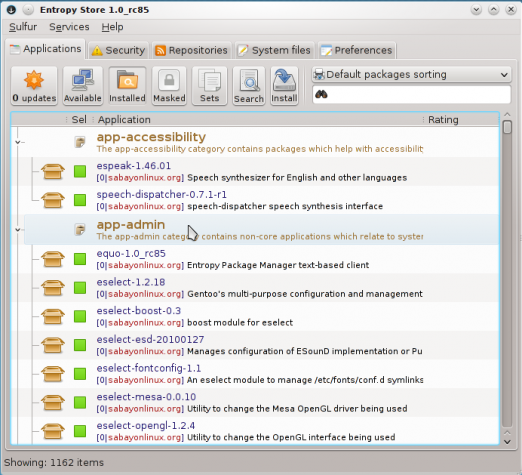 Sabayon is one of my favorite distros, Fabio is doing great work, I think more people should give sabayon a try, it’s not that harder than ubuntu or mint. I’m using the xfce edition and it works great – network, surround sound, nvidia video – everything works perfectly. The only thing i don’t like is the memory usage, but anyway, sabayon is one of the best distros out there and given the fact that there isn’t a rich corporation behind it- it speaks well about its developers.
Cheers from Bulgaria !

Thank you for the review, and in particular for spotting the interface color issue in Sulfur. I opened a bug report about it: https://bugs.sabayon.org/show_bug.cgi?id=3032, I hope Fabio can have a look at it and solve.

I’ve installed Sabayon-8 on one of my hard drives and am very impressed. Everything I wanted it to do, was done out of the box.