Anti SOPA/PIPA Protest: How it happened and what you can do 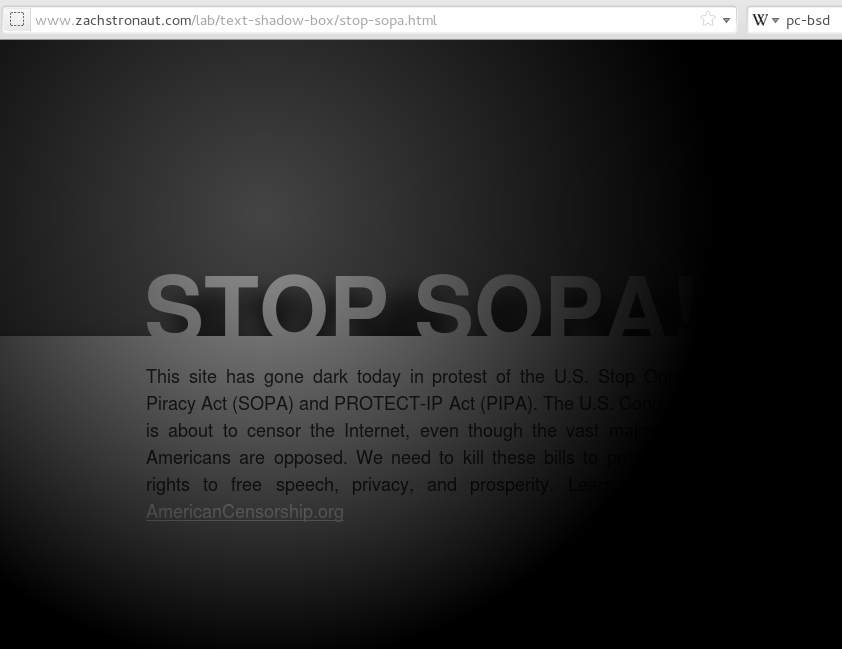 The protest against Stop Online Piracy Act (SOPA) and Protect Intellectual Property Act (PIPA) has come and gone, but the fight is just getting started. Proponents of SOPA, a legislative proposal thought to be dead by those opposing it, have promised to make another pass at making it the law of the land, and PIPA is due for a test vote on January 24. This thing is just getting started.

If you have been living under a pebble and have no idea what SOPA and PIPA mean, watch this video.

Many prominent online properties participated in the protest. The slideshow below shows what the front page of some of those websites looked like yesterday.
[dmalbum path=”/wp-content/uploads/dm-uploads/SOPAPIPA/”/]

Though the protest has ended, the fight is just getting started. Here is how you can help: If you have not called or emailed your congressman or congresswoman already, please do so now. And if you want to know where your representative stands on either proposed law, view this SOPA map and this PIPA map. It may just get to the point where recall elections have to be organized against supporters of these proposed bills. That might be the most pointed method of driving the point home. A luta continua.

Quote “It is our hope that the White House and the Congress will call on those who intend to stage this “blackout” to stop the hyperbole and PR stunts and engage in meaningful efforts to combat piracy.”

Only a tool of the MPAA would even stoop to saying this.

We the people of the US need to take back our internet for us to use as intended and not let the likes of GOV and the CORPS that own parts them, dictate to us how we can use the internet.

The blackout was a rediculous way to make a point, I’ll admit that. It does however highlight the majority feeling on this issue and it appears as though the well lined pockets of our politicians in Washington are not listening (big surprise). The biggest push behind this is obviously the MPAA and Hollywood production companies. Lets think for a minute about how badly all this “piracy” is effecting them. On average a movie that makes the theater earns back in the first week everything they spent producing the film plus %50. These are figures in the millions of dollars. Typically pirated copies of the movies aren’t produced on a large scale until they come out on disk and people can get decent quality versions of it. The pre-disk copies of the movie are typically so horrible in quality that it actually makes people want to buy the movie when it is released so they can see it in a far better setting.
Even amongst software companies, piracy generates a push to further innovate their products to bring in more revenue and stay ahead of the game. I don’t support piracy, I don’t think it’s ok in any way, it is theft, but it also has it’s merits to the society we’ve built. The internet is last frontier or semi-freedom we have. Down with the proposed “Great Firewall of the US”, stand for the Freedom of Information!

Before the blackout, I also thought it would be a “ridiculous way to make a point,” but the manner it was implemented changed my mind.

If just blacking out for a day was the goal, then it would have been a waste of time, but the way they made it easy for people to contact their congressperson with a protest letter was what made it an effective campaign. And the publicity it garnered brought it to the attention of a wide range of people who might not have had any interest in the proposed legislations.

A significant number of those who supported the proposed bills have already changed their minds. For example, Marco Rubio, congressman from Florida and a co-sponsor of PIPA, has flipped. He said that most of his colleagues did not bother to read the the proposed bills before they jumped on board to destroy the Internet. For all the pains their mums went through to give them a pair of eyes, you’d think these guys will actually use them to read stuff this important.

At last count, 18 Senators have dropped support for PIPA. So it has not been a “ridiculous way to make a point.” But like I wrote in the article, a luta continua, because as Marco Rubio wrote on his Facebook page, “we should take more time … and come up with new legislation that addresses Internet piracy while protecting free and open access to the Internet.”

That, in my opinion, is a politician’s way of saying, “we gotta find a way to pass this thing through the back door.”

Want to know how your senator stands on this issue and how to reach him or her, visit http://opencongress.org.

It is our hope that the White House and the Congress will call on those who intend to stage this “blackout” to stop the hyperbole and PR stunts and engage in meaningful efforts to combat piracy.”

Well, at least we know who’s paying you.