Installing new applications or removing those already installed is made easy by AppSet-Qt, the graphical interface to pacman, Chakra’s package manager. It looks slightly more polished now than the last time I reviewed Chakra, but does not look as visually appealing as Ubuntu’s Software Center. It does take care of business, however, and in a fashion that I prefer over Software Center’s: Starting it does not require authentication, but it allows queuing of applications for installation, so you do not have to authenticate for every application that you want to install.

One option that should have been enabled by default is “System Files” (arrowed). If left unchecked, searching for certain applications will return no results, even though they are available. For example, a search for libdvdcss came up empty, but after enabling “System Files,” a search for the same application showed that it is available but not installed. 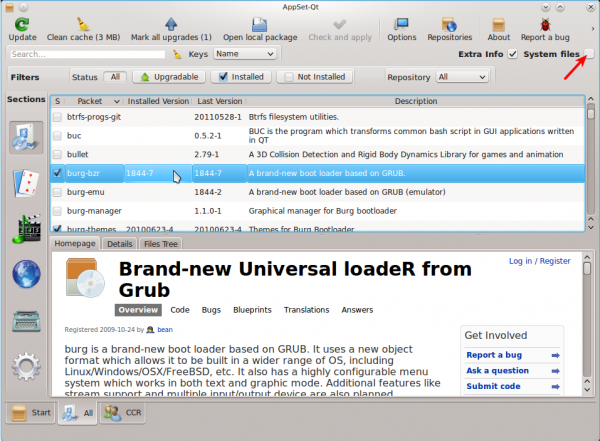 This screenshot shows the configuration settings. By default, it is set to check for updates every hour. I think that is too aggressive, but you can always change it from the Tray tab. The default view that you see in the image above is the Standard graphics view. If you want a different look, just click the radio button next to Enhanced. 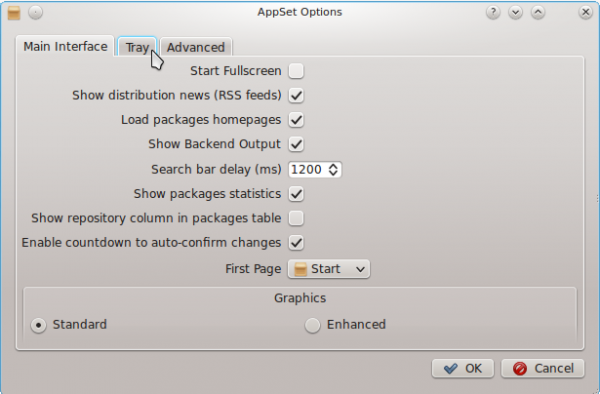 That gives you this look. I do not like it because it adds no real value to the application. But that is just my opinion. 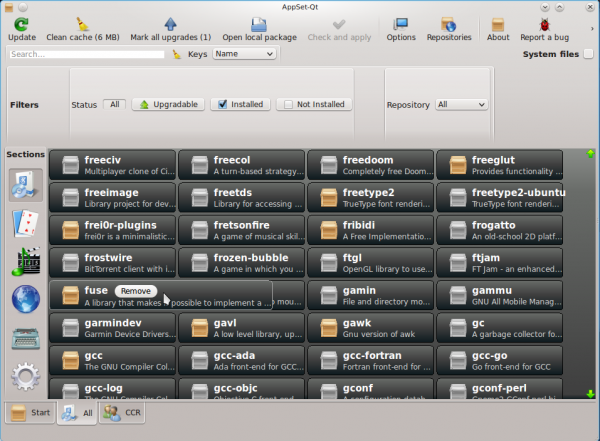 If you did not install any bundles during the installation process, the Bundle Manager makes it very easy to install any available. And there are 29 to choose from. If you like playing with bleeding edge stuff, there is Firefox nightly builds to keep you happy. The Bundle Manager is just like another package manager, with its own update notification system. A minor inconvenience then is you have two update notification systems to monitor. The test installation that the image below was taken from had Firefox 7.0.1 installed. Two days later, an update for Firefox 8 was available. 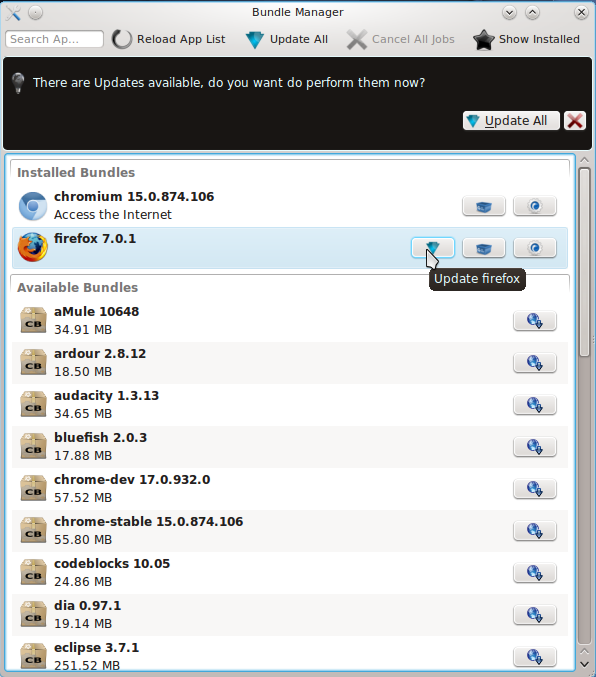 From the command line, managing services and daemons is very easy, but Chakra has a graphical application for doing that and more. It is called rcconf-settings, and it is the best services manager I have come across in any Linux distribution. Pardus‘ services manager and that of OpenIndiana are also good. However, they are not as feature-rich as Chakra’s. The only problem is, rcconf-settings is not installed. Why? I have no idea. The next three screenshots show the features of rcconf-settings:

This one shows the daemons running on a new installation of Chakra. You enable or disable an entry by double-clicking on it and clicking on the radio button that appears. You can also add a new entry, but since there is no existing list to choose from, you will have to know the name of the service or daemon you want to add. 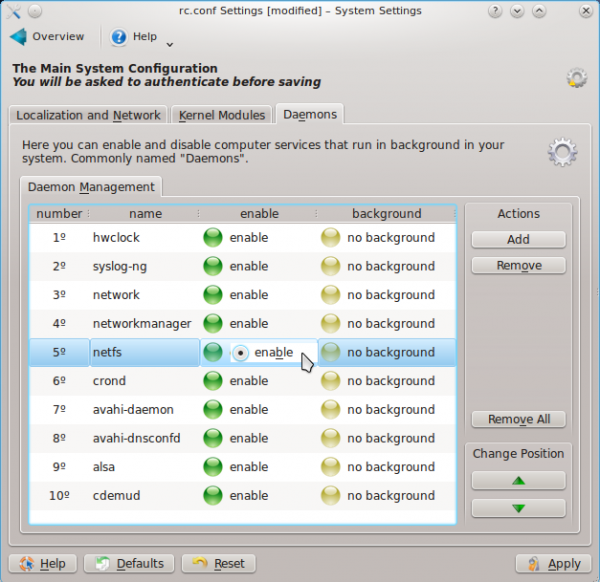 This screenshot show another feature of rcconf-settings. You can use it to manage kernel modules. 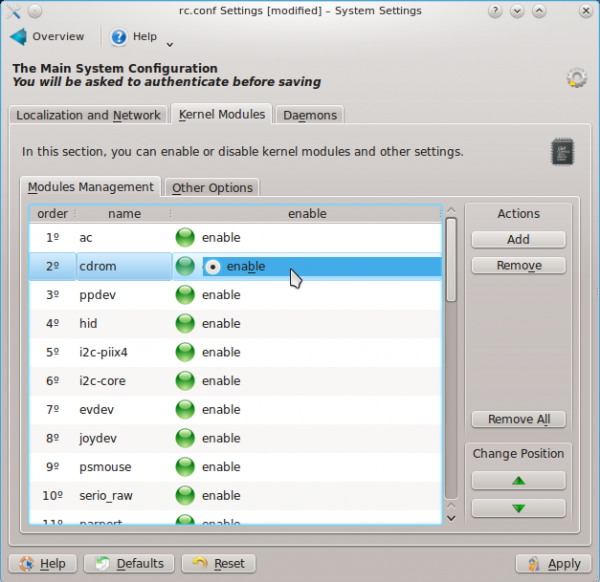 And this one shows the last feature of this application. You would think an application like this would be installed by default. 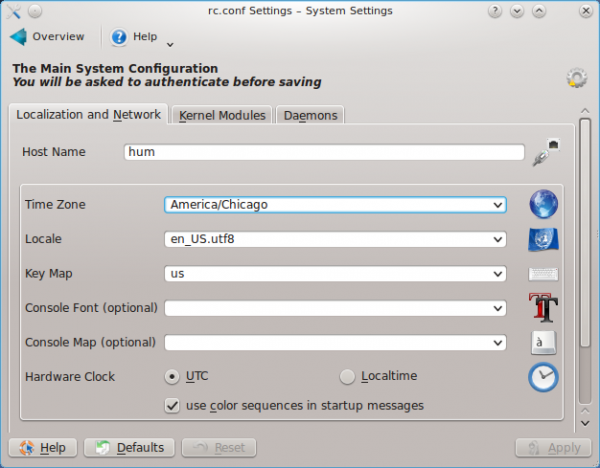 Physical and Network Security Features: By default, Chakra has no physical security features; disk encryption and boot loader password-protection are not supported by Tribe, the installation program, though you can set up a password for BURG, the boot loader, after installation. On the network security front, there are no open ports, but the firewall application, ufw, is inactive, which gives Chakra a network security posture that is just as bad, if not worse than its physical security profile.

There is a graphical firewall application installed and it is the KDE Control Module (KCM) for ufw, one of three graphical interfaces for configuring and managing ufw rules. 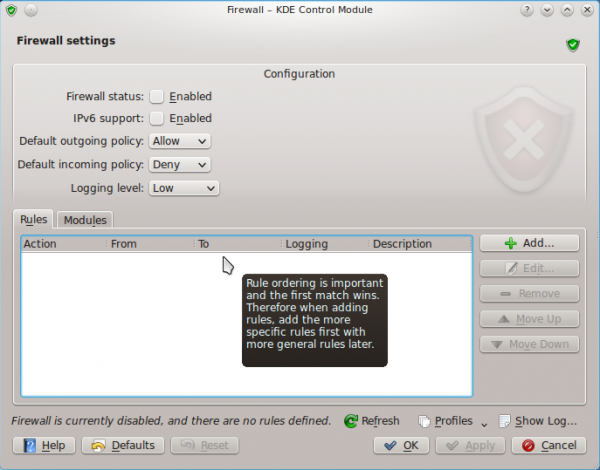