The first partition we create will be for /boot. Most distributions now assign a disk space of 500 MB to /boot. You could go lower. 300 MB to 500 MB is a good range. The default file system is ext4. You do not have to stick with that. I chose ext2. The mount point should be /boot.

Note that by default, the installer creates this and subsequent partitions as logical partitions. Better to stick with the default. OK.

The next partition will be for /, the root file system directory. A new installation of Ubuntu 10.10 requires less than 3 GB of disk space. So any value higher than that should be good. The default file system is ext4 and the mount point should be /. OK.

The third partition will be for swap. About 2 GB should be sufficient for most systems. Instead of a file system, select “swap area” from the dropdown menu. OK.

The last partition will be for /home. The rest of the disk space can be assigned to this partition, and the mount point should be /home. OK.

With the partitions created, the next step task is to select where GRUB, the boot loader, should be installed. The default location is on the MBR of the hard disk. But that is not where we want it because that will overwrite the Windows boot loader. The Only place left to install GRUB is on the /boot partition. Recall that the boot partition, /dev/sda5, is the first partition created in this tutorial. That is what you need to select under Boot loader section. 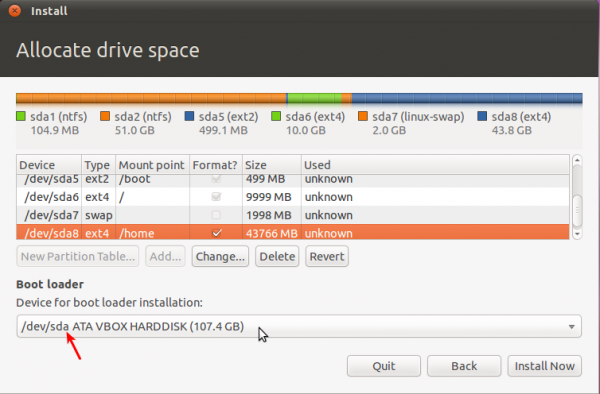 Related Post:  How to add an entry for a Linux distribution in Windows' boot menu

This is what the window should look like after you have made your selection. Be sure to verify that the Windows partitions, /devsda1 and /devsda2, will not be formatted. Click Install Now to begin the installation. 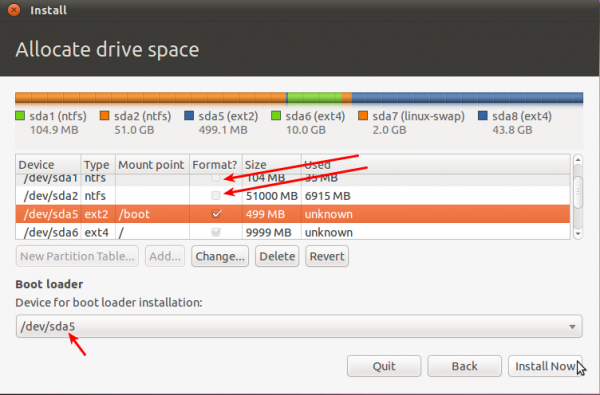 Related Post:  Homerun: Quite possibly the best app launcher for your desktop

After installation and reboot, the computer will boot into Windows. That is expected. The next task is to download and install EasyBCD, a free program from NeoSmart Technologies. It makes it easy to edit the Window boot menu. Once installed, launch it. The image below is what will open. Click on the Add New Entry tab to begin. 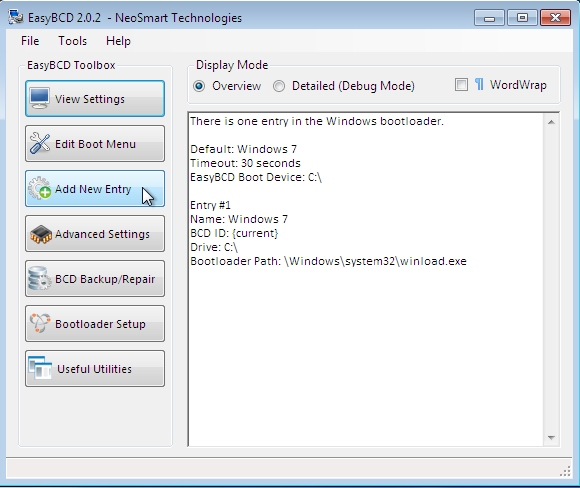