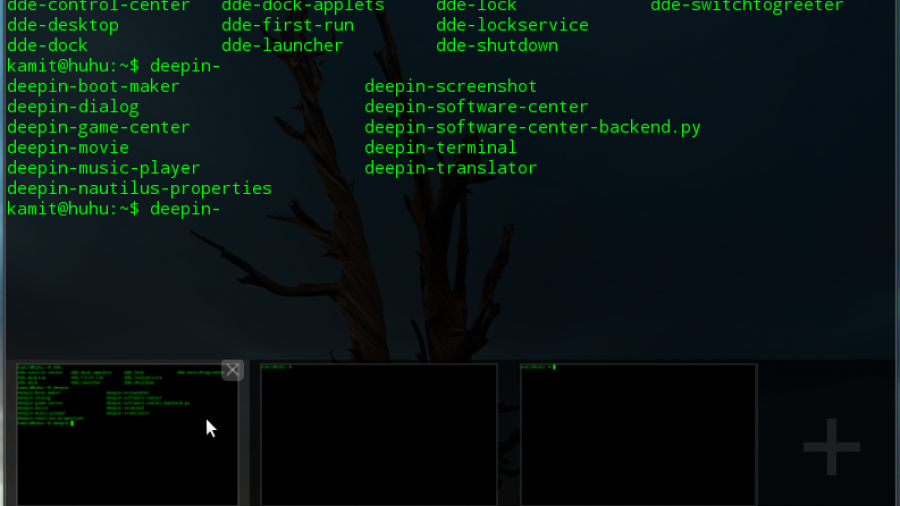 The Launcher This is the desktop’s menu and a much better implementation of a fullscreen application launcher than that of the default GNOME Shell. Application icons are presented in a categorized flow that’s easy on the eyes. The search feature works very well too. This is one aspect of the desktop that passed my test with flying colors. That said, I’d love to see a tooltip that gives a brief description of the each application on mouse-over. Below is a screengrab of the Favorites view of the launcher. 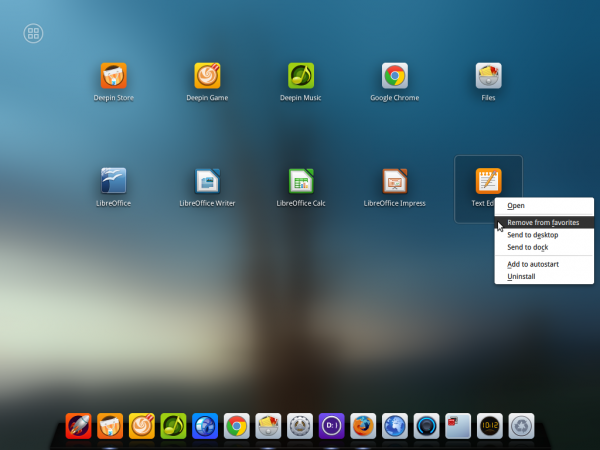 And here’s a view of applications view. 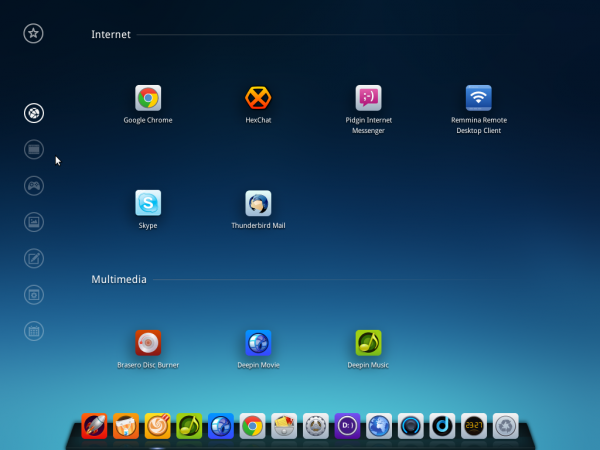 The Control Center is the most compelling feature of the Deepin 2014 desktop. I think this is the type of design that Microsoft tried to implement in Windows 8, but failed. Satya Nadella should try a test installation of Deepin 2014. Unlike the control center or system settings of other desktop environments, no window is opened if you click on the Control Center’s icon on the dock or bounce the mouse cursor off the bottom-left Hot Corner. It just slides out from the right-edge of the desktop and slides back in when you click on any part of the desktop or bump the hot corner with the mouse cursor. 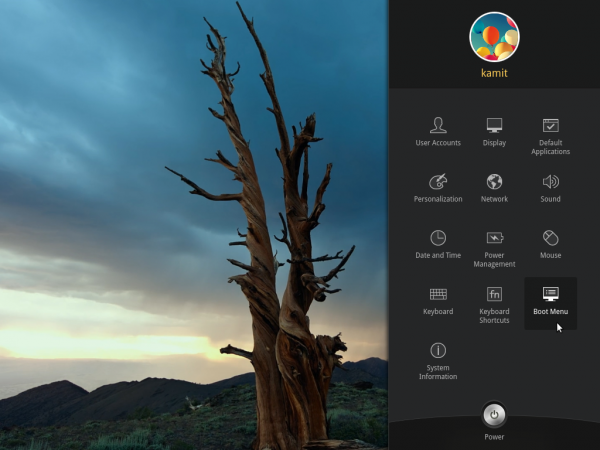 Not all the modules of the Control Center in Deepin 2013 have been implemented in this iteration. For example, changing the system font, which should be part of the Personalization module, is not yet supported. The best you can do is change the system font size.

Click on any image of this gallery to view other aspects of the Control Center. 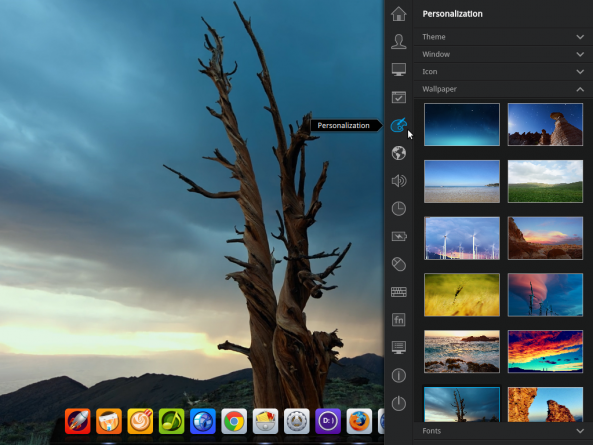 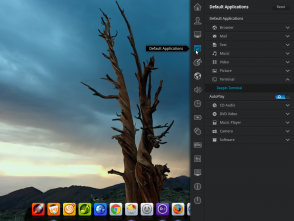 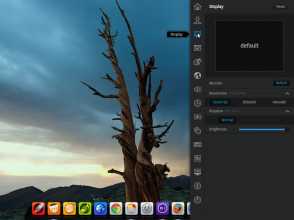 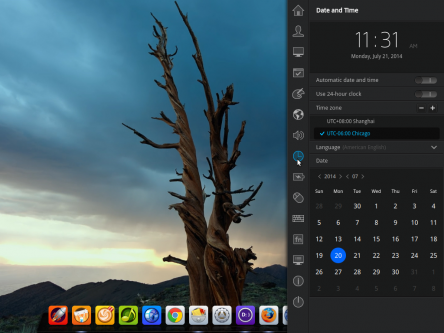 Date and time configuration from the Deepin 2014 Control Center 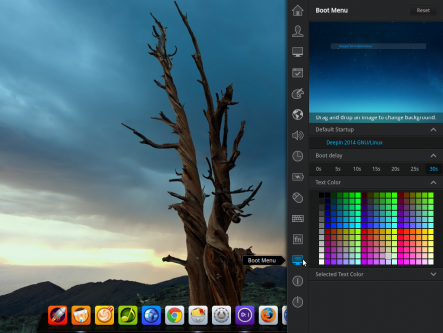 As much as I like Deepin Desktop Environment 2.0 and the components that make it, in my opinion, the most beautiful desktop design available to the Free Software community, there are, as with the installer, rough edges. And that shouldn’t come as a surprise considering that this version is the first version of the new design. Some of the problems that have been reported are: Occasional freezing of the desktop; issues with Nvidia drivers; an inability to configure Bluetooth devices from the Control Center; and issues when coming out of Suspend mode.

I don’t have any Bluetooth devices, so I can’t comment on that aspect, but on my test installation on real hardware, the system has been running smoothly. And it is very responsive. But that may be due to the fact that I’m using the integrated Intel graphics. The only test installation where I’ve experienced freezing of the desktop is the one in VirtualBox. But that does not bother me because the lead developer has advised against installing Deepin 2014 in a virtual environment. They are not supposed to be compatible. On the issue with Suspend mode, that has, so far, not being a problem with my test system, whether putting it in that mode manually or automatically via one of the power saving settings.

Out of the box, Google Chrome (Chromium) 35 is the installed Web browser and LibreOffice 4.2.4 is the installed Office suite. Firefox 35 and the 32-bit version of KingSoft Office are available for installation. Aside from those well-know applications, there are a few custom applications from the developers of Deepin. They are: Deepin Games, Deepin Music, Deepin Movie, Deepin Screenshot, Deepin Terminal and, of course, Deepin Store.

Deepin Terminal is my favorite of the bunch. One reason is that it’s the only terminal application that I can use without customization, other than changing the font size; my eyes love the default text and background color and opacity. I especially like the fact that I can split the screen any which way I want. 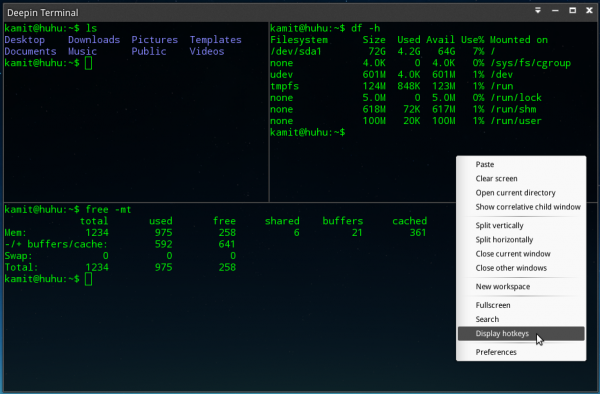 Aside from split screens, Deepin Terminal also offers workspaces, or tabs. The design is really cool. If only the developers will borrow a few ideas from Final Term. One application that you’re most likely to have problems with is Deepin Store. And that would be because of extremely slow download speeds during application updates/upgrades or installation. But there’s an easy fix for that. See Dealing with slow package download speeds on Deepin 2014. 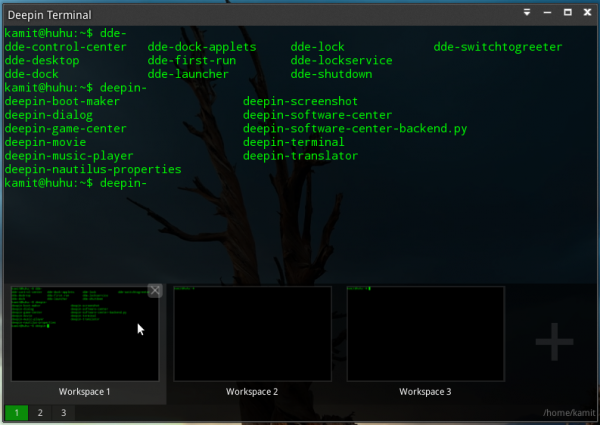 Physical and Network Security: Because the installer lacks support for full-disk and home-folder encryption, Deepin 2014 does not offer any physical security features. For network security, a firewall application (UFW) is what you get. But even that is not configured. I personally prefer FirewallD because it has support for network zones, the graphical interface is more powerful and it comes with an applet. The problem with using the applet on Deepin 2014 is that there’s no way to add it to the list of startup applications. It’s either that or I’ve not figured out how to add it. See Managing startup applications on Deepin 2014.

To sum, it’s no secret that I like Deepin 2014. But what’s not to like about something that’s good and has the potential to be even better. There are features (on the installer) that need to be implemented and several rough edges on the desktop that calls for more polishing, but in general, this is one desktop distribution that I think you should, at least, take for a test drive.

Resources: Care to see first-hand what Deepin 2014 looks and feels like? Installation images are available for download linuxdeepin.com/download.en.html. Most of the chatter on the official Deepin forum is in Chinese, but there’s an official subforum for English speakers. Alternatively, you may start any Deepin-related discussion at the Forum @ LinuxBSDos.com.