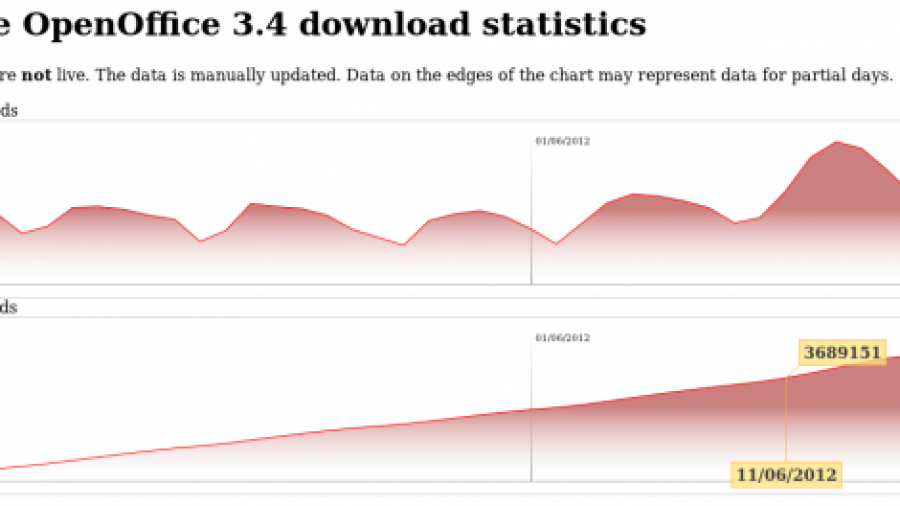 Apache 3.4 was released just six weeks ago. Since that time, download rate has been brisk. That is relative, of course, but for a software that is no longer installed by default on Linux distributions, surpassing the 5 million download mark in six weeks is still impressive.

If you just dropped in from outer space, Apache OpenOffice, or what used to be called OpenOffice.org, was a Sun Microsystems-sponsored project. It was at one time, the most popular office suite, as it was pre-installed on almost all Linux and BSD desktop distributions. Then, something happened. And that “something” was the acquisition of Sun Microsystems, Inc. by Oracle Corporation.

Oracle’s history of not caring too much about Free Software led several contributors to fork OpenOffice.org. That forked, called LibreOffice, is now the default office productivity suite on almost all Linux distributions. Oracle eventually donated OpenOffice.org to the Apache Software Foundation (ASF), which changed the name to Apache OpenOffice.

Apache OpenOffice 3.4.0 was the first version released since it became an ASF incubating project. That was six weeks ago. May 8 to be exact. The image below shows the daily and monthly download stats since that date.

Coding is ongoing for version 3.4.1, which is scheduled for release at the end of July. From the announcement:

In parallel with the 3.4.1 maintenance branch we’re also working on discussing how best to use the Symphony contribution from IBM. This code has many bug fixes and UI enhancements that could benefit OpenOffice users. Some of the bug fixes from Symphony have already made it into the 3.4.1 branch.

For post-3.4.1, we are weighing two options: a slower, incremental merge of Symphony enhancements into OpenOffice, or more rapid rebasing of OpenOffice on top of Symphony. Each option has its advantages and disadvantages, as well its supporters.