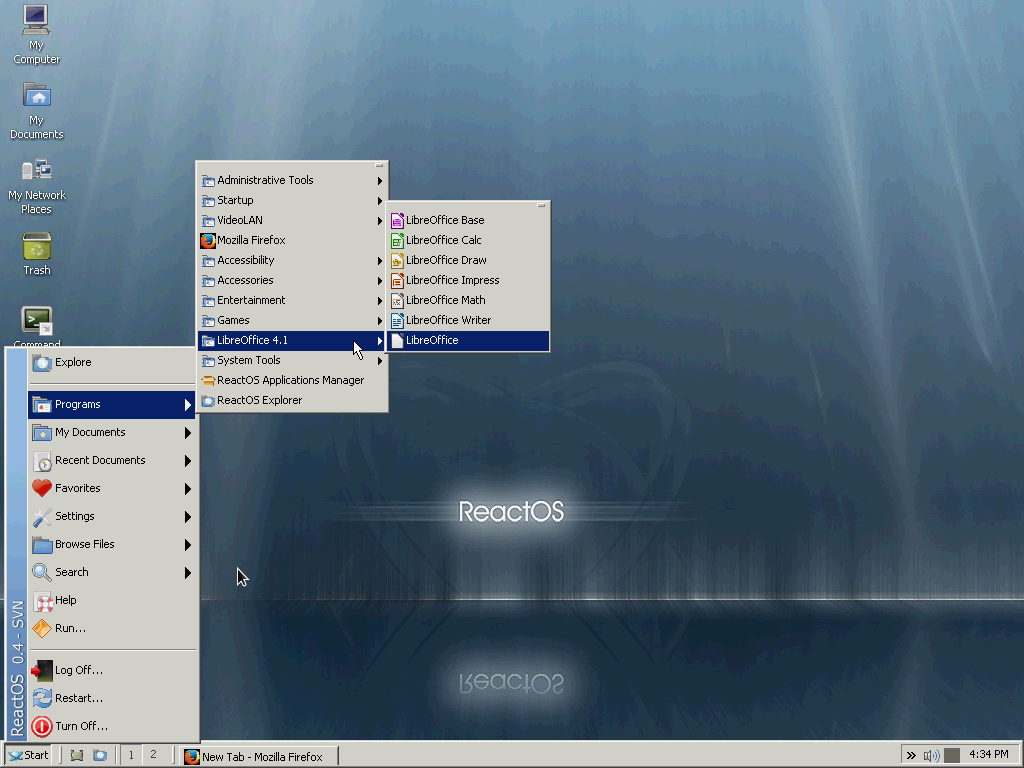 ReactOS is an Open Source operating system designed to be binary-compatible with Microsoft Windows operating systems built atop the Windows NT technology, like Windows XP, Windows 7 and Windows Server 2012.

Code and design-wise, that means the core has nothing to do with Linux or other Unix-like operating systems. But this is a project I think has a bright future and the potential to play a very important role in the Free Software/Open Source community.

For those who for one reason or the other must use a Microsoft operating system, imagine what it would mean to be able to run their favorite Windows applications on a Windows-compatible operating system that does not have all the govt-sponsored backdoors of the original. Assuming the group I’m referring to really care about privacy, I think it would be a major development.

So what does this ReactOS look and feel and function like?

To answer that question is the reason I downloaded the latest alpha release for a test drive. The following report is my experience with it. Note that this was never intended to be anything but a cursory review of an alpha release of an operating system, so don’t expect more than that.

The ReactOS installer: Even though I don’t use a Microsoft Windows operating system, I’ve been doing a bunch of test installations of Windows 7 and 8 for sometime, so I have some familiarity with the Windows installer. At this stage in its development, the ReactOS installer is not as polished as the original, but it gets the job done. The installation process is a 2-stage affair. The screenshot below shows the first step of the first stage. It’s the Language Selection step. All the steps in the first stage are not mouse-friendly, so navigation is via the keyboard. 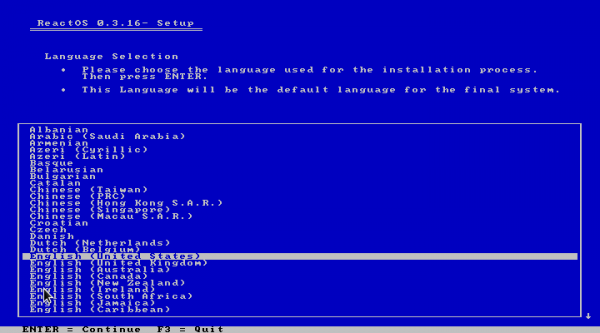 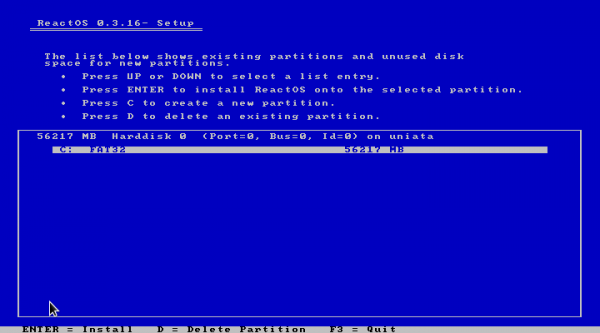 The filesystem selection step. Just FAT32 and Ext2. No NTFS. 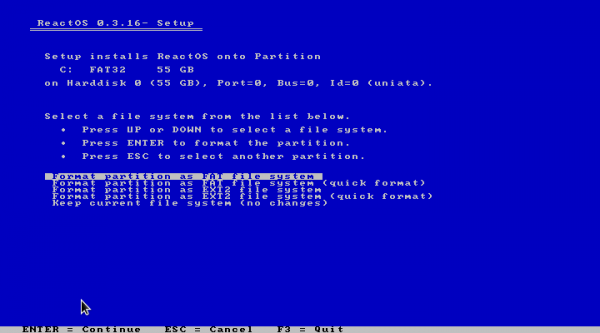 At the bootloader selection step, you get to choose where to install the boot loader. The installer of the original operating system doesn’t give you that option. 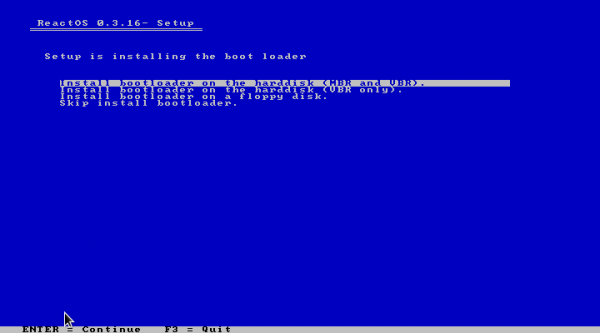 And this is the boot menu. It heralds the start of the second stage of the installation process. 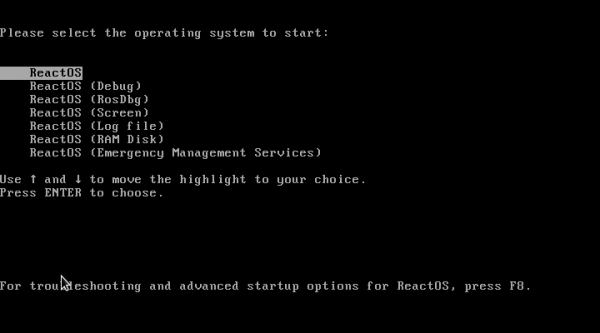 The second stage is where you may use a mouse for navigation. 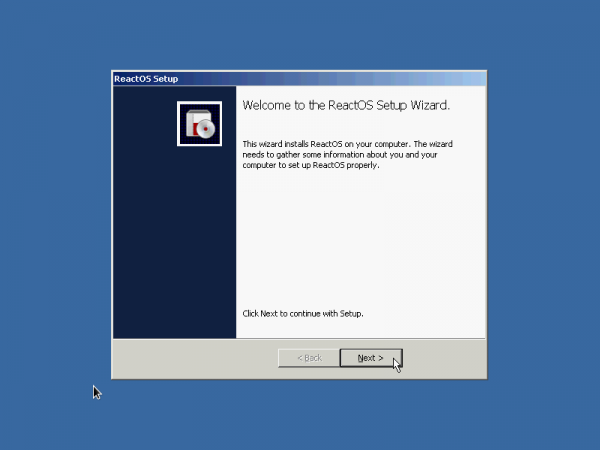 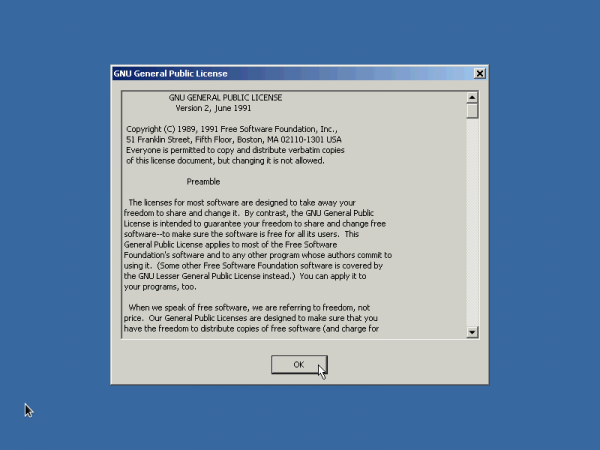 You have the option to specify the administrator password, just as on older editions of Windows. 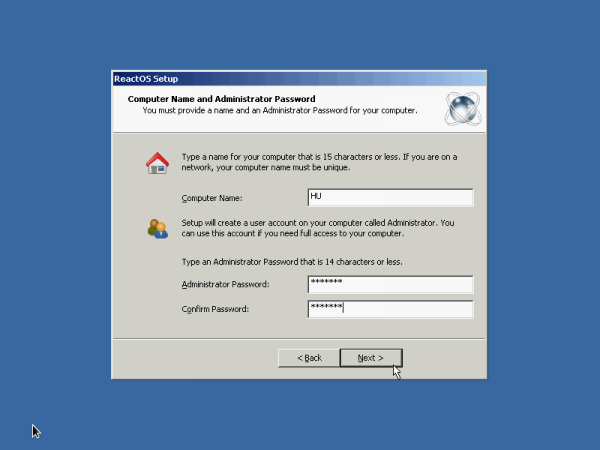 So that’s the installer. It works really well – for what it’s designed to do. I made two installation attempts in a virtual environment and never had one problem with it. I give it good grades. What about the desktop itself?

The ReactOS Desktop: This is where ReactOS betrayed the fact that it is still far from being ready for prime time. I didn’t bother to keep count of how many times something crashed. But crashes aside, which were expected, the desktop does look good. It even comes with two workspaces or virtual desktops by default. I don’t think I ever saw something like that on any version of Windows. 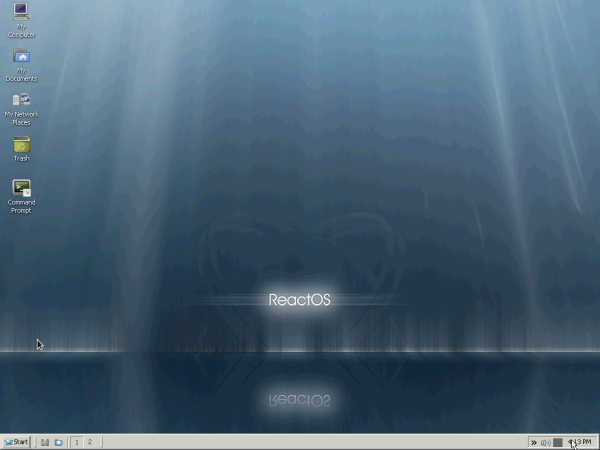 They even managed to make the menu look just like the original. 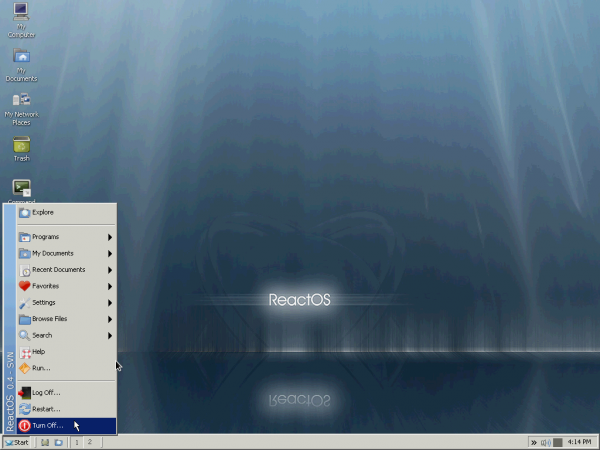 Another screenshot of the desktop showing some of the installed applications 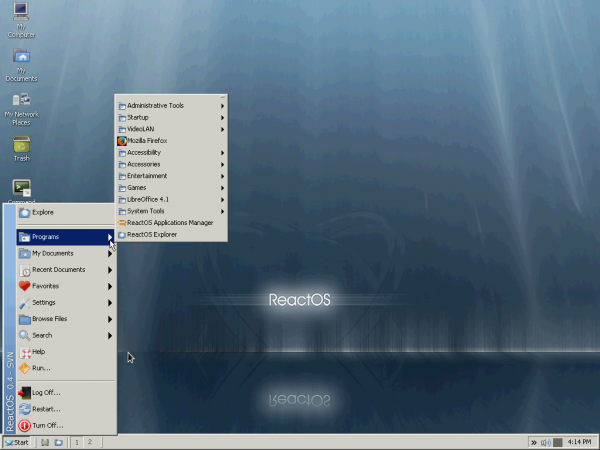 This one shows the suite of LibreOffice components. ReactOS does not ship with LibreOffice installed. This was taken after I had installed it. 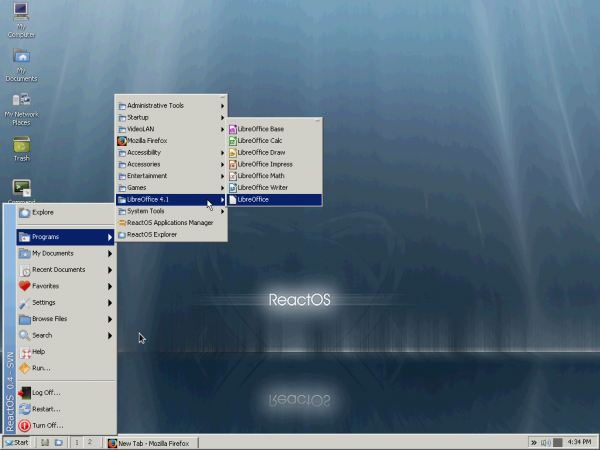 Talking about installing applications, the ReaactOS App Manager is just like your favorite Linux distribution’s graphical package manager from about 10 years back, though it does not have as many applications available for installation. 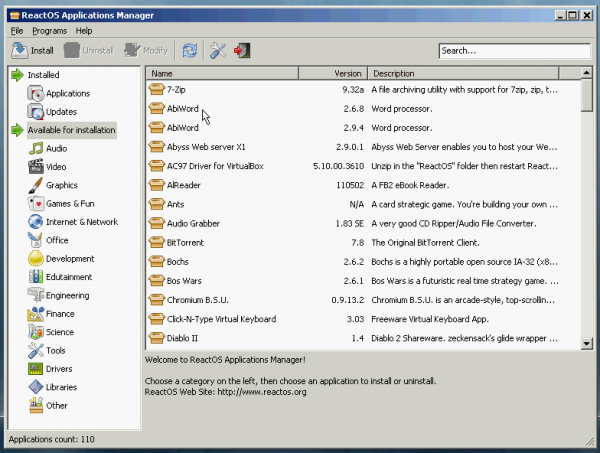 It does have about three dozen games, including a Steam client available for installation. 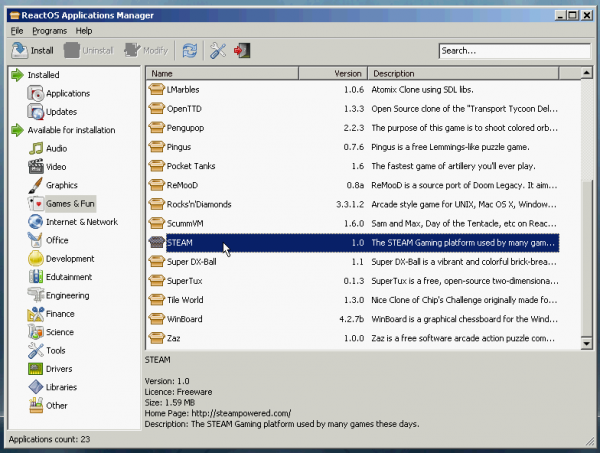 And several versions of Firefox are available, including Firefox 26, which until a few days ago, was the latest, stable edition of the popular Web browser available for download. 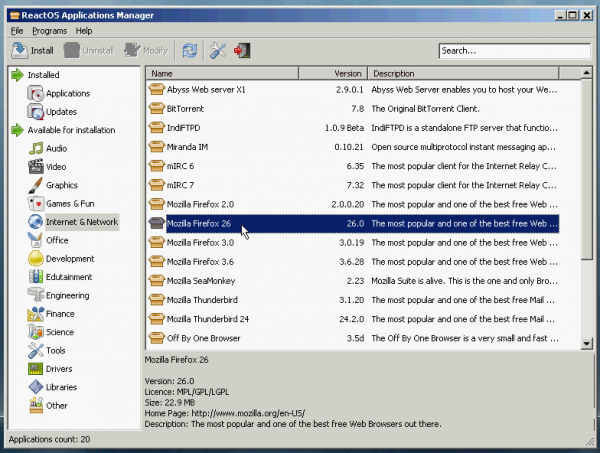 After installing Firefox 26, I could never keep it from crashing, which it did at every turn. 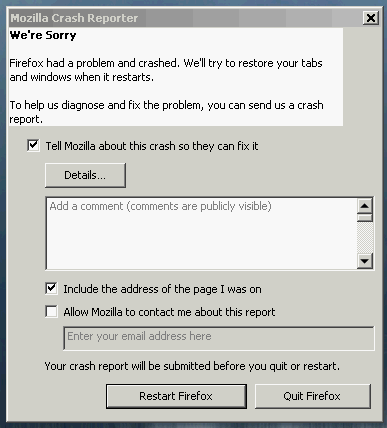 Even LibreOffice joined in the crash party.

And, no, repairing or reinstalling LibreOffice did not help. At least in the case of Firefox, I could restart it anytime it crashed. 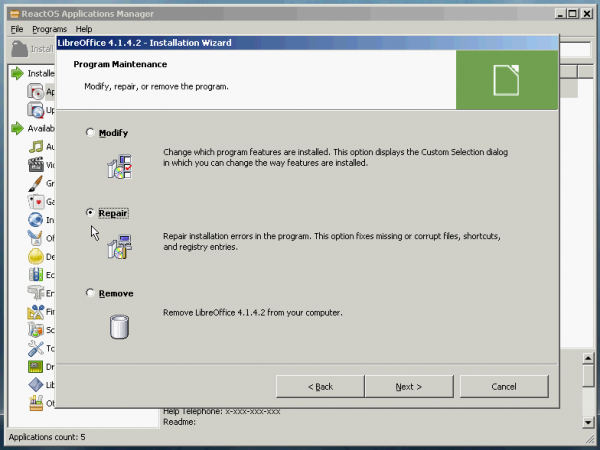 Even the operating itself joined in the crash. Is this the infamous blue screen of death? The crashes were expected, so I was not rally bothered by them, knowing the developmental stage the product is in. 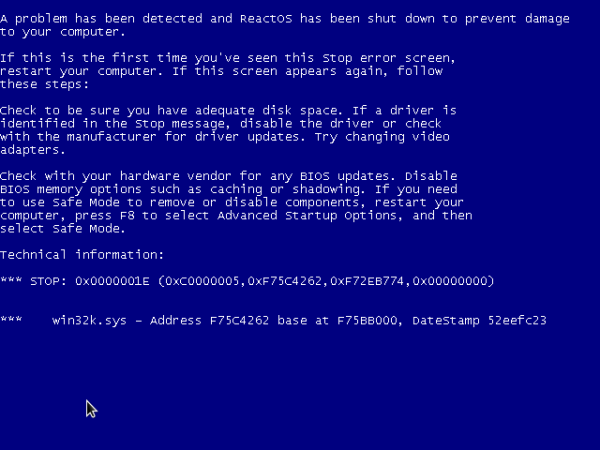 To sum, ReactOS appears to be a serious project, with a coordinated group behind it. Aleksey Bragin, the lead developer, is a Russian and their is a Russian ReactOS Foundation. There’s even a German non-profit organization called ReactOS Deutschland e.V. supporting the project. I think given enough effort and support, ReactOS could be in a usable state by the end of this year. I’m rooting for its developers, because I know that there’s room for ReactOS in the world of operating systems.

Resources: More information about ReactOS is available at the project’s home page. Installation images of ReactOS 0.3.16 are available for download from here.

This is a very interesting project. I have been following this for years and I’m waiting to see a fully working Windows compatible OS. I wish the project had bigger sponsors, so it would get more publicity.

Last time I tried ReactOS, it would not close any windows upon double-clicking the control boxes. All MS Windows versions will close a window when double-clicked in the upper left corner. It’s a major flaw. Did they fix it yet?

The only part of a window that responds to a double-click in the titlebar. And it maximizes on that mouse action.

>>Even LibreOffice joined in the crash party.
I assume you have to install the ‘Microsoft Visual C++ 2010 Redistributable Package’ from the ‘Application Manager’, since the error claims a file from this package is missing.
Usally a installer should make sure that the runtime is installed, but this doesn’t seems to be the case.

Yep, an installer should take care of all dependencies.

Review? What review? It must have gotten lost somewhere among all the pictures.

Welcome to a world where a picture is worth more than a thousand words.

Btw, here’s a sentence from the 6th paragraph:

Note that this was never intended to be anything but a cursory review of an alpha release of an operating system, so don’t expect more than that.

And how do you offer a detailed review of something that keeps crashing at every turn?

I have not tried,to play with Reactos on the Mac.
I was only courious if Reactos is bether than wine or crossover office.
In my opinion i could see Reactos as an opensource Windows equivalent,so it is.
I’m statisfied on my mac’s with Osx Maverics at the moment.
There the Mac’s are made for to run their own OSX.
So only i use Cross overoffice for some Windows programms who are not available on te Mac.
These programm’s are working great.
So i do not need Bootcamp to install also a full windows version on my Mac.

Thanks for the preview. I’ve been interested in the project since I heard of it a few years ago, although I never tried to play with it given how it seems to be stuck in early development. The one thing about the project that seems a bit odd to me is that they seem to be doing things the hard way by using Wine to help build an entire OS from scratch.

Wouldn’t it seem like using Wine and established platform like Linux or BSD would be a quicker way to to clone Windows? I would think that it would be far easier to use an established kernel & what ever other bits could be reused, and then to use Wine & whatever new programing you could come up with to make your clone act exatly like windows. I could easily be wrong, but it does seem to me that ReactOS is doing things the hard way. Does anyone know why they wouldn’t lean more on other opensource projects?

ReactOs aims to be binary compatible, even for drivers.
If they whould use a Linux kenel, then this wouldn’t be possible.
Also there is a branch witch uses more Wine Code, Arwinss.

Like J said, ReactOS has been around for quite sometime. You have to give the developers some credit, they’ve gotten quite far. However, this project will never see a stable release. Never. It kinda reminds me of “Lindows”, remember that? Just too much to accomplish reverse engineering an outdated OS.

Lindows was never meant to be any more compatible than any other Linux distro could be made to be. It just attempted to be more accessible to those used to Windows by pre-configuring its UI to look similar, including WINE pre-installed, and having the codecs required to play certain popular media types like MP3s already installed “out of the box” (something which advocates of *truly* free open source software strongly condemned).

ReactOS attempts to be *much* more thoroughly compatible, but the glacial-speed progress has been a major disappointment. It’s REALLY missing an opportunity to become a major player by not being ready to replace the XP still running on hundreds of millions of PCs now that Microsoft is finally dropping support for it next month.

I’m currently sitting here, watching a Windows 8 machine “reset” to factory settings. It started at 4pm. It is now midnight. It is on 45%.

Suffice it to say, I’m really rooting for reactos. I remember using it a year or two ago, and it was good, certainly not primetime, but I liked what they were doing. It sounds like it’s still not primetime (it actually sounds more buggy than when I tried it, but that’ll either be bugs in my memory, or because it is more binary compatible now than it used to be, and they were depending a lot more on interfaces to GPL’d software to make things more seamless.)

Either way, with this kickstarter, I’m encouraged. I want to be able to install this on people’s machines and watch the computers scream with the kind of performance that only comes from a bloatware-free OS, while still allowing them to install Steam games, or Sage, or (heaven forbid) micro$oft office.

I am encouraged. I tried Reactos a few years ago, it has come a long way. When will it be ready? I don’t really know, but trying to build a new OS from the ground up, while older OS’s are still forging forward is not an easy thing to do. Kudos for getting any OS to run exe. programs in open source.

Definitely my distro of choice , especially love ReactOS more when i see BSOD.

“ReactOS could be in a usable state by the end of this year.” Hmmm, I seem to recall having heard some say something like this back in 2005 or so, if memory serves.

Hi,there I have a interesting question.
I’m using two Mac’s with OSX Maverics.
I would just ask if it’s possible to install reactos with bootcamp,because React os is possibly bether than Wine,or Crossover office to run windows programm’s on.
This if you still not want to buy Windows,if you will run some windows programm’s on a Mac?.
Thanks for the answare in advance.

Since Bootcamp will appear just like Windows 7, I think it’s possible, but at this stage, I would want to rely on ReactOS for serious computing.

That said, you can always play with it to see how well it works. Let me know what happened if you do.

I dont know how wine is on mac, but WINE 1.7 on linux looks much better than reactos.
WINE is fully able to install firefox/win32, what reactos seems not able.