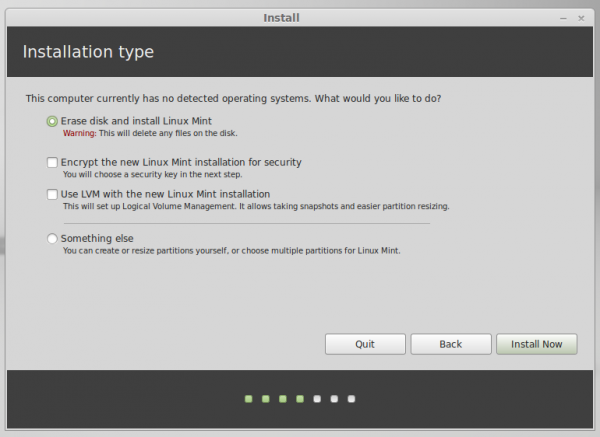 Security Posture: With full disk encryption and user account (home folder) encryption supported during the installation process, Linux Mint has almost all you need to provide top-notch physical security for your computer. The only missing feature is boot loader password protection. If you can apply the “nuclear option” (nuke) patch to LUKS cryptsetup that was just released and integrated into the latest edition of Kali Linux, it gets even better. (See A Kali Linux cryptsetup patch that can “nuke” an encrypted disk.)

Regarding network security, the firewall application called the Uncomplicated Firewall (ufw) is installed, but not enabled. Though network security goes beyond just enabling a firewall, it makes a difference, especially on an OS of this sort, to have a firewall enabled by default. Not everybody agrees with this stance, but I’m yet to have someone offer a good argument why having a firewall enabled by default is a bad idea.

There is a graphical interface to ufw that’s in the repository, but not installed on the Cinnamon and MATE editions. On the KDE edition, a firewall module for System Settings is installed, but not enabled. This screen shot shows it main interface in the default state. Aside from ufw, a better firewall application called FirewallD is in the repository. It’s what I have protecting a laptop running Linux Mint 15 Cinnamon. I’ve not installed it on any edition of Linux Mint 16, but I’m sure there should be no problem doing that. See How to replace Ufw with Firewalld in Linux Mint 15 if you want to see how to install it on your copy of Linux Mint 16. 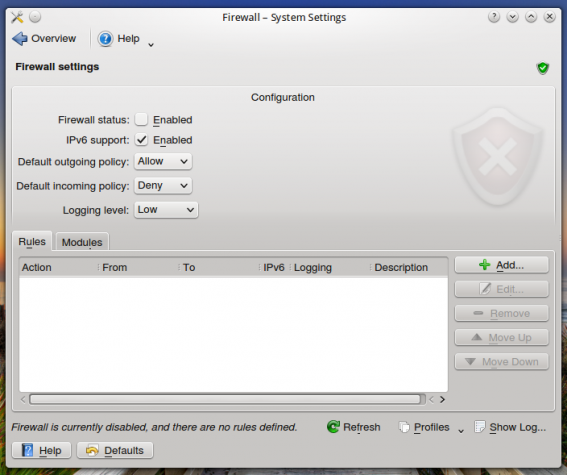 Games: Another feature all editions of Linux Mint (16) have in common, is the absence of games in the default installations. Not even a simple card game is installed. It’s almost as if the distribution’s developers have something against games. I’m sure that’s not the case, but… In any case, there are lots of games in the repository that can be installed using any one of the installed graphical package managers or from the command line.

They Just Work: For new users, and even for experienced users, the most important feature that all editions of Linux Mint 16 have in common is this: They just work. Just install a system and start being productive out of the gate. All the multimedia codecs you’ll need are installed. Connect a printer to the system and it’s configured automatically. You don’t even have to do anything. Just connect and print. That’s why the distribution is one of the most popular Linux desktop distributions in active development. It just works!

The Cinnamon Desktop: The Cinnamon desktop environment is a project started and maintained by the developers of Linux Mint, so you know you’ll always get the latest and greatest version here. For the record, the version you get is the Cinnamon 2.0.14. This desktop is a modern, anti-GNOME Shell desktop, designed to offer the same look and feel as older desktop environments like MATE, but built using modern technologies. It is currently built atop GNOME 3 technologies, but there are plans to go in a different direction in the future.

Cinnamon comes with a wide variety of graphical management utilities, so users rarely need to use the command line to accomplish any system management tasks. This screen shot shows the top section of the edition’s System Setting. 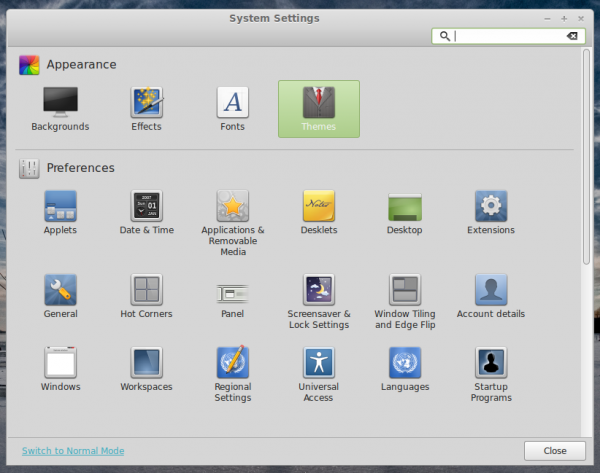 This is the other half of Cinnamon’s System Settings. 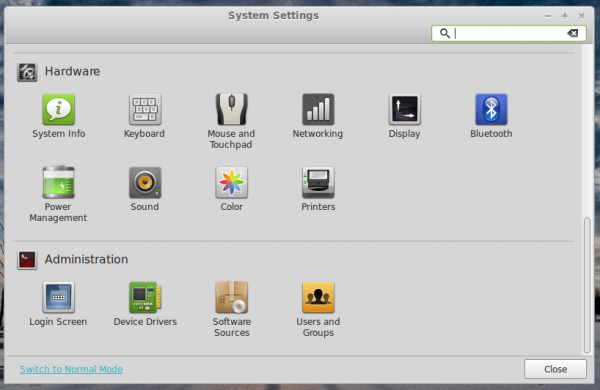 The six images in this gallery, all with detailed descriptions, show different aspects of the Cinnamon desktop on Linux Mint 16.

The Cinnamon desktop on Linux Mint 16 Cinnamon edition showing the panel calendar. By the way, that is not the default wallpaper.

The menu on Linux Mint 16 Cinnamon.

The menu on Linux Mint 16 Cinnamon showing the entries in the Office category. LibreOffice is the installed Office suite.

Using the search feature on the Cinnamon desktop of Linux Mint 16.

The Expo view on Linux Mint 16 Cinnamon. This view is activated from the Hot Corner located on the top-left of the desktop. Two workspaces are set by default, and you can add more by clicking on the button to the right of the screen.

The KDE Desktop: The KDE edition comes with KDE 4.11.2. Applying the latest updates bumps it to version 4.11.3. It uses the beautiful Oxymentary icon theme, which is almost as polished as the ROSA icon theme used on all editions of ROSA Desktop. Recommended disk space for the KDE desktop is 8.4 GB, though a new installation takes up just under 4.5 GB of disk space.

Like the Cinnamon desktop, KDE also has a control center that offers access to graphical applications that can be used for managing different aspects of the desktop. This screen shot shows a partial view of the applications. 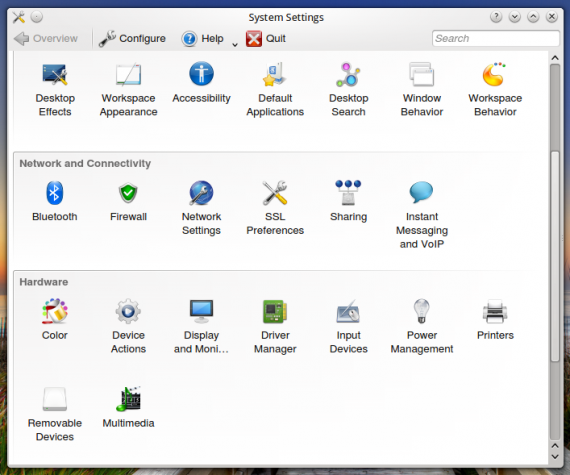 This gallery show aspects of the KDE desktop on Linux Mint 16. Click on any image to view it.

The default desktop of Linux Mint 16 KDE showing the panel calendar. That is not the default wallpaper.

The Lancelot menu is another style of menu available for the KDE desktop. It is similar to the menu style on the Cinnamon desktop.

Linux Mint 16 KDE desktop showing the Homerun menu, a fullscreen app launcher that is similar to the SimpleWelcome launcher of ROSA Desktop. 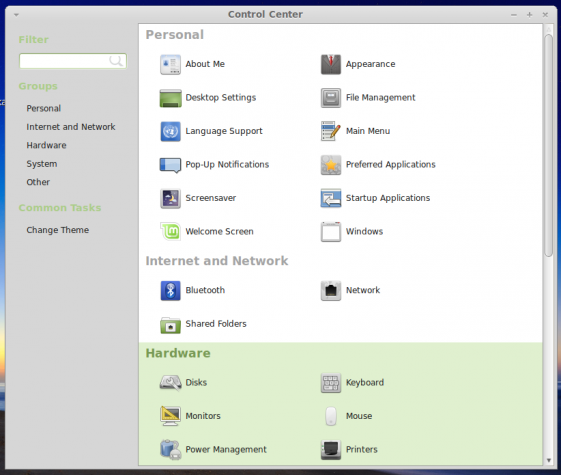 Click on any image in this gallery to view different aspects of the MATE desktop on Linux Mint 16.

Linux Mint MATE desktop showing the panel calendar. As with the screen shots in the KDE and Cinnamon desktops, this is not the default wallpaper.

Using the search feature of Linux Mint 16 MATE desktop. With mintInstall integrated, installation of applications can be started from the menu.

Linux Mint MATE desktop showing the Synaptic Package Manager. It is the other graphical package manager installed by default.

To sum, Linux Mint is one of those distributions that’s a joy to use and review. If you are new to Linux, this is one of the very best that we have and it gets better with each edition. If you want my opinion of which edition to use, you can’t go wrong with the Cinnamon edition. Regardless of the edition you use, just watch out for a crashing Software Manager.

Resources: You may download a 32- or 64-bit installation image of Linux Mint 16 Cinnamon, KDE and MATE editions from here. Though not featured in this review, there is also an Xfce edition which also available for download from that download page.

I started this journey with mate 15 when windows XP lost support mate revitalized a 9 year old machine it works great and on my other newer machine i now use the newer mate 17 for me mate was easer on the transition from xp to the Linux OS.

Good review … but yet another one where the reviewer doesn’t like the MATE desktop.

For those who don’t want fancy effects, it’s configurable, traditional, comfortable, and fairly lean (about the same as the less feature-rich XFCE and LXDE – yes, really)

Half a year ago I got really fed up with Windows and decided to give Linux a spin. I tried Fedora and after fiddling around with something impenetrable called Gnome for a while and getting nowhere I decided to install KDE. After jumping through hoops I finally got KDE to install and it was OK as a desktop, but the eternal fiddliness of Fedora, especially trying to install display drivers as well as other things that I just couldn’t get to work, very nearly made me give up on Linux forever.

Before I did give up I decided that as one last try I would take a look at this Linux Mint that I had read such good things about.

I have never looked back, Mint Cinnamon is now my OS of choice. It installed beautifully, it works perfectly with no fiddliness and is very easy for an ex-Windows user get used to. The perfect beginners Linux, and, I suspect, the perfect veterans Linux as well. It just does what an OS should do and it does it very well.

If any newbies ask about Linux you would be doing them a great disservice if you said anything other than “Mint 16 Petra.”

Agree. Cinnamon is the ideal desktop for users switching from Windows. It is simple, elegant and yet powerful. Only gripe is that applets / desklets need much more love. I am seeing progress there as well with lot of third party developers jumping and developing nifty tools.
http://cinnamon-spices.linuxmint.com/

I know that linux mint is a popular distribution.
Now and then I give it a try to see what’s all the fuss. Invariably I end up uninstalling mint.
Tried the Petra KDE version and once more it has been uninstalled. I find it is still rough around the edges when it comes to KDE…. I have tried other DE’s but I really enjoy KDE.
With Petra connecting my android phone to transfer files can only be done with dolphin, let me tell you this is quite a pain.
I’m sure there are hacks and incantations to be used, but I like the “just works” approach.
My distro of choice is still Opensuse KDE (13.1 as at todday)

Agree on the issue that Dolphin, by default, does not recognize Android devices. But you just need to install kio-mtp, no tricks involved.

I switched from KDE to Cinnamon and glad to say that I made the switch. it just works for me. (Am on Mint Box 2 PC)

hey i hv heard lot about mint box .. so how is the performance ???..
i have heard someone saying it heats up a lot.
is it true??

Can’t say for sure, since I’ve not used it and don’t intend to. You can buy a Chromebox, like ASUS Chromebox, and install Linux Mint on it.