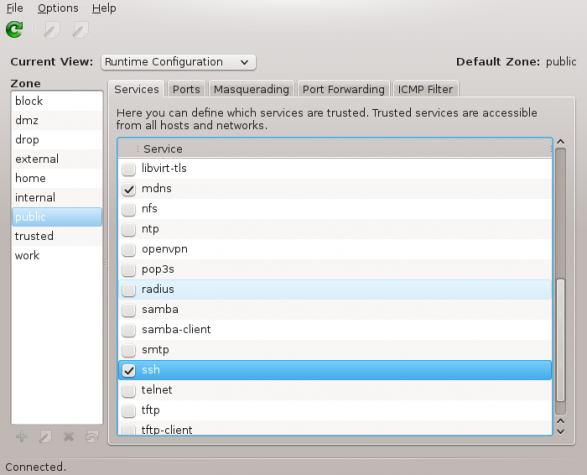 Why does it have to be fullscreen: Either using a Live or DVD installation image, you will eventually come to realize that the New Anaconda’s window is always fullscreen and it cannot be resized. Why? But that’s not all. Does it scale? Nope. This is a screen shot from an installation attempt with the screen resolution to 800×600. 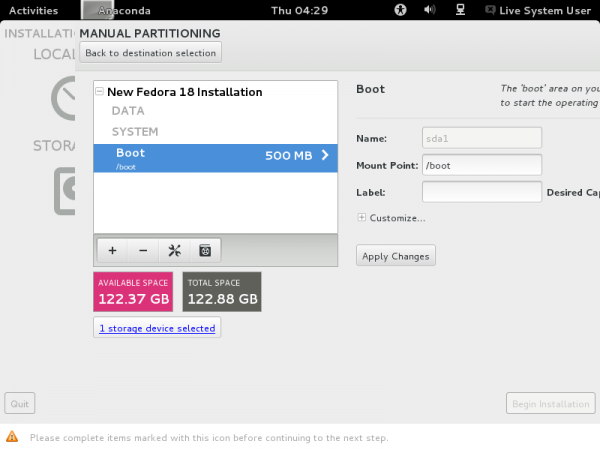 Why are buttons scattered everywhere?: Aside from being in fullscreen, the next thing that annoys me no end is the positioning of buttons. On the Old Anaconda (see the fifth image on the first page of this article), the buttons are sanely positioned. I can’t say that for the New Anaconda. 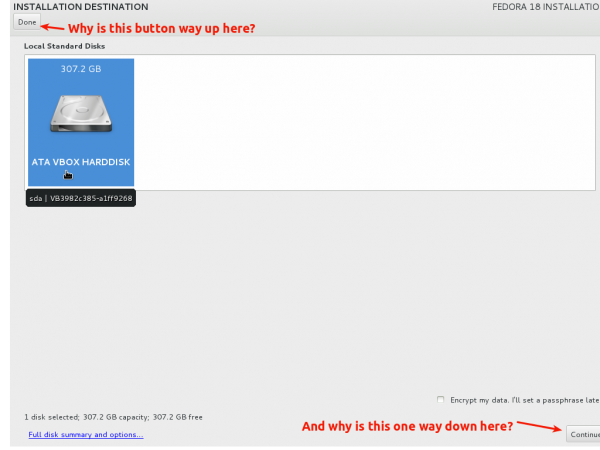 Hub-and-Spoke Inconsistency: This screen shot is that of the hub from a DVD installation image. 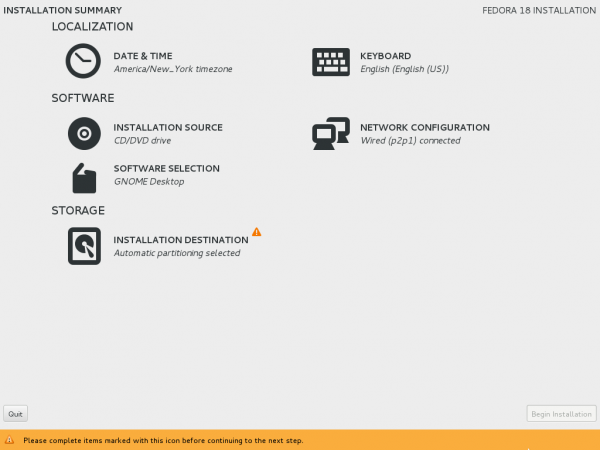 And this one is from a Live installation image. Understandably, the DVD hub has more spoke or modules that a Live image hub. 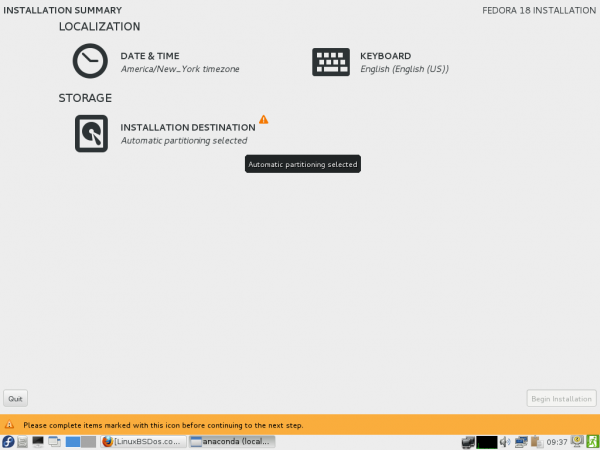 But why is the module for setting the password for the root account not part of the hub in either the Live or DVD installation image? 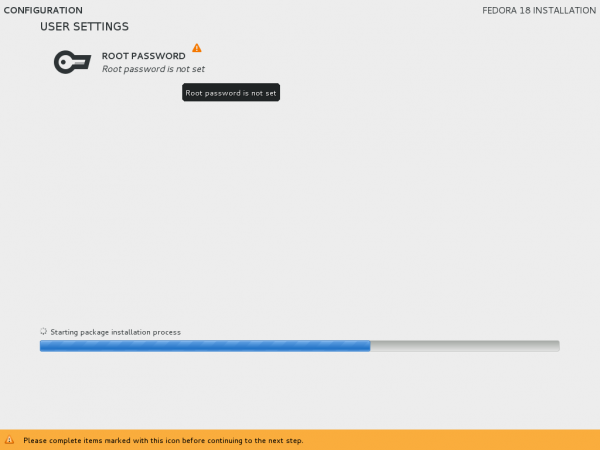 Is it sda or sdb?: A criticism I’ve read elsewhere about the New Anaconda is that if there are multiple hard drive shown on the Installation Destination step, and if they are of the same size and model, that it is impossible to tell which one is sda or sdb, etc. But that’s not true, because just mousing over the icons will bring up a tooltip that tells you if a disk is sda or sdb. 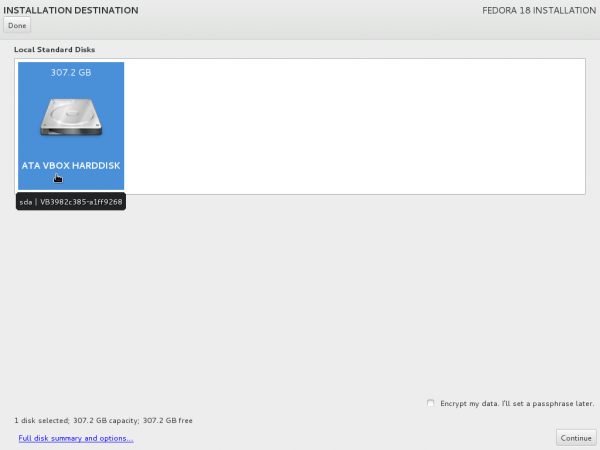 Here’s a screen shot from a system with two hard drives detected. 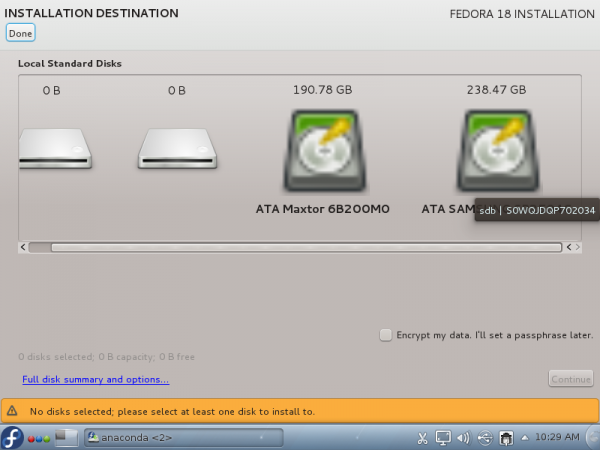 Reclaiming Disk Space: Automatically shrinking or resizing an existing partition in the Old Anaconda, like most tasks on that installer, is a very simple process. On the New Anaconda, it is a chore. As far as I know, it does not work. This is a screen shot of the window you get when a disk is selected for partitioning or resizing. It says that about 183 GB of disk space is unavailable but reclaimable. Clicking on Reclaim Space will take you to the Reclaim Disk Space window. 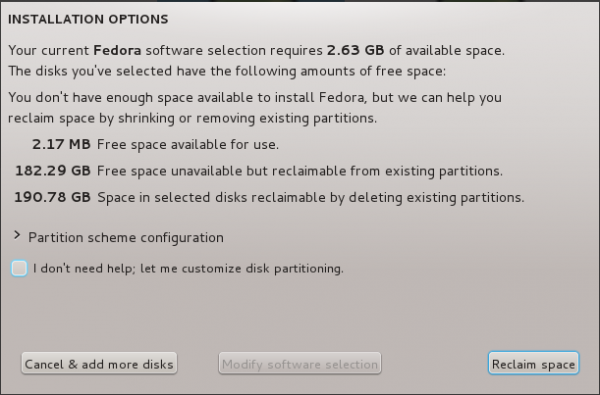 However, once in the Reclaim Disk Space window, I could not find how to reclaim the space automatically. The Reclaim space button is not clickable. 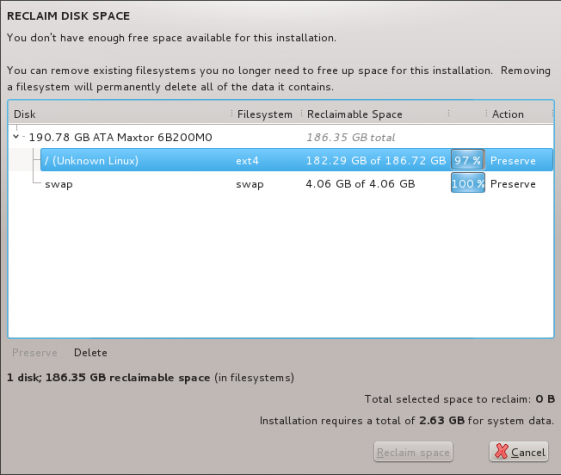 In an attempt to dual-boot Fedora 18 with a fresh installation (not OEM) of Windows 8 on a 200 GB hard drive, I found that the only way I could shrink the Windows 8 partition is manually. The manual method is actually very easy, just as easy as on the Old Anaconda. But what happened to automatic reclamation of disk space? You may read the results of my effort at How to dual-boot Fedora 18 and Windows 8 on 1 HDD, with GRUB in a PBR.

What about the boot loader: In the Old Anaconda, you had full control over where the boot loader is installed. Not so in the New Anaconda, I could not find any option in the Hub or a Spoke that let me decide where to install GRUB 2, the boot loader. In fact, the only option I found relating to the boot loader, whether using a Live or DVD image, is shown in the image below. The Set as Boot Device button is just for that, nothing else.

Which leaves me with this question: What do I do if I want to dual-boot with another OS, like Windows, and I want to install the boot loader in a Partition Boot Record (PBR), instead of in the Master boot Record (MBR)? It’s pretty obvious that from the New Anaconda, there is nothing that can be done. GRUB must be installed in the MBR. Fortunately, there is a backdoor method of installing the boot loader in a PBR. You can read about it here. 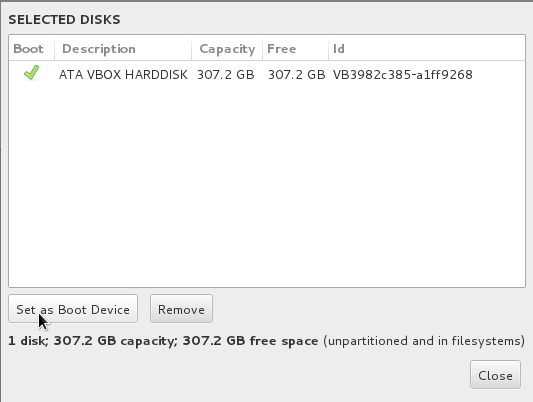 Why FORCE me to choose a strong passphrase: It’s true that I’m very paranoid when it comes to security matters, but when installing a test system, I don’t want to use an NSA-grade passphrase. It’s not necessary. Matter of fact, in the Old Anaconda, the encryption passphrase on my test systems is usually a simple word.

A 4-character passphrase is still considered weak. You can’t go past this window without setting a strong one. But that does the installer considers a strong passphrase?

The only way to find out is if you mouseover that stop sign. So, the passphrase needs to be at least 8-characters long. Nice to know!

Hey, this passphrase is longer than 8-characters. What’s the problem?

The problem is, it has to be a combination of numbers, letter and special characters. It sure would have been nice if that was written somewhere on this window. There certainly is enough space to put that information here.

Physical Security: Despite all the negative reviews it has earned, a that remains a core part of Anaconda is the ability to encrypt the target disk. And not just the whole disk, but you can pick and choose the partitions you’d like to encrypt. Unfortunately, the ability to password=protect the boot loader was lost, just like the ability to choose the boot loader’s location. Setting up a password for GRUB Legacy after installation is fairly easy. I’ve done it several times. (See How to password-protect GRUB.) I just haven’t done it with GRUB 2. I’ll give it a shot early next week.

It’s still Fedora: Whether you install the main edition of Fedora 18, which uses the GNOME 3 desktop environment, the KDE Spin or any other Spin, you still get a desktop that needs third-party repositories to get it to the point where it just works. It’s not a difficult process, you just have to know what to do. There is a tutorial written for Fedora 17, which is also valid for Fedora 18.

And this is what people don’t seem to realize about Fedora 18. A fresh installation still presents the same challenges and features as previous editions. But the negative reviews that it has gotten, simply because of Anaconda, has created the impression that it is the worst Fedora release ever.

When evaluated just on the installer, I’ll tend to agree, but does anybody remember what Fedora 8 was like? One more question for anybody from the Fedora team. Why didn’t somebody on the design team raise a russian flag about the mess that is the New Anaconda’s UI?

Resources: Aside from the default edition, which uses the GNOME 3 desktop, there are other editions of Fedora 18, called Spins, that supports other desktop environments. All all available for download here. For information on FirewallD, go here. For FedUp, visit https://fedoraproject.org/wiki/FedUp. Want to read about Anaconda, visit here.