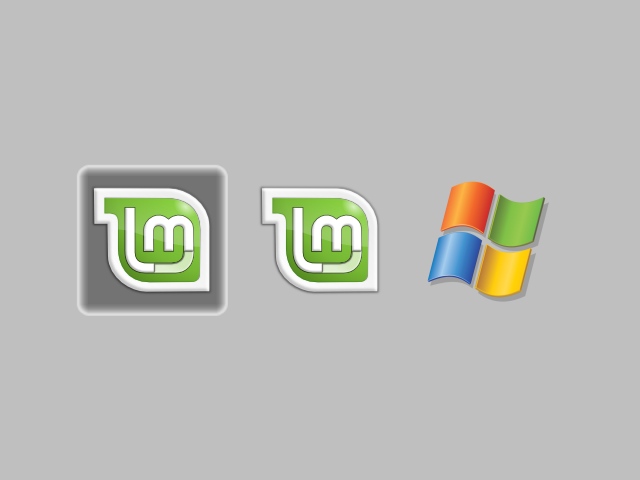 This is the main window of the Advanced partitioning tool. You should see the two Windows 7 partitions and the free space. The task here is to create partitions from the free space for installing Linux Mint. To start, select the free space and click Add. Note that this step will have to be repeated for all the partitions you will configure. 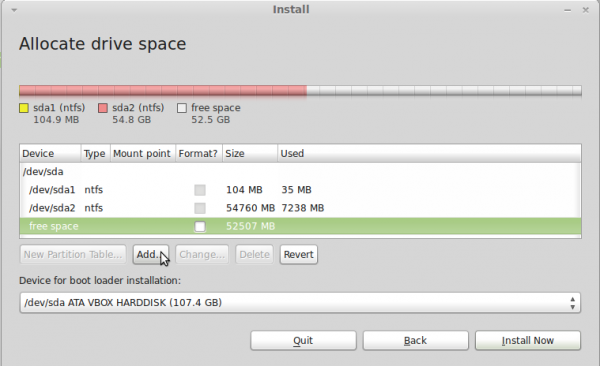 On a default installation of Linux Mint 11, only two partitions are configured – /, the main file system directory, akin to Windows’ C drive, and Swap, disk space that the computer may use as virtual memory. However, when creating partitions manually, four partitions for the following file systems are recommended:

A separate partition for /home makes life a bit easier when upgrading.

The first partition should be for /boot. With two existing primary partitions on the disk, the installer will, by default, configure all the partitions as logical partitions. And that is just fine. For size, about 200 MB should be enough, and the file system can be ext2 or ext4. By default, it is ext4. If you do not like the idea of using a journaling file system on /boot, use ext2. OK. 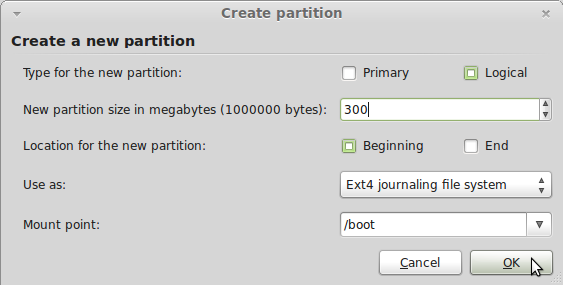 The second partition will be for Swap. About 2 GB or more is recommended. Select “swap area” from the “Use as” dropdown menu, then click OK. 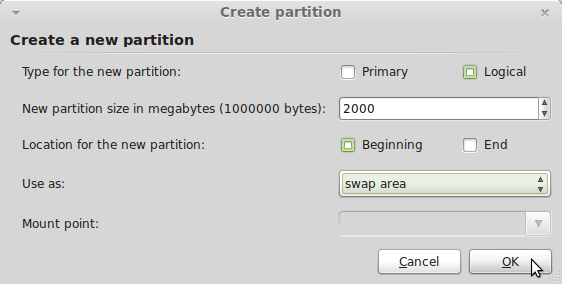 The third partition will be for the root file system, mounted at /. Linux Mint’s installer recommends a minimum of 4.7 GB for installation, but on a newly installed system, only about 2.7 GB of the space assigned to / is used. Depending on the amount of free space you have available, a value between the recommended minimum and 10 GB should be enough. The default file system is ext4. Btrfs, a new file system, is also supported, but using btrfs requires a slightly different disk partitioning scheme. (See how to install Linux Mint 11 on a btrfs file system.) 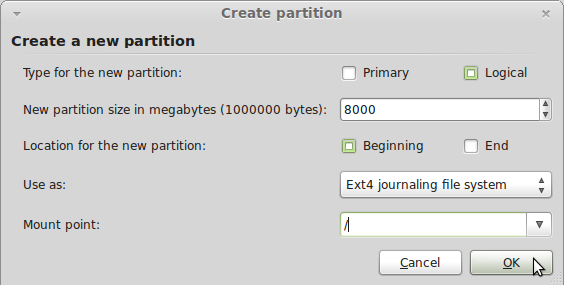 And finally, partition four will be mounted at /home. The file system will be the default, no point mixing partitions. The size you allocate will depend on the amount available, and whether you intend to install another operating system on the disk. For this tutorial, the rest of the available space is assigned to /home. OK. 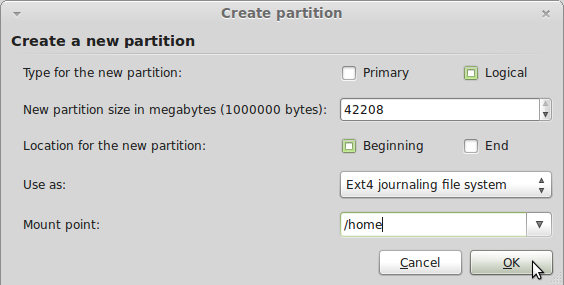 Back to the main window of the advanced partitioning tool. The newly configured partitions are listed below the ntfs (Windows 7) partitions. Before clicking Install Now, you must decide where you want to install GRUB, the boot loader. If you do not specify otherwise, the default location is in the Master Boot Record (MBR) of the disk. The other possible location is in the boot partition (/dev/sda5) of the Linux Mint installation. A good case can be made for or against both locations.

If you stick with the default location, GRUB will overwrite Windows 7’s boot loader. An advantage of installing GRUB in the MBR is that you do not have to do anything else. After installation, reboot, and you will be given the option of booting into Linux Mint 11 (the default), or Windows 7.

A disadvantage is that if you have to reinstall Windows 7 for any reason, it will overwrite GRUB, which means you will have a small mess on your hands. Windows 7 has also been known to write some files to the MBR during an upgrade or Service Pack installation. Some Anti-virus programs have also been know to write small files to the MBR, and if Windows 7’s boot loader is not there, GRUB will be messed up.

Installing GRUB in the boot partition is recommended if you do not want to deal with Windows 7 messing with GRUB. However, that too has to be considered carefully because dual-booting has been known to fail (that is, Linux has failed to boot), if the boot partition is close to the 1 TB mark on, say, a 2 TB disk. In such a situation, you may have to locate the boot partition closer to the beginning of the disk. It is not a straight-forward process, but it can be done, It has been done. (See the comments by Siva in how to dual-boot Fedora 14 and windows 7.)

A smaller issue involved with installing GRUB to the boot partition is that the computer will reboot into Windows 7 instead of into Linux Mint 11 after installation. It just means that you will have to add an entry for Linux Mint in Windows 7’s boot menu.

For an installation on a relatively small hard disk, installing GRUB to the boot partition should not give any problems. 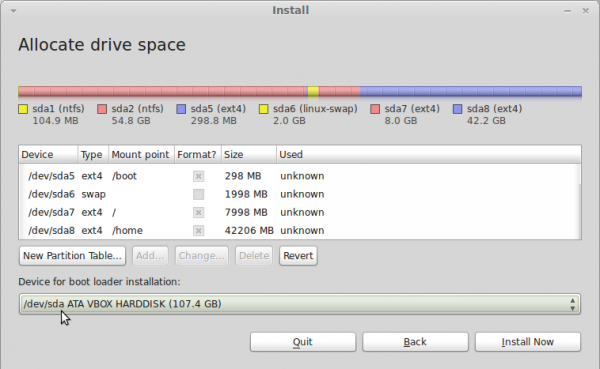 Therefore, the best option is to change the “Device for boot loader location” to /dev/sda5, the partition mounted at /boot. Click Install Now. 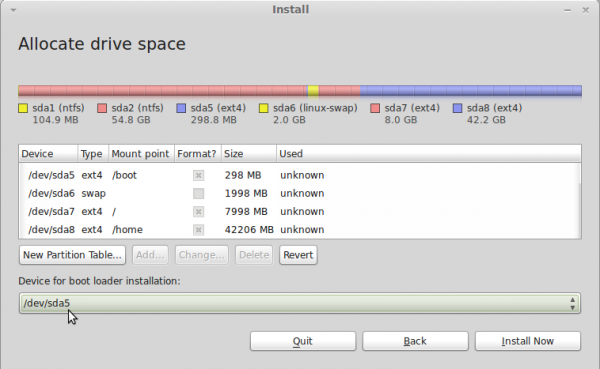