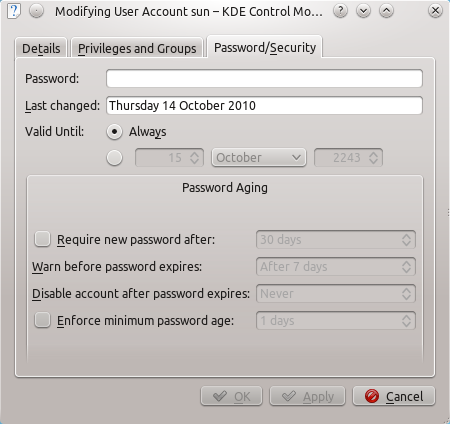 Media and Hardware Detection: CUPS, the printing system, is installed and running and my test HP Deskjet F4280 All-in-One printer was auto configured.

The image below shows the options presented by the system for handling a DVD video. Dragon Player is the sole DVD playback application in the list, but because libdvdcss is not installed, it is unable to play encrypted DVD videos.

If the system detects a DVD video that it cannot handle, you will be shown a list of applications not installed on the system that it thinks can help with playback of the video. Even after installing all the suggested applications, playback of encrypted DVD videos was still not possible. To enable playback of such videos, you will have to install libdvdcss by running sudo /usr/share/doc/libdvdread4/install-css.sh from a shell terminal.

The shot shows the options available when an audio CD is inserted. The only audio player in the list is Amarok. From my personal experience, I find Amarok to be too cumbersome for playing audio CDs. I tend to install Rhythmbox, which offers a less intimidating interface for audio CD playback. Note that because Rhythmbox is not a native KDE application, it does not show up here as an option.

Security Features: In Kubuntu 10.10, as with Ubuntu (10.10), ufw is in the inactive stateful tracking mode. Ufw, the Uncomplicated FireWall, is Ubuntu’s user-friendly command line interface to Netfilter, the Linux firewall application. Other than the firewall, the AppArmor module, a kernel-space mandatory access control application, is loaded and in enforcing mode. Seven AppArmor profiles are loaded by default. You may view the loaded profiles by running sudo apparmor_status from a shell terminal. The only port open is 631, the default port for CUPS, the printing system.

Final Thoughts and Suggestions: Writing this review gave me the opportunity to use Kubuntu for the very first time. And I like it. Though KPackageKit’s interface is not as slick as the Software Center in Ubuntu, I found it a lot easier to use. The only suggestion I have for the Kubuntu team is about rekonq, the default browser. It is a decent browser, but it is not fully production ready. Until rekonq is fully ready for prime time, I think it is best to install Firefox as the default and have rekonq as the alternate.

Resources: Download an installation image of Kubuntu 10.10 from here, and read about the known issues.

Looks great, nice, cute, but still use too much resources and lags at times. Seems bulky.

Kubuntu 10.10 FTW. flawless and I used to hate that distro. it is best distro released today in my book

Seen bashing had to put my 2 cents in. guess these geeks are using old code. Kubuntu IMOP is the top Polished bugless linux operating system in existance. I will be setting up a remote Kubuntu system anyone can log into. It is absolutly flawless. I not sure why 2 posters up top have issues. Maybe there running dells? or Newbie named computers. I prefer the vendors choice built computers. A there alot more cheaper. B they out perform any computer with a name brand on it. and C there not all the marketing and sabotage built into the chips to make the branding rich. Get a clue. If your going to Run linux at its peak…Stay away from anything a non educated corperate giants is going sell, software or hardware for that matter. cause in the end there only understanding is marketing and self.

Kubuntu has a cheesy integration with the KDE desktop. I tried this version again, but, IMHO, is still too bugy for me. Please, if you like KDE, try a serious distro based on KDE, like openSUSE, Mandriva, PclinuxOS,etc…

Kubuntu is most lackluster distro runnig in the wild. Buggy, bloated and unreliable.
It boggles my mind how developers can drop balls in such spectacular way and get away with it.
Just check out its rank at Distrowatch and compare it to Lubuntu. You see! K-ubuntu is rubbish.

Sorry, spc, but I don’t know what you are talking about. With 10.10 release I tried Kubuntu for the first time (I used Ubuntu ever since I switched to Linux) and I can’t see any problems you are ranting about. In fact I’m starting to love Kubuntu even more than Ubuntu. it just looks a lot nicer, has better applications and I can customize it better. And it also brings a lot more features, especially their desktop. If all goes well for another week or two I will completely switch to Kubuntu.

Sorry but Ubuntu software center too allows queuing of applications for installation.

thanks for the review. please keep on.

Thanks for reading. Give others the opportunity of reading it by submitting it to Digg, Reddit, Stumbleupon, Newsvine, etc