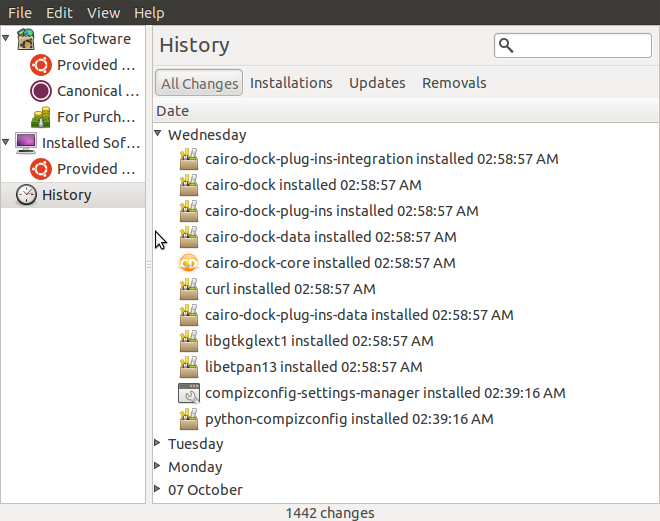 Administrative Tools: Almost all the graphical administrative tools are accessible from the menu – System > Preferences, and System > Administration. Most are part of any GNOME-based distribution.

Another useful utility is the System Testing tool (System > Administration > System Testing), which makes it easy to test and view test reports on virtually all aspects of the system. If you want to run the tests, better to run them in batches, and not with all enabled as shown below. The tests can take a long time to run, and they are interactive.

When a test session is completed, you may view the report and/or submit it to Canonical. If you choose to view the report, it will open in a browser tab or window.

Here is a section of a test report viewed on Firefox.

Media and Hardware Detection: Out of the box, Firefox, the lone Web browser installed, passed the Java test and plays Flash videos. Java handling is courtesy of the OpenJDK Java 6 Runtime Environment (JRE). Sun Java JRE is in the repository, and also in the Software Center’s list of featured applications.

Because libdvdcss is not installed, Totem, the default video player could not play encrypted DVD videos. However, by running sudo /usr/share/doc/libdvdread4/install-css.sh from a shell terminal, you can install libdvdcss and then be able to play your commercial DVD video. Rhythmbox is the default audio CD player, and it works as intended. A new addition to the list of music stores accessible from Rhythmbox is the Ubuntu One Music Store. That makes it three music stores accessible from Rhythmbox. The others are Jamendo and Magnatune.

Security Profile and Posture: The default CUPS port (631) is the only open port, and it is accessible only from the localhost, not even from other computers on the network. Ufw, Ubuntu’s user-friendly interface to IPTables/Netfilter, the Linux firewall application, is in an inactive stateful tracking mode by default. Also, there is no graphical firewall client installed (there are five in the repository).

The AppArmor module is loaded and in enforcing mode. AppArmor is a kernel-space mandatory access control application with a role similar to what SELinux plays on Fedora and Fedora-derived distributions. Ten profiles are loaded by default. You may view the loaded profiles by running sudo apparmor_status from a shell terminal.

Resources: You may read previous Ubuntu reviews and tutorials here, and download Ubuntu 10.10 Desktop here. Download the Alternate installer image if you want to install Ubuntu on an encrypted disk.