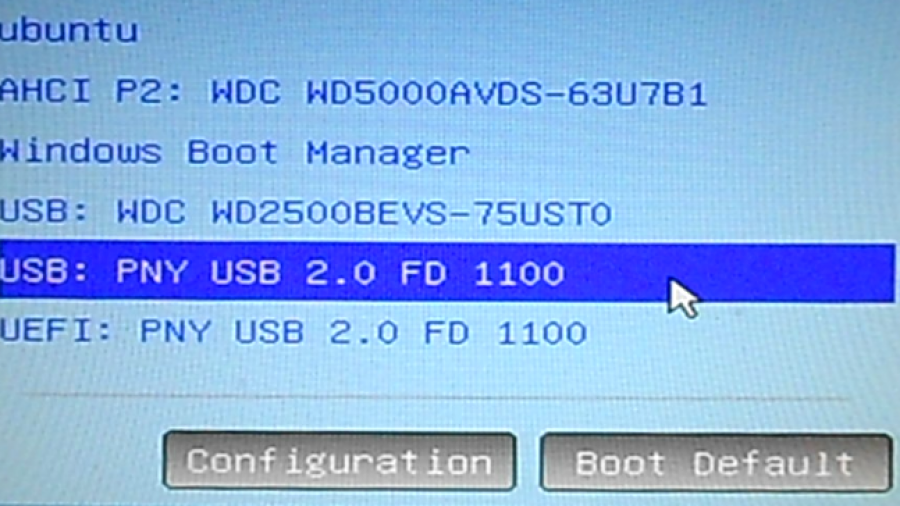 And also following from my recommendation in that article, installation will be on an MBR partitioning scheme, using the distribution’s non-UEFI-aware version of the installer.

So, if you wish to follow along, download an installation image of either distribution from here (Ubuntu 15.04) or here (Linux Mint 17.2). I used a USB stick as the installation media, but you can burn either image to a blank DVD.

Boot the computer with the installation media in place, but access the boot menu before it boots into the installer and select the entry that will boot into the non-UEFI version of the installer. As shown in in Figure 1, that entry should start with USB: 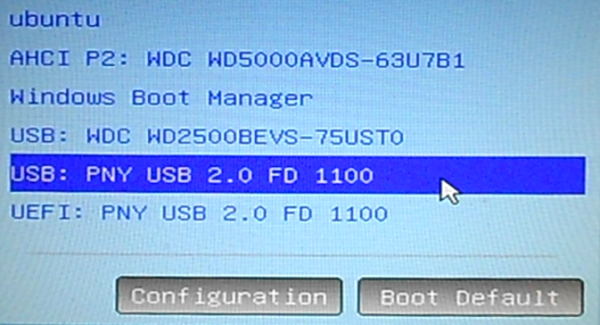 Boot into the Live desktop, and while there, launch the installer. Click through the first few steps until you get to the one shown in Figure 2. Because the computer used for this tutorial has an internal hard drive with Windows 10 and Ubuntu 15.04 installed in dual-boot fashion, the installer offered, by default, to reinstall Ubuntu. But that was not the goal, which was to install the distribution on the 320 GB external hard drive. 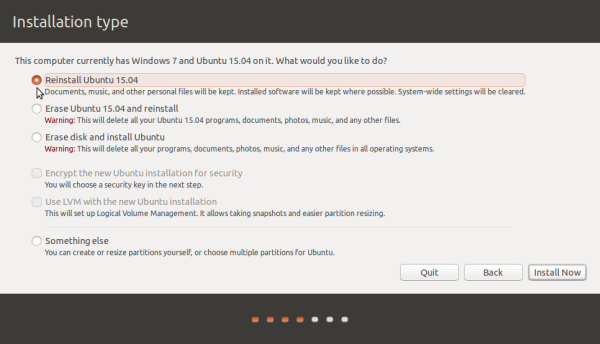 For that to happen, select the Something else option and click Continue. 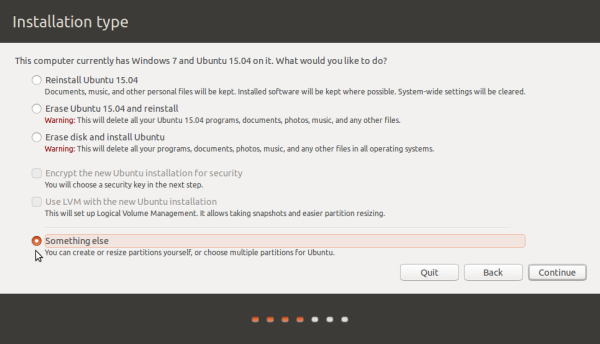 Figure 3: Selecting the “Something else” option of the Ubuntu 15.04 installer

Doing that will open the installer’s manual partitioning tool, where you’ll see all the hard drives detected by the installer and their partitions. As shown in Figure 4, the external hard drive is /dev/sdc, and it has a Windows operating system installed. Since I don’t need it, I’ll have to delete the Windows partitions so I can create partitions for the Linux distribution. If you don’t have partitions to delete, you can skip this section. 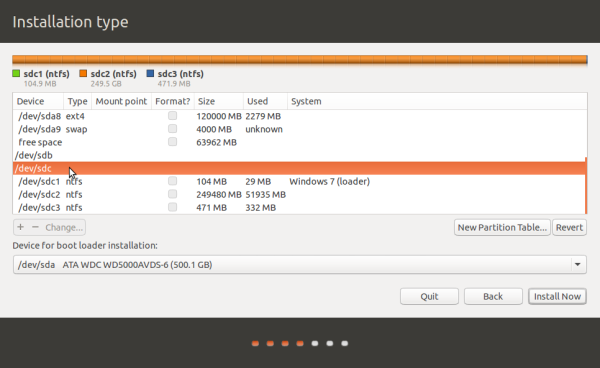 After deleting the partitions, we can now start creating partitions. Select the free space under the external drive, then click on the + button. For this tutorial, I chose to create three partitions – mounted at / (root), /home, and swap. It’s not necessary to create a separate partition for /boot, but it won’t hurt if you do. 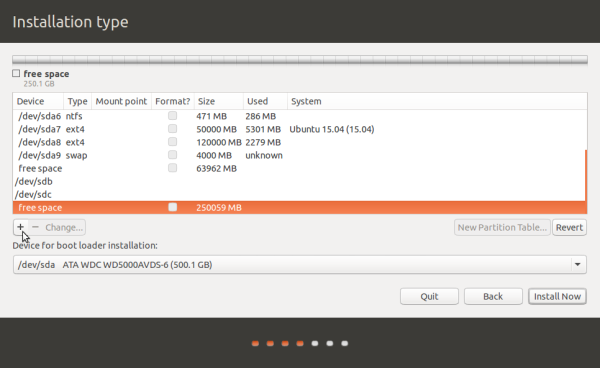 This is the installer’s partition editor. All you have to do here is specify the size, filesystem, and mount point for each partition. For the swap partition, there will be no mount point, just the first two. 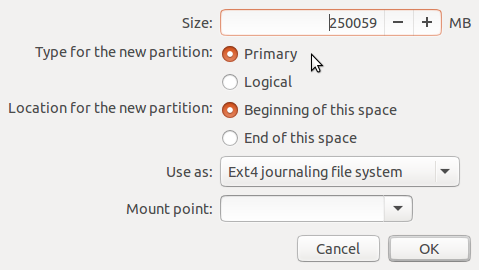 We’ll start by creating the partition to be mounted at / (root). If you intend to use the system for a long time, allocate more than 10,000 MB (10 GB) to it. Stick with the default filesystem (Ext4 journaling file system), the select the mount point as shown in Figure 7. Click OK when finished. 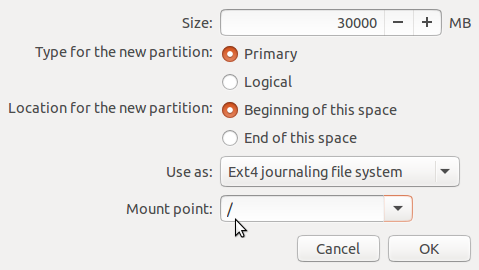 For the second partition, which will be mounted at /home, allocate as much disk space as you have to spare. This is where all your data will be stored. OK. 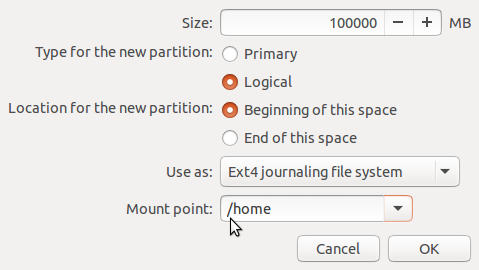 The last partition will be for swap space. A size of 2000 MB (2 GB) should be enough. Less, if you’re tight on disk space. From the Use as menu, select swap area, then click OK.

Back to the main partition tool’s window, all the newly created partitions should be listed under the external hard drive. The final task here before clicking the Install Now button, is to select the Device for boot loader installation. Since we did not create a separate partition for /boot, our best option is to install it in the Master Boot Record (MBR) of the external hard drive, which is /dev/sdc in this example. You may go ahead and click Install Now if you’re satisfied with your selection. 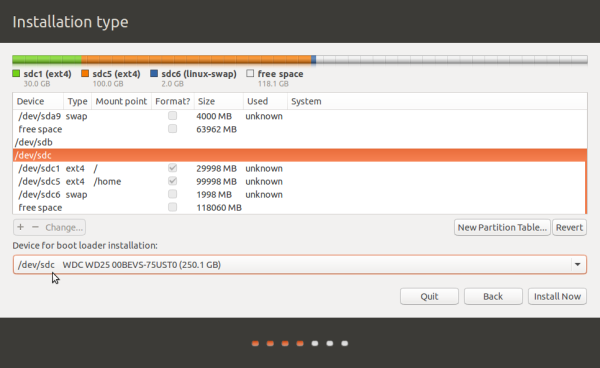 Figure 11 shows the final prompt from the installer before the partitions are created. Note that it will offer to format an extra partition that you did not specify. That partition will be the swap space of the internal hard drive. In this example, it’s /dev/sda9. Click Continue to accept.

Figure 11: Partitions that will be formatted by the installer on external hard drive

After installation, reboot into the external drive to verify that it can boot. If you look in the /etc/fstab file, you should see an entry for the swap partition of the internal hard drive. Though not necessary, you may delete it. The true test of a successful installation of a Linux distribution on an external drive is whether it will boot from a computer other than the one it was connected to during installation. So, go ahead and perform that test…