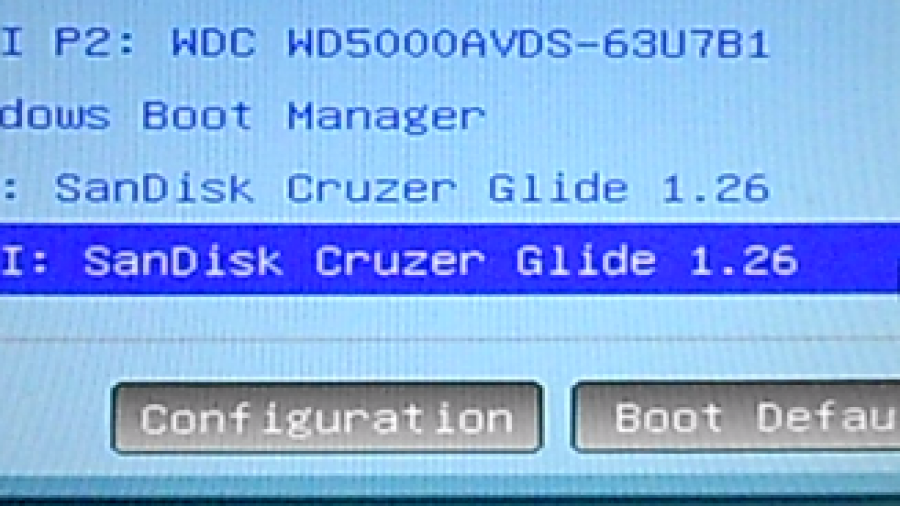 This tutorial shows how to dual-boot Linux Mint 17.2 and either Windows 10 or Windows 8.1 on a single hard disk drive and on a computer with UEFI firmware.

Two test computers were used: One is an OEM laptop upgraded from Windows 8.1 to Windows 10. The other is a self-built desktop with a fresh installation of Windows 8 Pro upgraded to Windows 8.1.

Whichever version of Windows you use, the steps will be the same. If you’re new to Linux, it’s recommended that you read A beginner’s guide to disks and disk partitions in Linux.

To complete this tutorial, you’ll, of course, need a computer (desktop or laptop) with an existing installation of Windows 10 (or Windows 8). You may choose to install your version of Windows anew.

If you have an existing installation of Windows 10, it’s best to shrink the C drive to free up enough space for Linux Mint. And if you’re installing a fresh copy of Windows, you can specify how much of the disk space you want the Windows installer to use. The unallocated space will be used for Linux Mint.

Figure 1 shows the partitions on a self-installed computer as seen from the Windows 8 computer. This was from a test installation when the C drive was reduced after installation. Notice the recovery partition at the beginning of the drive.

Figure 1: Disk partitions on a Windows 8 computer after shrinking the hard drive.

This image was taken from another test installation on the same computer as above, but when the drive was manually partitioned during the Windows 8 installation. Notice that in addition to the recovery partition at the beginning of the drive, the installer also created another one after the C drive.

In Figure 3, taken from an OEM Windows 10 computer. There are many more partitions. But like in Figure 1, the C drive was reduced to create the free space needed to install Linux Mint 17.2. 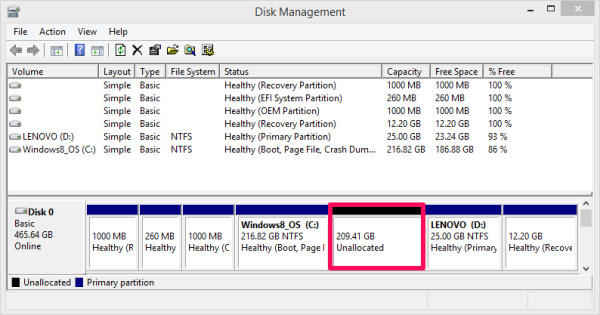 So if you have everything in place, (re)boot the computer with the installation media in the optical drive or USB port. And to be sure that you’ll be booting from the UEFI-aware version of the installer, access the boot menu as the system boots and select the UEFI entry similar to the UEFI: SanDisk Cruzer Glide 1.26 entry shown in Figure 4.

The computer should boot into the Live desktop. While there, double-click on the icon of the installer on the desktop. Then click through the first few steps until you get to the one shown in Figure 5. The Linux Mint installer will always say that This computer currently has no detected operating systems. What would you like to do? But you know that’s not true, because Windows 10 in installed on the same hard drive. 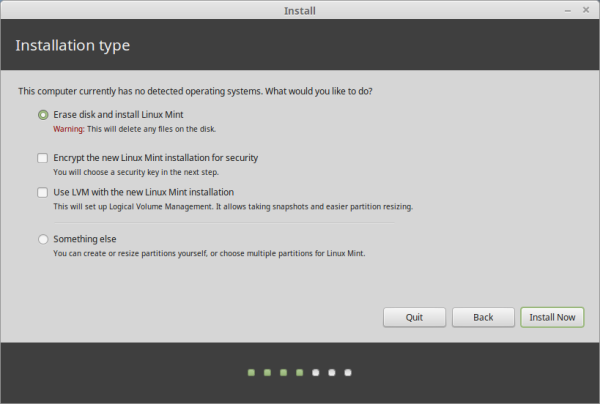 To get around that, click on the Something else option, then on the Continue button to access the installer’s manual disk partitioning tool. 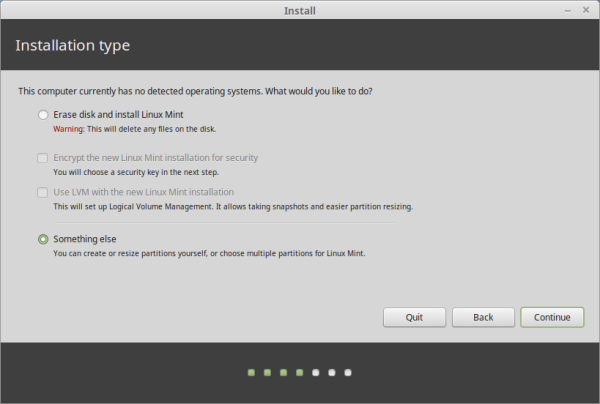 Figure 6: Selecting the manual partitioning method on the installer of Linux Mint 17.2.

If your system is self-installed, Figure 7 shows the partitions on the target hard drive as they would appear on the manual disk partitioning tool. That “free space” will be used to create partitions for Linux Mint 17.2. If this is your setup, select the free space by clicking on it, then click on the + button to start creating partitions. 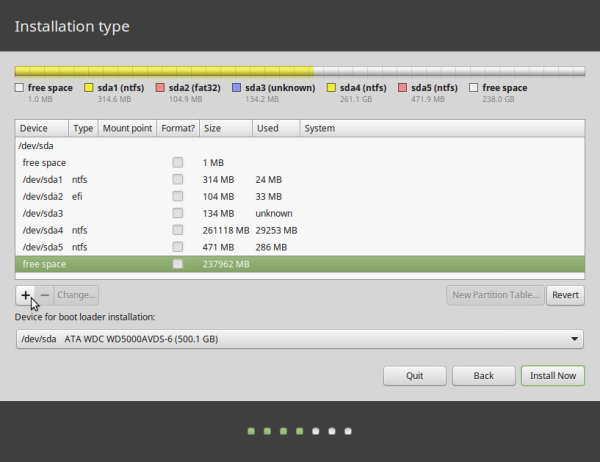 Figure 7: Existing Windows 8/10 partitions as seen from the manual partitioning tool of Linux Mint 17.2 installer. This was taken from a self-installed computer.

If using an OEM computer, Figure 8 shows how the partitions would be displayed on the installer’s manual disk partitioning tool. And as on Figure 7, the “free space”, freed up from the C drive, will be used to create partitions for Linux Mint 17.2. If this is your setup, select the free space by clicking on it, then click on the + button to start creating partitions. 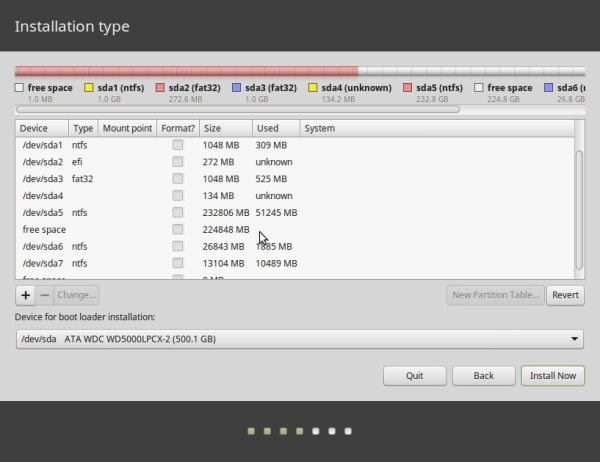 Figure 8: Existing Windows 8/10 partitions as seen from the manual partitioning tool of Linux Mint 17.2 installer. This was taken from an OEM computer.

This is the installer’s disk editor’s window. All you’ll have to specify here, is the size of the partition, the file system to use, and the mount point. For all the partitions except the one that will be used for Swap, stick with the default file system, which is Ext4 journaling file system. 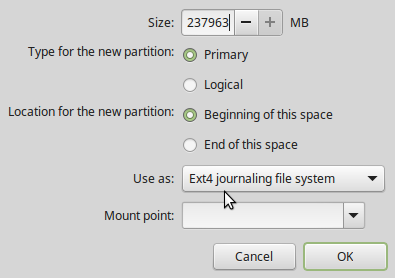 The first partition we’ll be creating will be for root. The recommended disk space for installing Linux Mint 17.2 is about 9.5 GB, so be sure to allocate at least that amount. If you’re installing a system that you’ll be using for some time, the more disk space allocated to root, the better. In this example, 50 GB (50,000 MB) was allocated to it. After specifying the size, select the mount point as shown in Figure 10, then click OK. 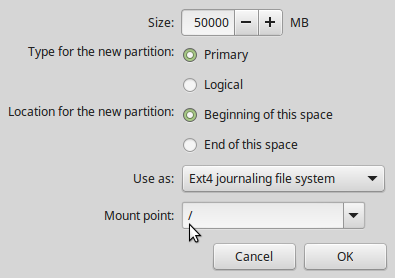 If you have enough disk space to create a separate partition for /home, allocate most of the available disk space to it, and select /home as the mount point. OK. 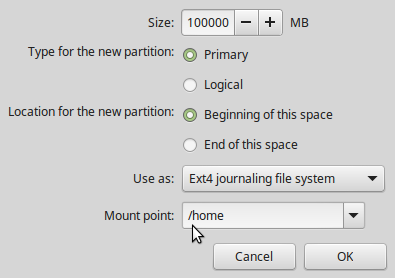 The last partition will be for Swap. On a 64-bit system, 4 GB should do, if you have disk space to spare. Be sure to select swap area from the “use as” menu, then click OK. 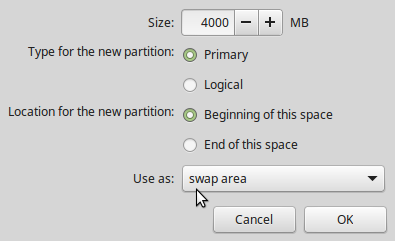 With all the partitions created, they should all be listed as shown in Figure 13. 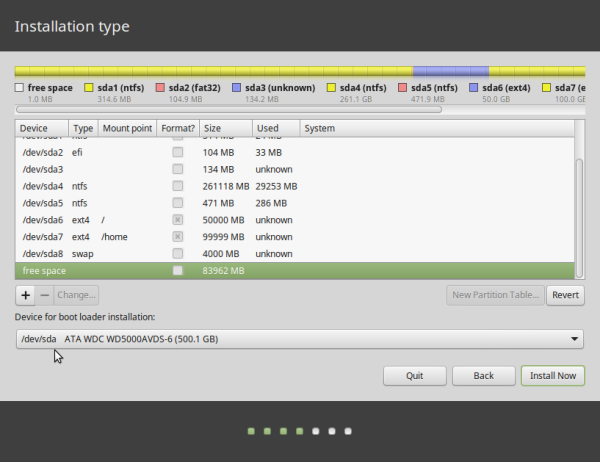 This is how they will be listed on an OEM computer. 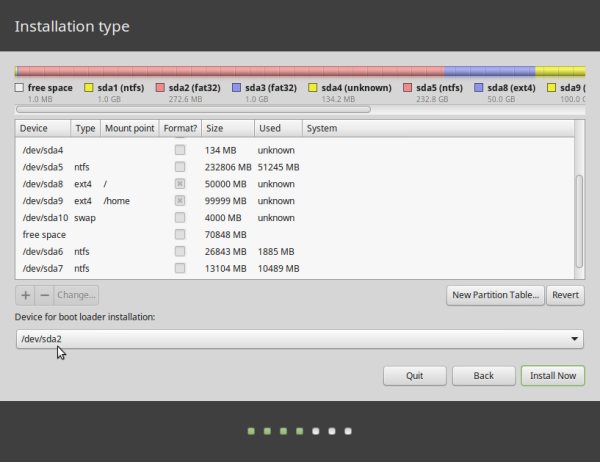 Whether on a self-installed or OEM computer, the last task to accomplish before clicking Install Now, is to select the Device for boot loader installation. That device is your Boot EFI Partition. In most cases, it’s /dev/sda2. If in doubt, look for the partition of Type efi. That’s the Boot EFI Partition 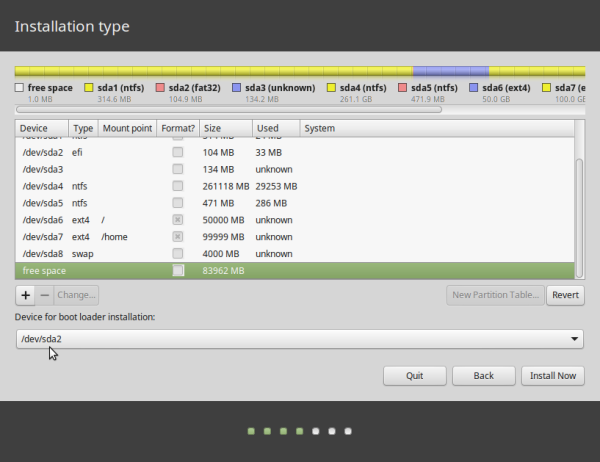 Figure 15: Selecting the EFI boot partition as the device for boot loader installation on Linux Mint 17.2.

After installation and reboot, the computer should boot into Linux Mint 17.2. And you should be able to boot into Windows by selecting the entry for its boot manager on the GRUB menu.