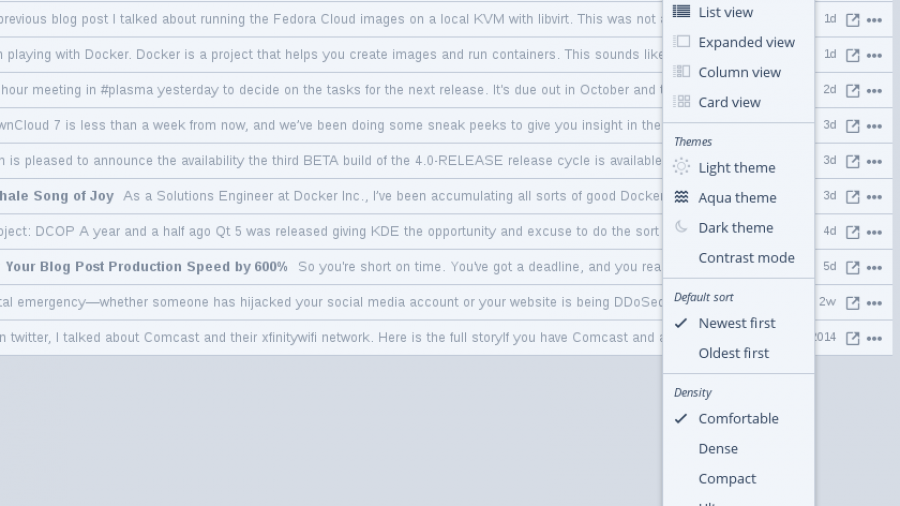 Over the years I’ve used a variety of local, 3-party and self-hosted RSS Feed readers. My preference has always been self-hosted RSS readers, chiefly because the local clients available (Akregator and Liferea) were not that good and I was never a fan of Google Cloud services (Google Reader when it was still active).

At one point I got tired of maintaining a self-hosted RSS reader that I switched back to Akregator (the default RSS client for KDE), then to Liferea. Both are decent applications, but with more than 1300 RSS Feeds, searching was a pain, so I kept my eyes open for a suitable third party Feed Reader.

When Google Reader was revived as The Old Reader, I gave it a try but was not terribly impressed. Plus the number of Feeds supported at the free tier level (up to 100) is way below what’s in my OPML file. I also did not feel like paying for such a service, so The Old Reader’s paid service and something like Newsblur were out of the running.

So I kept using Liferea until I came across Inoreader. I tried it for a week before I decided that it was what the doctor ordered. It has a paid option, like The Old Reader, but the free tier has no restrictions on the number of Feeds, so I don’t have to bother about upgrading. It also has social features that I didn’t need, so I turned them off.

The interface is clean and offered more than one method of reading entries. So I’m pretty happy with Inoreader and hope that the free tier keeps supporting an unlimited number of feeds. If you’re looking for a good 3-party-hosted RSS Feed reader, give Inoreader a shot. By the way, Inoreader is provided by a company called Innologica Ltd, which appears to be based in Bulgaria.

The following screenshots show the main interface of Inoreader. It really should be one image, but I had to split it into two to show more detail. 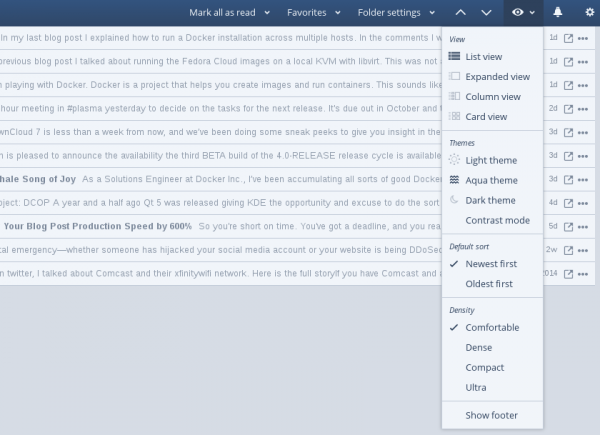