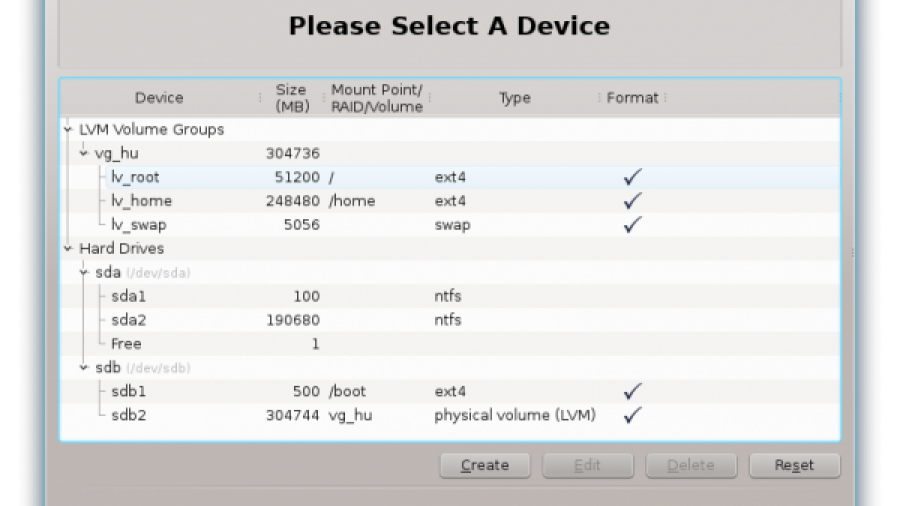 This article offers a step-by-step guide on how to dual-boot Windows 7 and Fedora 17 on a computer with two hard drives, with Fedora 17 installed on an LVM partitioning scheme. LVM, the Linux Logical Volume Manager, is the default disk partitioning scheme in Fedora 17, but disk space allocation to the logical volumes could be better.

Take the image below, for example, which was taken from a test installation of Fedora 17 KDE. It shows the default disk space allocation to the logical volumes. You can see that there are two primary partitions, one of which is a boot partition (/dev/sdb1) and the other (/dev/sdb2), the LVM Physical Volume. In addition, there are three logical volumes (see the top of section of the image). They are: lv_root, lv_home and lv_swap. Notice that there are no free space available. 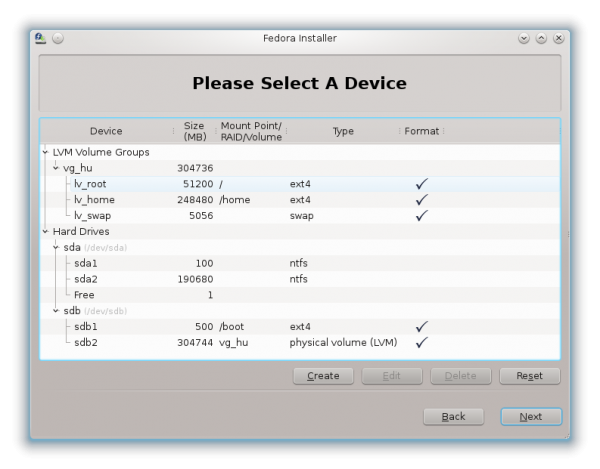 The point of this tutorial, then, is to show how to dual-boot Fedora 17 and Windows 7 on a computer with two hard drives, with proper disk allocation to the logical volumes. Because the installation process is the same across all the Fedora 17 editions, this tutorial can be used to set up a dual-boot system between Windows 7 and Fedora 17 (main edition), which uses the GNOME 3 desktop environment, or any of the Fedora 17 Spins.

After the installation has completed, the computer will always boot into Windows, since it is installed on the first hard drive. At that stage, you have two options, if you want to be able to boot into Fedora: Change the default boot disk to /dev/sdb in the BIOS, or add an entry for Fedora in Windows 7’s boot menu. Because Fedora’s installer automatically adds an entry for Windows 7 in GRUB’s boot menu, using the first method requires very little effort; no additional software installation is required. The second method involves installing a special program on Windows 7. From experience, the second method is not necessary, so the recommendation is to use the first method.

If you have not done so already, download an installation image of Fedora 17 from here. Transfer it to a suitable media and boot the computer from it. Start the installer and click through the first steps until you get to the one shown in the image below. Select Basic Storage Devices, the click Next. 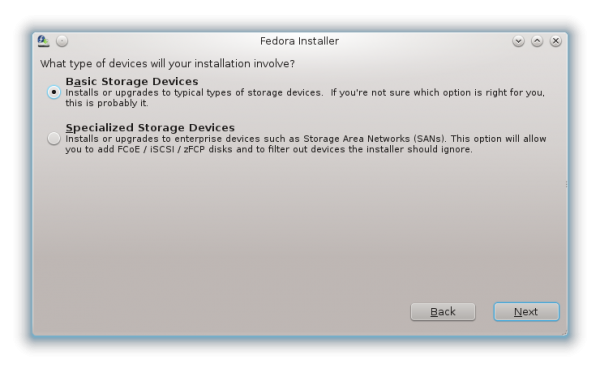 Because the hard drive that will be used for Fedora will be partitioned manually, select Create Custom Layout. Next. 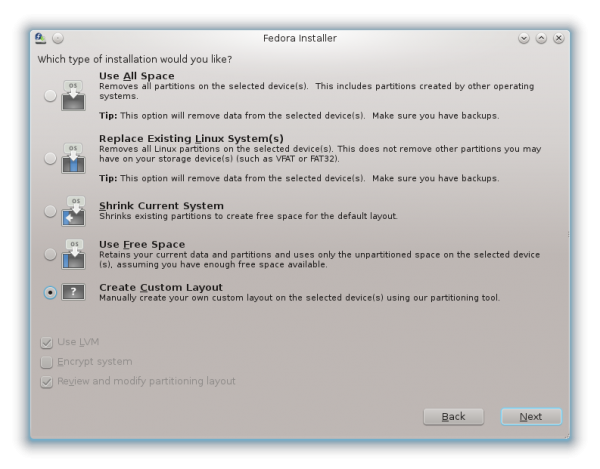 Selecting Create Custom Layout and clicking Next in the previous step should land you in the window shown in the image below, where the disks and partitions connected to the computer are listed. At the top of the list is sda, where Windows 7 is installed. You do not want to mess with that one. Any action you take here MUST be on sdb, the target disk for Fedora 17. If there are existing partitions on it, as in this example, delete them. You do that by selecting each partition and clicking Delete. Again, be sure that you are not messing with any partition under sda. 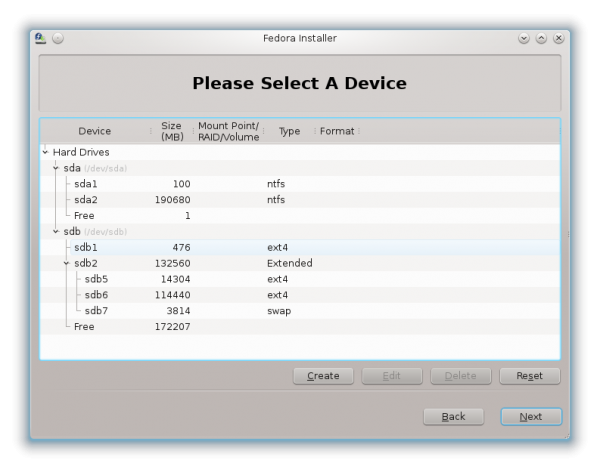 After deleting the partitions under sdb, select the free space and click Create to start creating partitions. You will be presented with the window shown here. The default option on this window is Standard, which is what we want. Click Create. 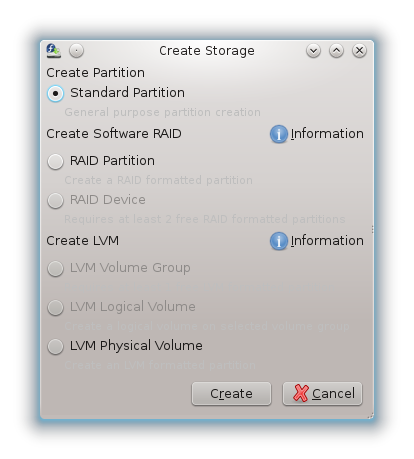 On the next window, shown here, there are three options that we have to modify. They are: Mount Point, File System Type, and Size (in megabytes). For the boot partition, the mount point will, of course, be /boot. While the default file system type on Fedora and virtually all Linux distributions is Ext4, there are other options. However, you do not have to bother about them. Aside from physical volume (lvm) and swap, which we will be using further later, you do not need to bother about the rest, at least for this tutorial. 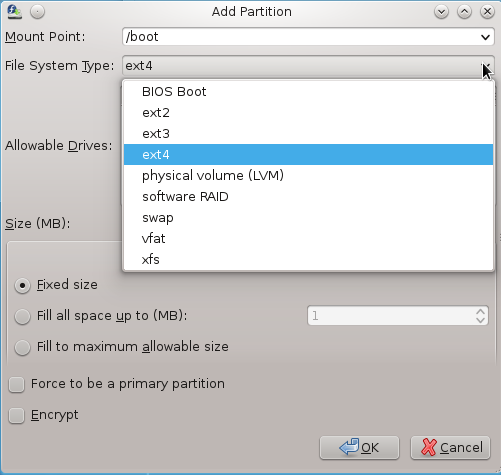 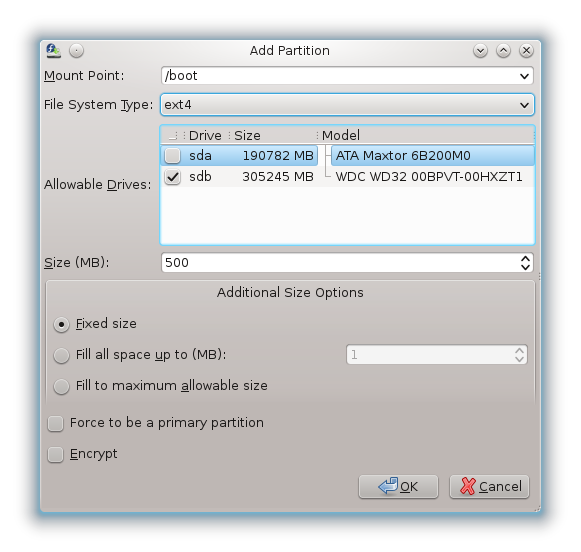 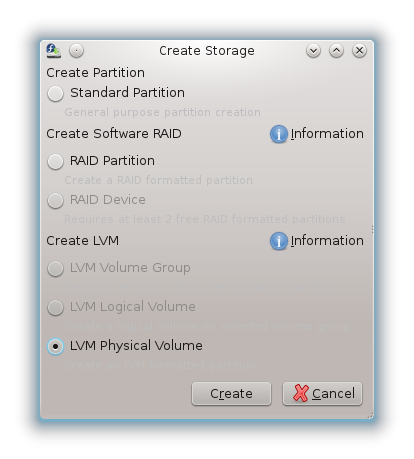