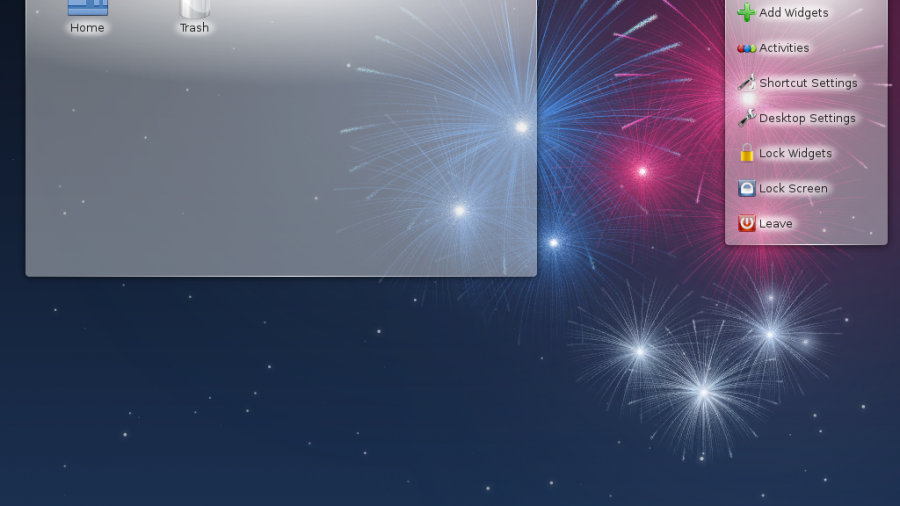 Fedora 17, code-named Beefy Miracle, is the latest release of Fedora, a Linux distribution sponsored by Red Hat, Inc. Though the main edition uses the GNOME 3 desktop environment, the Fedora Project offer Spins that use other major desktop environments.

So aside from the main edition, there are Spins that use KDE, LXDE and Xfce. And besides the Spins for those desktop environments, there are special-purpose Spins, such as the Security, Games, Electronic-Lab, Design-suite, Scientific-KDE, SoaS and Robotics Spins.

For the main edition and for each Spin, there are installation images for 32- and 64-bit architectures. This article presents a review of the KDE Spin, using a 32-bit installation image on real hardware and in a virtual environment.

Like other distributions, Fedora’s boot menu gives you many options, one of which is Boot from local drive. The problem with that option is that it does not work. Attempting to boot the computer using that option invariable leads to an error message like this:
Booting from local disk…
FATAL: INT18: BOOT FAILURE

And I have been writing about this error since Fedora 15. 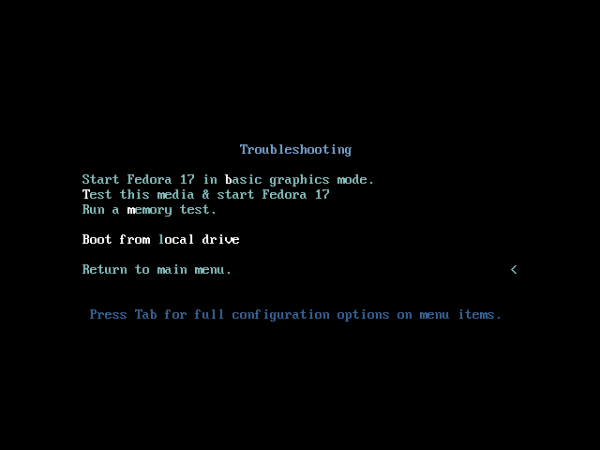 Other than for a minor change, Anaconda, the Fedora system installer, is still the same that we saw in Fedora 16. LVM, the Linux Logical Volume Manager, is still the default disk partitioning scheme. 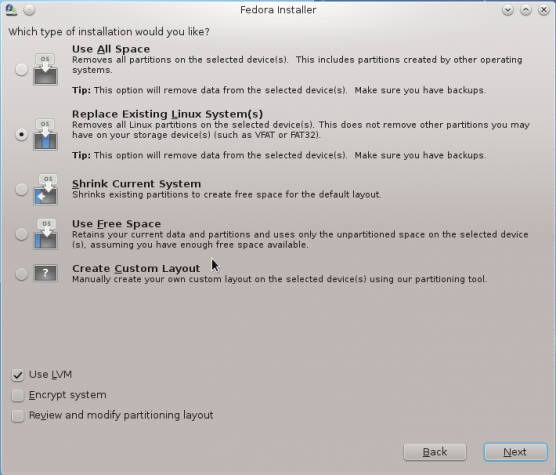 And this image shows the partitions that Anaconda creates by default. Notice that unlike the Fedora 16 version, GPT (GUID Partition Table) is no longer the default. That is why you see the first partition (sda1) as a standard partition mounted at /boot. If it were using GPT, the first partition would have been a bios_grub partition of about 1 MB in size. Aside from that, Anaconda still has support for disk encryption (not the default) and boot loader password protection. New in Fedora 17, is support for file systems larger than 16 terabytes when using ext4, the default file system. A new installation of Fedora 17 KDE uses about 3.5 GB of disk space. 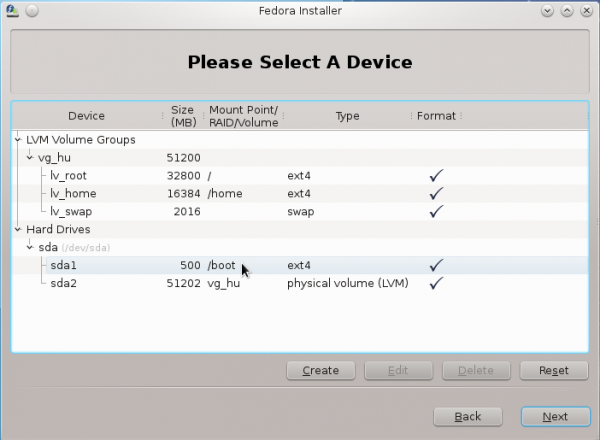 Fedora 17 KDE is powered by KDE 4.8.3. The default desktop, which uses the Kickoff menu, is shown below. 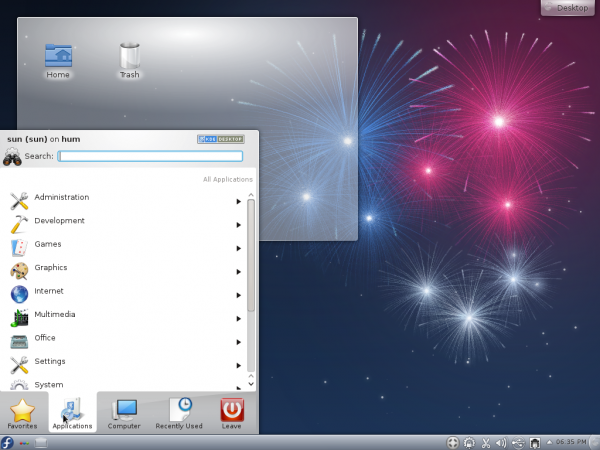 Beefy Miracle was supposed to have shipped with many new and updated features for desktop and enterprise users. However, not all made it. For example, Firewalld, which was supposed to be the new firewall configuration utility, did not ship (more on this further down). One feature, among many, that did ship, is password quality checking, which addresses the needs of both desktop and enterprise users. It helps users and administrators set strong account passwords. The quality of passwords can be tweaked by modifying the pwquality.conf file in the /etc/security directory. So one thing you will notice when attempting to set a user account password, is that the message is no longer of plain-vanilla this-password-is-too-weak variety. Instead, depending on the password specified, you might get the type of message shown in this image. The defaults in pwquality.conf are good enough for most users, but the truly paranoid can modify that file as much as they want.

Every Fedora release tends to have more updated and new features than other distributions, but it still manages to require a lot more tweaking to get it to the user-friendly state. And that has more to do with the project’s philosophical stance on software licensing than on any other factor. So a default installation of Fedora 17 KDE has just enough software installed to get you started. Getting the system to the point where it can do what you need it to, that is, the user-friendly state, requires a lot of customizations, which means adding extra repositories and installing software you need from those repositories.

To give you an idea of what you will need to add, here is a short list of essential applications that are not installed or available in the default repositories: Adobe Flash plugin, libdvdcss (needed to play encrypted video DVDs), audio libraries required to play mp3 files, etc.

For major applications, Konqueror, the native file and Web browser for KDE, is the only Web browser installed. Konqueror is a very powerful software, but as a Web browser, it sucks more than any other. The curious thing is that Firefox 13 is in the repository, but not installed. Given that Firefox is open source software, why is it not installed? For office productivity applications, Calligra 2.4.1, an office suite forked from KOffice, is the installed office suite in Fedora 17 KDE. If you are used to LibreOffice and OpenOffice, Calligra’s interface takes getting used, but it offers just about all or most of what you need in an office productivity suite.

For applications that you need to install or remove from the system, the graphical package manager that makes it easy is called Apper, a KDE interface for PackageKit. Compared to other graphical package managers like Linux Mint‘s Software Manager, Ubuntu‘s Software Center and Deepin Software Center, Apper looks neglected, even though the version installed in Fedora 17, Apper 0.7.2, was released in May (2012). But Apper works, and it tends to be fast, too. It is the interface that could use some modernization. 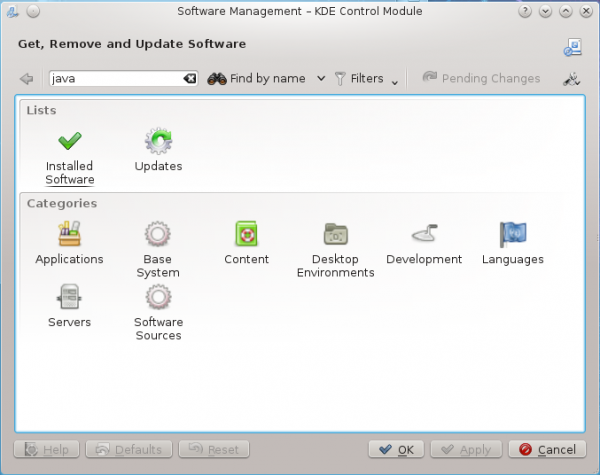 Out of the box, the system is configured to check for updates daily. This image shows a partial list of available updates on a test installation used for this review. 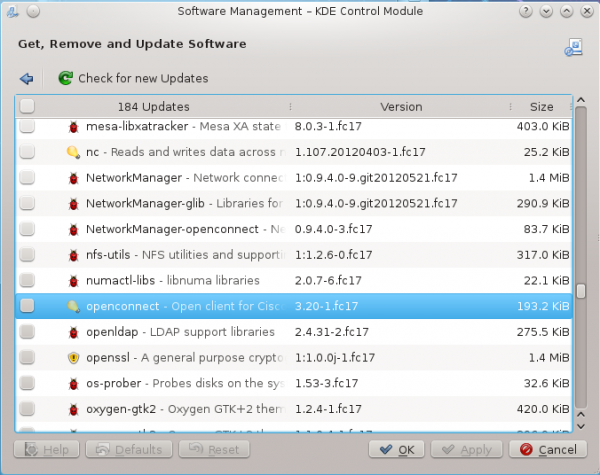